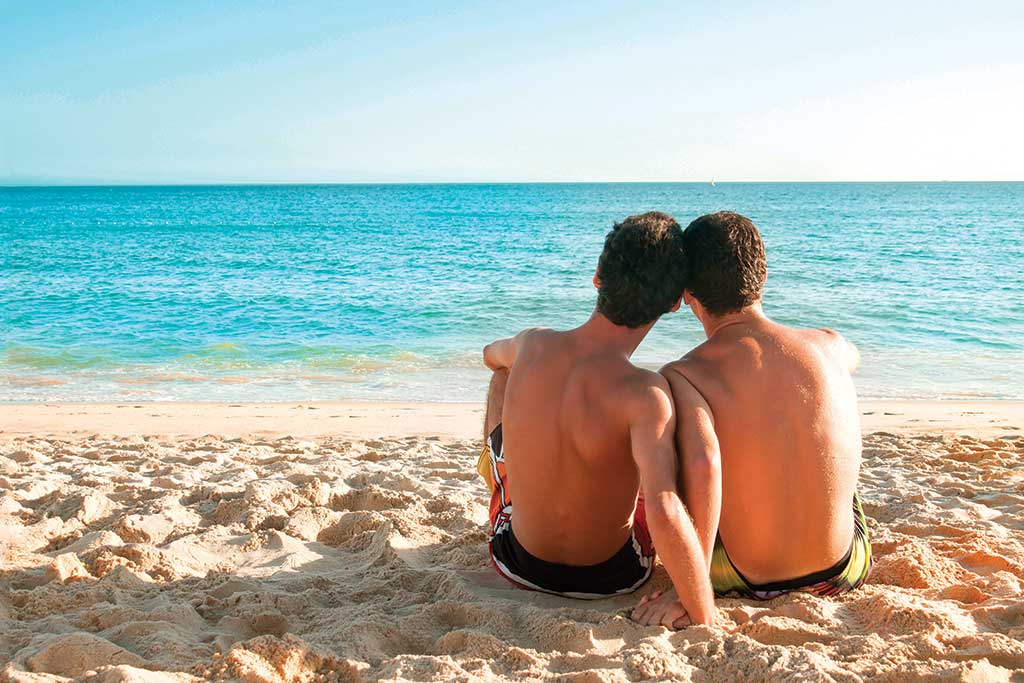 Wreck Beach is an unspoiled, four-mile haven on the coastline, the largest naturist beach in North America and only 15 minutes from downtown Vancouver.

PORTUGAL
Beach 19, Lisbon
Beach 19 in Lisbon is legendary. Though, it’s rare that anyone outside Portugal has heard of it. The modest, European city doesn’t have the allure of Paris, the ancient history in Rome, or the world-class hotels of Madrid, where most vacationers flock. But Lisbon is Europe’s favorite underdog, and it’s a dynamic destination teeming with a wealth of unique activities and attractions for the gay traveler. The city, comprising seven hills, has stunning vistas, outstanding restaurants, animated gay bars and clubs, solid performing arts, and exciting neighborhoods like Bairro Alto, where locals flood the streets at night with cocktails in hand (it’s legal to drink outside). The gay scene is thriving thanks to old institutions like Trump’s Bar throwing huge festivals like Hot Season Festival, Portugal’s first annual gay and lesbian music and dance festival launched in 2015. During the warmer months between April and October, members of the gay community spend almost all their free time at Beach 19. 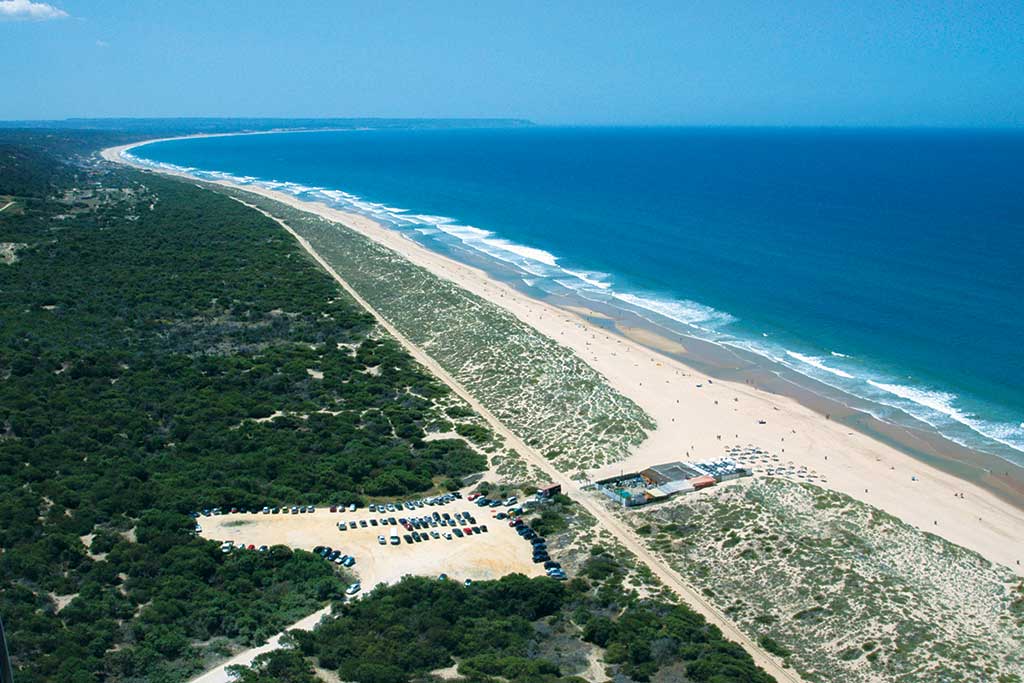 Twenty minutes outside Lisbon’s city center, Beach 19, a beautiful nature reserve, is a section of Costa de Caparica, a long stretch of coast where most locals vacation every summer. The gay community cultivated a cozy scene at Beach 19, and it’s served as an active social spot for decades. Officially a clothing-optional beach, Beach 19 is perfect for sunbathing and swimming, buying local Portuguese pastries from beach vendors, and knocking back refreshing cocktails at the bar on Beach 17.

While it’s more family friendly now, Beach 19 was initially a spot for closeted gay men to meet, and it’s still one of the top cruising beaches in the world. Here, gay men add intimate moments to their sea, sun, and relaxation, and Beach 19 will forever be known to pander to singles with a sex drive. In fact, celebrated indie film artist Antonio Da Silva produced a short film, Beach 19, which depicts the beauty of the area, as well as its cruising history.

Beach 19 takes its name from the actual stop (19) on the local train (it’s also accessible by car rental or taxi). Beach 19 is such an integral part of gay Lisbon culture that gay tour operators actually include it in their itineraries or offer full-service day trips. Lisbon Beach, a gay-owned tour operator, charges $40 for a round-trip visit. They provide beach towels, umbrellas (optional) and even a cooler with the transportation service.

Back in town, Lisbon’s dining scene is unrivaled in Portugal, where the best of traditional and modern Portuguese restaurants can be found in winding, cobblestone streets, particularly in and around the Bairro Alto. 100 Maneiras is a must, specifically for its fantastic tasting menu and Portuguese wines to match. The unforgettable dishes range from salt cod to lamb tenderloin, but wine lovers come for the expert varietals alone. The restaurant is small and intimate, making reservations necessary.

Stay at Four Seasons Hotel Ritz, a five-star hotel with full-service spa, heated pool, panoramic city views from the rooftop, and a convenient location just steps from all the action. 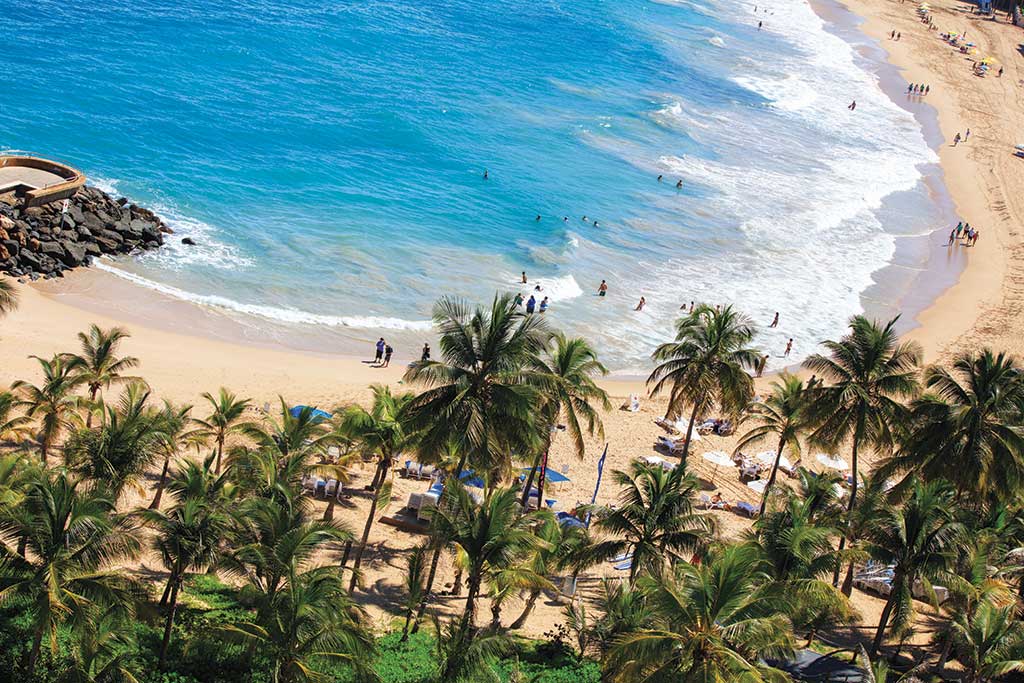 PUERTO RICO
Condado Beach, San Juan
Some of the most beautiful islands on the planet float amid the Caribbean Sea. In fact, the sugary-white beaches, turquoise waters, and clear skies here may just be the screensaver on your computer. Caribbean islands are famously idyllic and laid back with little to do other than immersing in the tropical landscape, dining on fresh seafood, and spending entire days on sun-soaked beaches. One of only two Caribbean destinations that are US territories, Puerto Rico flaunts it all with the added bonus for gay travelers of capital city San Juan’s wild nightlife and thriving gay culture. In fact, Puerto Rico is one of few Caribbean islands that hosts an annual gay pride parade and has openly gay-owned businesses, and it’s all centered in and around San Juan.

Gay travelers make a beeline to Condado, a wonderful neighborhood that hugs the sea and the main pulse of the gay scene. On Calle Vendig, locals and visitors crowd Condado Beach, the designated gay beach at the corner of Vendig, lively with outdoor cafés, gay-owned restaurants like Oceano (a chic, alfresco restaurant that serves excellent, Caribbean-inspired dishes as well as local staples like mofongo), hilarious drag shows, and live DJs around sunset. Don’t expect a secluded beach retreat in the middle of nowhere. Condado just happens to be a tiny slice of tropical paradise in a bustling city center with high-rise hotels and condos (like Miami’s South Beach), but therein lies the allure for many beach buffs who are attracted to the best of both worlds.

The nearby Santurce neighborhood is the hip, artsy mecca for visual art and music, and it includes a throng of gay bars along Calle Condado. The ideal day for gay travelers visiting San Juan is tanning, lunching, and cruising at Condado Beach, then ending the night at an epic gay party in Santurce, especially at Circo Bar. Night owls pack the gay nightclub comprising two dance floors (with go-go dancers), and it’s not uncommon to stay out until the sun rises.

Gay travelers shack up at Condado Vanderbilt, a legendary hotel that’s approaching its centennial (it opened in 1919). Known for its Spanish Revival architecture, impeccable service, and enormous suites, the five-star hotel is a short stroll from the gay hub. Gay travelers also book La Concha Resort, literally around the corner from Calle Vendig. Part of Marriott’s Renaissance Hotels, La Concha is practically on the gay beach with ocean-view, contemporary rooms, and even an LGBT ambassador on property. It’s not unusual to end up at the lobby bar for a nightcap. 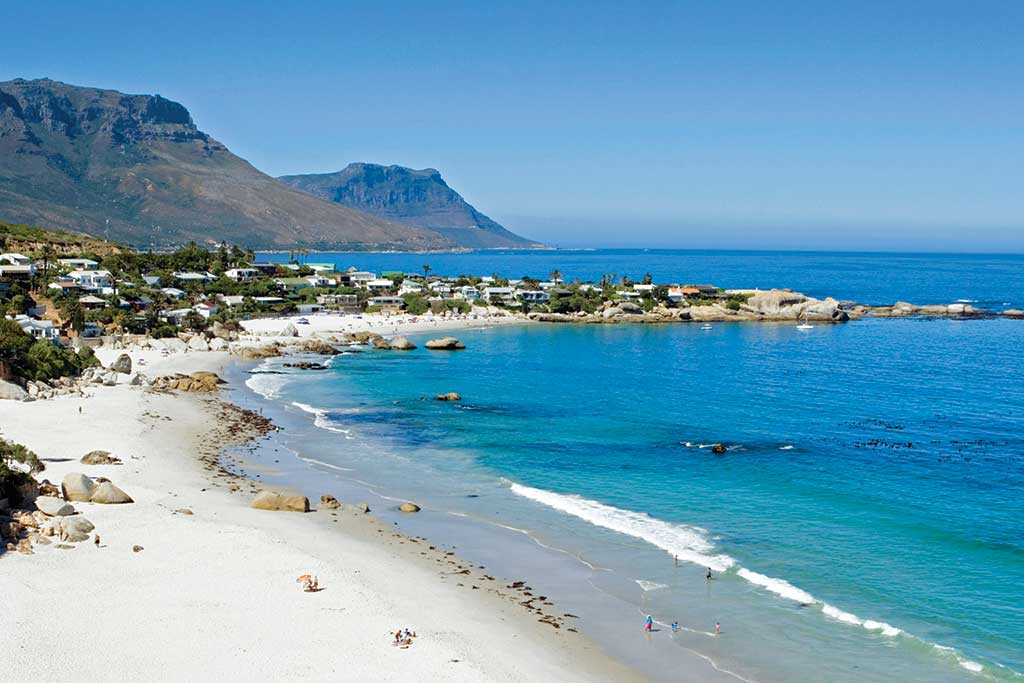 SOUTH AFRICA
Clifton Beach, Cape Town, South Africa
The oldest city in South Africa, Cape Town is unarguably the most beautiful in the country. Table Mountain, a UNESCO World Heritage Site, provides commanding views from any vantage point; gorgeous white-sand beaches sprawl with romantic sunsets; and majestic vineyards set the scene in the romantic wine valley. With a dynamic cosmopolitan pulse, Cape Town is also one of the most progressive, gay-friendly destinations on the continent (South Africa was the first country in the world to constitutionally outlaw discrimination based on sexual orientation, and the first country in Africa to legalize same-sex marriage in 2006). Gay visitors fully explore the impressive gay neighborhood, De Waterkant, brimming with clubs, bars, bathhouse, and cafés.

With Cape Town’s effortless, natural beauty, you can only imagine the allure of the beach towns, and Camp’s Bay and Clifton Beaches are the most prominent beaches in Sea Point. Clifton’s Third Beach (as it’s the third beach of the numbered beaches at Clifton) is the gay beach in one of the most affluent towns in Cape Town. Here, the sandy-white beach and commanding sky-blue waters are flanked by natural rock formations, making it one of the most breathtaking gay beaches in the world. Most couples frolic here under the sun, catching the South African sea breeze, and later snuggling up at Sandy Bay, the official nude beach.

Stay at 12 Apostles Hotel, a posh, 70-room boutique property right in Camps Bay. The award-winning spa is literally inside a cave, and the restaurant is one of the city’s best dining outlets. If you want to make a dramatic entrance, opt to arrive via helicopter, one of the splashier ways to check-in thanks to their helipad.

Back in town, gay men head straight to Beefcakes, the South African version of Hamburger Mary’s, where bartenders are shirtless, cocktails are huge, and nights are wild with sexy South Africans (those accents are to die for). If you’re in it to win it, end the night at Crew bar, a popular gay club with two dance floors, hunky staff, and raging twentysomethings who dance like it’s their last night on earth.

The beauty of Cape Town’s dining scene is that spectacular views abound, and “bay views” are an understatement at Harbour House Kalk Bay. The award-winning, elegant restaurant is built literally on the breakwater, so diners have unobstructed views of the bay and the mountains, while gentle waves crash just several feet away. From within the romantic dining room with floor-to-ceiling windows, it’s common to spot Humpback and Southern Right whales emerge from the sea, fully enhancing the dining experience.