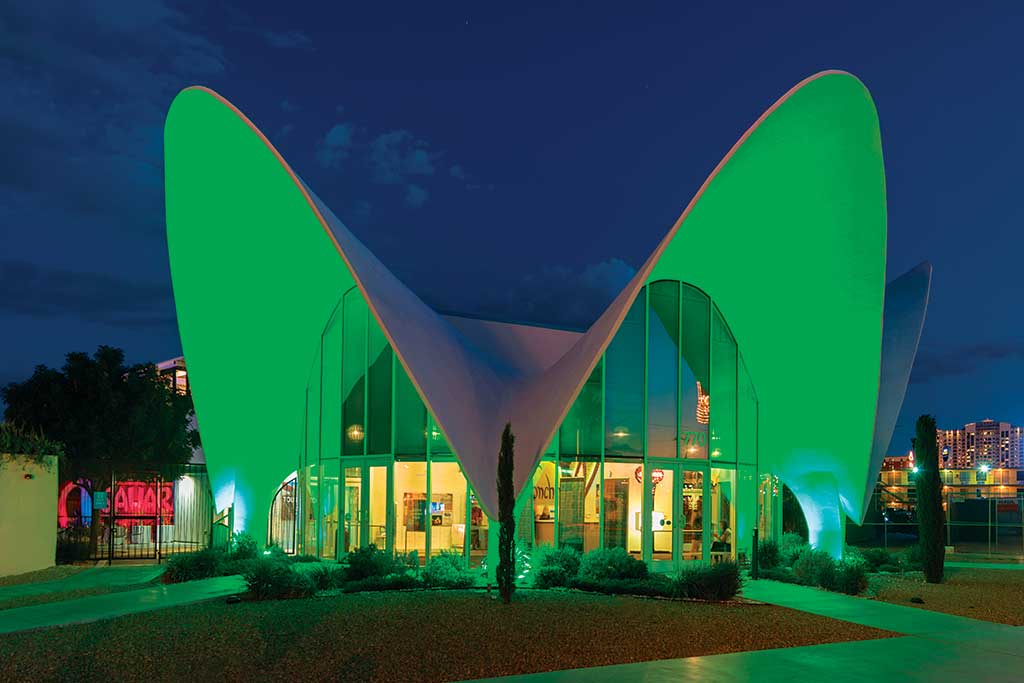 If design’s your high card, here are some of the absolute musts to check out when in Las Vegas.

Today’s Las Vegas is not exactly the kitsch-gone-wild, pulsating lights environment that Elvis Presley and Liberace made their stomping grounds. Both on and off the Strip you’ll find eye-popping, creative, thoroughly contemporary design.

The main attraction at the popular Neon Museum (770 N. Las Vegas Blvd. Tel: 702-387-6366. www.neonmuseum.org) is a boneyard containing signage from Las Vegas’ most iconic, seminal and, in some cases, long-gone and forgotten hotels and establishments. Those include The Palms, Golden Nugget and Stardust, and walking through these snaking remains during a one-hour guided tour is an opportunity to take in classic, quintessential Las Vegas-style design. 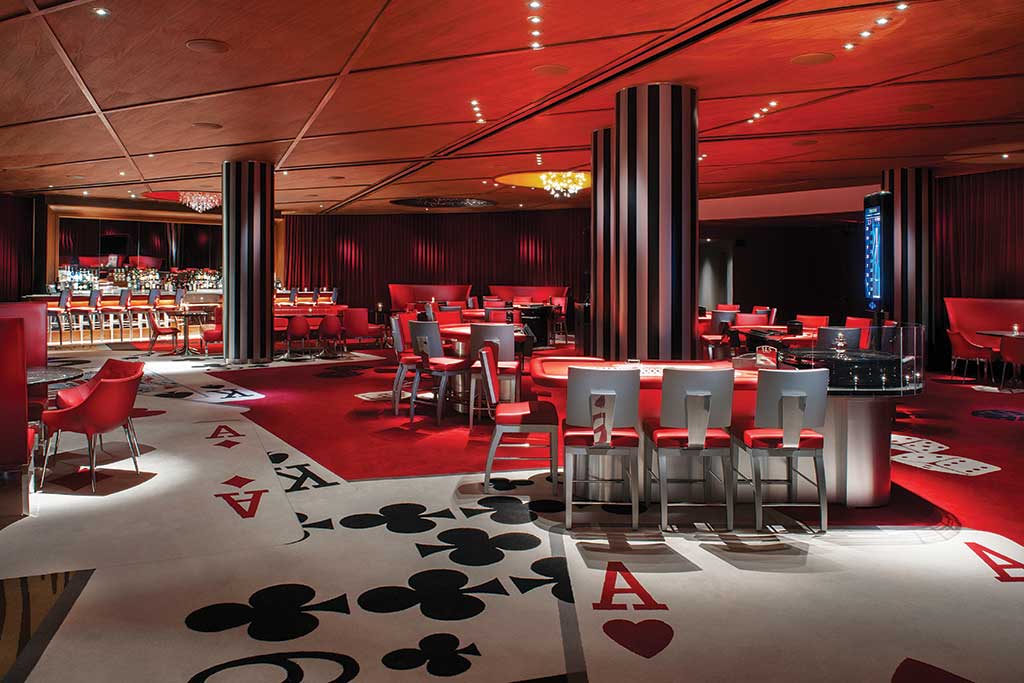 Yet, today’s Las Vegas is not exactly the kitsch-gone-wild, pulsating lights environment that Elvis Presley, Jerry Lewis and Liberace made their stomping grounds. Both on and off the Strip you’ll find eye-popping, creative, thoroughly contemporary design. The city’s five-year-old Smith Center for the Performing Arts (361 Symphony Park Ave. Tel: 702-749-2000. www.thesmithcenter.com) for one, offers theatrical productions that combine technology and derringdo beyond anything you’d see elsewhere, and buildings that add pure 21st-century international sophistication to the landscape.

Interestingly, a number of RuPaul’s Drag Race alumni have settled down in Las Vegas, drawn in part by this mix. Season eight’s Britney impersonator Derrick Barry and season nine’s Farrah Moan and Kimora Blac are among the local residents. “I mean, its not the same to be in New York or Paris,” says season three and All-Stars competitor Yara Sofia, “but at least you have a taste [of those places] and that suits me just fine.” 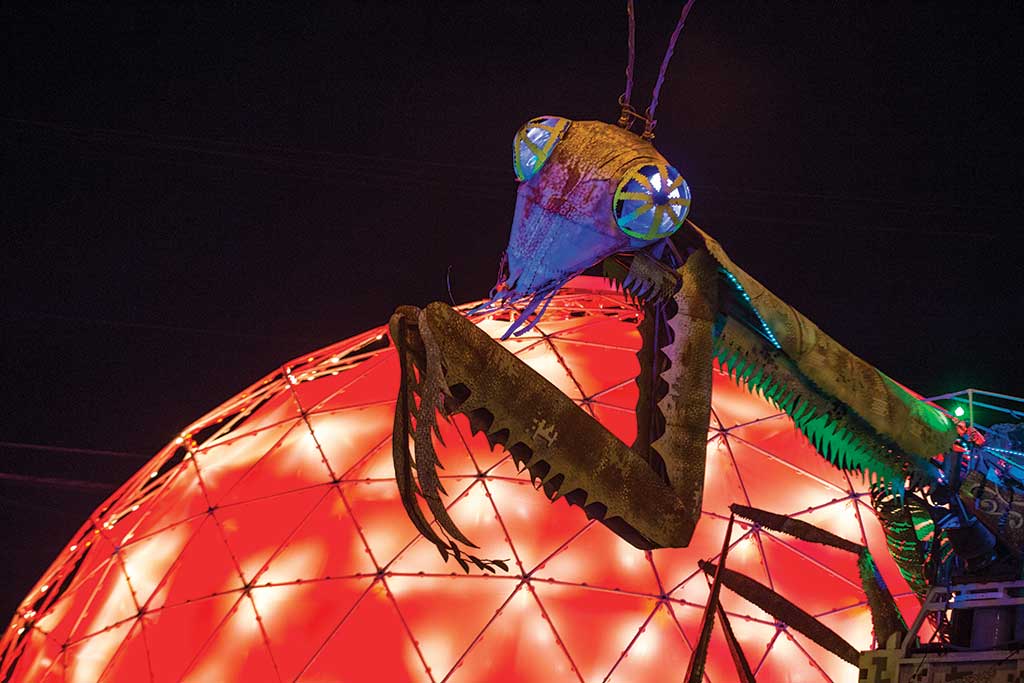 Hopefully, the gay scene will see swanky new clubs and bars crop up that are on par with the Bellagio’s Philippe Starck–designed Hyde (Tel: 702-693-8700. www.bellagio.com/en/nightlife/hyde.html), that overlooks the iconic, glowing fountains. Certainly, a growing number of global, inventive, sought-after firms are coming in to create a 21st century style for Las Vegas.

“A lot of Las Vegas is still built fast, quick, and on tight budgets,” she notes, “aiming at the lowest common denominator, which isn’t always a recipe for great design. However, there are a lot of little jewels here and there, and as the city rediscovers its value beyond cheap casinos and elaborate buffets, we expect architecture and design on a larger scale to follow. There’s definitely a fair share of great dining destinations within the casinos, and we think as the city evolves and develops, we’ll see the design approach within those spaces spread to the entire casino at large.” 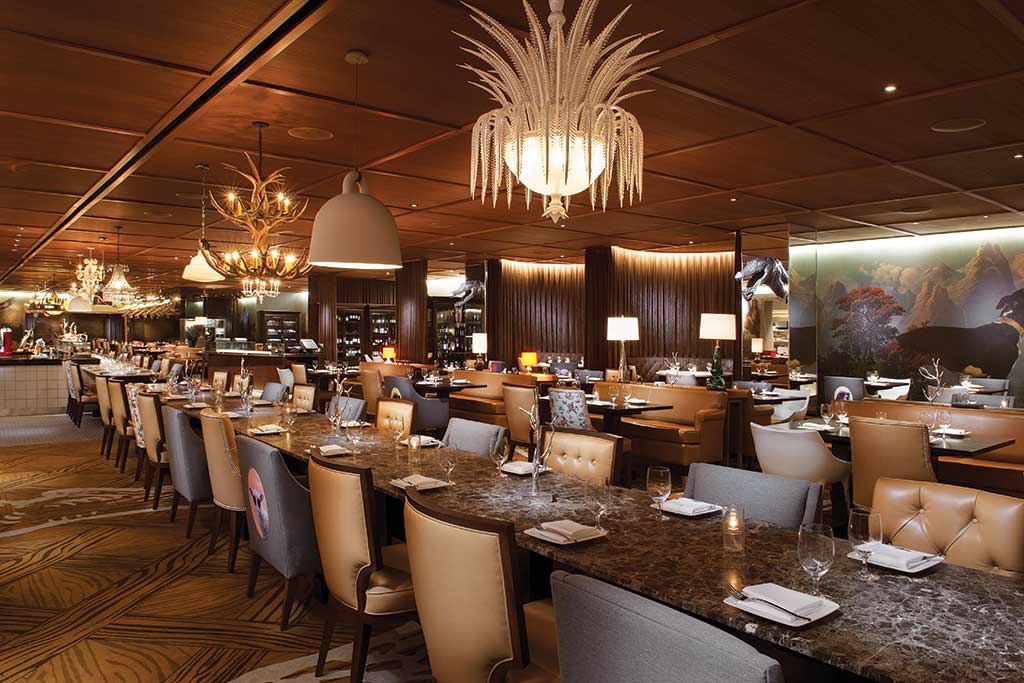 So if design’s your high card, here are some of the absolute musts to check out when in Las Vegas.

Architect Paul Revere Williams’ curvaceous 1961 La Concha Motel Lobby serves as The Neon Museum’s visitor center and entrance. The only way to see the Neon Boneyard is via a one-hour guided tour, which is offered both day and night: The collection was expanded in 2017 by an additional 30 signs to boot. Since tours can get fully booked, it’s recommended to reserve tickets in advance via its website. February saw the addition of an incredible, technology-driven “augmented reality” evening tour that features 3D sound and projections that bring 40 signs back to life (tickets cost $23 for visitors, $15 for tourists). The museum’s gift shop, by the way, is a treasure trove of mugs, shirts, and other merchandise that pays homage and recreates the logos and imagery of old-school Las Vegas casinos.

Connected to the northern side of the SLS Las Vegas Hotel & casino, just across from the convenient monorail system that weaves behind the Strip from north to south, W Las Vegas is all about playful, upscale riffs on classic Las Vegas motifs and kitsch, and is chock-a-block with Easter Egg–style and fun details compliments of AvroKO. Guestroom interiors are the handiwork of Philippe Starck, with distinctive (and expensive) hanging tapestries standing in for wallpaper and minimalist aesthetics. 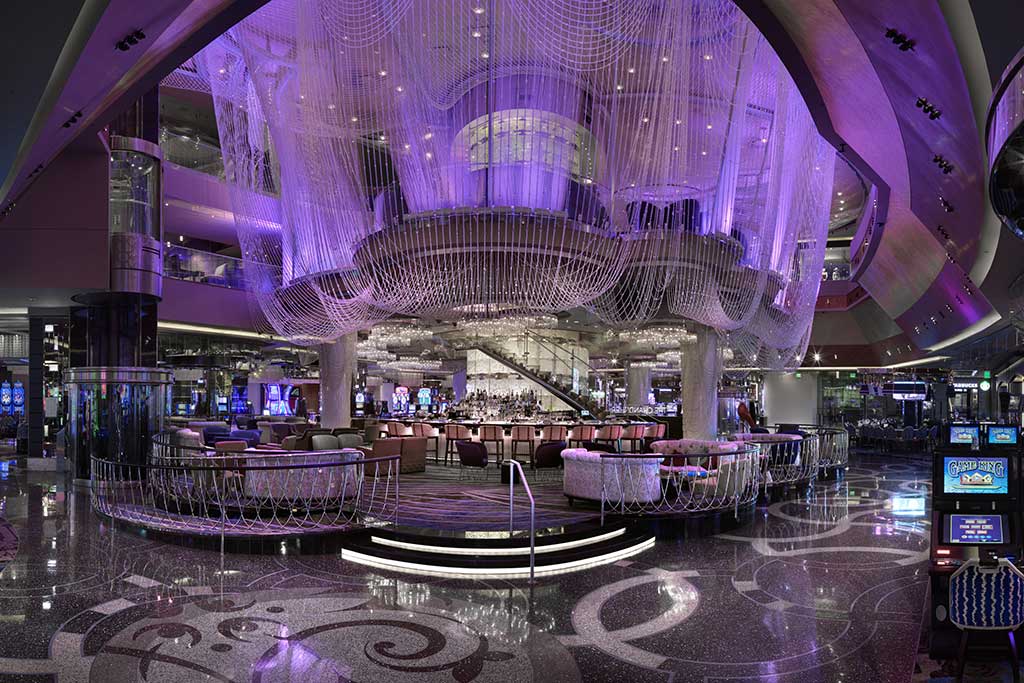 Upon pulling into the W’s dedicated entrance/valet, one can see 38,000 golden W poker chips lining the wall, while an additional 23,000 multicolored chips in the check-in area recreate the pattern of a music equalizer display. The elevator area’s playing card mural was scanned from a vintage Sahara deck purchased via eBay, and bears some scrutiny: It’s peppered with amusing Where’s Waldo-ish details ranging from the names of the designers to creepy desert critters like scorpions and rattlesnakes.

The adjacent Living Room lobby bar features translucent screens crafted from over 22,000 hand-glued orange dice, and one column’s surface is created from a craps table’s dice bumpers. Functional to boot, power outlets and USB ports are built into the furnishings for phone and laptop convenience. The Living Room’s adjacent restroom is meant to evoke a tacky Las Vegas wedding chapel, with green carpet, faux Rococo décor, and a gold-chain-wearing fortune-teller machine nicknamed Booker Glam fabricated by the same folks behind the iconic Zoltar, immortalized in the Tom Hanks movie Big. Guests receive a token good for a fortune printout, and you can choose from several categories including snarky “Prenup Advice.”

The AvroKO design team’s Greg Bradshaw notes that they were also aiming to bring in elements of the outside local desert landscape, especially with the Living Room space. “A bit of a retreat from standard Las Vegas design practice of fabricated spaces within windowless boxes,” he says. “We were really pushing for an indoor-outdoor connection, as one of the design references were modern dwellings from the 50s and 60s that embraced both desert living and intimate entertaining. One of the challenges, however, was the site and space itself, but we were able to work out a raised garden as a backdrop to the bar, which gives the entire living room a sunken feeling similar to the Lautner Hotel in Palm Springs. We also commissioned neon artist Keith Lemley to create a piece that transforms the garden to a cubist neon art piece once the natural light has faded.” 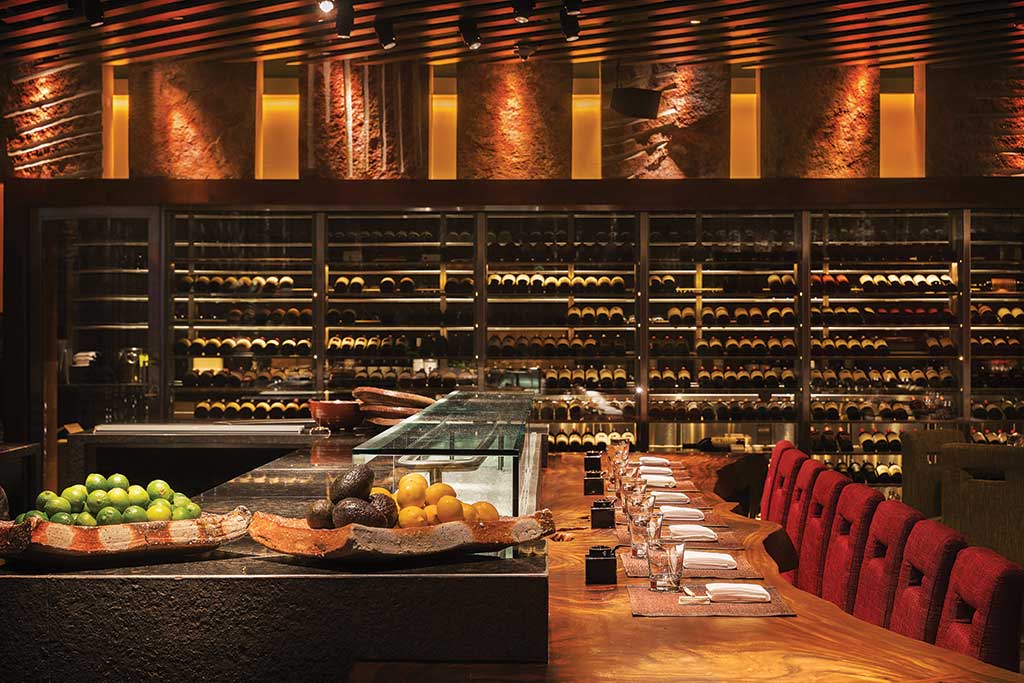 Zuma at the Cosmopolitan

The sprawling SLS Las Vegas Hotel & Casino is host to a bevy of restaurants, including chef José Andrés’ Bazaar Meat (Tel: 702-761-7610. www.sbe.com/restaurants/locations/bazaar-meatlas-vegas), its interior also the work of acclaimed, eclectic designer Philippe Starck. A fusion of molecular tapas, raw bar, and steakhouse fare makes up the menu, while quirky details, including a stuffed and mounted steer’s head wearing a lucha libre mask, and a metal alligator, inform every nook and cranny of the warmly colored, 500-person space. It feels completely removed from the SLS casino setting, barring a dedicated red-drenched dining area where you can also gamble.

The literally central, must-see attraction at The Cosmopolitan, however, is The Chandelier Lounge, which entails a massive, multi-tiered, draping crystal chandelier that cuts through the retail and dining atrium, with three distinct bar areas. Billed as a sophisticated sanctuary, the “inside the chandelier” section is quite the experience, offering a menu of deliciously inventive cocktails with molecular flourish. Mixologist Mariena Mercer’s signature Fire Breathing Dragon derives its name from nitrogen-charged raspberries that, when chomped, unleash a smoke-like effect.

Cocktails are also given the high-design treatment at The Cosmopolitan’s Zuma (Tel: 702-698-2199. www.cosmopolitanlasvegas.com/restaurants/zuma) restaurant. Opened in 2017, this latest branch of the international Japanese izakaya-inspired/sushi nirvana is just as visually dazzling in its design and culinary presentation as is found at its growing roster of sister venues (London, NYC, Hong Kong, Dubai, and Miami among them). Noriyoshi Muramatsu’s Tokyo-based Studio Glitt puts natural elements, including a petrified tree and stone, to truly cinematic use. The food and drinks are downright Instagram-able, particularly the tasty “Fish in a Bag” libation, a citrusy, herb-flecked gin and tonic with a presentation that’s meant to resemble a goldfish in a plastic bag. 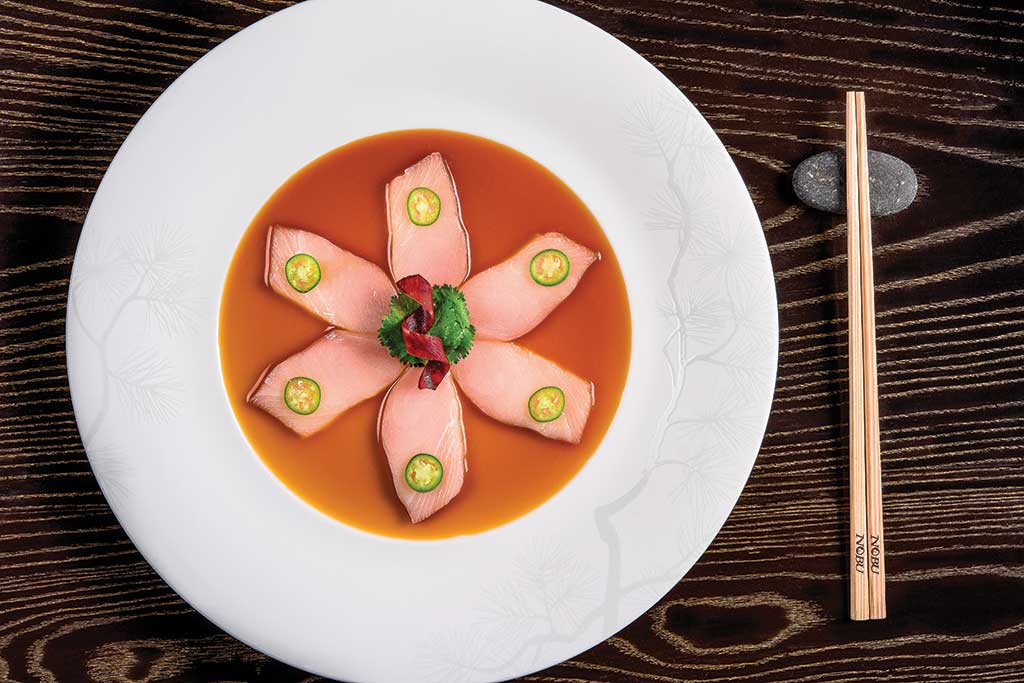 Yellow Tail Sashimi with Jalapeño at Nobu at Caesar’s Palace

Nobu (3570 S. Las Vegas Blvd. Tel: 702-785-6674. www.noburestaurants.com/las-vegas-caesars-palace/experience) at Nobu Hotel Caesars Palace is also a dazzler, and ridiculously tasty (foodwise of course). There are actually two Nobu locations in Las Vegas, but this is the larger venue. In fact, with a main dining and lounge area at over 11,000 square feet, it’s the world’s largest Nobu to date. The Japanese notion called “wabi sabi,” meaning “simplicity and beauty in natural states,” was put to use during the design process: dark and woody furnishings, unrefined finishes, bamboo columns, and overhead pillow-like paper lanterns that evoke plucked urchin shells.

French fare and brighter tones rule at Twist, French chef Pierre Gagnaire’s first USA venue, which makes its home at Mandarin Oriental Las Vegas (3752 Las Vegas Blvd. South. Tel: 702-590-8888. www.mandarinoriental.com/las-vegas/the-strip/luxuryhotel). Refreshingly free of a casino, adult yet unstuffy in aesthetics, the LEED-certified property was the work of several architecture and design firms, and its 23rd-floor dining and drinking venues, Twist and Mandarin Bar, are unbeatable for their floor-to-ceiling windows with views of the Strip.

4D doesn’t begin to describe the imaginative, overwhelming sensory experiences that Cirque du Soleil (www.cirquedusoleil.com/las-vegas) offers in Las Vegas. The Québec-based outfit pushes the envelope with elaborate choreography, stunts and technology at most of its Las Vegas productions (there are seven, if counting Criss Angel’s Mindfreak). Michael Jackson comes back to life via life-sized hologram during “Man in the Mirror” at Mandalay Bay’s Michael Jackson ONE. The Beatles appear via projections at The Mirage’s The Beatles LOVE; and warriors of ambiguous gender/sexuality do gravity-defying battle on a revolving stage with touchscreen technology for precise, interactive projection effects in MGM Grand’s KA (which cost about $165 million to mount).

Each production represents an amalgamated marvel of design in multiple disciplines: costumes, music, choreography, sets (which are extensive custom builds), and even the seating. One unique example entails how, during several productions, music emanates from the seats to help point audience members’ attention to the direction of action they might miss, including performers that suddenly drop down from the ceiling via flying rigs. 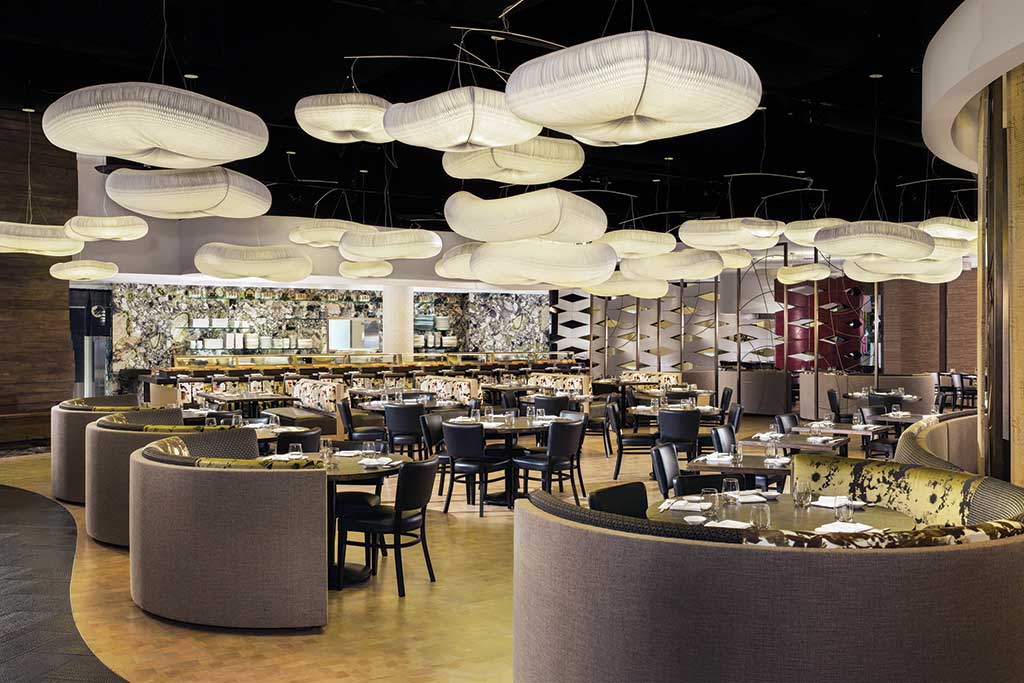 “It’s part of our DNA that we want everything to be four dimensional and break the wall,” says Calum Pearson, Cirque’s senior director for technical show support. “We want to create multiple entry points, so you never know where the action will come from next and the challenge is to direct your focus to where it is.”

“We really let the respective teams go off and create,” he elaborates. “It all becomes complementary. The set design, light  and projection guys will all engage. LOVE changed just recently. The original intent was a tribute to the legacy of The Beatles, and we brought them back via projections to embrace the vitality of the music. So we changed the stage to become a projection surface, and once you have that fourth dimension you can have the artist interact with them. We don’t want to create museum pieces, we want to create living art.”

The Las Vegas skyline is certainly alive, with a host of new architecture and design projects. To begin, Las Vegas Convention Center District Project, is a massive expansion and renovation of the center that includes a new exhibit hall and outdoor spaces.

Macau is considered the Las Vegas of the East, and Resorts World is building a massive, 3,000-room Chinese-themed project on the site where the iconic, old -school Stardust used to exist. Slotted to open in 2020, it will reportedly boast authentic Asian cuisine, a 100,000-square-foot casino, and ultra-chic tech-forward design on a level with what’s seen in today’s Shanghai.

Meanwhile, MGM Resorts International is spending around $450 million to completely reinvent the Monte Carlo as two distinct hotels: the luxurious 2,700-room Park MGM, which is home to the new 5,200 Park Theater and the Southwest’s first Eataly, and the 292-room The NoMad Las Vegas, a sibling to NYC’s buzzy NoMad. Opening date and many design specifics are TBA, but, like these others, we’re sure it’ll prove a jackpot for design lovers. 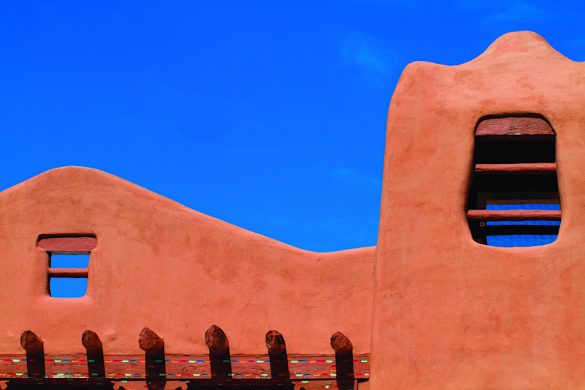 The Art and Allure of Santa Fe, New Mexico 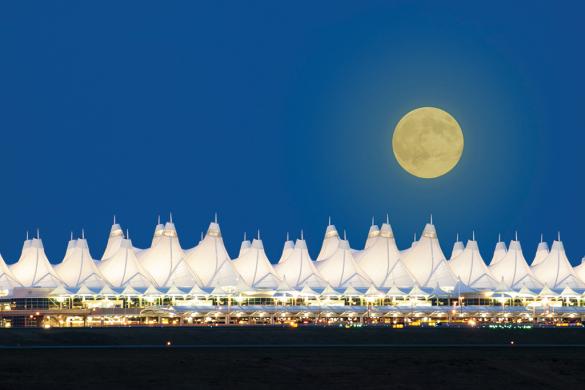 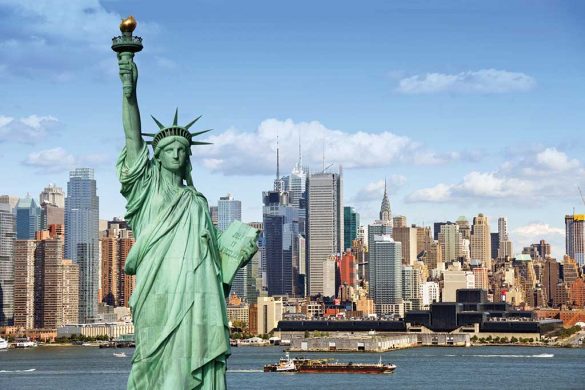 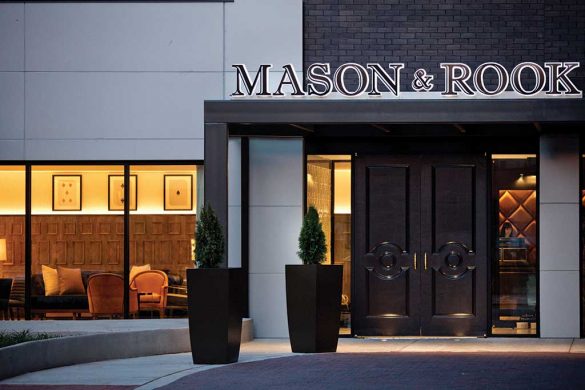