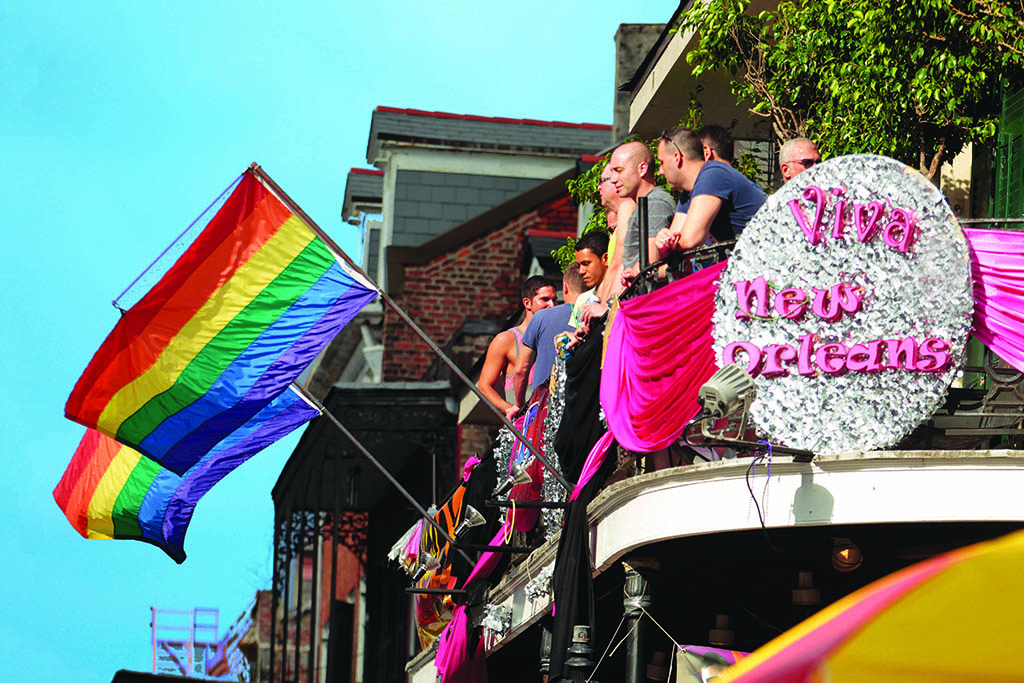 The historic Pontchartrain Hotel (2031 St. Charles Ave., Tel: 504-524-0581. www.thepontchartrainhotel.com. Rooms from $179), which has housed famous visitors like playwright Tennessee Williams and Truman Capote since 1927, is reopening this June in the lovely Garden District. After a year of renovations, the highbrow property will feature 106 rooms and suites, honoring the rich history through architecture, design, and service. It will be home to New Orleans’ first-ever rooftop bar, and local chef-hero John Besh is taking over the culinary outlets including the famed Caribbean Room.

Reflecting New Orleans’ new contemporary flair is Ace Hotel (600 Carondelet St., Tel: 504-930-3059. www.acehotel.com. Rooms from $179), which opened this past March. Ace, known to pander to jet-setting hipsters and modern families, is a far cry from the typical bed and breakfasts, guest-houses, and storied hotels in New Orleans. The $80 million, 234-room hotel is housed in a historic art deco building, featuring everything you would expect from an Ace: killer views, high-tech, modern design, trendy boutique, and exciting F&B outlets, including a restaurant run by two James Beard finalists.

Known for shrimp po’ boys, jambalaya, French-Creole, and fried chicken at institutions like Brennan’s (a highbrow Creole restaurant since 1946), New Orleans’ dining scene is also experiencing a revival in modern comfort foods. A number of excellent, contemporary restaurants have stolen the spotlight, and this trend is forecasted to last with recently opened spots destined to become established fixtures.

Speaking of Magazine Street, this six-mile-long road is chockfull of boutiques, restaurants, outdoor cafés, and galleries, and it’s now become the go-to street for all things fashion and lifestyle. Independent designers like Warby Parker, Kit + Ace and Kendra Scott all opened in the past year alone, sharing the same sidewalk with big chains like American Apparel, West Elm, and Jamba Juice, all of which debuted in the past five years. 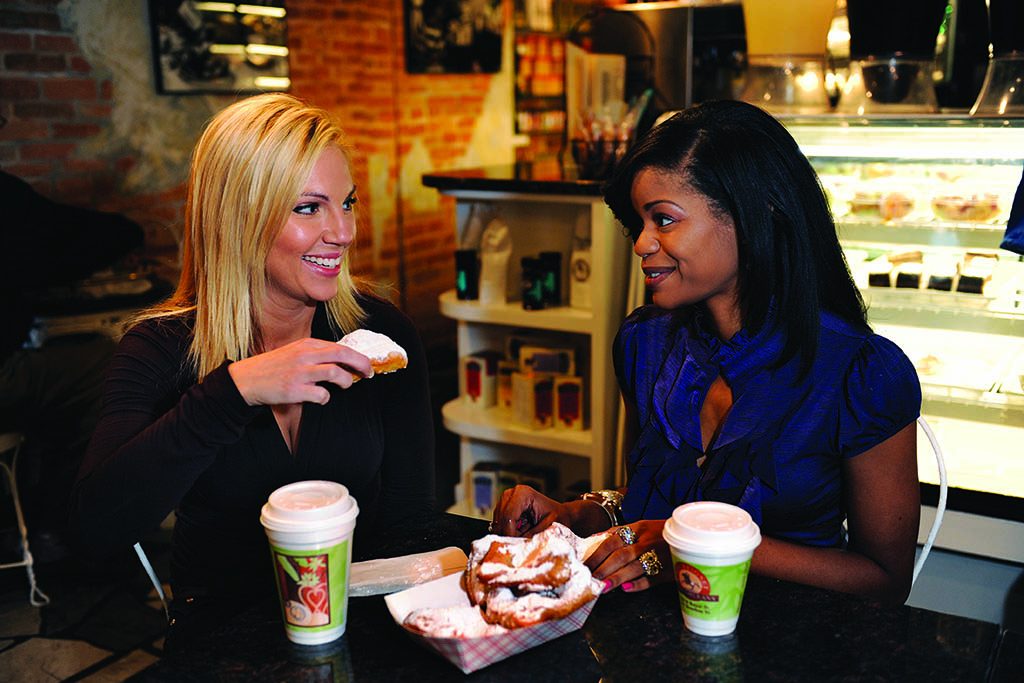 In the emerging Warehouse District (which is undergoing a $450 million South Market District development), Top Chef Nina Compton’s Compere Lapin (535 Tchoupitoulas St., Tel: 504-599-2119. www.comperelapin.com) has been dazzling gourmands since opening last year. The restaurant, with a distinct, modern-industrial setting, is dark and sexy, and the menu combines indigenous ingredients and rich heritage of New Orleans and the Caribbean. The curried goat, her claim to fame, is hearty and soulful, and plates like roasted beet salad with kale pesto and pistachios, and Brussels sprouts with butter- milk and crispy chicken skin are excellent for sharing.

Opened last fall, The Salon (622 Conti St., Tel: 504-267-7098. www.restaurantsalon.com) in the French Quarter seems to be made exclusively for the romantic gay couple. On the second level they feature a modern take on traditional afternoon tea, and award-winning Executive Chef Tariq Hanna is expert. A veteran in all things cute, sweet, and savory, Tariq (who’s graced top culinary programs on the Food Network and and TLC) offers light and airy snacks (from egg- salad sandwiches to ham and djion) and tantalizing baked goods like currant scones and pain au chocolat. There’s even elegant spins on NOLA classics like fried chicken sliders. While casual, The Salon is a terrific place for a romantic afternoon (with exotic teas or fine wines) and the elegant décor is fit for royalty.

Meauxbar (942 North Rampart St., Tel: 504-569-9979. www.meauxbar.com) has been a preferred neighborhood joint for years, and its new location on the rim of the French Quarter is almost completely gay staffed. While it makes the prefect, laid- back watering hole thanks to inventive cocktails, the modern French bistro comfort food gives you every reason to make an entire night of it. Try innovative plates like foie gras torchon (with blueberry jam, brioche, and walnuts), and go nuts over the French onion grilled cheese with braised beef. You deserve it.

For those who prefer to drink more and eat less, New Orleans has been celebrating all things boozy since the 1800s. While cocktail lounges are abundant, New Orleans gay nightlife is underrated, though it’s been experiencing a revival that’s moving in an exciting direction.

“The shift started happening around 2010,” says Brett LaBauve (Bouffant Bouffant), a local DJ and promoter in New Orleans gay nightlife who’s responsible for spear- heading the new dynamic gay scene with a few other local promoters. “I started throwing parties called Gimme A Reason and later would collaborate with newly relocated Mark Louque to produce some really giant warehouse parties with major, alternative gay DJs from all over the country. New Orleans has always been known as a party city, but I think it’s starting to get noticed for more than beads, trumpets, or cheesy French Quarter gay bars (not that there is anything wrong with those things!).”

Brett regularly DJs and hosts at some of New Orleans’ coolest LGBT spots, helping pioneer the new gay scene. But even while gay nightlife is finally going contemporary, some institutions are still rooted in place, proving tradition is long lasting. The Golden Lantern (1239 Royal St., Tel: 504-529-2860.) is one of the longest running gay bars in New Orleans (since 1966), where you can find the mother lode of French Quarter local celebrities, young and old alike. For a more adventurous night out, head over to Café Lafitte in Exile (901 Bourbon St., Tel: 504-522-8397. www.lafittes.com) in the heart of the French Quarter. It’s the oldest continuously running gay bar in America (since 1933), where guests can experience wild nights with karaoke, disco, and its legendary Napkin Toss.

Day or night, New Orleans is enchanting. It’s a place where you can eat well, sleep well, and party all night. Iconic attractions, year-round events and festivals, a dynamic culinary scene and growing gay community are a testament to its world-class allure, and nobody goes home without stories to share. While traditions and culture have made New Orleans one of the most intriguing cities in America, the swell of new hotels, a new airport, contemporary restaurants, nightlife, and buzzing neighborhoods outside the French Quarter proves New Orleans is just now getting started.