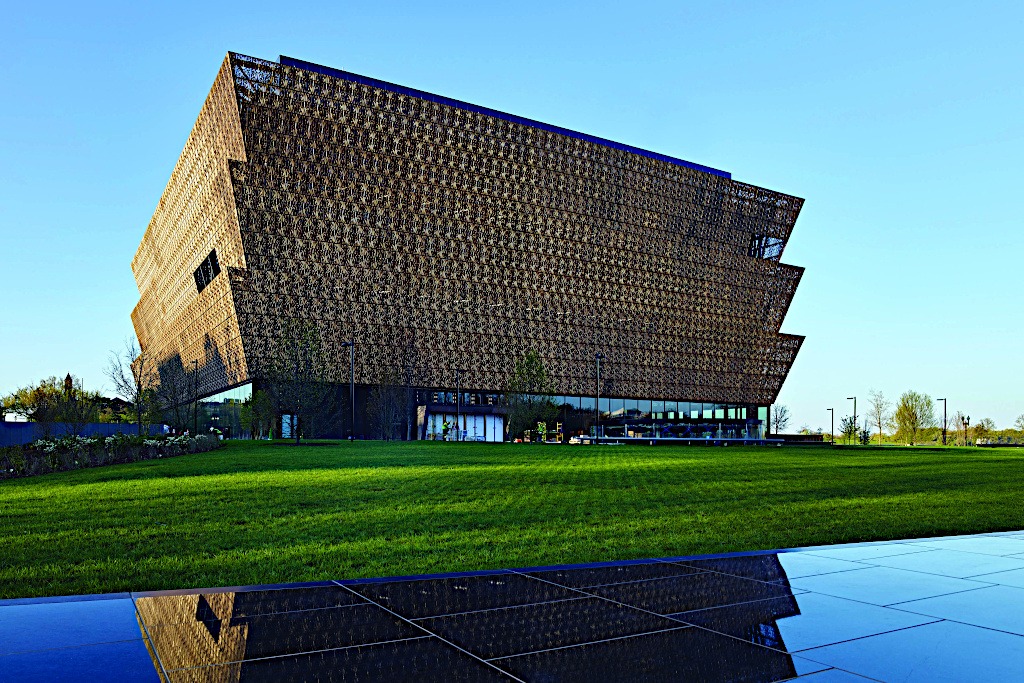 One of the biggest new developments in D.C. itself, however, is The Wharf. Just ten minutes by foot from the Tidal Basin’s prime Cherry Blossoms trail, and a few minutes more to the Holocaust Museum.

Washington D.C.’s hottest ticket is free. Opened in September 2016, during the final months of President Obama’s presidency, the Smithsonian’s National Museum of African American History & Culture (1400 Constitution Ave. Tel: 202-633-1000. www.nmaahc.si.edu) requires a date and time-specific ticket for entry, which can be snapped up three months in advance during peak tourism season (March-August). If you don’t plan ahead during this time, you may find yourself merely admiring its exterior.

So when a D.C. friend and I found ourselves with a free afternoon on Halloween, with a few hours to spare between early dinner and watching Dupont Circle’s way-gay, ridiculously fun (unless you twist an ankle) High Heel Race (www.facebook.com/17thtreethighheelrace), which literally runs down 17th Street, she suggested we roll the dice and see if they had any walk-up tickets left at the door, which is possible during off-peak months. “Maybe fate will be on our side,” she mused. Sure enough, staff members out front held a few unused tickets in hand, and in we went.

It was a spectacular, profound experience, functioning as a narrative that begins underground and works up towards the light. After taking an elevator beneath David Adjaye and Philip Freelon’s strikingly designed building, the journey starts with the arrival of Africans to the USA via slave ships, to their struggles, and figureheads, and triumphs, during decades of bigotry, segregation (there’s a full-sized train car with despicable “whites only” and “colored only” sections you can walk through), and violence.

There were sniffles, and sobs (my own, frankly), upon visiting the Emmett Till memorial section that contains the lynched 14-year-old boy’s glass-topped casket. Strides and triumphs made by African Americans in more recent times emerge as one moves upward, including displays dedicated to Oprah Winfrey and President Barack Obama. The building’s upper floors celebrate African American accomplishments, and one of my favorite sections is  dedicated to TV/film/music, chock full of iconic props, costumes, and multimedia, which includes Emmy-winning, trailblazing black gay filmmaker/writer/activist Marlon Riggs (Tongues Untied).

Commemorating Stonewall’s 50th anniversary, “Rise Up: Stonewall and the LGBTQ Movement,” runs from now until December 31, 2019. The exhibition boasts artifacts, images, publications, and coverage related to key moments (and some under the radar) in gay rights, including the fused wedding rings of Jim Obergefell and his late husband, John Arthur (the 2015 SCOTUS ruling on Obergefell’s case resulted in national marriage equality). Newseum is one of the few major D.C. cultural attractions separate from the Smithsonian (yes, there’s an admission, but well worth it), and traces the past and future of news reporting and the free press, with artifacts including a section of the Berlin Wall.

Spring 2019 saw the grand opening of a brand-new, permanent 140,000 square foot Spy Museum (700 L’Enfant Plaza. Tel: 202-393-7798. www.spymuseum.org), which had previously been housed on F Street. In May, after being closed to the public for 8 years due to damage incurred by a 5.8 earthquake, the mall’s 555-foot tall, iconic Washington Monument (www.nps.gov/wamo/index.htm) reopened to the public, with a new elevator and security system.

One of the most exciting 2019 debuts, especially for arts lovers, will be The REACH (www.reach.kennedy-center.org), Kennedy Center’s first-ever expansion. Described as “a living theater where diverse art forms collide,” and scheduled for an opening celebration in September, it will encompass three pavilions, outdoor spaces, a pedestrian bridge to the waterfront, and will be host to arts education, incubation, performances, film, festivals, and even picnicking. Plus, it will be accessibility-friendly, and so expansive that one can spot it from an airplane. 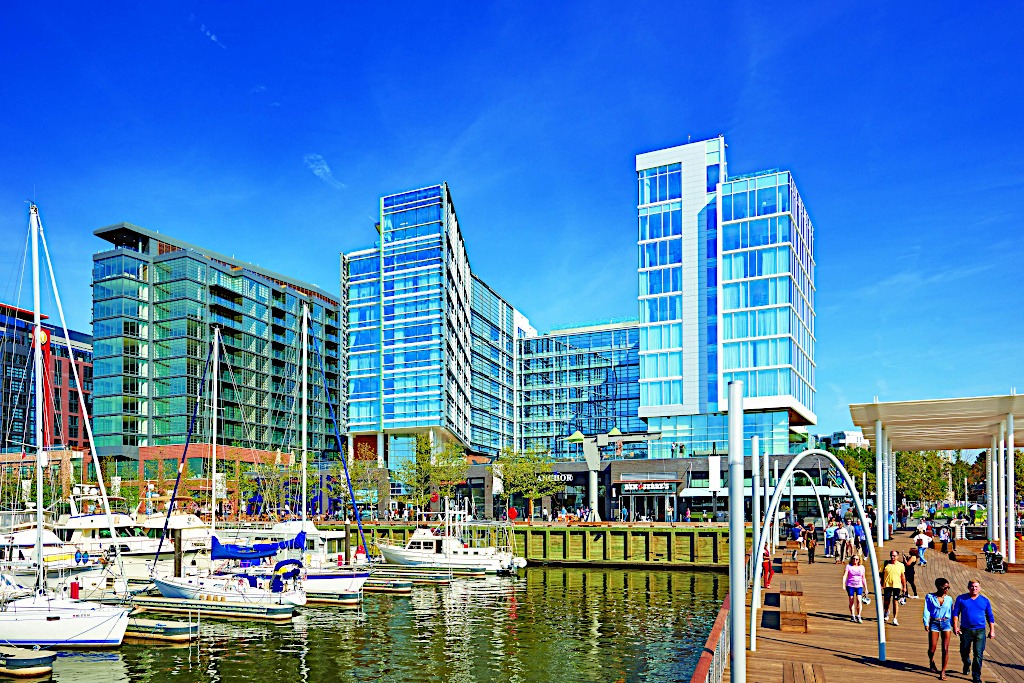 The Wharf from Recreation Pier

One of the biggest new developments in D.C. itself, however, is The Wharf (www.wharfdc.com). Just ten minutes by foot from the Tidal Basin’s prime Cherry Blossoms trail, and a few minutes more to the Holocaust Museum, this once grubby, mile-long waterfront strip along the Potomac River has been transformed into a $2.5 billion, sleek leisure and office district and boardwalk featuring hotels, restaurants, bars, and shops.

Lesbian Chef Jamie Leeds’ beloved Hank’s Oyster Bar (701 Wharf St. Tel: 202-817-3055. hanksoysterbar.com/thewharf) boasts a location smack dab on the boardwalk, so you can scarf down lobster rolls, crab cakes, and oysters with a side order of views and prime people watching. The Wharf is peppered with a mix of deeply local and prestige national storefronts, including Blue Bottle Coffee, Shake Shack, Milk Bar, and multi-story tiki bar and distillery, Potomac Distilling Company (1130 Main Ave. NW. Tel: 202-900-4786. www.tikitnt.com), from local rum distiller, Thrasher’s. During warmer months, concerts are held on floating stages and piers, and we’d be remiss not to mention The Wharf arrival of America’s oldest, still running open-air seafood market, Maine Avenue Fish Market (it dates back to the 1800s).

Conveniently, Hank’s is located just underneath one of The Wharf’s sleek, fresh hotels, the 175-room Canopy by Hilton Washington D.C. The Wharf (975 7th St. SW. Tel: 202-488-2500. www.canopy3.hilton.com), which opened in early 2018. Functional, modern, and comfy, the boutique styled brand is Canopy’s first USA property and it embraces local-centric twists including art, food, and the artisanal products stocked in its minibars and
lobby shop. Rooms with Potomac views are particularly bright and crisp, and guest perks include free bicycles (another Canopy opened in 2018 in North Bethesda’s equally buzzy Pike & Rose neighborhood).

The Wharf is also home to a 278-room InterContinental (801 Wharf St. Tel: 202-800-0844. www.wharfintercontinentaldc.com) that opened in late 2017. Its historic grande dame sister property, located
just a block or so from the White House, Willard InterContinental Hotel (1401 Pennsylvania Ave. NW. Tel: 202-628-9100. washington.intercontinental.com), unveiled an $18 million renovation in June 2018 to commemorate
its 200th birthday. Many of the 335-room hotel’s iconic guests and moments, including Martin Luther King, Jr.,
who reportedly worked on his “I Have A Dream” speech here, are chronicled in a small museum.

Another quintessentially D.C. property, The Watergate Hotel (2650 Virginia Ave. Tel: 855-256-3966. www.thewatergatehotel.com), debuted a major, clubby-chic facelift and rebirth in 2016, with cheeky and by no means coy reverence paid to its infamous place in history and politics. Although there are 348 rooms, they purposely try to leave the “Scandal Room”—used during the 1972 Watergate break-in— unoccupied and viewable to the public, since it’s decked out with memorabilia and retro items. It’s well worth a stop, as is the delicious, spacious, and slickly appointed Kingbird restaurant.

For LGBTQ visitors who plan to spend time around Dupont Circle, chic and contemporary St. Gregory Hotel (2033 M St. NW. Tel: 202-530-3600. www.stgregoryhotelwdc.com) renovated its 156 rooms in 2018, and the ones with fireplaces and patios are utterly divine. Meanwhile, a historic Adams Morgan church was transformed into the Line (1770 Euclid St. Tel: 202-588-0525. www.thelinehotel.com), which opened in December 2017. 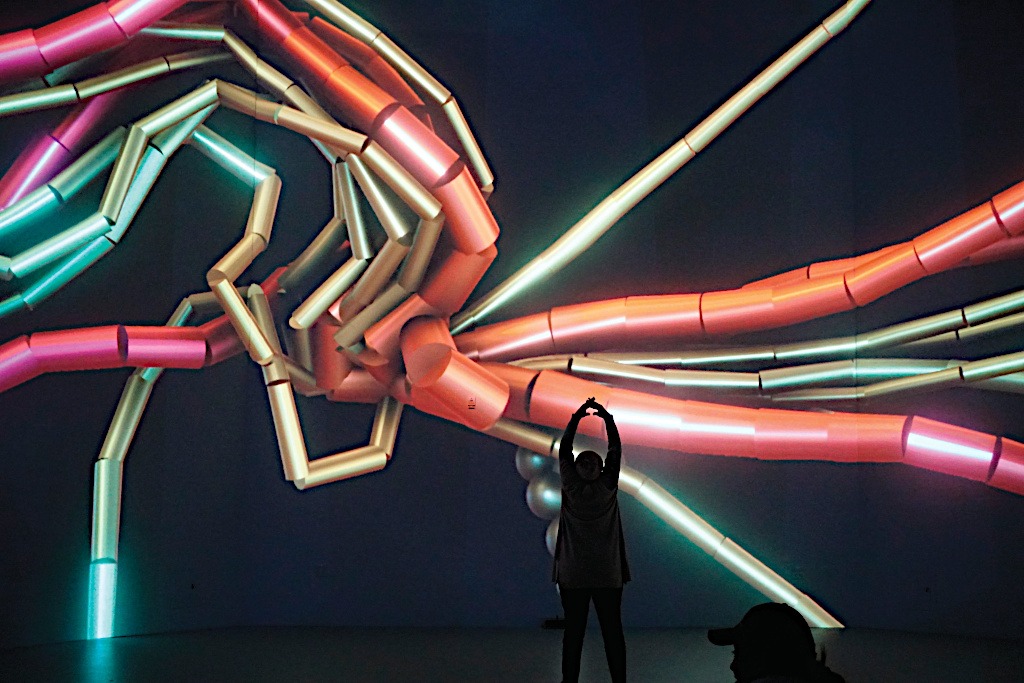 The Adams Morgan district saw the opening of a 10,000-square-foot LGBTQ sports bar Pitchers (2317 18th St. Tel:
202-733-2568. www.pitchersbardc.com) in mid-2018. It features five different areas and includes flat-screens galore, a dedicated lesbian space called A League of Her Own, and plenty of events (including speed dating and bingo!).

Barracks Row received a jolt of upscale 1920s-inspired glamor in its new LGBTQ bar and lounge, Orchid (520 8th St. SE. Tel: 202-544-1168. www.orchidonthehill.com), which opened in May 2018. Here you’ll find a 40-foot-long white and grey-veined marble bar that stands out among the retro wood décor . There’s also a food menu as well as proper cocktails and dancing.

If you can’t manage to snag a reservation at chef Nick Stefanelli’s prix fixe Italian restaurant Masseria (1340 4th St. NE. Tel: 202-608-1330. www.masseria-dc.com), do sidle up to their bar for equally tasty libations and an a la carte bar menu. Close by is Japanese restaurant O-Ku (1274 5th Street NE. Tel: www.o-kusushidc.com), which has a fun, urban-industrial look and serves up mighty tasty sushi, sashimi, and izakaya delights.

Also unique to the district is Starbuck’s “Signing Store” (625 H Street NE. Tel: 202-807-8439. www.starbucks.com). With a staff fluent in American Sign Language, it’s the country’s first Starbucks of
its kind, and you’ll spot plenty of students from nearby Gallaudet University, a trailblazing college for the deaf and hearing impaired. Customers who can’t sign may communicate with the baristas via digital pads, while completed orders are announced via a TV screen (they even have an exclusive mug, designed by deaf artist Jena Floyd, but luck will need to be on your side since they sell out almost as fast as new stock arrives).

Craft coffee and design lovers should be sure to visit Smithsonian’s Hirshhorn Museum & Sculpture Garden (Independence Ave. and 7th St. hirshhorn.si.edu). Opened in 2018, its café was designed by Japanese artist Hiroshi Sugimoto, with tables fashioned from Japanese nutmeg tree roots, and serves superb java and seasonal gelatos from the Georgetown-born Dolcezza (www.dolcezzagelato.com).

Cocktails get an interactive “augmented reality” treatment via iPad and iPhones at independent art gallery ARTECHOUSE (1238 Maryland Ave. SW. www.dc.artechouse.com), which opened during summer 2017. Specializing in edgy new media installations, including a sort of interactive “aquarium” containing evolving digital
creatures that respond to one’s touch and hand motions. If you’re big on social media posts, this attraction is like chum in the water!

As far as LGBTQ events to keep in mind when timing a visit, 2019’s edition of Capital Pride (www.capitalpride.org)
will take place May 31-June 9; Capital Trans Pride (www.capitalpride.org/events/trans-pride-2019) from May
17-19; DC Black Pride (www.dcblackpride.org) over Memorial Day weekend; and the 26th edition of LGBTQ film festival Reel Affirmations (www.facebook.com/reelaffirmation) will take place in the Fall, specific dates TBC. For even more up-to-the-minute D.C. updates, be sure to check Destination D.C. (www.washington.org).