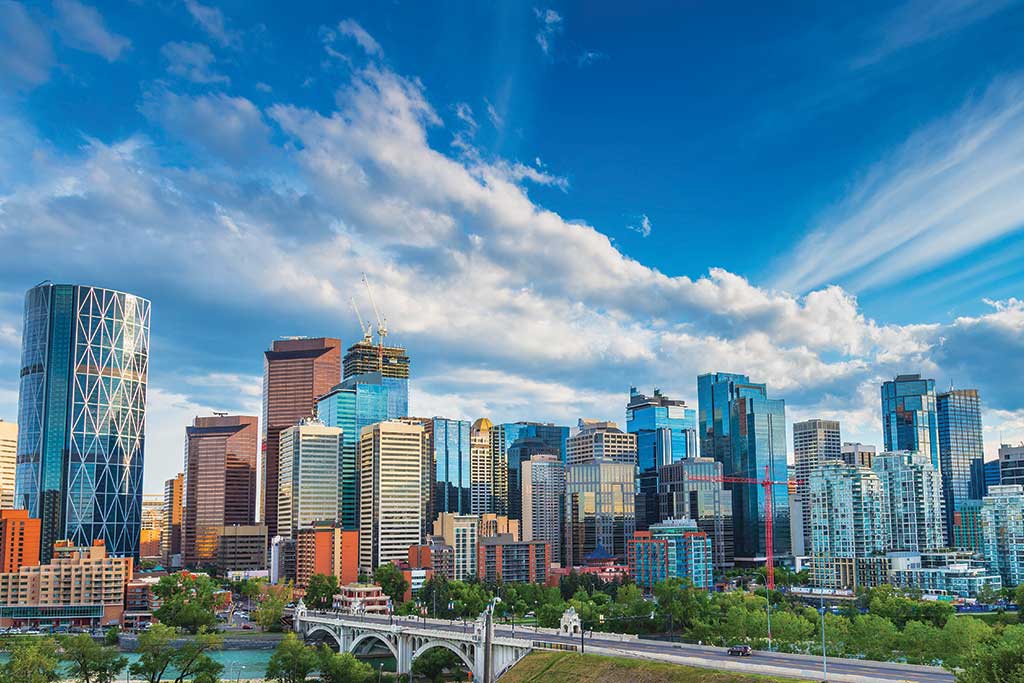 Until last year, North America had no major music museum with a building befitting its subject. Then came the opening of the spectacular and stirring Studio Bell

Another common factor: unlike paintings and literature, which are largely passive, requiring us to approach their frames, to open their covers, music and architecture reach out in our direction, playing inevitable parts in our daily lives.

Until last year, North America had no major music museum with a building befitting its subject. Then came the opening of the spectacular and stirring Studio Bell, home of Canada’s National Music Centre in Calgary, Alberta (850 4th St. SE. Tel: 403-543-5115. www.studiobell.ca). It’s a deeply satisfying building to explore, seeming to unfold around you as you move through it. Like the best symphonies, it is at once majestically scaled and compellingly intimate.

What did we have before this? Cleveland’s Rock and Roll Hall of Fame is, to me, Pei’s knock-off of his own Louvre Pyramid; it looks like an award-ceremony trophy, with none of music’s emotional resonance.

And while it might be argued that the Seattle edifice originally built as the Experience Music Project, Frank Gehry’s most garish major building, resembles a frozen chunk of 1970’s Moog synthesizer sounds, the design is untethered to any coherent vision. With no essential change to its appearance, the building was rechristened last year as the Museum of Pop Culture (aka MoPOP) and now houses a hodgepodge collection “spanning science fiction, fantasy, horror, fashion, sports, and video games.” Studio Bell is on another plane altogether. 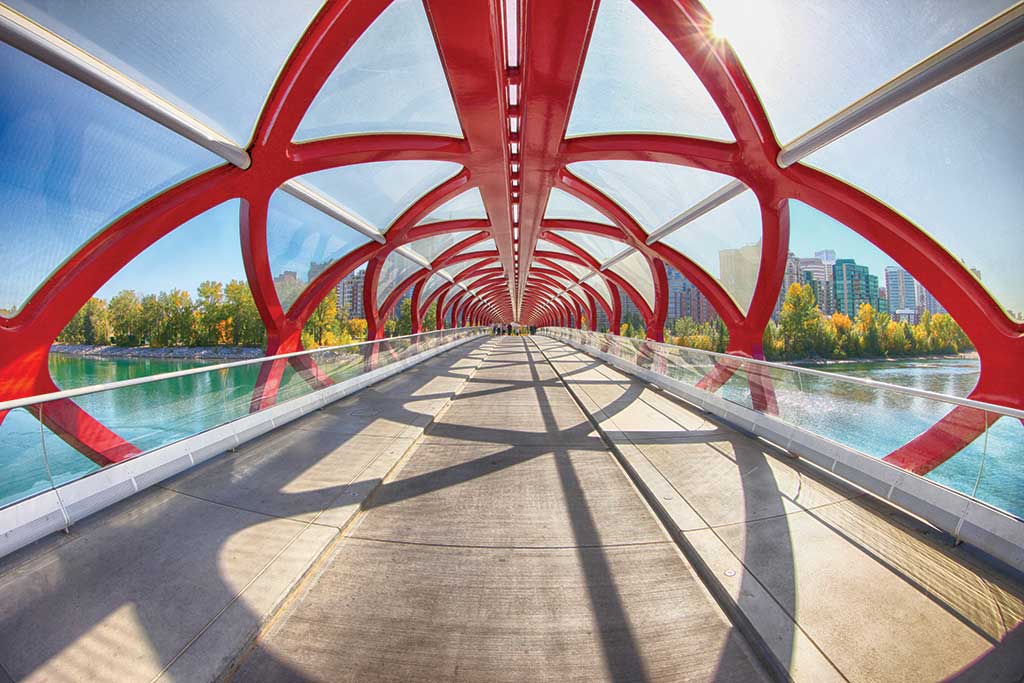 Designed by Allied Works Architecture, a firm based in Portland, Oregon and Manhattan and led by Brad Cloepfil, the complex’s interior, including extensive exhibition areas, several performance venues, and recording studios, is composed of nine interlocking Peace Bridge in Calgary
curvilinear towers clad in silver-gray terra cotta tiling. Their voluminous rounded forms were inspired by the shapes and function of musical instruments: elegantly structured hollows that vibrate with activity from within.

The museum’s exhibits encompass all genres of music, but go beyond the expected historical memorabilia. Science-rooted interactive galleries help visitors understand how music is processed by our minds and bodies and hands-on opportunities allow experimentation with instruments and recording equipment.

That said, there’s no shortage of pop nostalgia on offer, including the Rolling Stones’ mobile studio and a collection of performance costumes. There’s a special focus on Canadian artists, from Neil Young to K.D. Lang to Justin Bieber.

Studio Bell’s exterior, while simpler than its inner anatomy, nonetheless makes a bold statement. A four-story skybridge spans Calgary’s 4th Street, creating a gateway between Calgary’s historic city center and its rapidly gentrifying East Village. The western side of this shimmering arch literally fuses the new to the old, embracing the weathered shell of the formerly abandoned 112-year-old King Edward Hotel. Once a famed local blues venue, the “King Eddy” now hosts performances again as part of the National Music Centre.

The monumental stance of this destination museum also signifies a confident, selfassured Calgary, intent on asserting its identity as a major Canadian metropolis rather than being misperceived as a lobby to the Rockies or a dusty, dated cowtown.

In fact, Calgary is Canada’s third-largest city, after Toronto and Montréal, bigger than both the nation’s capital, Ottawa, and Vancouver. The oil boom of early 2000s infused the city with cash and with business people from around the world, bringing surprising diversity to this city on the plains. Mayor Naheed Nenshi, the son of Tanzanian immigrants, is the first Muslim mayor of a North American city; in 2013, he was elected to a second term with 74% of the vote. An urban development expert who studied public policy at Harvard F. Kennedy School, Nenshi has initiated programs to attract and retain young professionals and to combat urban sprawl.

With a diverse population, Calgary has a rich gay history and a worthy chronicler in boyish 47-year-old-native Kevin Allen. Allen recalls asking his parents what it was like for LGBT people in the city when they were young and being told, jokingly, “there were no gay people here before you were born.”

The result was his plunging into 25 (and counting) years of avid research, combing archives and interviewing queer elders to piece together a remarkably detailed picture of the city’s gay heritage. Currently working on a book on the subject, Allen’s website is a font of fascinating information and images, the sort of online historical resource that most cities’ LGBT communities sorely lack. Allen arranges queer history walking tours of the city through his non-profit Calgary Gay History Project (Tel: 403-890-7278. www.calgaryqueerhistory.ca). His lively, anecdotedriven tours include the sites of gay gathering spots dating back to 1939.

Each May, the city is home to the Fairy Tales Gay Film Festival (www.fairtytalesfilmfestival.com), ten days of events, including not just screenings but clever collaborations, like this past spring’s singalong presentation of Mamma Mia!, featuring the Calgary Gay Men’s Chorus.

Afficionadoes of Calgary’s Western heritage, and anyone interested in skilled specialty workmanship, will want to make a stop at the Alberta Boot Company (50 50th Ave. SE. Tel: 402-263-4263. www.albertaboot.com) for a casual tour of the entirely unautomated factory where some of North America’s highest quality leather footwear is made. The sole authorized boot source for the Royal Canadian Mounted Police, this handcrafting landmark feels like a time capsule of the early 20th century west.

For more contemporary couture, visit the atelier of internationally acclaimed gay designer and Calgary-native Paul Hardy (2501 Alyth Rd. SE. Tel: 403-242-4794. www.paulhardydesign.com), who has designed cutting-edge outfits and accessories for Bette Midler, U2‘s The Edge, and Sarah Mclachlan. A creator of interior design objects as well as fashion pieces, Hardy can frequently be found on-site, happy to chat with visitors and talk about his work. 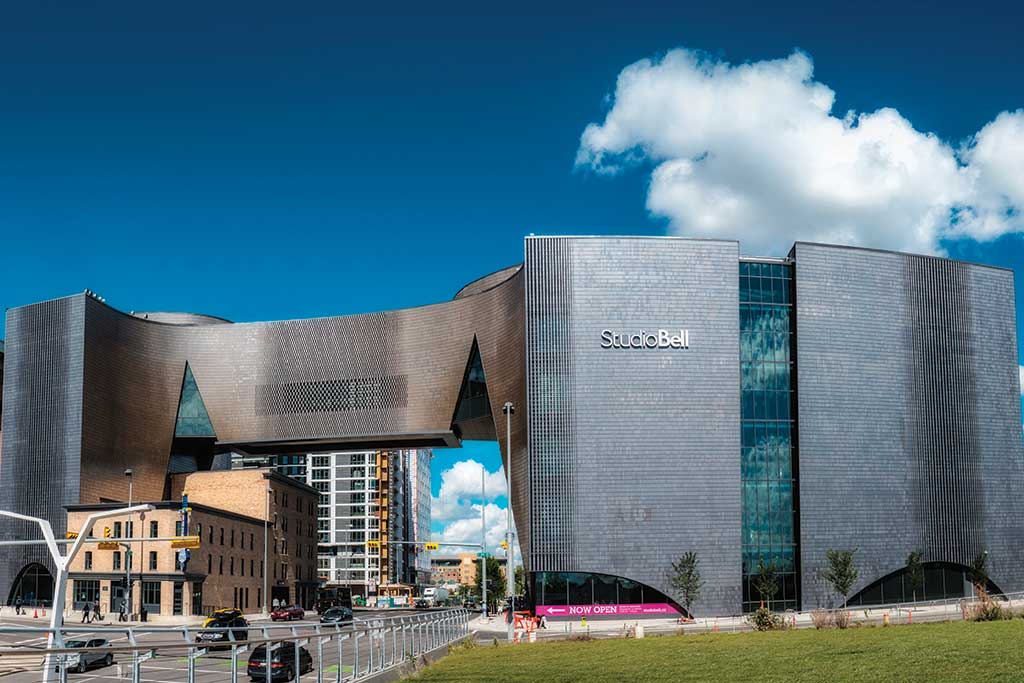 Discerning travelers will find no shortage of serious eating and drinking experiences in Calgary. Among the notable newer restaurants is Model Milk (308 17 Ave. SW. Tel: 403-265-7343), the imaginative reinvention of a one-time dairy bottling operation. With a whole animal butchery on-site and a refreshingly noncheffy philosophy: ”We start by asking ourselves: What do we want to eat today, rather than what do we want to cook today?” The brick-walled dining room serves up easy-tocomprehend deliciousness: local lamb with black garlic and dumplings, grass-fed beef over creamed kale with onion rings, halibut cooked with vermouth, tarragon, and leeks. No tweezer food here.

Want to learn where your meal came from? Calgary Food Tours (www.calgaryfoodtours.com) offers an excellent Sunday brunch visit to the major local farmers’ market, where guests meet ten local producers, including cheesemakers, bison, beef, and pork ranchers, produce farmers, and a local coffee roaster. If you’ve ever been disappointed by an overly-commercial food tour, fear not. The guides hired by owner Karen Anderson are all experienced food professionals with a depth of knowledge of the market and its characters. If you’re inclined you’ll have the chance to engage in substantive conversation about agriculture and small business with both your guide and the market vendors.

The past few years have seen a huge boom in Calgary’s craft brew culture, which easily rivals the Portland and Seattle brewing scenes in both quality and variety. On Calgary Brewery Tours’ (Tel: 866-279-1999. www.calgarybrewerytours.com) full-day (7 1/2 hour) Craft Beer Tour you’ll be escorted by van to five different breweries, sampling the wares at each, and you’ll only be scratching the surface of the subculture. If you’re a true lover of suds, there’s genuine incentive to check out Tool Shed Brewing’s canning line and meet the wax mustachioed partners at Dandy Brewing Company. Unfortunately, Canada’s byzantine alcohol regulations mean that small-batch beers, even canned or bottled, can only be sold in the province they’re brewed in, let alone exported stateside.

For lodging, one standout new option is the independent boutique Hotel Elan (1122 16 Ave. SW. Tel: 866-203-2212. www.hotelelan.com), an instant landmark thanks to the bright red detailing on its facade (a hint at the modern Italian design within). The Elan is located in the heart of the city’s strollable 17th Avenue shopping and entertainment district (www.17thave.ca), highlighted by a spectacularly of-the-moment fashion mecca.

From leading-edge fashion to contemporary cusine, from roughriding rodeo to a deep dive into gay history, Calgary should no longer be written off as a cowtown. It’s evolved into a notably open-minded city with minimal sprawl and several booming, walkable central neighborhoods.

And for gay travelers who want to stay ahead of the game in global culture, there’s no better reason to make a weekend trip to Calgary than Bell Studio, the museum world’s most spectacular new contribution to the canon of frozen music. With the National Music Centre’s stunning new headquarters, Canada has found its Bilbao.