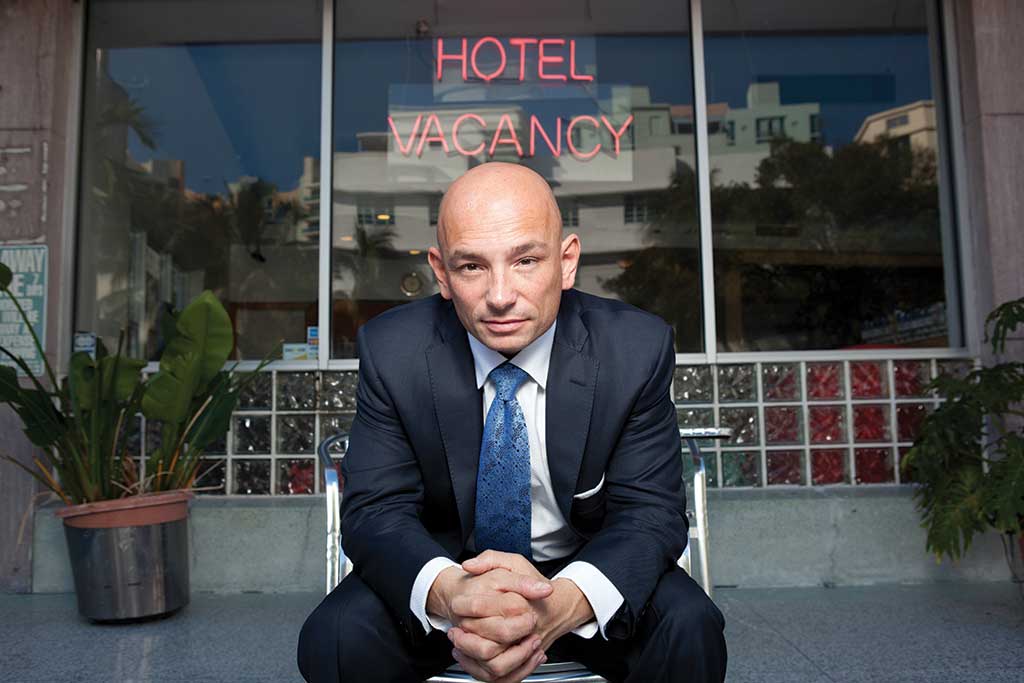 In his Italian designer suits, Melchiorri is the archetypal “fixer.” Like fellow Brooklynite Harvey Keitel’s character in Pulp Fiction (an expert in corpse disposal against the clock), he assesses the situation and gets straight to business with clinical, no-nonsense precision.

Hosting and co-producing his top-rated Hotel Impossible and its two spin-offs on the Travel Channel, Anthony Melchiorri is a man constantly on the go. With a fourth show in the works, details under wraps, his enterprise extends to his hotel management and consulting company Argeo Hospitality, regular speaking engagements, his line of hotel products, and a forthcoming book.

“I travel more and sleep less than most humans,” said the charismatic Brooklyn native by phone from Daytona Beach, Florida, where he is consulting on the relaunch of the 1940’s Streamline Hotel, birthplace of NASCAR and with past incarnations that included a gayfriendly bar and hotel. “But I love my job, which is helping hotel people be successful. I’m like the proverbial kid in the candy store.”

That’s a distant cry from his upbringing in Brooklyn’s Sheepshead Bay, his birthplace and home to this day. “When my father passed away, my mother struggled to pay the rent and feed us,” he said, remembering “hiding in the closet when bill collectors came around.” Amid the instability, 15-year-old Melchiorri found awakening at Manhattan’s fabled The Plaza Hotel.

“Walking around the Plaza with my girlfriend, things seemed better,” Melchiorri recalls. “Not better than my life, just better. It looked good, smelled good, and I said to myself, one day I am going to run this hotel.” In 1986, he joined the US Air Force, serving four years as a protocol officer in Missouri, plus six months in Honduras. Working fulltime, he earned his bachelor’s degree in business administration at night from Park University. “On weekends, I worked as a night auditor at the original Embassy Suites hotel, in Overland Park, Kansas,” said Melchiorri, calling these times “life-changing.”

Seemingly small accomplishments, such as praise from his commander for the superior way he folded his clothes, went far. “That made me realize that business is about making people feel good,” he said. Invaluable, too, was welcoming dignitaries and military personnel at the base’s VIP lounge. “That taught me that whether dealing with employees or guests, make them feel better, and everything else takes care of itself.”

These formative experiences produced career-defining mantras well known to his Travel Channel fans, including “no excuses,” “everything matters,” and “everyday excellence.”

After graduating in 1990, he spent ten months at the Embassy Suites in Times Square (now a Doubletree). Then, he realized his teenage dream by taking the night manager position at The Plaza. Rising to director of front office operations, the once anxious kid was now a man confidently in charge.

“I trusted myself with decisions and change,” said Melchiorri. “Like the time the 11year old Shirley Temple lookalike came through the revolving doors and said, ‘Hey Mister, where’s Eloise?’ So, a colleague and I created the VIP Eloise tour.” With that concept since extended to the hotel’s Betsey Johnson–designed, pink-splashed Eloise Suite and other Eloise-themed programs, Melchiorri made his name on further bold moves.

As general manager of Manhattan’s Lucerne Hotel, his mission-driven program of excellence earned top honors from the New York Times three years in a row for “service unrivalled.” Presaging his “hotel fixer” future, he resolved the property’s lack of food services by contracting deliveries from a nearby diner, holding it to the same exacting standards of excellence.

In his next general manager role, he masterfully repositioned the ailing Algonquin Hotel, Manhattan’s oldest continuously operating hotel and legendary 1920’s haunt of Dorothy Parker and the Round Table. Persuading the owners to close the 1902 landmark for 29 days in 2005, Melchiorri oversaw a sweeping $15 million renovation that returned the hotel to Michelin-rated prominence. To publicize the makeover, which included the John Barrymore–inspired 1933 Blue Bar, Melchiorri and his team created the “$10,000 Martini.” Garnished with a single diamond; three have been sold to date.

In 2010, following asset management roles with Tishman Hotels and other organizations, Melchiorri founded Argeo Hospitality, his consultancy specializing in areas such as revenue management, brand development, and sales and marketing for hotel owners, developers, and investors.

Two years later came another gemstone of an idea. “After 25 years in hotels, I wanted to go on television and share my knowledge with the world,” said Melchiorri. “This business is widely misunderstood by operators and consumers alike, and I saw a real opportunity to help and educate people. My wife’s reaction was, ‘Who the hell wants to see you on television?’ But with help from two partners, we pitched Hotel Impossible around, Atlas Media bought it, and Travel Channel picked it up.”

Eight seasons and 100-plus episodes later, people love watching Melchiorri travel around North America on critical, unscripted four-day missions to save struggling independent hotels from operational, financial, and other woes. In his Italian designer suits, Melchiorri is the archetypal “fixer.” Like fellow Brooklynite Harvey Keitel’s character in Pulp Fiction (an expert in corpse disposal against the clock), he assesses the situation and gets straight to business with clinical, no-nonsense precision.

“Come in my zone, like a boy trying to date one of my daughters, and I know the color of your socks,” he said. Nothing escapes his vigilant eye; red flags include unclean rooms, sloppily worn uniforms, staff who avoid eye contact or do not smile, and faulty construction, which he’ll tear down while confronting the owner. Gentler though than, say, Gordon Ramsey, he genuinely wants hoteliers to recover and prosper. More businessman than celebrity, more “good fellow” than enforcer, he is the industry’s Mr. Feel Good.

“Like Bill Kimpton’s philosophy of the hotel as a place of refuge for the weary traveler, I take safety, security, and comfort as seriously as a heart attack. Hotel owners in financial trouble make me a nervous wreck, like in my childhood—that brings my Type A personality right out.”

Whether developing or re-positioning a hotel, his keys to success include putting the right systems, protocols, and leadership in place.

“After the Algonquin, I served as Senior Vice President at the 800-room Nickelodeon Hotel and Resort in Orlando,” he related. “At the bar one night, I observed the restaurant cleaning crew on their cell phones for almost 30 minutes during non-break time. I woke up the director of housekeeping at home, and asked him to come right over and fix the problem. Why not me? Because it’s not my job. Creating the right system was his job. Organizational excellence starts at the top. If not, you won’t find it at the bottom.”

Crucial, too, are the right hires. “Eric Long, general manager at the Waldorf-Astoria, taught me that no matter how busy you are, you take time to interview people,” Melchiorri continued. “Then you know who you are getting. Smiling, for instance, is one of my service priorities. You cannot teach people to smile or be nice. In hospitality, those must come naturally—otherwise it doesn’t work.”

Even the savviest travelers can learn from him. Forgot your sex toys? Call the hotel and they will mail them to you. Check hard-toreach spots for dust—if housekeeping has not cleaned there, they’ve likely skipped easier places. Don’t ever yell at staff, and make sure the reception clerk points to, but does not announce, your room number.

On the positive side, his companion shows “Hotel Impossible: Five Star Secrets” and competition-style “Hotel Impossible: Showdown” focus on hotels that do it right. “It goes back to my discovering The Plaza,” said Melchiorri. “The best hotels make you feel good, feel better, and feel special in ways that may be beyond words, but are unmistakable. As I tell my team, if the guest is not wowed by the experience, we fail.”

Brand front-runners include Virgin Hotels. “Hiring great people and mastering unexpected details, Sir Richard Branson is going to make waves with these properties,” Melchiorri said. “Langham and One&Only also lead with their people and service from the heart.”

Referencing the successful gay-owned “second career” properties around the Northeast, including the Relais & Chateaux Glenmere Mansion in Chester, N.Y., Moose Meadow Lodge in Waterbury, V.T., and Ecce B&B and Roxbury Motel in the Catskills, I asked Melchiorri about the realities of getting into the lodging business.

“If you don’t want strangers in your house, cleaning up after them, and serving them breakfast, do something else,” he said. “On the other hand, if you are committed to service and giving your full heart, like my good friends Greg and Joe at the Roxbury, who came from theater and finance and created a sensational product and experience, then everything will make sense.”