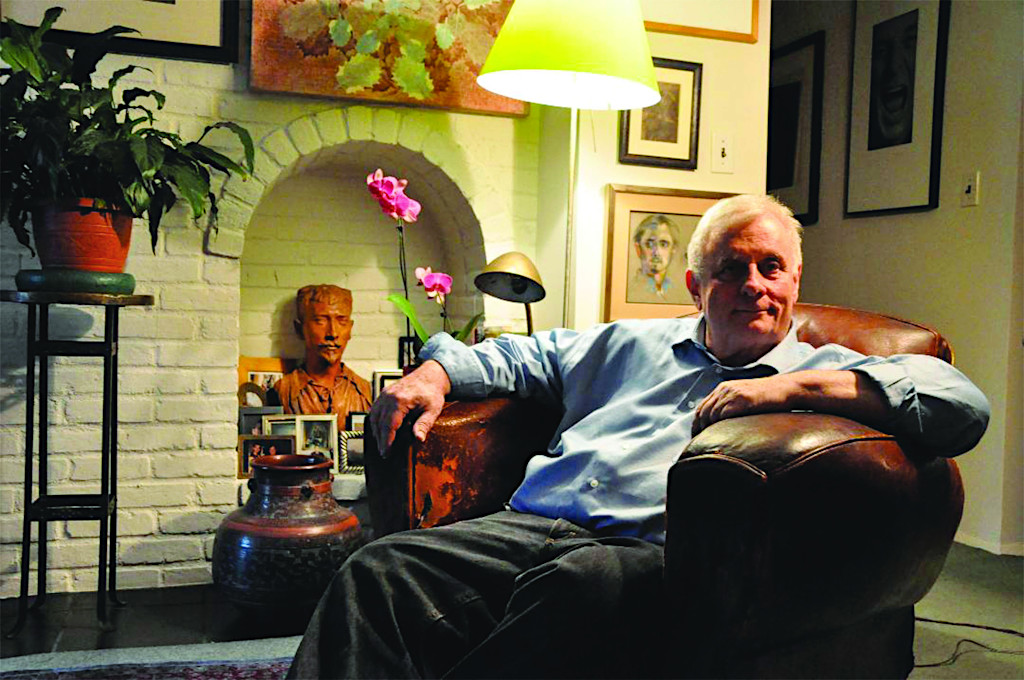 It is his memoir A Boy’s Own Story that splashed Mr. White onto the literary scene. Rounding out his trilogy of autobiographies he followed this up with The Beautiful Room Is Empty and The Farewell Symphony.

August 2020 saw the launch of A Saint From Texas, Edmund White’s 29th book. He’s famous for his self-deprecating sense of humor as well as his twinkling and often mischievous wit. White is the undisputed “silverdaddy” of gay literature. He unabashedly shares with his readers his deepest and often darkest thoughts about life and sex. He is also the co-author of The Joy Of Gay Sex.

His conversational and irreverent style of writing has garnered him many awards. White was made an officer in the French Ordre des Arts et des Lettres and won a literary prize from the Festival of Deauville. He was also named the 2018 winner of the PEN/Saul Bellow Award for Achievement in American Fiction.

It is his memoir A Boy’s Own Story that splashed Mr. White onto the literary scene. Rounding out his trilogy of autobiographies he followed this up with The Beautiful Room Is Empty and The Farewell Symphony. White is an essayist and he also worked as a correspondent at French Vogue for a decade. He still contributes to the New York Times Book Review.

In City Boy, White chronicles his life in New York City during the 60s and 70s. He moved to the City in July of ‘62 after majoring in Chinese at the University of Michigan and was accepted at Harvard to do his PhD but opted to move to Greenwich Village to live with his first boyfriend.

White wrote States of Desire: Travels in Gay America, a travelogue that explores gay culture in cities across the states in the late 70s. This was a gloriously free and adventuresome time just prior to the beginning of the AIDS epidemic. Along with Larry Kramer, White was one of the original 6 founders of the Gay Men’s Health Crisis (GMHC).

White shares with us his life in Paris from ’83 to ’90 in his memoir Inside A Pearl, and in ’93 he penned the critically acclaimed biography, Genet.

He often spent summers in Venice and it was on my second trip to the “Floating City” when author David G. Hallman suggested I read White’s 2009 memoir City Boy, in particular chapter 11. Wickedly funny as well as informative, I now recommend the same to all my friends journeying to Venice. Each visit, I happily make my obligatory visit to Peggy Guggenheim’s museum. In fact, during a recent trip during Carnival the apartment I rented overlooked her museum garden, in particular, her stone chair.

“…she (Peggy) had one obsession— arranging for her babies (Lhasa Apsos), and herself, to be buried in the garden of her palazzo. It was against commune rules to be buried anywhere but in a cemetery, but Peggy was willing to give her entire art collection and her palace to the city of Venice in exchange for having the rules bent in her favor. She eventually succeeded. In her garden she had a Byzantine stone chair, and now she and many of her dogs are buried in the ground that surrounds it.” – from Chapter 11, City Boy

I recently had the great pleasure to talk with Edmund White (www.edmundwhite.com), discussing a broad range of topics as well as the launch of his latest book, A Saint From Texas.

Edmund, Venice is my favorite city abroad and I can’t stop visiting her. Do you still travel there?
I would in a heartbeat go there but it’s a tough city for someone on a cane.

You’ve lived in Paris. You made a risky trip to Syria in the early 80s, traveled to Jordan and Crete. You’ve visited Zurich often and went to the Cannes and Berlin film festivals. But New York City has remained your home base. Is there a destination you’re still aching to explore?
My favorite city is Istanbul, but I doubt it’s the same. I’d love to go to Kyoto.

Why is Kyoto your must-see city?
I love classic Japanese literature: Genji, the Pillow Book. And I once thought of myself as a Buddhist.

You weren’t just living in New York City during Stonewall, you were there! The night of June 28, 1969 you were at the Stonewall Inn during the riots. What was that like? Did you have an immediate sense of what was happening and the importance of the event?
Yes, it felt historic, but we laughed a lot at the slogans, The Pink Panthers or Gay is Good in imitation of Black is Beautiful.

We must discuss your most recent book, A Saint From Texas, launching this August, 2020. First, the cover design is gorgeous. It is so reminiscent of the late and beautifully talented illustrator, Roger Duncan. Who created the cover?
I think it was a cover of Vogue in the 1950s.

I haven’t read the entire Edmund White library, but I’ve consumed my fair share. I must confess, A Saint From Texas is definitely my favorite book of yours to date.
“Yvette and Yvonne Crawford are twin sisters, born on a humble patch of East Texas prairie but bound for far grander fates. Just as an untold fortune of oil lies beneath their daddy’s land, both girls harbor their own secrets and dreams—ones that will carry them far from Texas and from each other. As the decades unfold, Yvonne will ascend the highest ranks of Parisian society as Yvette gives herself to a lifetime of worship and service in the streets of Jericó, Colombia. And yet, even as they remake themselves in their radically different lives, the twins find that the bonds of family and the past are unbreakable.” (from A Saint From Texas)

The story is intelligent, clever, and emotional, but then slaps you across the face being unapologetically acerbic, even gleefully shocking. The twins, Yvonne and Yvette are complimentary, identicals. A Saint From Texas is just itching to be adapted to screenplay. Would you consider a film adaptation or have you been offered one?
Consider? I’d beg for it!

And the ending is ripe for a sequel. Are you planning on continuing the story?
No. Now I’m writing a novel set in the future about polyamory.

In your memoirs I admire your ability to share the most intimate details of your life. Your body of work is the definition of an open book, no pun intended. Are there limits as to how much you will reveal about yourself, family, or friends and have you ever regretted scenarios you have shared?
I’m a literary exhibitionist, but when a dirty passage from Our Young Man was read out loud at my 80th birthday I cringed.

The flavor of A Saint From Texas tastes a bit like John Irving in all the best possible ways. Interestingly, the two of you are good friends. How did your relationship with John come about?
I could never have written the Saint without having read Irving—the scope, the braided narrative, the satire! I met him because he said nice things about me in a paper in Nashville. He’s a very warm, sincere man with strong opinions, though he can be self-deprecating. I was able to give him a Lammy as a friend of gays. (Lambda Literary Awards, also known as the Lammys, are awarded yearly by the U.S.-based Lambda Literary Foundation to published works which celebrate or explore LGBT themes.)

I know as an adult you’re a voracious reader. Were you also, as a child?
I remember, or think I do, when I learned how to read and I thought it would be my passport into other, better worlds. I didn’t like to read children’s books. When I was nine I wanted to read Anatole France’s Thaîs, which was under reserve as a dirty book. When I was unable to obtain it I took my protest all the way to the mayor’s office (no response). My favorite books in grade school were Pierre Loti’s Disenchanted about life in Turkey’s harems, War and Peace (though I disliked how the aristocrats’ dialogue was not translated from French), a novel about the Lost Dauphin, and Henry Green’s Nothing (still a favorite).

What is the most challenging aspect of the creative process for you?
The most rewarding aspect of writing a novel is how it ties your days together.

Any advice for wannabe writers?
If you’re a serious “literary” writer, don’t study the market but just write a book you yourself would like to read.

You’re a professor at Princeton and have taught creative writing classes. Do you ever offer master classes for plebeians like myself? I’d certainly be first to sign up.
I retired two years ago. I’d give a master class if offered. You’re hardly a plebeian!

When you’re in the throes of writing, what is your writing schedule like?
Totally chaotic, like my life. Only fear and guilt make me settle down to write.

Edmund, I have found you to be amazingly accessible and generous. In fact, you offered a blurb for the cover of my first novel 15 years ago. Thank you, again. And thanks in advance for the novels, memoirs, essays, and reviews you’ll be entertaining and enlightening us with in the near future.
My pleasure.

Gay Bookstores Around The World

Gay Bookstores Around the World