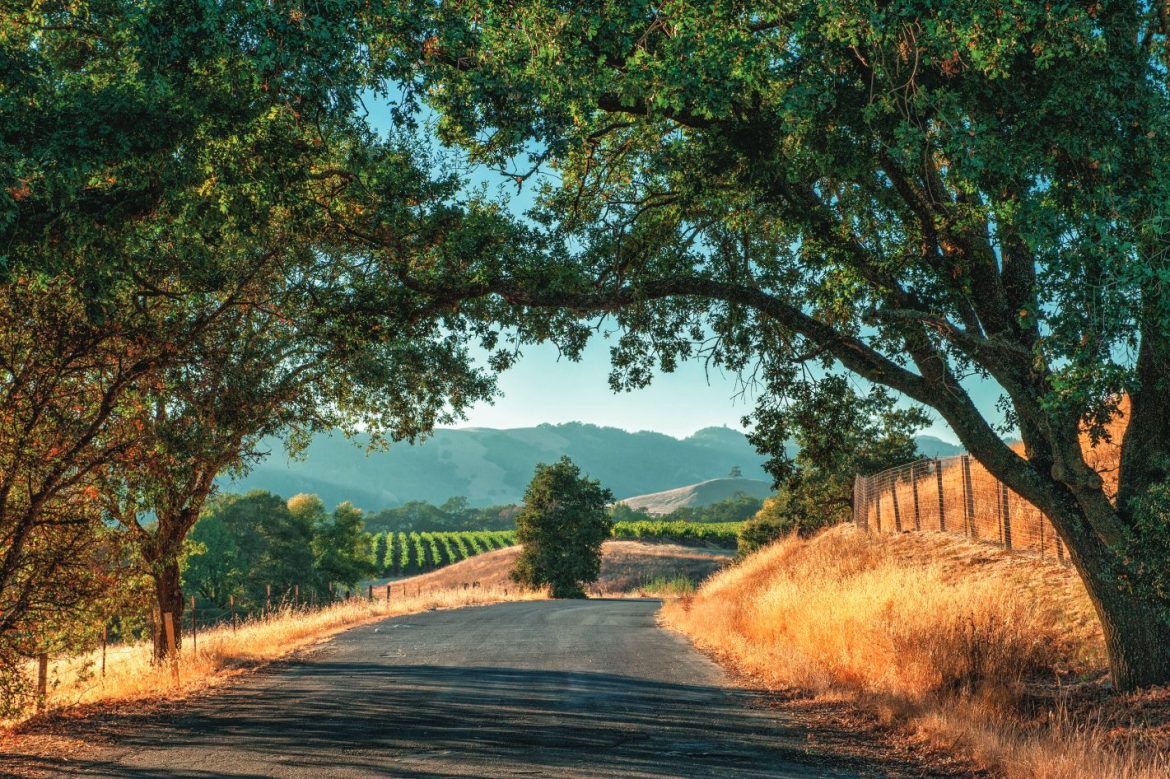 He said it was “quintessential wine country,” the kind of town you see in magazines when people write about Sonoma and Napa.

The following morning, we were up for another adventure. The cars had recharged on Autocamp’s on-site EV chargers overnight and were ready to go. We had the opportunity to choose our own journey and go where we wanted. Some wanted to revisit the coast, others wanted to stick closer to camp and check out Guerneville, and one guy brought up a town to the north called Healdsburg (www.healdsburg.com). He said it was “quintessential wine country,” the kind of town you see in magazines when people write about Sonoma and Napa. While yesterday’s drive was closer to the coast, this would be more inland. It would be less mountainous, more upscale, and more designed for tourism. 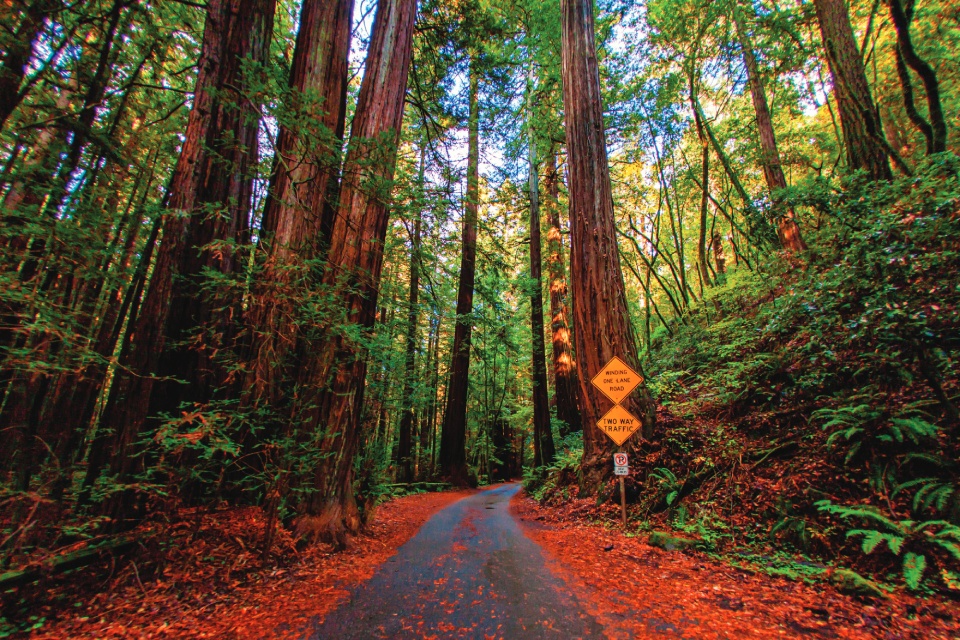 I quietly rolled my eyes at the idea. Here we were, in this beautiful setting that, surprisingly, wasn’t overrun with tourists at all. These small towns actually felt like small towns, the beach was practically empty, and even the town of Guerneville, which was the most “touristy” of them all, wasn’t even that crowded. Why would we leave all that for a tourist trap? On the other hand, I had spent the previous day driving around alone, so I figured it might be fun to spend some time as a group, even if it was in a town I didn’t want to be in.

I soon discovered, however, that the drive to Healdsburg was beautiful. Tree-lined roads had vineyards on both sides, with a bright sun and blue sky overhead, and soft rolling hills lining the horizon. I have to admit, a sense of “quintessential wine country” was certainly felt. When you think of Sonoma, this is the kind of vibe you imagine in your head. My song of choice for this drive was ‘Everyday is a Winding Road’ by Sheryl Crow. Thanks to the ID.4’s six-speaker surround sound, the music was crisp and vibrant, making the drive feel like a scene from a movie, complete with its own soundtrack.

After arriving, I quickly fell in love with Healdsburg and had to admit that it wasn’t what I had expected. It was filled with boutique hotels, quaint shops, cafes, and, of course, wine stores. Thankfully, it didn’t feel overcrowded or tacky. The visitors all seemed refined, casual, and friendly. The four of us made our way into an antique shop, Antique Harvest (www.theantiqueharvest.com). Its size alone was impressive, and the shop sold everything from old cameras to albums, antique sofas, and even retro comics (which are probably worth way

Afterward, we made our way towards the town square. Yes, Healdsburg is so quaint and pristine that it literally has a town square with a park at its center. Immediately, my horror senses began tingling once again. But this time, I was certain I knew where I was. “This is from Scream,” I said to the group out of nowhere. They all looked at me with bewilderment. “I swear I recognize this place,” I said. “This looks just like the town from Scream!”

As we continued walking, I noticed a tea shop. As an absolute tea fanatic, I couldn’t help but break away from the group to check it out. The Russian River Tea Co. (www.russianriverteaco.com) is a wonderful little store filled with loose leaf teas, chocolates, and teaware. They have classic teas like Darjeeling and Sencha, as well as house blends like the California Dreamin’ that combines black tea with orange peel, vanilla, and cinnamon. They also have a wide range of homemade chocolates, including their outstanding caramel-filled dark chocolate truffles, which I bought as a gift, but ate on the drive back to camp.

The shop’s owner greeted me and asked what brought me in. I told her I was a journalist writing a story about road-tripping through Sonoma and that it’s impossible for me to pass up an opportunity to check out a tea shop.

We got to talking and quickly hit it off. Before long, we were chatting like old friends. At one point, she filled up a cup with ice and poured some iced tea into it. “It’s mango ice tea,” she said. “It’s one of our best blends for serving cold.” And she was right, it was outstanding. On a hot Northern California afternoon, it was totally refreshing, and thanks to the mango, it perfectly blended sweet, earthy, and floral, all in one drink.

At one point in our conversation, she said, “You know, Scream was filmed here…” My eyes widened and, probably much too loud, I screamed, “I knew it!” I couldn’t believe that just hours ago I had scoffed at the idea of visiting Healdsburg, but now I was standing on the very street where Sidney Prescott, Gale Weathers, and Deputy Dewey had all stood. I had, without any intention of doing so, blindly made a pilgrim age to the filming location of my all-time favorite movie.

After chatting for a solid hour, it was time for me to say goodbye. By now my group was probably long gone, so I was once again free to explore on my own. I wandered into Levin & Co., (www.levinbooks.com) an indie bookstore that was also stocked with board games and even CDs. It’s been a long time since I’ve seen racks of CDs at a store! The staff was friendly, and the whole vibe of Levin and Co. harkened back to a simpler time and an easier life. Part of me started asking, should I live in Sonoma?

Before heading back to camp, I made one last stop at Outlander, (www.outlanderhealdsburg.com) a local men’s shop that’s decked out with a wide selection of menswear from around the world. They have everything from classic and casual flannel shirts to fashion-forward jackets. The store is an absolute treasure trove and has a huge array of hand-selected pieces that are all really fun and unique.

I started driving back to camp during the early evening. The sun painted a golden shine over the landscape, illuminating all the trees and grape vines with glimmering shades of yellow and orange. I put on “Father and Son” by Johnny Cash and Fiona Apple, which is an Volkswagen ID.4 Electric SUV excellent rendition of the Cat Stevens classic. 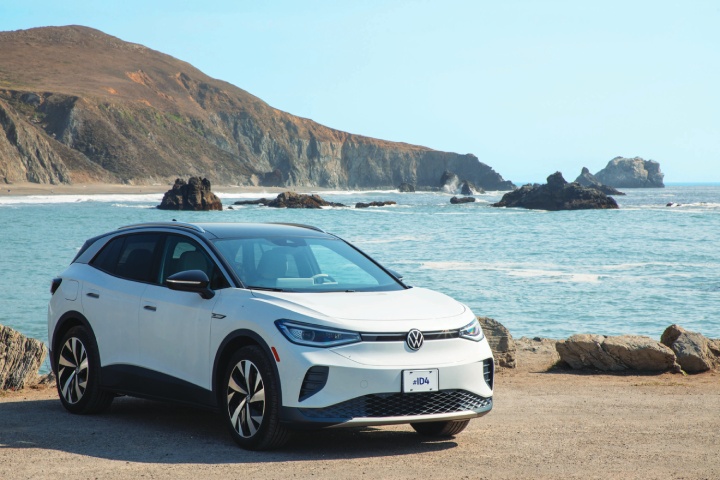 For the first time that day, I remembered I was in an electric car and checked the battery level. It had 100 miles left. The ID.4 is smooth, quiet, fast, powerful, and most importantly, reliable. The fact that I had forgotten I was driving an electric car proves how far they’ve come. Electric is the future. Fossil fuels are called non-renewable resources for a reason. At some point, everyone will need to make the switch, and with excellent, powerful, and stylish cars like the ID.4, I’m personally looking forward to it.

During my final night at Autocamp, I once again found myself staring up at the sky while lying in bed. I watched the towering redwoods, wondering how many more hundreds of years they might live for. They also reminded me of the importance of going electric. To save the world’s most epic wonders, we need to change the way we live. In just over 100 years, humans have managed to alter the planet in drastic and horrendous ways. These redwoods were here before me, and they’ll likely be here after I die, so what right do I have to cut them down, destroy their habitat, or suffocate them through climate change? What right does anyone have to do something so selfish?

Luckily, we have the power to change our planet’s trajectory. If an electric car like the ID.4 can impressively navigate winding mountain roads and long-distance excursions like the ones I took in Sonoma, then they’re surely more than equipped for the average person’s daily commute and a trip to the store. It’s time to admit that electric cars have become sleek, awesome, and powerful. Let’s protect our future and the future of beautiful places like Sonoma. After all, what fun would travel be without nature?

Build Your Own Backpack | Roam Luggage