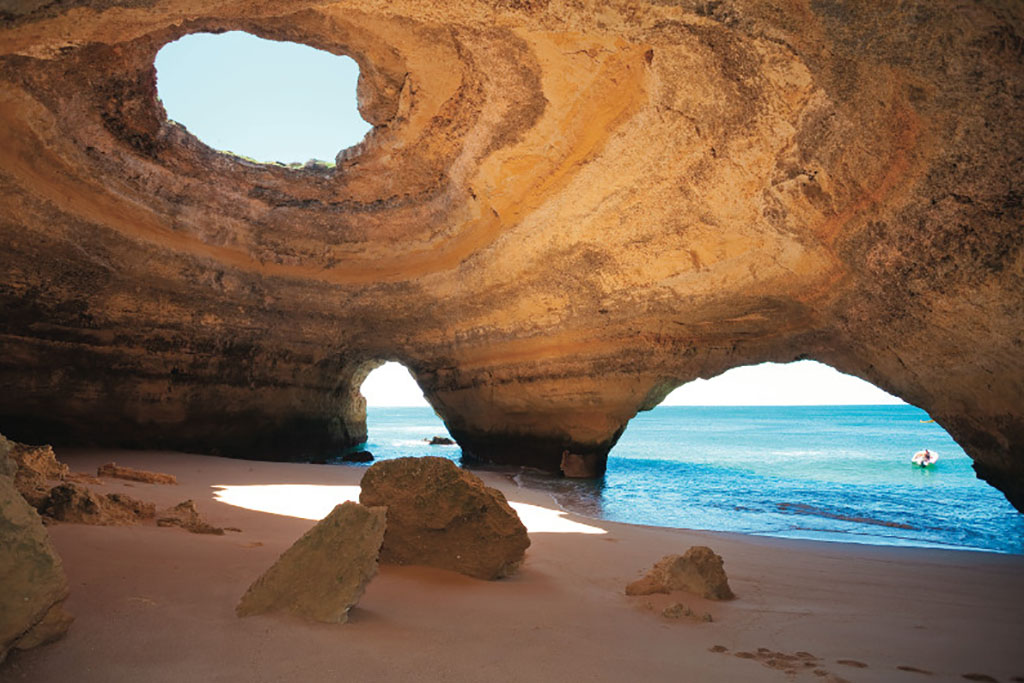 Knowing very little of Portugal beyond its grand capital city, I decided it was time to turn the tides and explore it for myself. Although my voyage of discovery would follow the dramatic coastline south of Lisbon, I figured that a galleon wasn’t the ideal mode of transport, so I opted for a rental car instead.

Positioned on the edge of the Iberian Peninsula, Portugal is the westernmost country in mainland Europe. There’s very little besides ocean separating it from the East Coast of the United States, perhaps explaining why the Portuguese were seafaring pioneers who were skilled at discovering new worlds, and why even today, they appear to be instinctively lured by the sea.

During the 15th and 16th centuries, an era known as the Age of Discovery, Portuguese sailors were vanguard explorers. Nobleman and Naval Commander Pedro Álvares Cabral is celebrated for discovering Brazil, while fellow explorers like Vasco da Gama discovered and mapped the coasts of Africa and Asia, establishing lucrative spice trade routes.

When news came of Christopher Columbus’ first voyage to the Americas in 1492 under the flag of the Spanish crown, a dispute arose between Portugal and Spain about exactly who’d discovered the New World. It was settled by the Treaty of Tordesillas in 1494, an agreement that divided newly discovered lands outside of Europe between the two countries. This agreement marks the start of centuries of Spanish and Portuguese dominance across much of the Americas.

Rather than discovering new worlds, today there are initiatives emerging throughout Portugal that endeavour to preserve the world that we know, with everything from luxury Lisbon hotels to remote rural businesses looking at ways to safeguard our planet. It’s also unnecessary to sail 5,000 km across a torrid ocean from Lisbon to find somewhere new and wonderful, because there’s plenty to discover within easy driving distance of this beguiling capital city, including wineries, national parks, dolphins, dinosaur footprints, and stunning gay beaches.

After collecting a rental car at Lisbon International Airport, our first stop was Lisbon itself. For gay and lesbian visitors, adjoining districts Bairro Alto and Príncipe Real have the most potent appeal. Here, you’ll find many stylish shopping and dining options, plus a vibrant nightlife scene, encompassing everything from live fado performances in an atmospheric bar to Beyoncé hits being spun in rammed gay clubs like Trumps and Construction.

Designed using the principles of feng shui, part of the hotel’s philosophy is to treat everyone equally regardless of factors like wealth, status, and sexuality. This idea of universal equality means there’s no downgrading when it comes to amenities in the 89 rooms and suites: all come fully loaded with state-of-the-art technology like plug-and-play- enabled LCD TVs, surround sound, ambient LED lighting, and free Wi-Fi, plus indulgences like Nespresso coffee machines, bathrobes, slippers, organic toiletries, and free access to the Inspira’s fitness room and spa with sauna, Jacuzzi, and Turkish steam bath. 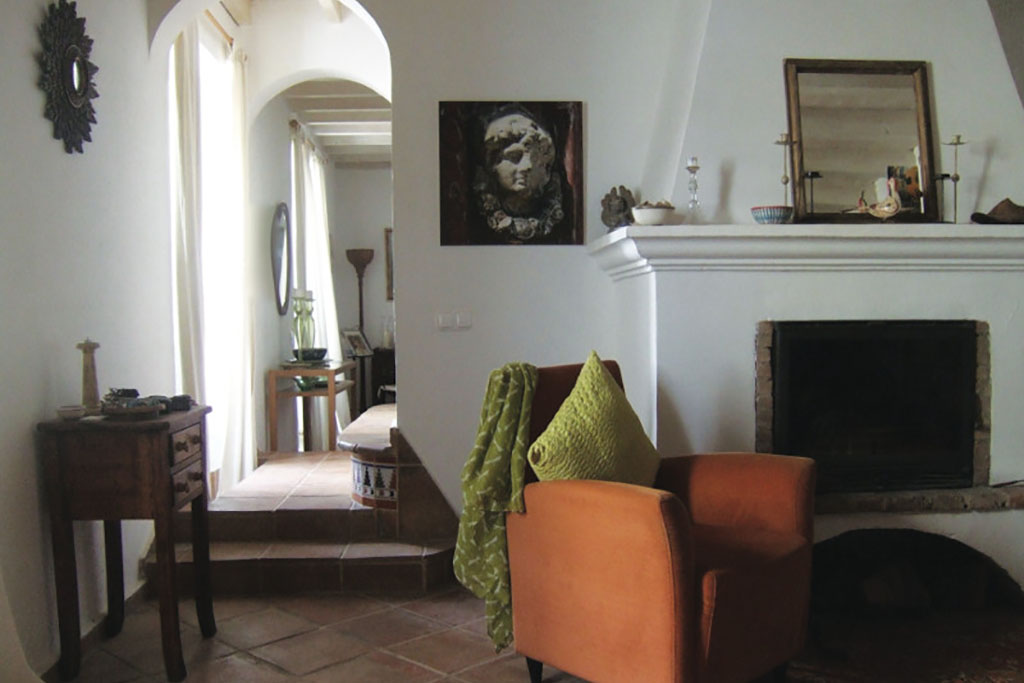 The secure underground parking lot even has free parking for electric or hybrid vehicles to promote sustainable mobility—although as many of Lisbon’s main tourist attractions are within easy walking distance, I’d advise you to explore on foot and burn calories instead of fuel.

The ocean is tantalizingly close wherever you are in Lisbon, so it’s easy to supplement a trip here with some beach time. Tourists tend to head west to the elegant resorts of Cascais and Estoril. Locals prefer to head south to the more casual and natural beaches of Costa da Caparica—that’s my recommendation too.

The most crowded beach is by Caparica town. Just 16 km from central Lisbon, it can be reached by car in around 20 minutes so it’s possible to come here after work, and that’s what many Lisbonites do! The easiest way to get here is to drive over the Ponte 25 de Abril suspension bridge. Often compared to San Francisco’s Golden Gate Bridge, it was built by the American Bridge Company and is in fact based on their San Francisco–Oakland Bay Bridge. You may also take a train or a ferry from Lisbon across to Cacilhas and then a local bus, but these options take considerably longer.

Dominated by high-rise apartment blocks and camping sites, Caparica has limited appeal, but beyond here there’s a sweeping expanse of beaches, and the farther south you go, the more unspoiled and secluded it gets.

From the boardwalk of Caparica a rackety little tourist train accesses 21 km of beaches, with stops approximately every km. At the end of the line is Fonte da Telha. Described as a fishing village, but in reality it’s no more a dishevelled cluster of shacks, beach bars, and fishing boats. It’s popular with surfers, kitesurfers, and hipsters, hence there are some effortlessly cool spots to eat and drink.

The rustic, whitewashed terrace of Cabana Beach Bar is ideal for toasting the sunset with a Sagres beer or a caipirinha cocktail, while Beira Mar is a casual beach restaurant specializing in freshly caught fish, which you can enjoy within earshot of the sea. Fonte da Telha is so laid-back that even the main road is covered in sand, so it’s definitely a place to wear flip-flops or go barefoot.

If you like to bare more than your feet at the beach, just north of here is Praia 19, the tourist train’s 19th stop. This stunning stretch of beach is where Lisbon’s gay community congregates and where nude sunbathing is permitted. The backdrop of dunes and woodland is not only beautiful, but also facilitates cruising—venture into the bushes behind the railway track, and you’ll encounter guys from across Europe and beyond.

To drive here from Lisbon, follow signs for Caparica then continue south all the way to the final beach access road, just before the main road veers uphill and inland. Take this dusty turn, passing various beach clubs, until you reach the last one, Bela Vista. Continue south on foot for approximately 1 km to Praia 19. If you’re approaching from the opposite direction, drive to Fonte da Telha then continue 1 km north along the beach on foot.

Farther south along the coast, Praia do Meco attracts gay sunbathers, although not nearly as many as Praia 19. In the 1970s, this idyllic spot was acknowledged as one of the first nudist beaches in Portugal, indeed in Europe, and remains popular with an alternative-lifestyle crowd.

Should the lure of the sea prove irresistible, you could consider staying near to Praia 19. Fonte da Telha has a couple of small hostels, but there are better options inland, such as four-star Evidencia Belverde Atitude Hotel. The dramatic black and gold swimming pool and decadent décor of this new hotel has made it a popular photoshoot location. I noticed a bridal fashion shoot and a magazine shoot with a pair of Portuguese TV stars during my stay. I also spotted other same-sex couples at the pool.

Surrounded by a residential urbanization, with just a small local bar within walking distance, the hotels immediate environs aren’t perfect, but it’s well placed for the gay beach, and for exploring the area south of Lisbon by car.

Just 20 minutes southeast of here by car is the charming village of Vila Nogueira de Azeitão with its abundance of gastronomic delights. There’s Azeitão cheese, a creamy and gooey chunk of deliciousness that’s handcrafted from raw unpasteurized ewes’ milk, thickened with cardoon thistle instead of rennet to give it a nutty, herbaceous flavour—it’s served with the top sliced off for you to scoop it out with a spoon or hunks of bread. Then there’s tortas de Azeitão (sweet lemon and cinnamon flavored rolls) and esses de Azeitão (traditional “S” shaped cookies).

It’s also home to Portugal’s oldest wine producer, José Maria de Fonseca. Founded in 1834, this family-run business is best known for its Periquita (table wine), and Moscatel de Setúbal fortified wine. The former family estate and old, cobwebbed cellars in the heart of Azeitão are open for tours and tastings.

A great place to sample the many tasty things on offer here is Casa Das Tortas 1910, a popular restaurant facing Azeitão’s main square. Its shady garden has an outdoor barbecue for grilling squid or skewers of Iberian black pork, another local speciality.

Continue driving for 35 minutes to this region’s southwestern tip, and you’ll reach Cabo Espichel, a desolate headland lashed by the waves of the Atlantic Ocean. You can gaze back from here along the coast, taking in Meco, Fonte da Telha, Praia 19, Caparica, Lisbon, and the distant resort of Cascais, but visitors don’t just flock here for the far-reaching view.

In the 14th century, local fishermen saw an apparition here, of the Virgin Mary riding a giant mule up the near-vertical cliffs. It’s said that the mule’s footprints remained when the apparition disappeared. These indentations were later identified as being prehistoric footprints of massive Sauropod dinosaurs. The small 15th-century Ermida da Memória (Chapel of Memory) was built on the cliff’s edge above the footprints. It became such a popular pilgrimage destination that a large religious complex, the Santuário de Nossa Senhora grew up around it from 1701 to provide lodgings, kitchens, and prayer space for the pilgrims. Today, there’s also a lighthouse here, while in a nearby bay, the 150-million-year old footprints of Theropod and Ornithopod dinosaurs have also been discovered.

Our next discovery was Setúbal, a 20-minute drive east of Azeitão. More a thriving fishing town than a pretty fishing village, Setúbal is nevertheless worth visiting if only to try the local speciality choco frito (deep-fried cuttlefish). The classic version is similar to calamari, but some places add the black cuttlefish ink to dramatically color and flavour the batter. For those journeying farther south it’s also a strategically advantageous spot, because from Setúbal you can take a car ferry across the mouth of the Sado Estuary to the beautiful Tróia Peninsula—if you’re fortunate, you may even spot some of the bottlenose dolphins that live within the estuary.

A narrow, low-lying sandbar blanketed by pine forests, much of Tróia is a protected nature reserve. Apart from a luxury resort on the peninsula’s northern tip, there’s relatively little development, so the landscape and beaches like Praia Comporta are truly unchanged.

The old fishing community of Carrasqueira also appears to be untouched by time. Here you’ll see traditional reed houses with walls and thatched roofs, and boats that are reached via creakily raised walkways.

Fly Free to Europe in 2018 with Emerald Waterways