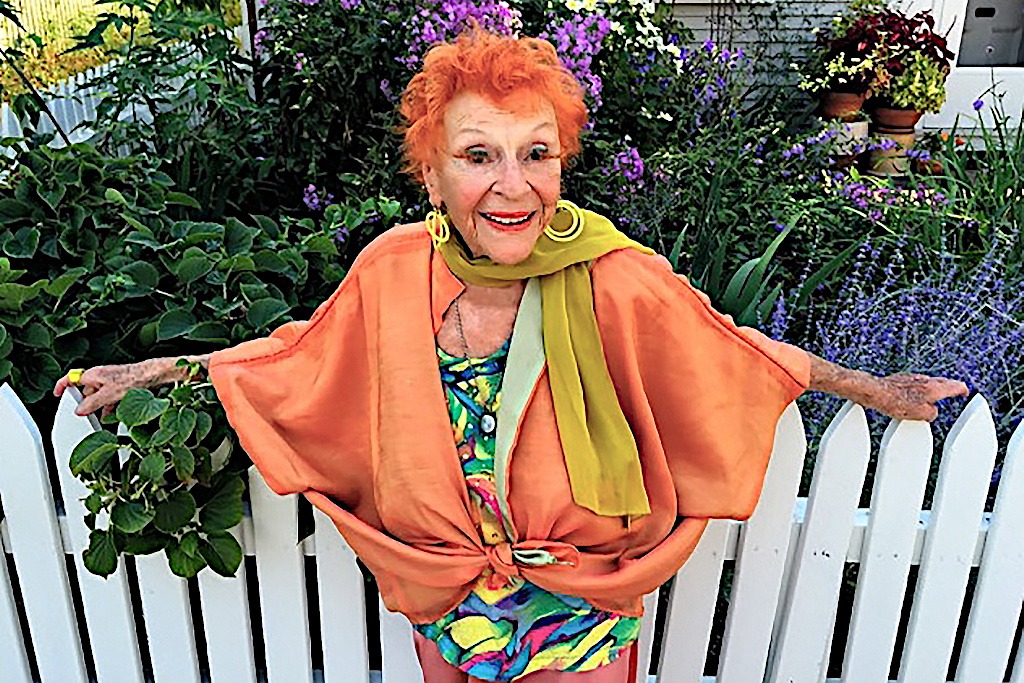 She is a vision in multi-colored scarves, bangles and dangling earrings. Her name is Ilona.

In 1983, I jumped into a car with a close friend and we headed off from New York City to Provincetown. It was Thanksgiving weekend and I was informed that we were on a journey, one that would be different and hopefully more enjoyable than any I had ever ventured upon. And my friend was right, for on this holiday romp, I met a very special person who continues to be a dear friend of mine till this very day.

We arrived at Karilon house, one of the first established art galleries in the East End of Provincetown. Already waiting for us there was a costume designer who was a friend of a friend. After settling into our spacious suite situated directly on the bay and literally steps away from the sea, there was a knock on the door. At first glance through the window I thought it was George C. Scott, but no it was Karen Katzel, co-owner of the house. It wasn’t till we opened the door that I saw a petite woman standing behind her. She was sporting a flaming red pixie haircut and was wearing two-inch false eyelashes created from cutting hair from her own head. She is a vision in multi-colored scarves, bangles and dangling earrings. Her name is Ilona.

“Every age has its doubts, expectations, and disappointments.
I learned not to expect or presume, it saves us disappointment.
No matter how well we plan something it can go differently.
Allow yourself to be open to what life presents.” 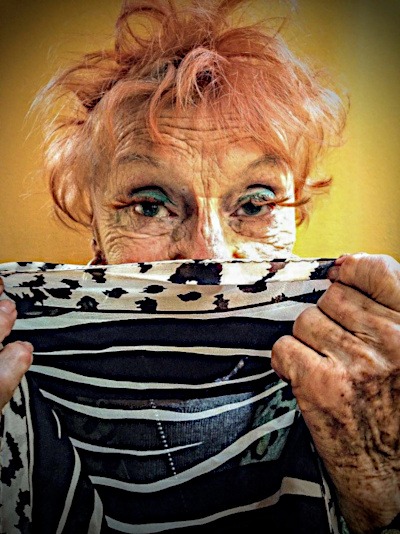 Ilona Royce-Smithkin is an artist, fashion icon, cabaret singer, landlord, and author. Before I gush anymore about Ilona’s talents and accomplishments, let me tell you want happened that Thanksgiving Day. Our costume designer had brought with him outfits and each of us had to decide if we were going to be Pilgrims or Native Americans for the Thanksgiving dinner celebration. It was absolutely politically incorrect, but remember it was 1983. And Lord knows we were gender bending before it became the norm. I chose to be Priscilla Mullins who came over on the Mayflower. (Remember, the Pilgrim’s landed first in Provincetown.) There’s a photo of all of us that Thanksgiving dinner, with Karen wearing a chieftain’s headdress, myself as Priscilla, and my hand stretched out to Ilona who looked more like a Brazilian Mardi Gras dancer than a Native American. This was a weekend/holiday of pure joy and laughter, but it was Ilona whom I would became so close to over the following decades. Over the years, each and every visit I made to Provincetown, Ilona and I would swim the length of the bay together. Looking back, I think this was a key element to her great health and longevity.

Ilona was born in Poland and studied at the Reimann Schule in Berlin and the Académie Royale des Beaux-Arts in Antwerp. She emigrated to the United States in the late 1930s and studied with Robert Brackman at New York City’s Art Students’ League. Her oils on canvas are reminiscent of the old masters, but she has also perfected the art of quick, breezy sketches. Sometimes it’s an ear, a hand, a full body, or often just an eye. 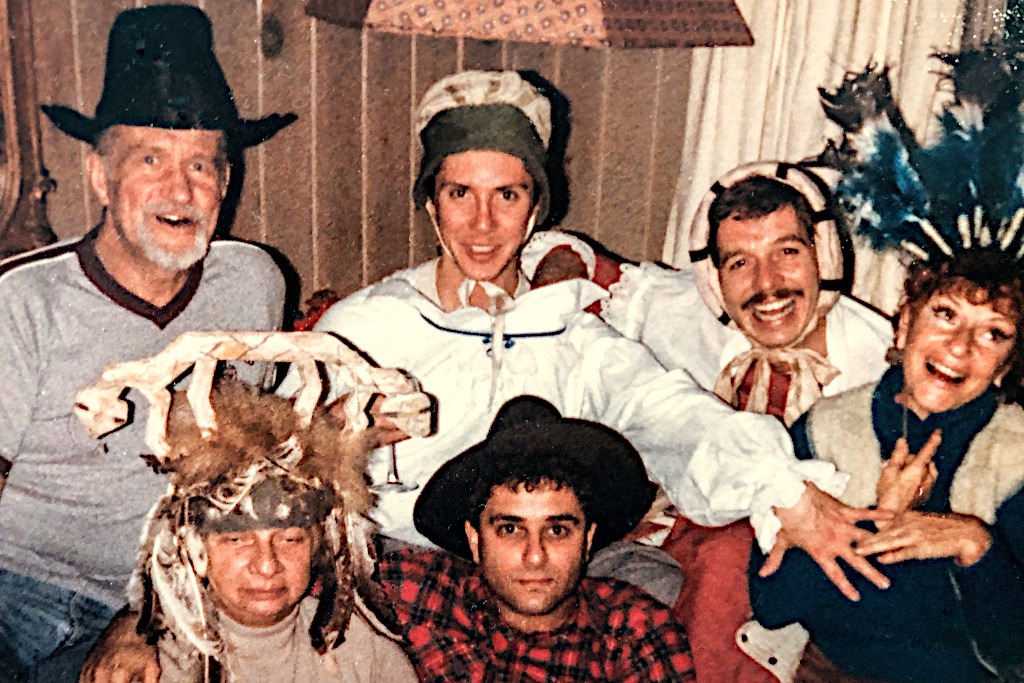 For many years she lived in a walk-up studio apartment in New York City’s west village, but now she lives full time in her third-floor apartment looking out over the bay in Karilon House. On a recent visit, and after managing the two very steep and narrow staircases up to her attic studio, I asked Ilona when and how she ended up in Provincetown.

“I was in a grey place in my life and I asked a travel agent to find me somewhere that was beautiful and inspiring; a place where I could paint and draw and she suggested Provincetown. I came in on the train in 1947.”

A lesbian who eventually met and became friends with Karen, also a lesbian, together they rented out Karilon’s 7-bedroom house. Note: you may have figured out that Karilon House is a mix of their two names.

4 doors down from Karilon House is Poor Richard’s Landing. More about the landing in a moment, but Poor Richard was Richard Lesicher and honestly, he wasn’t poor at all, but he was, like many in Provincetown, a creative who wore many hats. 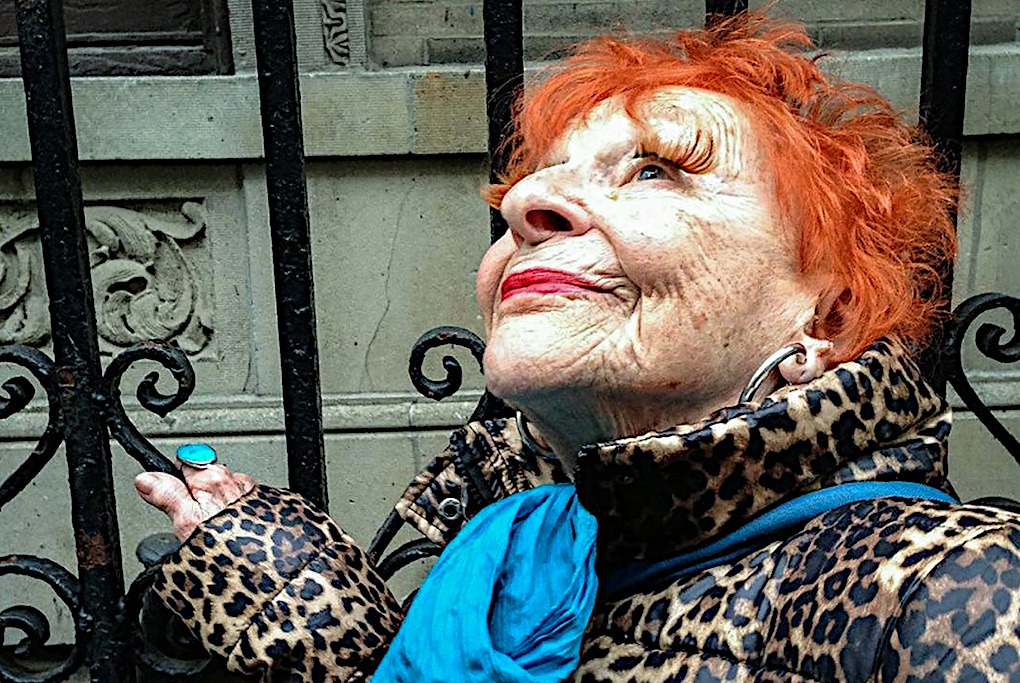 One day, Richard, a fabulous chef in his own right, threw a party for some friends. Ilona had just finished his portrait and he wanted to show it off, and one of those attending was none other than Tennessee Williams. Ilona recalls, “He was excellent company. We laughed a lot and he had a great sense of humor.” And when Richard unveiled Ilona’s portrait of him, Tennessee loved it. He then confessed to Richard, “I really don’t like being painted, but I like your portrait so much that I wouldn’t mind meeting the man who created this work of art.” Richard laughed, “You can but he is a she and she was sitting right next to you.” Of course, Tennessee sat for Ilona, so I had to ask what the session was like.

Ilona said that Tennessee exclaimed, “I can’t sit still.” And she replied without missing a beat, “Who’s asking you to?” She said she finally found the right moment to capture him and confessed it was like working with a child. 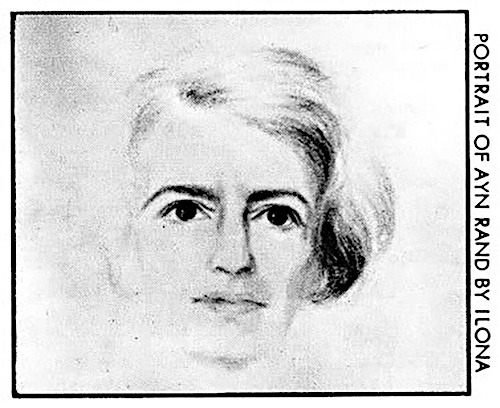 Over the decades she has done portraits of many other great people such as Bobby Short, the pianist and singer, and Ayn Rand, the controversial and highly successful writer. In truth, it was serendipitous how they met. Ayn was married to former actor turned painter Frank O’Connor and while he visited Provincetown to paint, Ayn joined him. Frank met Ilona one day and during a conversation it was revealed who he was married to and Ilona was so surprised because she was reading Ayn’s The Fountainhead at that time. The two would eventually meet and become close friends. As Ilona says, “Ayn did not like having her photo taken, but she trusted me and through our friendship, my portrait of her can be seen on the back of many of her books to this day, including Atlas Shrugged and The Fountainhead.”

In the 1960s Ilona began teaching art classes in Kentucky as well as Indiana and South Carolina. A great storyteller, her classes were as much about life, love, and wisdom as they were about creating art. In fact, she was so beloved that she was made a Kentucky Colonel by the state. Her following grew large and eventually she created and starred in her own PBS television series Ilona’s Palette. It was a huge hit, and she created a second series titled Painting with Ilona. Following the success of the television shows, she authored two books, Painting with Ilona and Finishing Touches with Ilona.

“When I started to teach, I discovered that I had something to
give. What I try to bring to people through painting is a joy an understanding of themselves. Be kind to yourself, the love starts within.”

Over the years Ilona would spend winters in New York City and the other three seasons up on the Cape. When Richard Leisher passed away, Ilona and Karen Katzel purchased Poor Richard’s Landing. 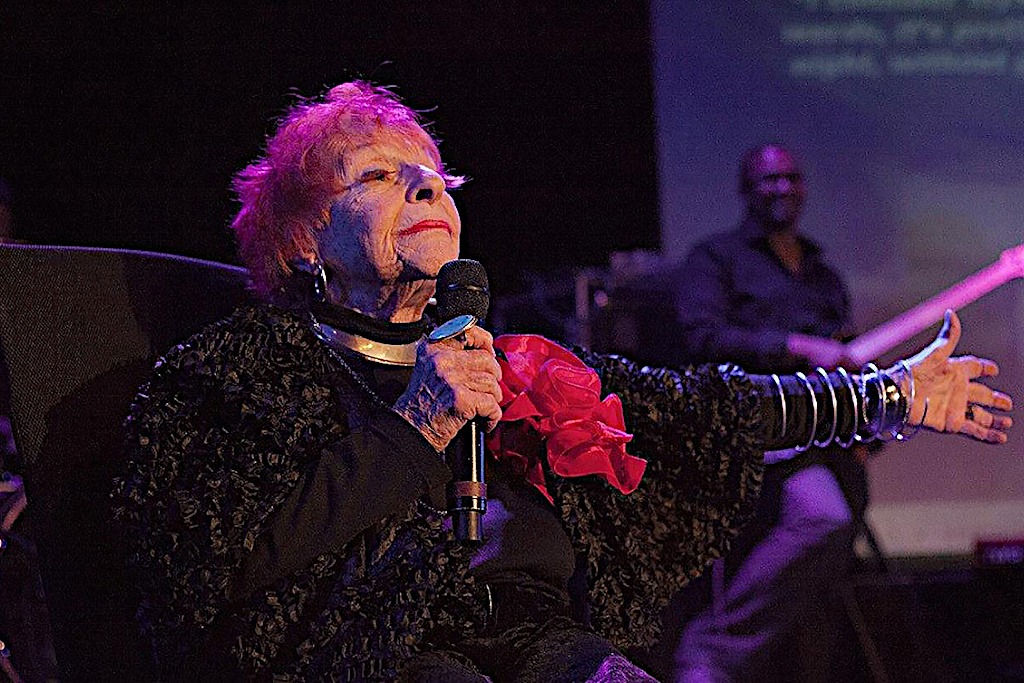 For years Ilona would teach and exhibit at the Provincetown Art Association and Museum (PAAM). In her early 80s she experienced a desire to perform on stage and created her “Eyelash Cabaret.” With Zoë Lewis accompanying her at the piano, she often performed her show at PAAM, the Laurie Beechman Theatre in New York City, as well as other venues along the East Coast. Reminiscent of Piaf and Dietrich, Ilona would sing exotic, if not racy songs, and at the end of each performance, she would sketch a beautiful eye, right in front of the audience.

“It’s the here and now that matter most.”

Now 99, Ilona finds herself busier than ever with interviews as well as being the subject of documentaries. She’s also been the face of Karen Walker’s eyewear. Ilona has been featured in New York Magazine, Time Out New York and Time Out London, The Huffington Post, StyleLikeU.com, and LX-NBC.

My preferred place to stay in Provincetown is Poor Richard’s Landing (439 Commercial St, Provincetown, MA. Tel: 508-487-3143.). The wharf of studio apartments here are quaint, beautiful, rustic, and seriously dangling out into the bay. Back in the 30s, the Avellars, a Portuguese family transformed the landing into an artist’s haven, offering inexpensive housing. Mrs. Angelina “Ma” Avellar would cook their meals and eventually she befriended such writers as Sinclair Lewis and Eugene O’Neill, before they became famous. 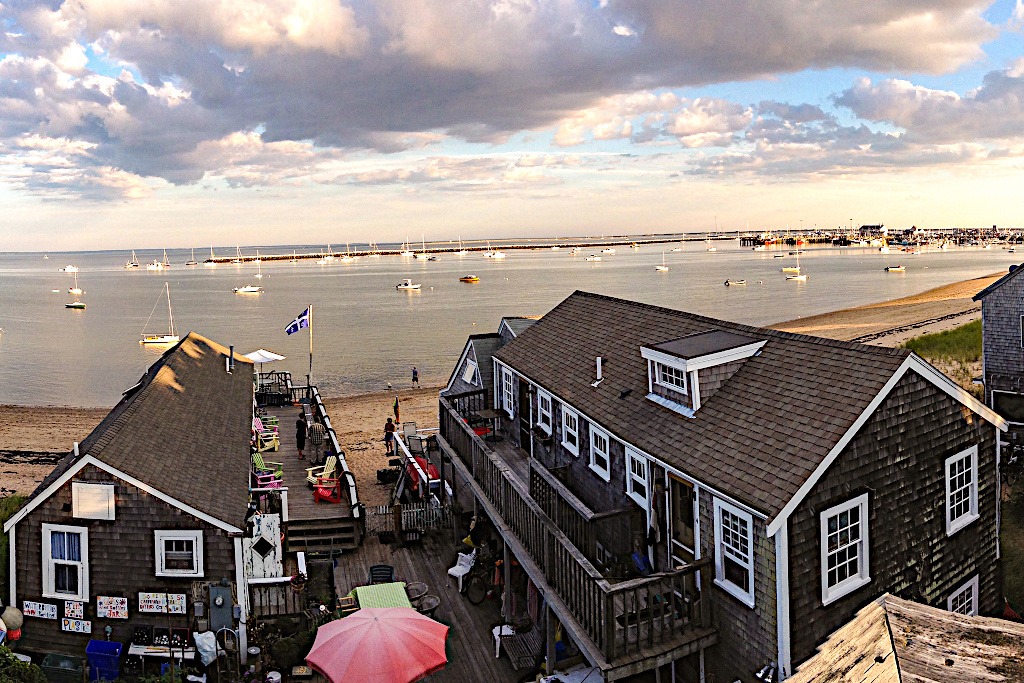 The tradition continues today with Ilona as the owner of Poor Richard’s and managing the property are Sarah Thompson and Diane Stafford. More recently, artists who have stayed and created at the Landing are John Waters, Michael Cunningham, and Kate Millet. During the Provincetown Film Festival Christine Vachon, Pat Moran and Chuck Yeaton make the Landing their home away from home.

When I visit Ilona nowadays, we no longer swim the length of the bay, but she does walk the shoreline as often as she can. Never happy resting on her laurels, Ilona has recently published her latest book, Joy Dust, with fellow painter and writer, John Mark Lucas. The book is a collection of short-short stories offering Ilona’s unique life experiences and advice. I asked her co-author, John, if he’d offer us a little insight into the book and his relationship with Ilona. 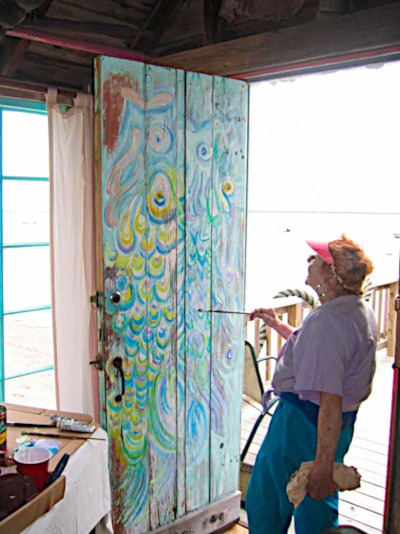 “I met Ilona in the early 90s in Provincetown. We connected as painters, and twenty-five years later our friendship has matured into spiritual confidants and creative sounding boards. When she asked if I’d help her publish Joy Dust. I was in 100%. She made it clear she didn’t want a sugar-coated version of aging; she wanted to tell the truth, but also share her positive vision about life, love, and what joy dust means to her.”

“…I treasure the peace i have here. The quiet, which once frightened me as being alone, is now precious. I drink it all in. Thirsty to hold on as long as I can.”
—Ilona from Joy Dust

During my last trip to Provincetown, Ilona invited me over to her third-floor apartment. Of course, I couldn’t show up empty handed so I brought a bottle of her favorite vodka. In thimble size glasses we toasted and then she disappeared into her stacks of artwork, some reaching way up to the ceiling. To some it would seem chaotic, but Ilona knew exactly where everything was and suddenly she pulled out a sepia sketch of a very young man. She smiled and said, “For you.” It was my portrait she had created so many decades earlier. Tears rolled down my cheeks as I embraced her. It now proudly hangs in my New York City apartment.

Ilona would want me to keep this short and sweet, just like she was. On August 1, 2021 at the age of 101 and a half, she passed on. She lived her life her way with brilliant creativity, strength, resilience and gratitude. If you were lucky enough to have known her, she would have gladly sprinkled you generously with Joy Dust. RIP 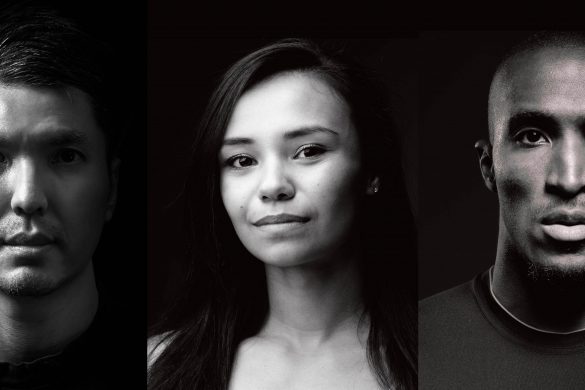 We must eradicate poverty, injustice, and corruption just as quickly as any other disease that threatens our lives. 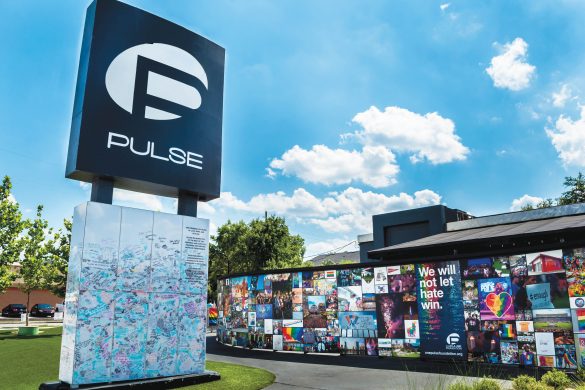