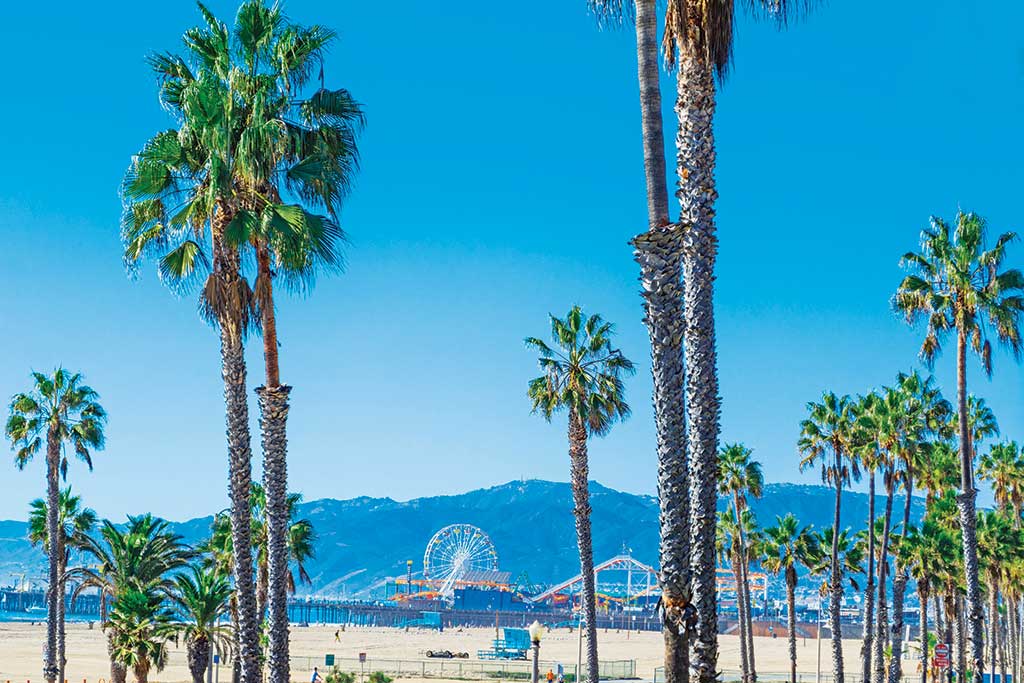 Esalen is home to one of several geothermal hot springs in the region and between 1 A.M. and 3 A.M. nightly about 30 lucky travelers can spend time bathing in them in near pitch black surroundings.

The boys who bronze themselves in their tiny Andrew Christian bikinis have already gone home for the day as we zoom past gay Ginger Rogers Beach in our candy-apple red Camaro convertible.

The amusement park at Santa Monica Pier is as good a place as any to begin a road trip. On weekends, the rhythm of the expectant crowd is as constant as the nearby waves lapping up against the shoreline. Visitors come to snap an Instagrammable photo of the coast from atop the solarpowered Ferris wheel, ring toss their way to a stuffed-animal win, and eat foods that shock the digestive system, but are so delicious. In short, it thrums with anticipation.

One attraction of the pier is that it’s become the official end point for Route 66, the historic two-lane excursion that begins in Chicago and ends in Los Angeles. Although most folks who take a picture in front of the “End of the Trail” sign have not actually completed the journey, I did just that last October (and chronicled that adventure for Passport) so it’s fitting that my next road trip begins exactly one year later in the very spot where my last one left off. 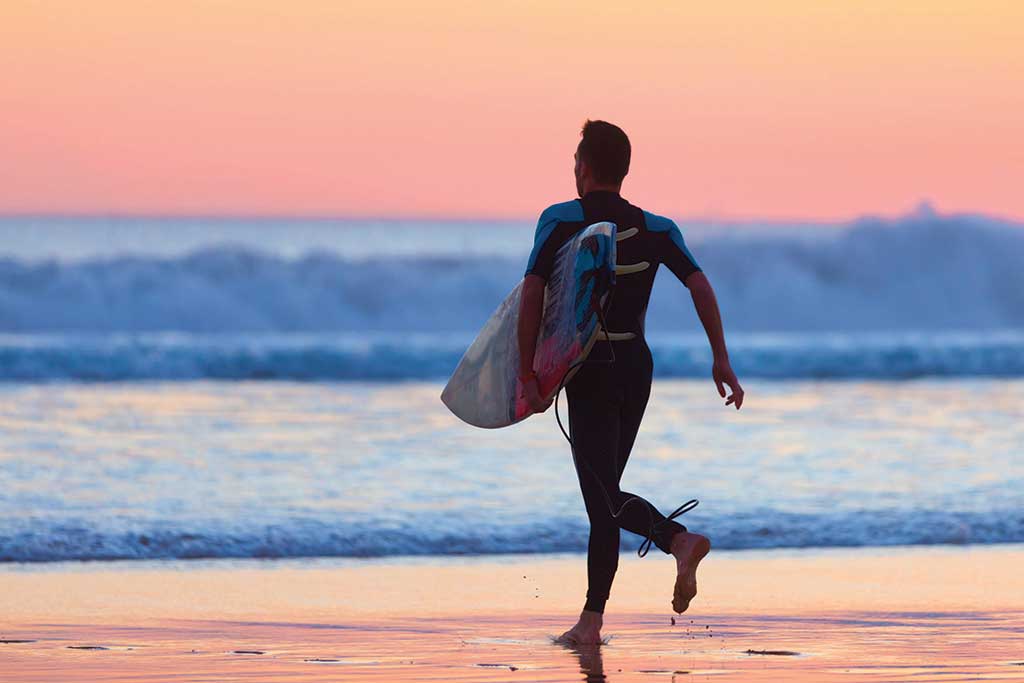 I first drove the Pacific Coast Highway (aka Highway 1) in 1996, just several days after I graduated from the University of Iowa and made the move out West. Noted for its hairpin turns, scenic vistas, and having two iconic cities as its suggested beginning and end points, the road was everything my 22-year-old self wanted it to be and so much more. Four years later, I took the same journey again, and every four years I did it again and again, and again. It has now become a quadrennial tradition of mine to drive the PCH from LA to San Francisco. This year marks my 20th anniversary, and my friend Zac and I are taking five days to do it just right.

The boys who bronze themselves in their tiny Andrew Christian bikinis have already gone home for the day as we zoom past gay Ginger Rogers Beach (Will Rogers State Beach) in our candyapple red Camaro convertible (a cliched choice, but an essential one regardless). A late afternoon start means we’re chasing daylight, but it also synchronizes our drive through fabled Malibu at that magic hour of the day when every warm color in an artist’s palate decorates the sky while reddened surfers emerge roadside to shimmy out of their wetsuits and shake off the salty water. At Mugu Rock at Point Mugu Beach, we have a Thelma and Louise moment and snap our first vacation selfie.

Our first detour off the coastal highway is sleepy Ojai (pronounced oh–hi), an inland city that has become somewhat of a battery recharger in recent years for weary Angelenos. There’s very little to do in town and that’s exactly the point. Although its reputation as the Southland counterpart to Northern California’s Big Sur isn’t quite apt, the desk clerk who checks us in at the hipster-ish Ojai Rancho Inn looks like she’s been hypnotized by a crystal or two in her day. 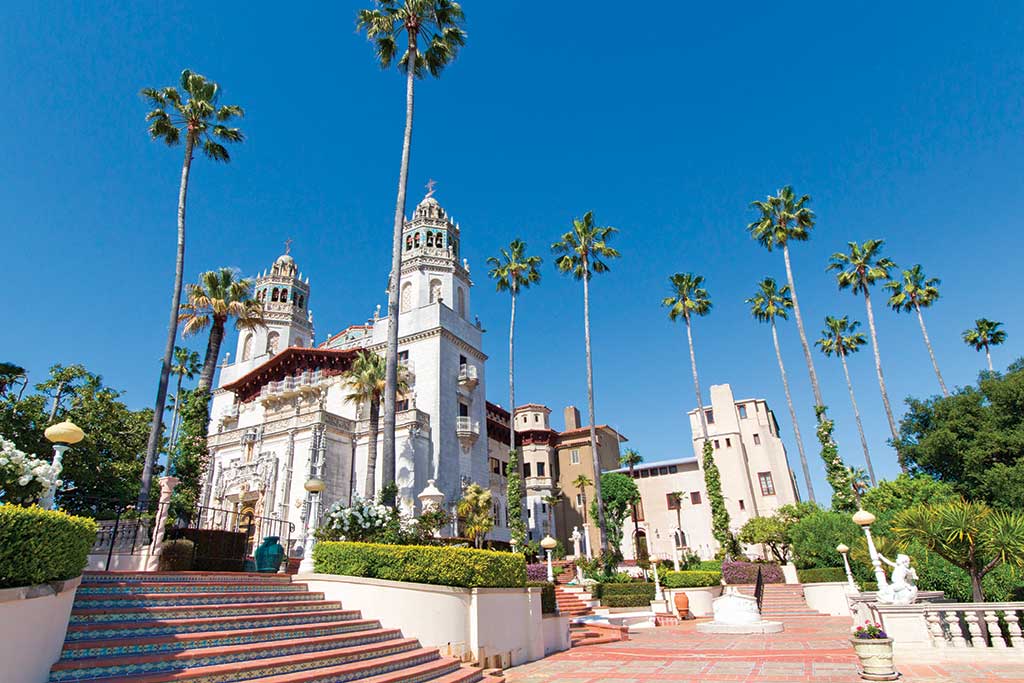 Zac and I both agree that our server at Agave Marie’s Restaurant and Cantina, a passable downtown Mexican eatery, isn’t old enough to drink the pixie tangerine margarita he recommends to us, but that once he gets his braces off and has a few years of manhood under his belt, he’ll break a few hearts. Back at our inn, there is the rustic-chic beer and wine bar Chief’s Peak, and with Zac’s pint of ale and my glass of smoky pinot noir (that’s big enough to swim in), we sit poolside and breathe in the crisp autumn air that has seeped into this tiny Cal town.

The following morning is spent jogging the Ojai Trail, a paved bike and running path and masterstroke of city planning that extends some 20 miles all the way to the Pacific Ocean. Afterward, Zac and I enjoy a few Hockneyesque moments splashing around in the sun-drenched pool followed by breakfast at Bonnie Lou’s, a tasty greasy spoon without the grease.

Our journey today is a bit of a cheat: We’re only driving an easy 32 miles to sunny Santa Barbara, a coastal city so exquisite in beauty that the entire town resembles a museum piece: look, but don’t touch. Actually, there was a time in recent history when a cluster of drab warehouses near the waterfront known as the Funk Zone interrupted an otherwise perfected stroll between Stearns Wharf and the city’s Spanish-tinged downtown. Those warehouses have since been converted into an irresistible collection of antique furniture stores, hip wine tasting rooms (more than 20 of them), and outdoor eateries. The tide of gentrification that swept in these new businesses brought with it the Wayfarer, a boutique hotel that includes four shared hostel rooms among its 27 private ones. Aside from the low flow shower head (an issue we’re certain is specific to our room), the hotel is perfectly suited to our liking. 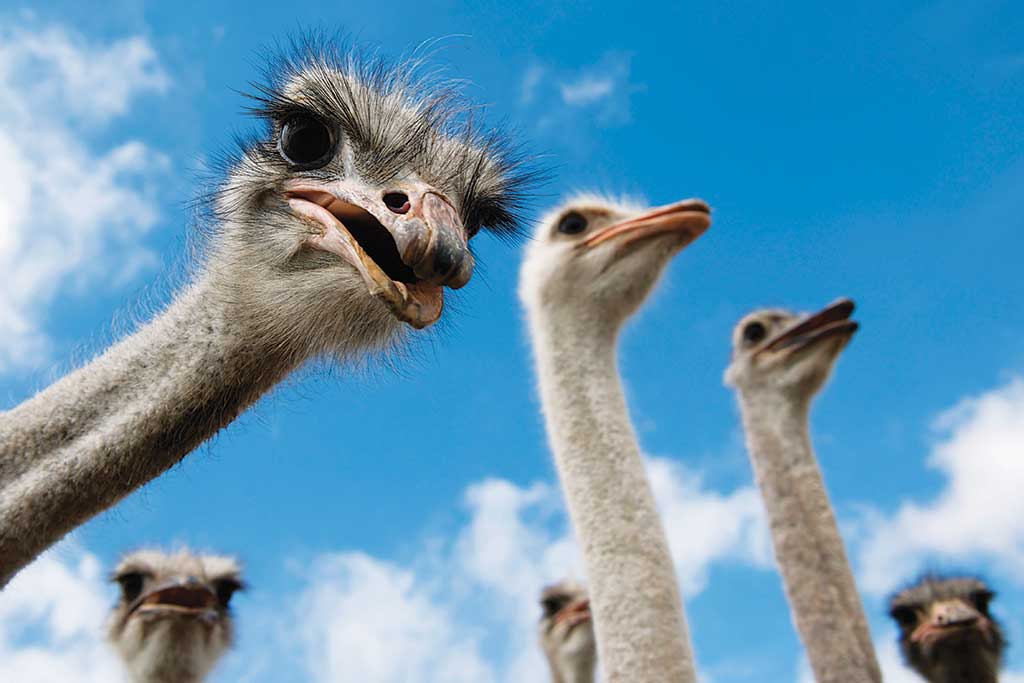 A quintet of gay men dining alfresco signals to us that we’ve arrived at the right eatery. The Indonesian food at Cal-chic Sama Sama Kitchen includes grilled lemongrass short ribs and crispy duck cooked in banana leaves and Balinese spices and is as every bit as tasty as those boys are good looking. Afterward, a gentle shove is all that’s needed to roll our stuffed bodies down the street for two scoops of McConnell’s Fine Ice Creams, a Santa Barbara legend since 1949.

To call the Wildcat Lounge a gay-friendly tavern is an understatement: the bar’s interior is the color of Dorothy’s ruby slippers. Sunday is “Gay Night” but judging from the coterie of young Adam Lamberts queuing up for Monday karaoke, it’s hard to believe there’s just one night that’s gay. Zac croons like nobody’s business, and on this night he grants a longtime wish of mine by joining me onstage for a duet of Heart’s “Alone” (which we’re proud to say generated a few compliments).

DAY 3
Zac and I are running around naked on the sand at crescent-shaped Pirate’s Cove in Avila Beach, snapping pictures, and enjoying a burst of late-afternoon sun on our shoulders. In an unexpected instant, a sudden wave leaps right toward us and snatches every stitch of our clothes, beach towels, and electronic gear while trying to drag them all into the sea. But this bit of beach chaos is actually how our afternoon ends, not begins.

First, we rise and shine with the anticipation of putting numerous miles between us and sunny Santa Barbara and with hopes of reaching the most fabled parts of the highway by day’s end. As the city’s cloistered bubble fades in our rearview mirror, the road swings inland toward a parched and jaundiced landscape, still thirsty for the torrential rains it doesn’t yet know will slam it hard in a few month’s time.

Ostrichland USA is a working emu and ostrich farm and roadside attraction off HWY 101 that provides a novel distraction on the road to Scandinavian-themed Solvang. The six-dollar admission to the place includes a dustbin full of birdseed and a close encounter with as many oversized avians as you can handle. Their jutting necks are shaped like question marks, but from these birds come only demands for food, and having a dozen of them poke and peck at us while we laugh uncontrollably is the most fun ten minutes we have all morning. 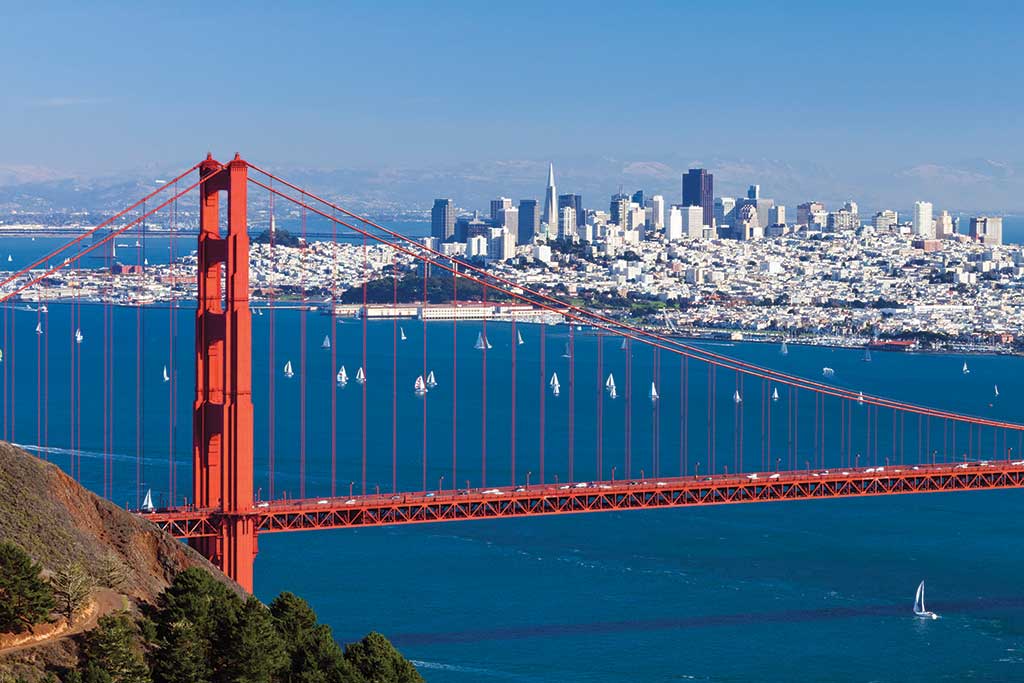 In between Ostrichland and our nude beach adventure is Presquile Winery, an esteemed vineyard that is just one reason the Central Coast wine country is soaring these days. Unlike some of the wineries in Sonoma County and Napa that try and mimic the chateau ambience of their French counterparts, lovely Presquile is minimal, modern, and refreshingly low key on this Tuesday afternoon. We sip and swill a handful of varietals, which slight drunkeness prohibits us from remembering (although I’m pretty certain there was a chardonnay, a Riesling, and a syrah in there) while noshing on a charcuterie plate.

Highway 101 swings back toward the coast at Avila Beach, one of a handful of lazy coastal towns that feels like a throwback to a version of California that existed long before developers rushed in to build strip malls and fast food restaurants where orange groves once thrived. It’s here that we make the easy hike to clothing-optional Pirate’s Cove Beach, and it’s here where the aforementioned wave threatens to ruin our day. Although we can laugh at our drenched clothes, Zac’s soaking–wet smartphone is less funny, and we quickly put pedal to metal and head to our hotel a half an hour up the road on the PCH to assess the damage.

At Moonstone Landing in teeny Cambria, families and couples are swaddled together in Pendleton blankets awaiting the setting sun from the cozy confines of their oceanfront balconies, while the teens and millennials among them stare at their smartphones. Zac tends to his drenched device (which turns out to be fine) while I enjoy the majestic sundown show.