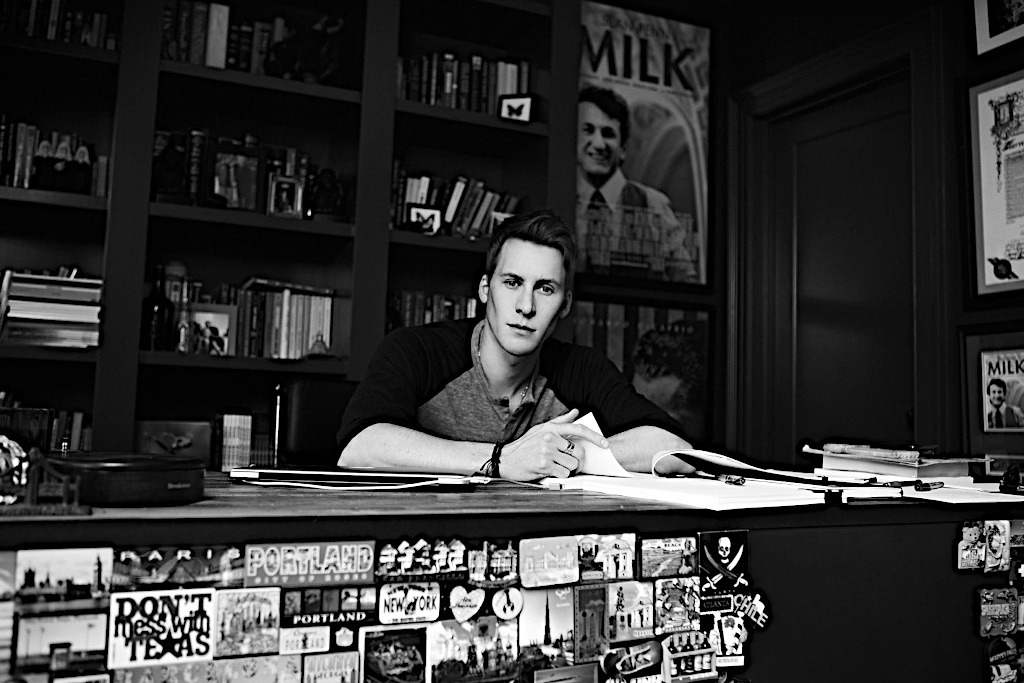 When he accepted the 2009 Academy Award for Best Original Screenplay for Milk, Dustin Lance Black made a bold promise to LGBT youth that, “very soon, you will have equal rights across this great nation of ours.”

When he accepted the 2009 Academy Award for Best Original Screenplay for Milk, Dustin Lance Black (www.dustinlanceblack.com) made a bold promise to LGBT youth that, “very soon, you will have equal rights across this great nation of ours.” Black would do his part to make that happen as a member of The American Foundation for Equal Rights (AFER), which helped overturn California’s Proposition 8 and caused a domino effect that ultimately led to federal marriage equality.

Black, 44, also brought LGBTQ lives, struggles, and representation to screens with the 2017 TV miniseries When We Rise, the 2011 J. Edgar Hoover biopic J. Edgar and that same year’s 8, the play about the Perry v. Schwarzenegger Proposition 8 court case, a 2008 Pedro Zamora biopic, and other projects. His most deeply personal work to date, however, would have to be his new book, Mama’s Boy, which recounts the life of his strong-willed mother, Roseanna, who relied on crutches due to polio, which she contracted as a child, but went on to raise three kids and make a career in hospital laboratory work, and their loving relationship despite her firmly held religious and conservative political beliefs.

Raised in a San Antonio, Texas Mormon household, Black would funnel his religious background into the HBO series, Big Love. In 2014, he and UK-born World Champion diver Tom Daley went public about their relationship and were married in 2017. In late June 2018, the pair became fathers to a baby (born via surrogate), Robbie Ray Black-Daley, and made another first a few months later as the first same sex family to be enlisted as Pampers brand ambassadors.

Currently based in London, Black is preparing a couple of new TV and film projects, which he discusses, along with his book, his mother (who passed away in 2014), and life with Daley, in the VIP Lounge. 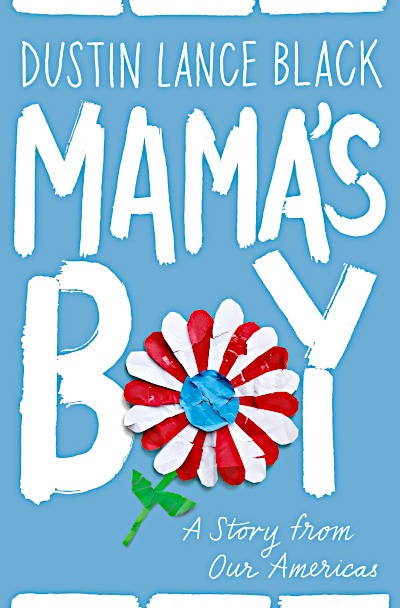 Did writing this book serve as a catharsis and epiphany? You revisit conservative places where you grew up in order to repair broken relationships with family and members of your former faith.
Yes. That’s the design of the book. It was a process. As I was writing it I had to challenge myself to do what my mother did for me. Although she was conservative and held homophobic beliefs, she showed the courage and curiosity to fly to California and meet and talk with my LGBT friends, and I saw how that changed her perception and created understanding. If I was going to be true to her spirit, I had to do the same. It’s not a one-way street. I’d say the big epiphany was how much easier it was to find that common ground [with conservatives] than I ever imagined and how much less scary, and enjoyable, it was to sit across from someone in person and share stories while you look them in the eye.

Are you and Tom thinking about having more kids? And how many do you want?
Of course. Eleven. The size of what we call in the USA a soccer team. Let’s see if we can form our own.

Sounds like a reality series to me. Have you guys been approached about doing one?
I think Tom has, but there’s no time for that. To do what he does at the level he does, he’s practicing six hours a day six hours a week and when he’s not practicing he’s in active recovery, which is stretching or doctor’s visits, and I’m hard at work not only being father to our son when he’s away, but now that we’ve won marriage equality I’m back in the movie business doing a series for FX.

And what can you tell us about the FX series?
It’s called Under The Banner of Heaven, which is an adaptation of Jon Krakauer’s book that does a deep dive into domestic religious fundamentalism, namely the Mormon Church I hail from. A true story, ten-hour miniseries.

You also did a podcast in December, “Surrogacy: A Family Frontier,” for the BBC, which is available for free through Apple.
That was just nominated for a British podcast award!

What else is in the works now that you’re ramping up TV and film projects again?
One that I’ve been fighting tooth and nail to get to screen for years is the Bayard Rustin story. He was one of my early, most fervent inspirations and great heroes. He stands at the intersection of so many things I care about. I come from a very working class home and he fought for the workers, for the peace movement, for civil rights and organized the 1963 March on Washington, and he was an openly gay man long before Stonewall. I find his story incredibly inspirational and necessary right now, because he gets us to step outside what I call the ‘Discrimination Olympics’ these days, where I think so many are racing to define themselves as the most discriminated against, as if that somehow wins you a prize. I do believe in examining our differences, and how we’re treated unfairly is important work, but the prize is building a coalition and creating a connection and alliance with another group being treated differently under the law. Maybe not as badly as you are, but you can both draw strength from an alliance and Bayard was a master at that. So I would love to bring his story to screen. We’re working on it. 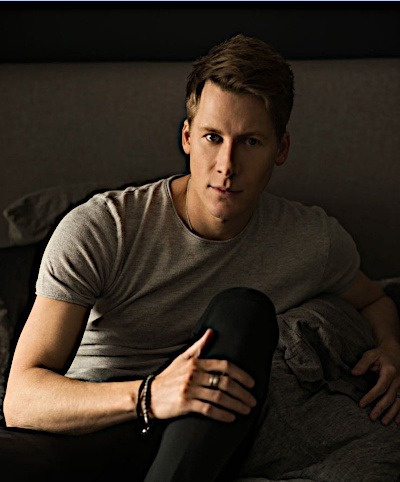 Can you drop any names you have in mind for that?
We have a handful of tremendous openly gay African American actors who can play a role like that, and unlike when we made Milk, agents and managers aren’t trying to closet them anymore. We went on such a search for openly gay actors who could play all these parts, and it was almost impossible outside the theater world to find an agent or manager who would admit they had a gay client. Things have changed in a positive fashion. That’s as specific as I can get, but it’s far along. Just a final push we have to make to get it made.

What’s a secret Tom Daley fitness tip that he taught you at home?
’Don’t eat that.’ Yeah. I hear that a lot. Particularly ‘don’t eat that in the middle of the night when you wake up.’

What have you eaten while traveling that is delicious enough to completely ignore him?
In Montreal, I was there for a day and a half to see him compete in the FINA World Series, I had what they called an almond croissant. Let me tell you, I know almond croissants, I’m not shy about my love for almond croissants, but this had been sliced in half, with a layer of custard, roasted, and a layer of powdered sugar. What the devil? I ate the crap out of that!

What has Tom taught you about being a good tourist in the UK?
He’s taught me which direction to look when crossing the street, which is truly lifesaving.

What are your tips for gay parents?
The best parenting advice we got was not to listen to anyone’s parenting advice! The best manual you get will come wrapped in a little blanket, and he or she will tell you what they need and when they need it. So don’t pay too much attention to too many parent’s advice because they have different kids than you do.

What do you play music-wise to entertain Robbie Ray?
Jazz. Tom gives him his first bottle in the morning, then goes off to practice, and Robbie Ray seems to like hanging out with me and a good jazz playlist. We boogie down to it, and more often I miss deadlines because we’re dancing around the office.

Is there a most underrated city you think we should visit?
So many! I think Americans have misconceptions about China, and Shanghai is a worthy visit. It’s a fascinating place. If looking for a good time, don’t forget about Budapest. It’s a fun city. It’s filled with history, but they’ve turned these spaces where so many heartbreaks in history took place into festive, colorful, vibrant spaces to eat and drink and be merry well into the evening. It’s always lovely to me when you can turn tragedy into magic, and I think that’s what Budapest does.

Finally, who would you most love to have high tea with?
Well, the Queen of course! I don’t think small. She’s fabulous. I was always a little skeptical of what this UK monarchy was, as an American we’re taught to question such things. But then you get to know the Queen and a bit of her personality when living there and she just seems fabulous.