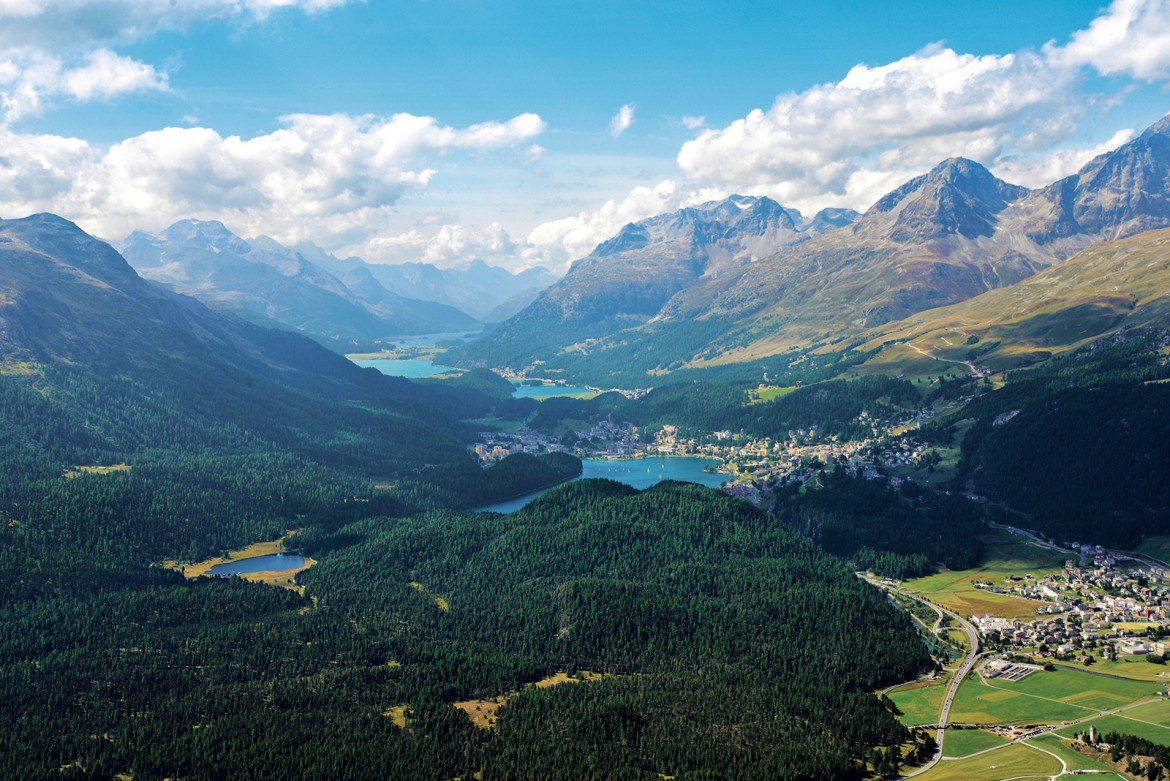 In the recent film Clouds of Sils Maria, Juliet Binoche plays an anxiety ridden, aging actress tackling a part in a play she resents having agreed to appear in. To escape the pressures of her situation and to rehearse, she finds some peace and calm in the mountains of the Engadine region in the Swiss Alps. In a defining moment of the film, she stands on a mountaintop with her trusted assistant and confidant played by Kristen Stewart and intensely searches for a line of clouds that move like a snake and dramatically envelope the mountains with magical effect.

My partner and I were invited to a grand birthday celebration last August in the legendary mountains Binoche was so enamored with in the movie. We landed in Zurich and took three trains to get to our village. The train ride was a great introduction to the jaw dropping scenery and I barely got through 2 pages of my novel because I didn’t want to miss a thing. There was a 20 minute wait in between one of the trains, so we went to the convenience store to buy some local cheese and to breathe in the fresh mountain air, so appreciated after the polluted and still air of Paris in the summer.

Our final train ot the day brought us to Scuol, one of the larger villages in the Lower Engadine region, with a population of 2,400. Its most famous attraction is the mineral springs and thermal baths that attract preople from around the world

We checked into the Guarda Val (www.guardaval-scuol.ch), a hotel consisting of two traditional Engadine houses from the 17th and 19th centuries. Renovated in 2008, the 36 room hotel is a hybrid of time honored Swiss décor and contemporary design. Chef Rene Stoye uses mostly local and organic ingredients to create an inventive menu of treasured Swiss dishes. Some of our favorites included white and green celery with walnuts and apple sorbet; lukewarm beef fillet with forest mushroom brioche, onions, and sauce Bearnaise-foam; and the fillet and leg of veal with beans and saffron risotto from Maggia valley.

Our generous sized room had a long terrace and every morning we were hypnotized by the clouds moving over the mountains. We ventured to the spa in our plush bathrobes later that afternoon (there’s an indoor passage from the hotel to the spa) and relaxed in the thermal baths and opened up our sinuses in the steam room.

That evening, we ambled around the cobblestone pathways, venturing into all the nooks and crannies of the village. We were charmed by the window boxes overflowing with Technicolor red and pink geraniums and the hand etched murals on the fronts and sides of 16th century homes.

It was an important birthday for my friend (one that ends with a zero) and he pulled out all the stops to celebrate with three major events. One night was a cocktail and dinner reception at the newly renovated Pensiun Aldier (www.aldier.ch), originally built in 1865, located in the storybook charming village of Sent (think Heidi!). Owners Carlos and Suzanne Gross recently sold their business in Italy and fulfilled a lifelong dream to open a small hotel. Carlos has been a passionate art collector for many years and the hotel is dedicated to two of his favorite artists, Alberto and Diego Giacometti, and photographer and publisher Ernst Scheidegger. The collection of graphics and drawings by Alberto Giacometti is the pride and joy of Carlos, and his extensive collection, open to the general public as a museum, is housed in the vaulted cellar of the hotel. 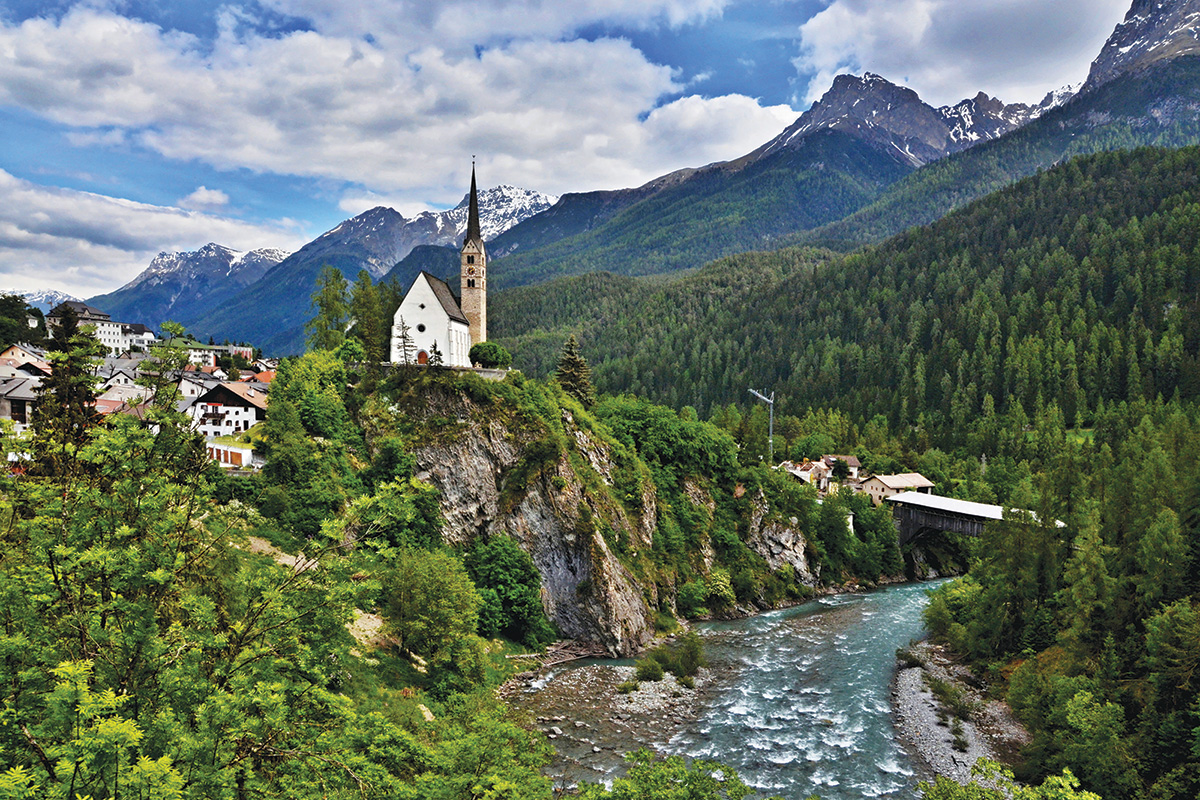 The 13 double rooms, junior suite, and two suites, all individually decorated, have been updated with mid-century modern furniture of designers such as Le Corbusier, but still retain classic Swiss mountain elements of linoleum floors covered with goat’s hair rugs to warm your feet. The main floor contains an honesty bar, where one pours his own while remembering their tab. A cozy pine paneled lounge with plush leather club chairs is the perfect place to have an aperitif or hot chocolate. The restaurant serves a menu using local ingredients whenever possible.

Not Vital is world renowned sculptor and artist who was born and raised in the village of Sent, about 15 minutes from Scuol. He generously gave the birthday party guests a tour of his studio, sharing his current and future works and projects, which span the globe, as he also has a studio in China.

Just the outside of the village, Vital developed a private sculpture garden, and part two of the birthday was a picnic.

It was one of those pitch perfect summer days, sunny, warm, not too hot/not too humid. As lunch was being setup, guests were invited to walk through and explore all the wonders of the park including Vital’s eccentric sculptures or swim in the fresh water pool.

Along the first dirt path was a floating metal staircase, followed by a footbridge entirely covered in hair, and the most daring and intriguing sculpture was another footbridge made of metal poles where the footholds were metal donkey heads. Watching some people attempting to cross the bridge with much fear and trepidation, I decided not to participate in the scary fun.

Lunch was set on two long buffet tables lined with grass and decorated with local condiments and produce. An assortment of salads and fresh vegetables were laid out and cooks grilled local made sausages and meats. We were given a plastic crate to put everything in and walked down to a tented covered area with picnic tables.

After lunch we drove to the nearby town of Ardez, where Vital has an art foundation in a converted house from 1641, which he bought in 2003. The foundation houses Vital’s private art collection and features works by Buckminster Fuller, Simon Rodia, Gordon Matta-Clark, Jasper Johns, Jean Michel Basquiat, Tintoretto, Louise Bourgeois, Florio Puenter, and Daniel Spoerri. The Rhaeto-Romanic library has 555 books from 1560-1850.

The real extravaganza of the birthday celebration was truly out of a Grimm’s Fairy Tale. Up a long, winding road on the top of the village of Tarasp, is the Tarasp Castle. Originally built as a fortress in the 11th century by the lords of Tarasp, it was enlarged in the 16th century to its present structure. Industrialist Dr. Karl August Lingner bought the rundown castle for 20,000 francs in 1900 and had it completely renovated. In 2008 the Hesse family gave the castle to the Tarasp township in exchange for maintaining it. When we arrived in the medieval courtyard, a local Oom-Pah style band played while we enjoyed cocktails and watching the sunset over the mountains. The highlight of the evening was a special organ concert on a masterpiece concert organ built in Dresden by Jemlich. Everyone was invited into a large, magnificent wood paneled room with an extravagant gilded gold Baroque mirror. While the organist was playing haunting, classic pieces, it suddenly started to thunderstorm with lightning bolts, and thoughts of Count Dracula arriving at any moment came to mind.