Top Posts
5 Reasons to Escape to Long Island this...
ESCAPE PLAN: Austin, Texas
Wilson Cruz and Other Celebrities Speak Out for...
Decorate Like A Designer With Jonathan Adler
Future Perfect Project Giving Free Concert at Lincoln...
Pack Your Bags and Prepare to Celebrate Pride...
Visit Lauderdale Launches New Campaign to Show the...
Tom Prior: The Star of the Gay Biopic...
8 Awesome Things to Do in Canada’s Banff...
Earth Day: 5 Countries Going Green and How...
Home Destination Europe Rediscovering Florence, Italy 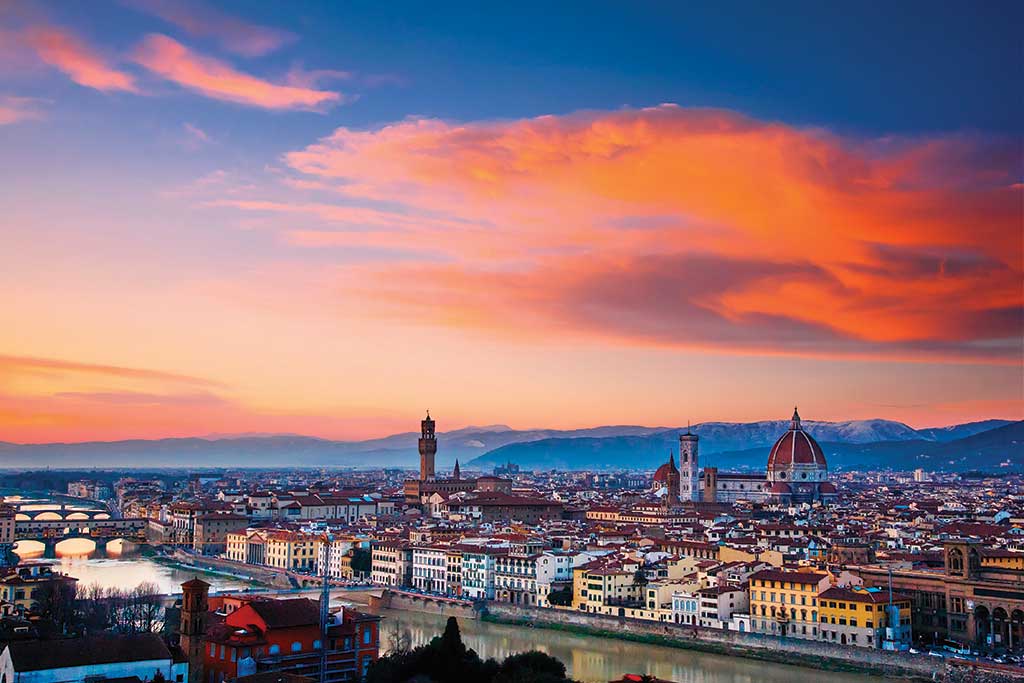 In Piazza Signoria, you’ll also find the Uffizi Gallery. It’s worth the trip just to see Botticelli’s “The Birth of Venus” or Caravaggio’s “Medusa.” Reminder, with the Firenzecard you skip the hour-long lines to enter this very popular museum.

Also in this neighborhood is the Palazzo Pitti. On the outside it’s not the prettiest palace in the kingdom, but inside it’s quite astounding. Like the Uffizi, this museum is gargantuan so choose the rooms you decide to view wisely. Among the former living quarters of the Medici family is a treasure house of priceless paintings, jewelry, furniture, and statues.

There’s also an amazing costume gallery within the Palace. Established in 1983, it’s the only National Museum of Italy exclusively dedicated to the history of fashion. It houses not only garments worn by the Medici’s back in the 16th century, but it travels all the way up to the present. Very extensive!

Behind the Palace are the Boboli Gardens, and if you climb to the very top there is a breathtaking view overlooking the Palace and the city center beyond. Strolling through the gardens can be a well-needed escape from the hoards of tourists. 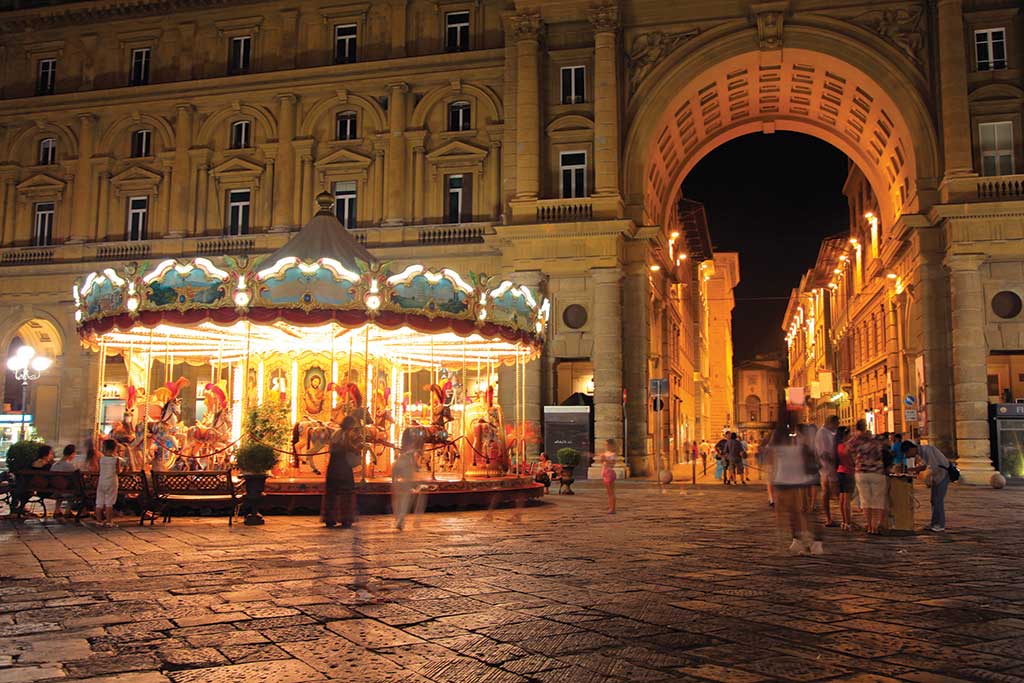 Merry-Go-Round in the Piazza della Repubblica

One afternoon, exhausted from walking all over the city, and in and out of museums, we passed by Il Ristoro and decided to check it out. Light and airy, we were walked to the back of the restaurant, which has the most amazing view of the Arno, the city center on the opposite side of the river, and depending on your seat, even a view of the Ponte Vecchio. This small restaurant has ridiculously inexpensive and delicious food with super-friendly servers. We came back several times, whether for a coffee pick-me-up or a glass of wine. Ironically, just a few doors farther down the street are crazy expensive restaurants boasting the same view that you can get at Il Ristoro for a quarter of the price.

If you’re a foodie like me, you will love Florence. Some of my favorite restaurants are also here in the Oltrarno. Often before a big trip, I’ll do tons of research, which includes restaurants I want to check out. Ultimately, once I reach my destination, I tend to throw the list away and dine whenever a place pulls me in. It might be the décor, the location, or the menu.

That is how we stumbled upon Osteria dell’ Enoctica. It’s a restaurant I loved so much that on this trip I made reservations online for a second evening. It was a bit chilly and windy that night, and when we arrived they informed us that they were completely booked. (I had neglected to check my e-mails, and there it was, their response in my mailbox.) As we turned to leave the host shouted, “But wait! You’re here, we must fit you in.” He studied his laptop and after a short period of time he alerted us that a cancellation had just come in and before we knew it, we were whisked to our favorite part of the restaurant. Once seated, the sommelier, greeted us with, “Welcome back!” He remembered us? “You were here two nights ago and sat across the way at that other table.” He even remembered what wine we were drinking, and offered to bring us a bottle. In amazement, Bud and I looked at each other and laughed. (Again, I thought to myself, what is it about Florence that is so different now?). I highly recommend their chicken liver terrine as an appetizer. As an entrée try their grilled skirt steak from a special Tuscan breed of cow served with bell peppers in thyme, or their tender and succulent braised wild boar with olives. A delightful plus: their menu and wine list are moderately priced. 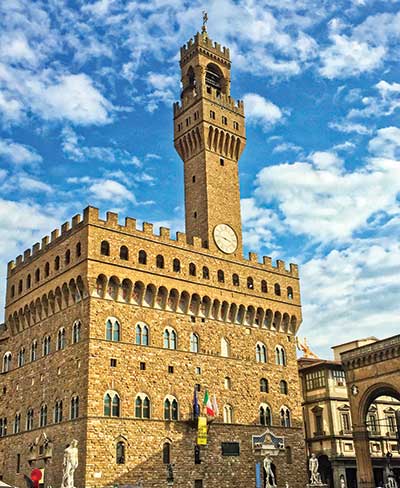 Not too far away is the Piazza Santo Spirito named after the Basilica di Santo Spirito. It’s a charming and beautiful plaza with an octagonal shaped fountain anchoring the center of it. Populated by restaurants, bars, and artist shops; street musicians often entertain throughout the piazza. On weekdays, Santo Spirito hosts a flea market and on the third Sunday of every month it turns into an organic farmers’ market. My favorite restaurant in Santo Spirito is Trattoria Borgo Antico.

I prefer eating outside. Even if it’s winter, there are plenty of heaters. At Borgo Antico be sure to try their selection of country homemade salami with crostini and pickled veggies. For an entrée consider their beef stew with red wine, which is to die for. Regulars rave about their gnocchi, risottos; and pizza. It’s relaxed, casual and everyone is friendly.

Right next to the restaurant is a very popular bar, often full of locals called Volume. It’s a former millenary shop with relics of its past incarnation creating almost a museum affect. They offer coffee and pastries in the morning and at night, drinks, bar snacks, plus a buffet and crêpés. A DJ or a local band plays music on the weekends hence it’s very popular and crowded after 8 P .M.

If you’re thirsty for some gay nightlife there’s Piccolo in the Santa Croce neighborhood. It’s a quiet place, perfect for smart cocktails and catching up with a friend…or making a new one.

The highlight of all my experiences in Florence was a day trip out of the city to take part in a cooking class. LovexFood was created by a witty and super-creative gay couple, Luca and Lorenzo, who live just 15 minutes outside of the city in the Chianti Hills.

The class was going to focus on making pasta. I had wrestled with preparing homemade pasta years ago, and in a flour-induced panic I gave up midstream and dashed out to the store to buy packaged pasta. I never tried again, until this day trip. 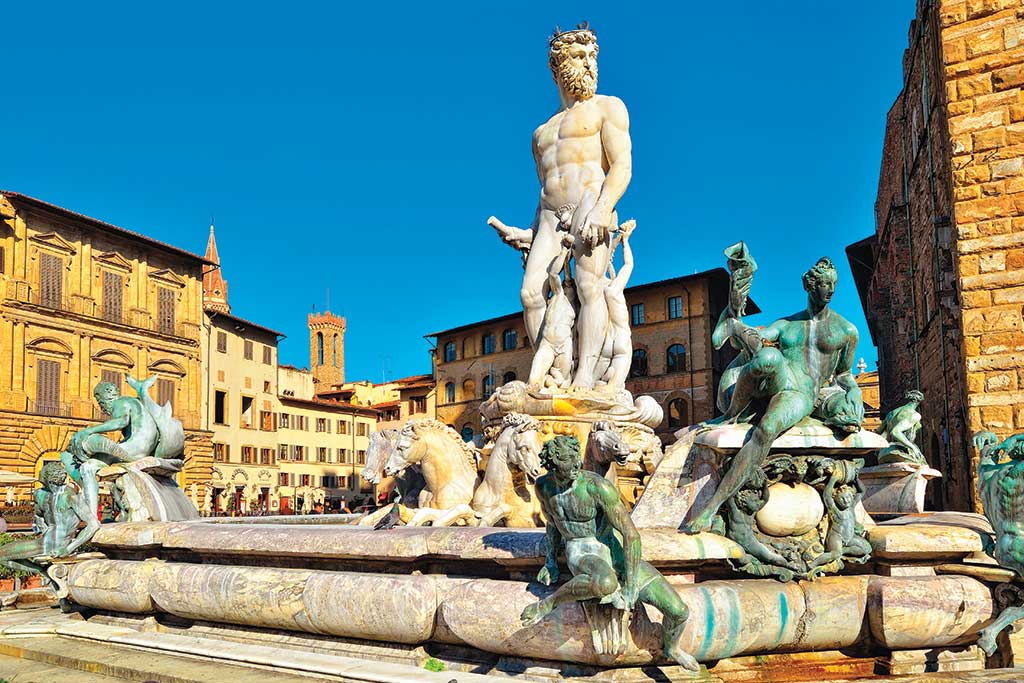 The Fountain of Neptune

LovexFood is more than a cooking class, it’s an opportunity to witness two Italian men share their passion for cooking and their love of life. Both Luca and Lorenzo learned how to cook from their grandmothers. With classes of up to eight people, we were in a group of just four, which really gave us a chance to share and experience a lot. The recipes and tips are simple but sublime. While explaining very clearly what they were creating, we all shared stories of our lives, careers, where we were from, and our cooking habits. Luca and Lorenzo’s passion and love for what they do clearly is felt in the dishes that have been handed down from family members, generation to generation.

Luca met us at the Santa Maria Novella train station in Florence, and we traveled off to Lastra a Signa. Even though we had a drizzly day, their lovingly restored farmhouse was warm and inviting. With a roaring fire burning in the fireplace, we were offered morning coffee and a spread of tasty treats. This class is a total hands-on experience that even novices can handle.

The men grew up in families in which cooking is the best way to show the love you have for someone, and they’ve always enjoyed sharing their passion for cooking with family and friends, hence the creation of LovexFood. Discovering that they both worked in fashion for several years, I asked them how they met.

“We meet at a fashion party during the Florentine Fashion week in January 2008. We fell in love and we started sharing our lives together.”

Luca and Lorenzo have a cookbook in the works and have just recently purchased the property next to theirs. In the future, they hope to open up a bed and breakfast.

The pasta we made in our class that day were ravioli with pumpkin filling, and potato gnocchi. Lorenzo also demonstrated how to make farfalle, tortellini, rigatoni, and fettuccine. We made two different sauces that were so easy and simple, even “non-cooks” would be able to master these mouthwatering recipes. One was an olive oil, butter, and fresh sage sauce, and the other was a speck, brandy, chopped arugula, and cream. 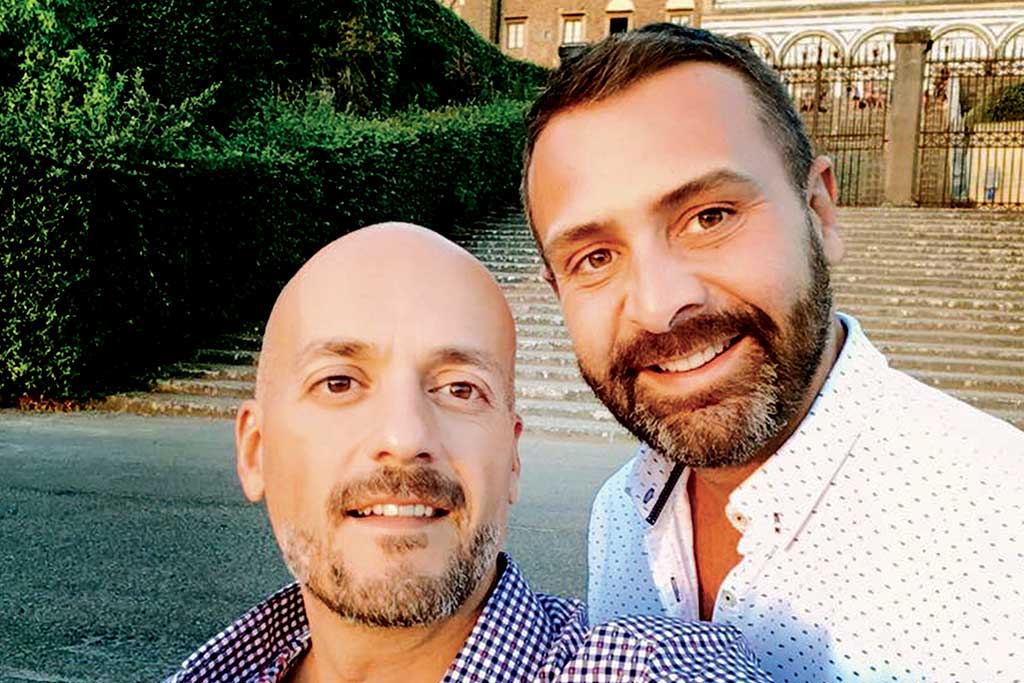 When all the food was ready, we sat down to enjoy our dishes at a beautiful and tastefully set dining room table and local Chianti wines were served at the meal.

We shared olives from their very own olive trees, the herbs used in their dishes are all from their garden, and the eggs we used for cooking came from their own chickens! Can it get any fresher than that? Plus dessert…a light and not too sweet, tiramisu that we all helped to make. The 6.5 hours flew by. Honestly, I didn’t want to leave. When Luca and Lorenzo open up their bed and breakfast, I’ll be one of the first to book a reservation.

After enjoying the cooking class, my fears, frustrations, and failure in making homemade pasta happily disappeared. Their knowledge, simple explanations, and patience fueled me to run back to New York City and recreate their traditional family recipes. Upon leaving, I asked what they hoped people would take away from their classes.

“We would like that people understand that ours is an unconventional cooking class. We share with people what our families shared with us…spending some hours cooking with people as we are friends. Usually we shake hands when we first meet you at the train station, then we say goodbye with an Italian strong hug!” And that they did.

It was during the quick train ride back to Florence, when all of a sudden, it dawned on me what had changed since my very first trip here so long ago. The city seemed easier, the Florentines more friendly. It now felt as though the city had opened up its arms and embraced me. Or maybe…it wasn’t Florence at all. Maybe it was because I was older, more patient, and more self-confident. Maybe I was…friendlier. In fact, it wasn’t the city that had changed, it was me.