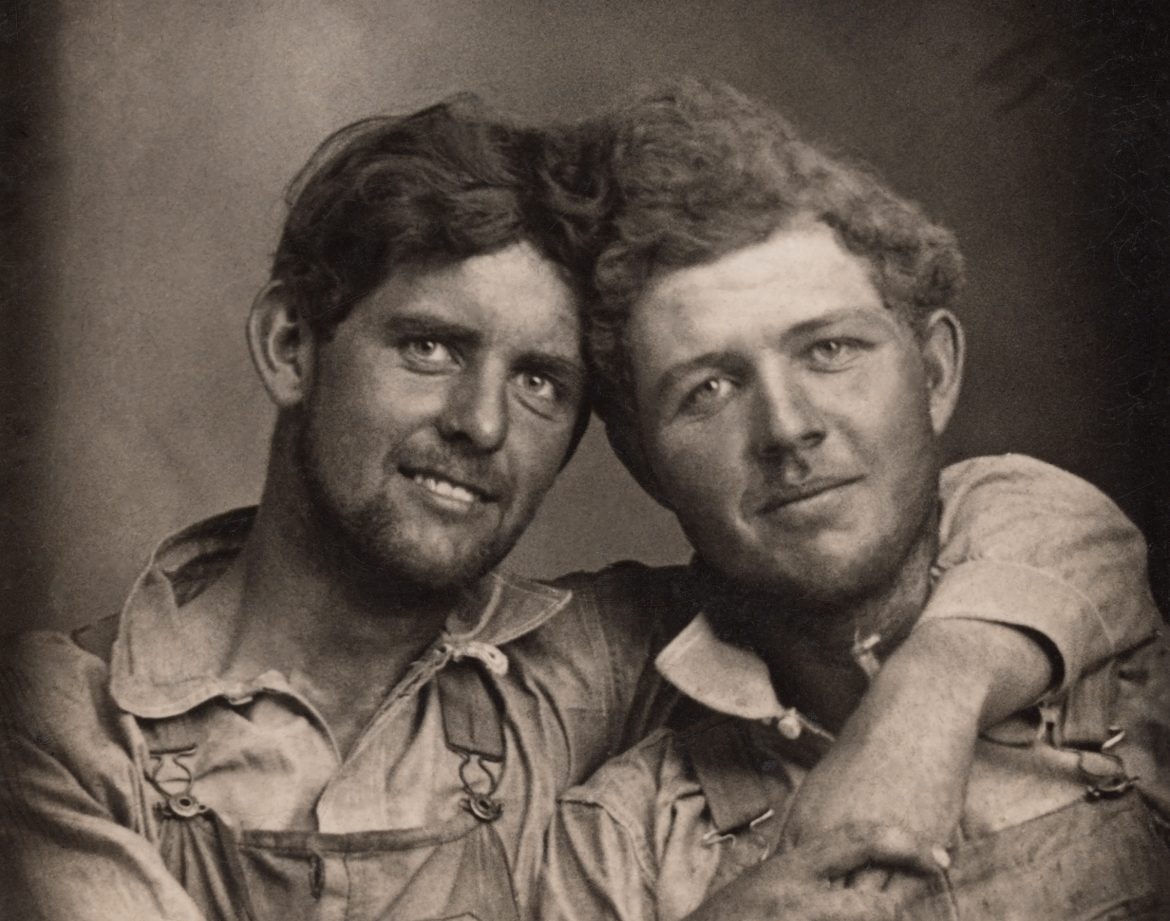 LOVING is a book filled with historical photographs of men in love that spans 100 years, from the 1850s to the 1950s

Image from LOVING: A Photographic History of Men in Love

A new book titled, LOVING: A Photographic History of Men in Love, 1850s-1950s was released a few months back, and has since become a high-profile artifact of gay love throughout the years. The large, gorgeous coffee table book is filled with over 300 images taken from around the world. It’s a stunning and visceral reminder that men have been in love with each other throughout the course of history, and that no law or regulation can dictate true love.

The story of how the book came to be is almost as miraculous as the fact that these photos have survived for so many years. Hugh Nini and Neal Treadwell stumbled upon their first photo of men in love at a Dallas antique shop. From there, the collection began. I spoke with Hugh and Neal to learn more about this fascinating book, and the story behind it.

First of all, we need to start from the beginning. Tell me how this book came to be. How did you find all these photos? 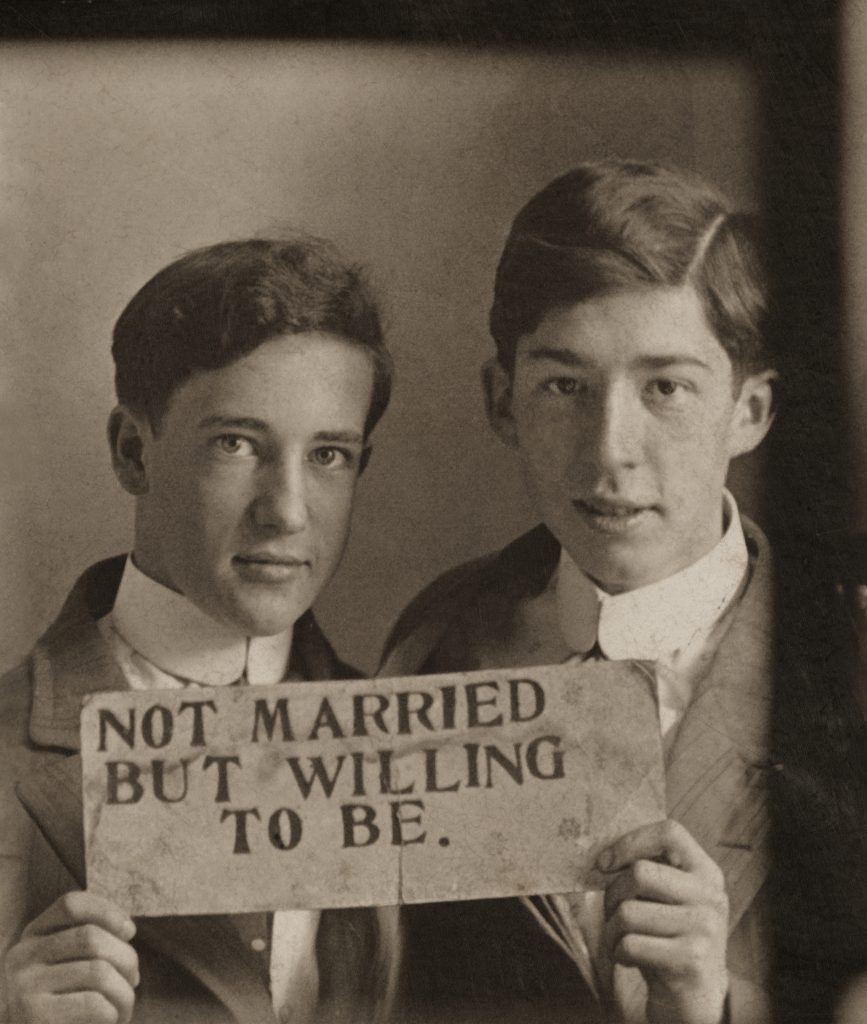 Image from LOVING A Photographic History of Men in Love

Neal: Well, we call this our “accidental collection.” It all started twenty years ago on our way home from church. We stopped by this little antique store, and we found this box of photos. One of the photos was of two men who looked like a couple. One was embracing the other from behind. And there was just something about them that reminded us of ourselves. You could tell just by looking at the picture that these two men were so obviously in love.

Hugh: We bought the photo and brought it home, but you know, it just kind of sat on my desk, lost in the pile of paperwork and stuff for six or seven months. From time to time we’d clean off the desk, see the photo, and be amazed that the picture had somehow survived something like 80 years…but then we’d go back to our lives and forget about the photo again.

Neal: Then about eight or nine months later, we came across another photo. It was on sale at an auction. It was two soldiers leaning their heads on each other, and it was in a glass frame that had “Always Yours” etched into it. So, that was our second one, but you know what’s weird? We have over 3,000 photos now, and it wasn’t until we collected around 500 images that we actually realized we were building a collection.

Hugh: Yeah, what Neal is trying to say is that we were both super busy people! (laughs) I call this our “sleepwalking” phase of collecting, where we were subconsciously doing it without even really knowing we were doing it. But we kept doing it because there was something so special about these photos. We were amazed that these photos had been taken in the first place, plus, some were a hundred years old! It just seemed like a miracle that these images even existed, so we felt compelled to try and preserve them for another 100 years. 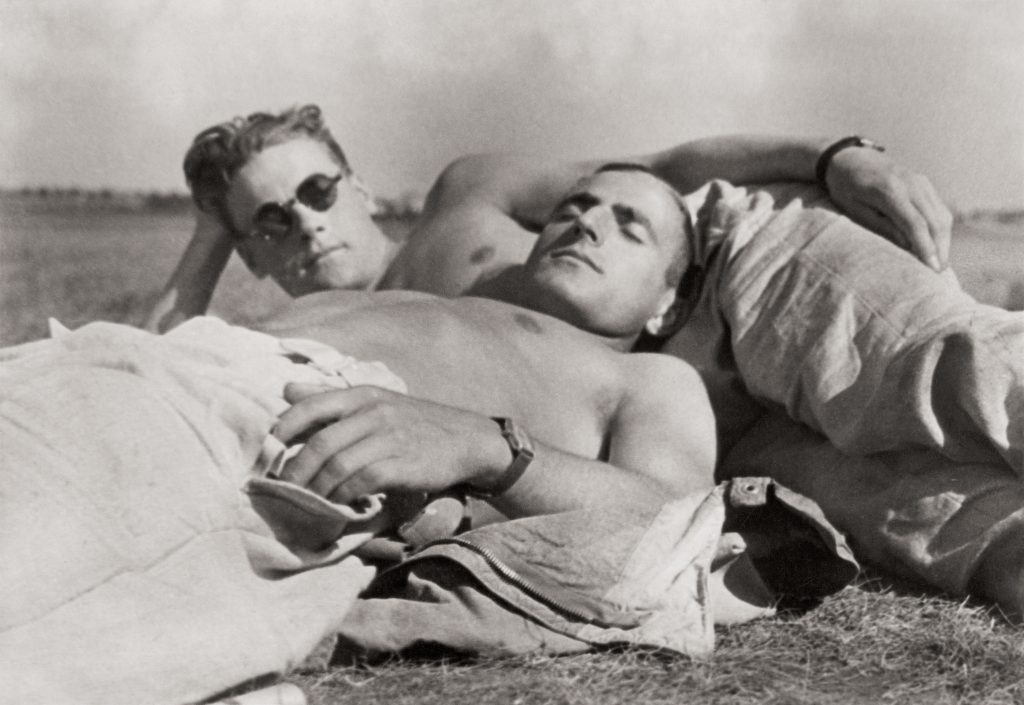 There must have been a moment of realization where you finally discovered that you had more than just some heartwarming photos…you in fact had an important historical collection of images nobody had ever seen before.

Hugh: Funny enough, that moment came when we met with one of the guys we had bought a few photos from. We had been communicating online and we found this picture we absolutely loved, so we told him we’d buy it. But we said that we didn’t live in Texas anymore and had moved to New York City. After getting our new address, he paused…then he said that he lives two blocks away! So, he invited us over to pick up the photo, and he wanted to see some of our collection. The second he saw our photo albums, he just said, “You need to publish these!”  It was the first time we had heard that…but then we kept hearing it over and over.

Neal: Yeah, a few years later we had a friend from work come over, and we had some of the photos sitting out on our coffee table. She asked to see more, and as she started looking through the albums, tears started rolling down her cheeks, and she said, “You really need to publish these!”

Hugh: We had always loved the photos and saw the meaning and power in them. We just figured nobody else would. It wasn’t until people started giving us feedback that we realized we had somehow created a really powerful collection. 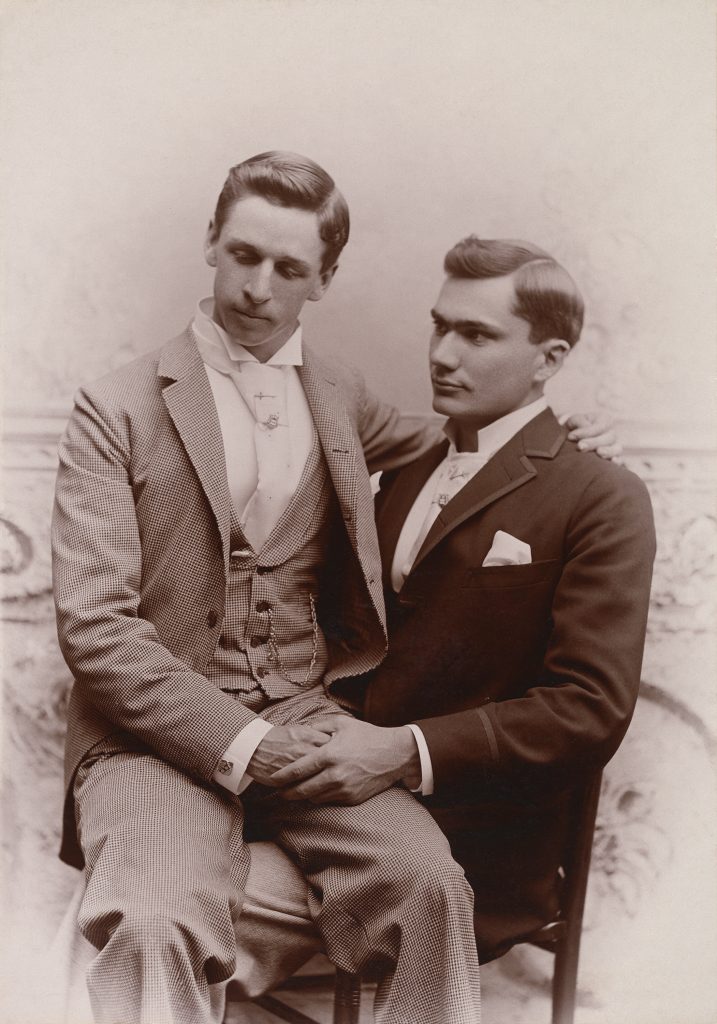 In the few months since the book was released, have you learned anything about these photos? Has anyone come forward and been like, “I know who that is!” or “Oh, that’s my great-grandpa”?

Neal: We have gotten some messages. We actually had a professor contact us about one of our pictures and said that one of the men is the poet Rupert Brooke, and the other is the artist Duncan Grant. After Googling them, I can say that the images totally match. So, if it isn’t them, it’s their doppelgangers!

Hugh: There’s also a photo of two soldiers that we have firsthand knowledge of thanks to one of their family members. Shortly after the photo of them was taken, one of the soldiers was diagnosed with muscular dystrophy after serving during WWII. He kept a shoebox with all of these photos and a ring that he had exchanged with his partner. He was only out to one person, his nephew. Shortly before his death, he gave the shoebox to his nephew and told him to keep the contents safe. 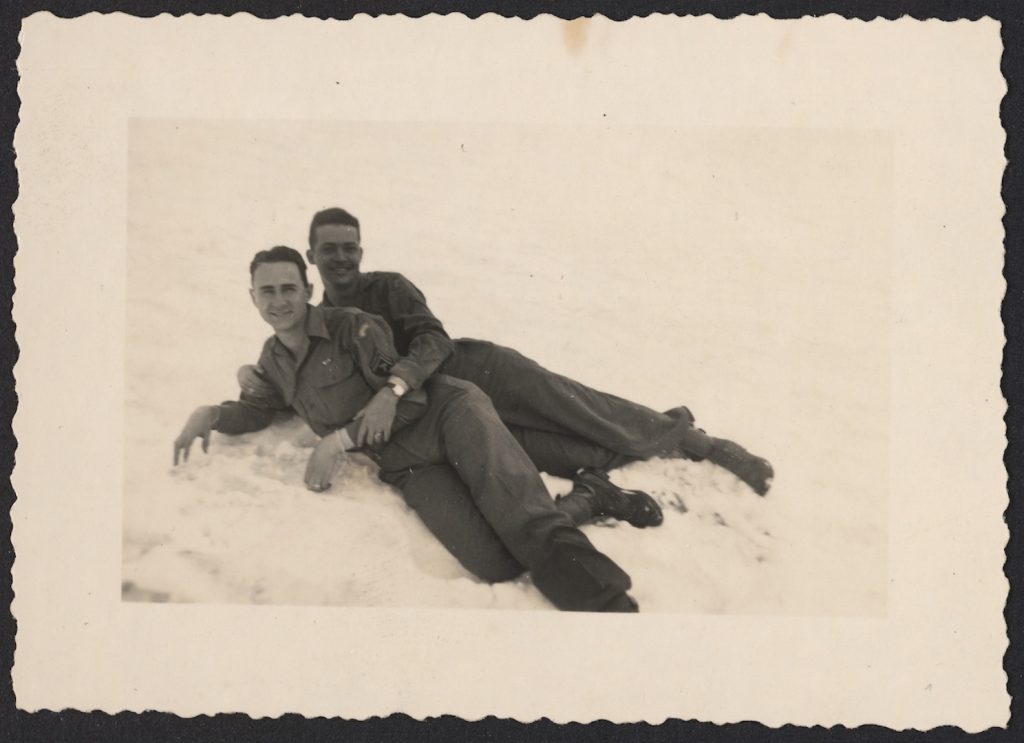 Two soldiers from LOVING A Photographic History of Men in Love

The soldier and his boyfriend were part of the 42nd Infantry, known as the Rainbow Division. In 1945, they came across the Dachau concentration camp and liberated it. A week after Dachau’s liberation, Hitler committed suicide and Germany surrendered. Shortly after that, the photo of them in the Austrian mountains was taken. They’re both wearing rings that they had exchanged. The soldier’s nephew now wears that ring to this day.

Neal: The photo in the book was just one of about 150 pictures from the shoebox his uncle left him. It’s such a remarkable story.

Hugh: Yeah, we received four or five of the photos from him, but the one featured in the book is just so powerful and beautiful.

Do you think you’ll have more people coming forward with stories and information? Are you planning on releasing another book of more pictures? 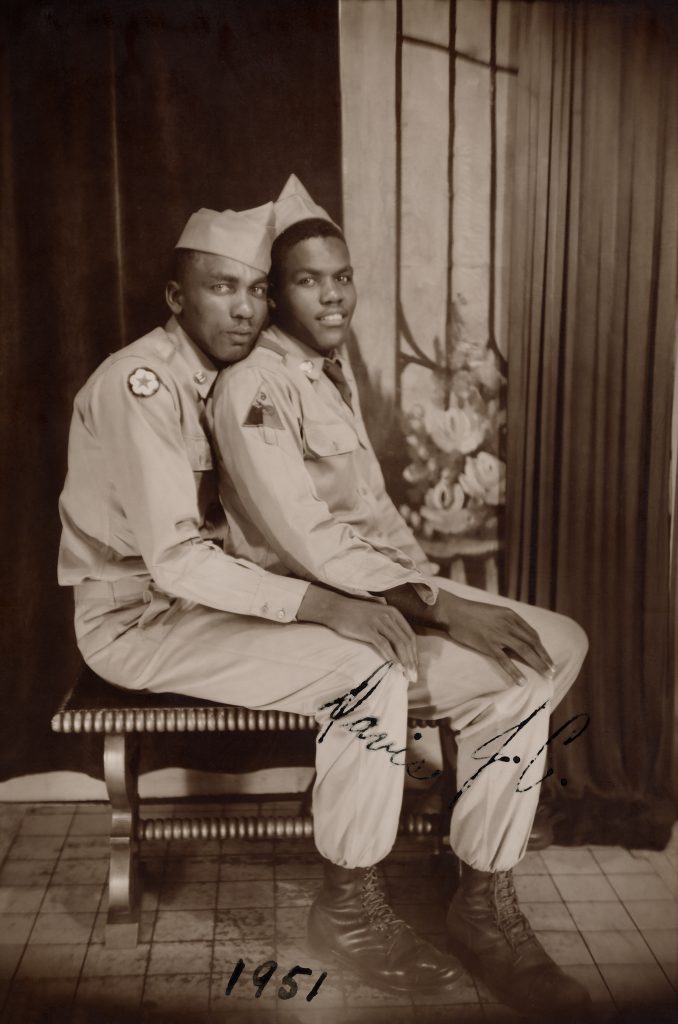 Neal: Oh, yes. I think the more books we can get in people’s hands, the more stories we can start hearing from readers. I’d love to release another book from the collection too. We have many military photos, so it could even be interesting to release a military-focused edition.

Hugh: One thing I also want to add is that, obviously, with us not having the stories behind many of the photos, we can’t define anyone’s sexuality. This book isn’t to say who is gay or not. We’re simply saying that these men are in love, and any other interpretation is left for the reader to decide.

To purchase your copy of LOVING: A Photographic History of Men in Love, 1850s-1950s, you can visit the publisher’s site, B&N, or your favorite bookseller.

Exploring Love and The World

Healthy Winter Recipes Made With Cauliflower