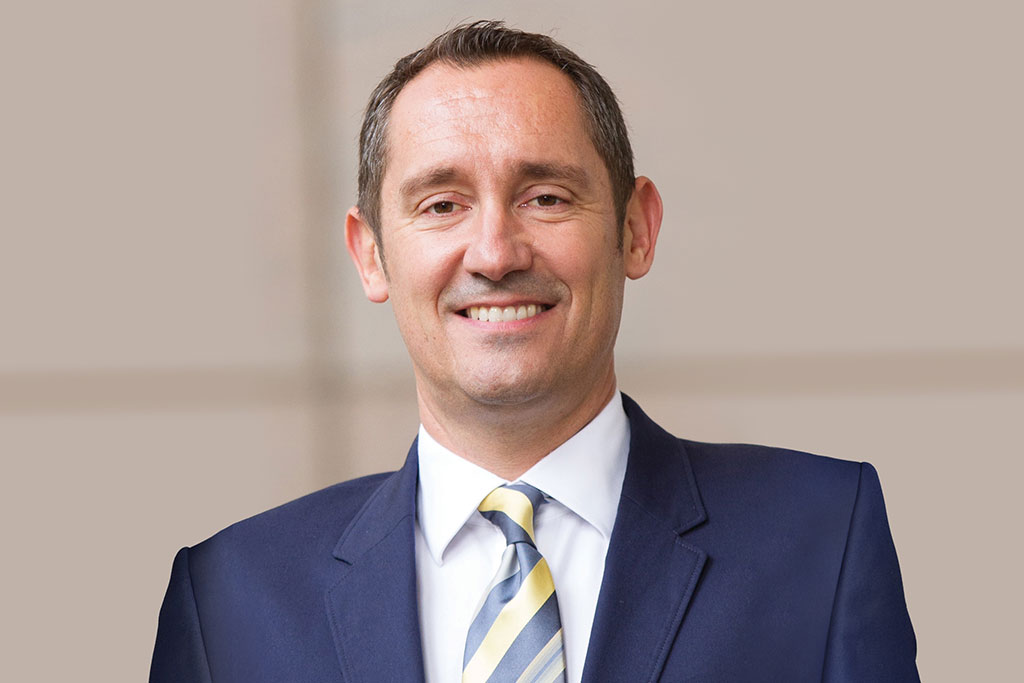 Timing is everything, and Lake’s foray into LGBT marketing came after years of honing his skills in various industries.

You have to take a step back to see what diversity really looks like,” says John Lake, the vice president and LGBT segment manager on the Wells Fargo Enterprise (national) Marketing Diverse Segments team. It’s a long job title, but one born out of Wells Fargo’s historical commitment to supporting a broad range of diverse populations, way before it was trendy or part of complex marketing strategies.

“We’re addressing the financial needs of diverse customers, and that’s the foundation that everything comes from,” continues Lake. “I’m part of a team that looks at different segments across the country and strategically identifies how we show up for those customers.” Wells Fargo continually strives to gain a better understanding of the financial needs of different segments, including millennials, people with disabilities, and veterans. But for Lake, a connection to the LGBT community has been in his professional DNA from the onset.

Timing is everything, and Lake’s foray into LGBT marketing came after years of honing his skills in various industries. Raised in Southern California, Lake studied advertising in college with the intent of working for big agencies and even bigger clients. Ironically, one of his first jobs out of school was with a small agency that specialized in toys and children’s products. Although the annual trips to New York City were a perk, San Francisco beckoned and the opportunity to work for DDB, the global marketing and communications firm, seemed like a dream. The dot-com bubble eventually burst, but the resilient Lake was ideally positioned to step into the food and beverage industry, working for The Isosceles Group as vice president of client services, specializing in building brands within the LGBT community, including Beaulieu Vineyard (BV), the longest continually operating winery in Napa Valley.

It was the late 90s and Lake says, “We were trying to replicate some of the success of Absolut and other wine/spirits brands. Before you could advertise, you had to get your own house in order. Now it’s often a given, but back then they were big steps that companies had to take.” The Swedish vodka brand had been in the gay marketplace since 1981, advertising in The Advocate and After Dark, but to Lake’s point, after the initial wow factor of being courted by mainstream brands faded, the LGBT community wanted to ensure that corporate policy stood behind the enticing ads.

“It was a really interesting time to be doing the work,” says Lake. “Not only was it about figuring out how to get brands out there to the community, but also making tangible connections with organizations like the Human Rights Campaign (HRC). Subaru and Absolut were out there, but the field was pretty open and it was possible to really make a mark through sponsorships and advertising.”

Lake leveraged his experience and accepted a position with HRC as the corporate development director, a position he held for eight years as he helped define the bench- marks for corporate participation in the LGBT marketplace. “At that point, companies needed to look inward before demonstrating outward support for the community, and it became a real passion of mine,” Lake recollects, “including supporting HRC from an authentic space, domestic partnership benefits, healthcare for transgender employees, etc.”

“There were often times when a company didn’t have the right infrastructure in place to even look at marketing components,” says Lake. “We were there to tailor programs and help set objectives. Companies have come a long way. Scoring 100 percent on HRC’s Corporate Equality Index is now the starting point. That’s where you take off from.”

HRC describes the Corporate Equality Index (CEI) as the “national benchmarking tool on corporate policies and practices pertinent to lesbian, gay, bisexual, and transgender employees.” The nonprofit has produced 14 editions, and through the years the evaluation has become more expansive and rigorous, with the latest criteria including global codes of conduct, non-discrimination policies, and new philanthropic guidelines and supplier standards.

Wells Fargo recently received its 13th-consecutive perfect score on the CEI, reflecting its longstanding commitment to the LGBT community. Back in 1987, the company was a forerunner by adding sexual orientation to its non- discrimination policy. In today’s world, trans- gender inclusion and gender identity are hot topics, both in the media as well as corporate responsibility. These protections require that a company’s US contractors abide by such policies and also prohibit philanthropic giving to non-religious organizations that have a written policy of discrimination on the basis of sexual orientation and gender identity. And while the tides are shifting, there is still plenty of ground to cover. The report reveals that only 63 per- cent of Fortune 500 CEI participants offer transgender-inclusive benefits.

Wells Fargo Chairman, President, and CEO John Stumpf views these initiatives as not only good for the soul, but also good for business. “We view diversity and inclusion as a path to innovation for our company. We are working to build a diverse and inclusive organization with the ability to see the world from multiple perspectives,” he has stated. “This will help us advance our business model and strategies, see and capitalize on new business opportunities, and will determine our long-term success in the global marketplace.”

Putting that ideology into action, Wells Fargo created the Accredited Domestic Partnership Advisor program in partner- ship with the College for Financial Planning, in 2010 the first-of-its-kind designation for financial professionals. “There were a lot of workarounds to imitate the financial benefits and protections of a legal marriage,” Lake says of the time when the program first launched. There is still a great need for LGBT-specific personal financial advisement. “In so many parts of the country, [gay] marriage is new, and with that comes new decisions and challenges. It’s important to have some kind of guidance: an accountant, attorney, or financial advisor that can discuss the tax impact.”

Often times, gay and lesbian couples who have been together long-term and amassed their own savings and investments, must navigate the financial implications when they decide to get married. And now raising children is at the forefront for many couples. According to the adoption advocacy site Lifelong Adoptions, approximately 65,000 adopted children are living with a gay or lesbian parent, while an estimated two million LGBT people are interested in adopting. All of these factors contribute to an ever-growing need for financial guidance.

Wells Fargo has also been a key supporter of LGBT businesses. In 2004, it became the first financial institution to join the National Gay and Lesbian Chamber of Commerce (NGLCC), an organization created to better address the financial and educational needs of LGBT businesses.

“Wells Fargo has been with us from the beginning and their commitment to helping the LGBT business community is underscored by their generous annual grants and programs that foster the development, growth, and sustainability of certified LGBT businesses enterprises,” says Justin Nelson, co-founder and president of the National Gay & Lesbian Chamber of Commerce (NGLCC). “At the heart of Wells Fargo’s LGBT initiatives is John Lake; his advice and guidance is immeasurable. We are so fortunate to have John leading Wells Fargo’s commitment to supporting diverse chambers of commerce and LGBT small businesses nationwide.”

Beyond his strategic work on behalf of individuals and small business, Lake’s most dynamic role has been his ability to align Wells Fargo with the country’s leading LGBT non- profit organizations to create an impact on a national as well as local level. Wells Fargo has a presence at more than 50 Pride festivals across the country, and while major cities like New York and San Francisco might be expect- ed, it’s equally important to show solidarity in smaller markets.

“By showing up everywhere we do business, it shows Wells Fargo’s dedication to inclusion. Especially in the smaller communities, like Sioux Falls or Winston-Salem, being visible can help create positive change toward acceptance for the LGBT community,” says John Stotler, president of PRIDE Team Member Network. “Our team members can feel strong and empowered at those events and share the strength of Wells Fargo’s inclusivity with the community.

Lake says another touch point has been to address bullying of LGBT youths. Though Wells Fargo had been a longtime supporter of the Gay, Lesbian & Straight Education Network (GLSEN), a more specific initiative was needed to help support the 74 percent of LGBT students who reported being verbally harassed in the past year according to GLSEN’s most recent National School Climate Survey. Working together, they did what many thought would be impossible and placed a Safe Space Kit (including Safe Space stickers, posters, and GLSEN’s Guide to Being an Ally to LGBT Students) in every middle school and high school across the US.

“John is an invaluable liaison between the non-profit and corporate worlds, having worked in both. The Wells Fargo partnership has been hugely important to GLSEN’s work over the past six years, helping us reach every single middle and high school in the country with a GLSEN Safe Space Kit and supporting the on-going research into LGBT student experience that anchors our efforts, among other projects,” says GLSEN’s Executive Director Dr. Eliza Byard. “A relationship of this scale requires good lines of communication and reporting. John has taken on the stewardship of the relationship since join- ing Wells Fargo, and having someone in that role who is committed to social impact and who understands personally how nonprofits work has been a crucial component of the ongoing strength of the partnership.”

Lake credits the collaborative efforts of many for these program success stories, and the fact that their inspiration comes from a place of compassion and truth. “It’s been important for me to make sure that the work is authentic. In the end, we’re selling products and services, but there are right and wrong ways to do that.”