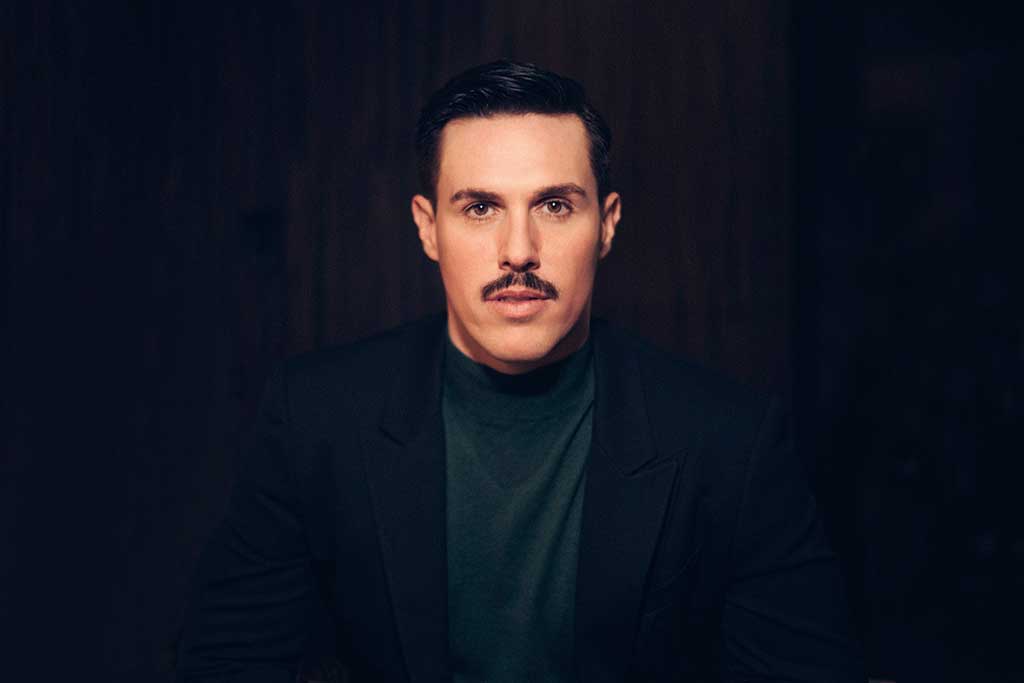 Openly gay from the get-go, Sparro went on to win GLAAD’s Outstanding Music Artist Award the following year, and in 2012 he scored a GQ Australia Man of the Year title.

With his high cheekbones and chiseled features, piercing brown eyes, and mustache, Sam Sparro (www.facebook.com/samsparroofficial) has sometimes been mistaken for a Freddie Mercury impersonator. However, the singer and songwriter has very much carved out his own identity through a catalog of catchy, danceable electropop, and an uncompromisingly queer persona.

Born Samuel Falson in Sydney, Australia, Sparro first splashed onto the music scene with the Grammy-nominated international 2008 hit, “Black and Gold,” and a self-titled debut album. Openly gay from the get-go, Sparro went on to win GLAAD’s Outstanding Music Artist Award the following year, and in 2012 he scored a GQ Australia Man of the Year title. His sophomore disc, 2012’s Return to Paradise, and several Quantum Physical EPs followed, while December 2017 saw him take a turn for the jazzy with a first Christmas minialbum, Christmas in Blue, which included his atmospheric, lounge-ready take on WHAM’s “Last Christmas.”

Sparro, in fact, revered the late George Michael and, in wake of the singer’s untimely 2016 demise, he penned a Guardian op-ed that stressed the importance of not sweeping aside or sanitizing Michael’s sexuality and the role it played in his life. Sparro also performed at the Sydney Orchestra’s 2017 George Michael tribute concert, Praying For Time.

Recently, the Los Angeles–based Sparro has made appearances at LGBT events, including a benefit for the Transgender Legal Defense and Education Fund and Honey Dijon’s NYC record release (he appears on her track, “Look Ahead”). Engaged to be married (his fiancée prefers to be out of the public eye), Sparro took time out to join us in the VIP Lounge.

Congratulations on getting engaged! Where are you thinking of going for your honeymoon?
Somewhere really tropical and isolated, maybe Fiji. I want to be in one of those huts that are on the water.

With manta rays swimming around for company, I assume?
Yeah, manta rays, and I would live there forever if I could.

Adele covered “Black and Gold,” and you guys also hang out socially. Knowing that she is a bit of a prankster, has she ever told you a really saucy joke or pranked you? Can you share one?
Yes. Honestly, they’re really inappropriate jokes, so probably not [a good idea to tell you any]. I wouldn’t do that to her, but I will say she is very prankish and her and Lily Allen used to prank call me. They had one ongoing gag for a while where they pretended to be a 12-year-old boy that was a fan and somehow got my phone number. That was pretty funny. I didn’t know it was them until I read about it in The Sun. Lily was talking about it in the paper, and I was like, oh my god, that was them!

Who is your dream duet partner?
I love Beth Ditto. I think she’s soulful and amazing. That would be really fun. I actually have some really exciting collaborations this year that I’m been working on. One with Jake Shears, that’s really cool. Another with Rahsaan Patterson, who’s one of my favorite singers ever, and another with King, an amazing R&B trio from LA.

Who else do you recommend we listen to?
I really love the new Grizzly Bear album, it’s really beautiful.

Will the Praying for Time George Michael tribute concert become available as an album or video? And how was that experience?
A great question. I know they filmed and recorded it, which they may show on Australian TV . He’s not an easy artist to cover, because he has such a huge vocal range, which I learned from doing the show. But I would encourage listeners and music fans in general to dive a bit further into his catalog. A lot of people just know the WHAM! stuff or ‘Freedom! ’90,’ but his work is really amazing. Listen to the album Older, because it was before he came out of the closet, and it’s about him losing a partner to AIDS. When you listen to the album with that knowledge it’s really incredibly vulnerable and beautiful.

You’re an Aussie but have lived in the USA and UK. What does Oz have over the USA?
Universal healthcare. Really good food. Beautiful beaches. But LA is my home now, and I’ve been here for so long. This is where I feel [at home].

You’re friends with and you have collaborated with Adam Lambert. Tell us about his house and is there anything you would totally love to steal from there?
His house is beautiful and he has really great, giant amethyst crystals that I would love. And he has really great floor-to-ceiling curtains that I want. That’s the gayest thing ever, isn’t it? I want to have his floor-to-ceiling curtains.

The Freddie Mercury/Queen biopic Bohemian Rhapsody is slated for release later this year. Would you have liked to been offered the Freddie role?
I think if I’ve been offered the role today I would have to turn it down. In an age where there’s so little representation of South Asian men, it would be weird for a white guy to take on that role (NOTE: Mercury, born Farrokh Bulsara, was of Parsee heritage). I wouldn’t feel good about it and I would never hear the end of it from the Internet!