Top Posts
Compass Watch | Celeste
Get The Best Deals in Fort Lauderdale This...
America The Beautiful Pass
THE DOG RESCUERS
Coola Travel Suncare Kit
ESCAPE PLAN: Walt Disney World
Hot Type for Savvy Travelers — The Best...
What You Need to Know About Vacation Rentals
What’s New In Atlanta
Summer In The Sullivan Catskills
Home Gay Vancouver Vancouver: One of the First Down the Aisle with Marriage Equality 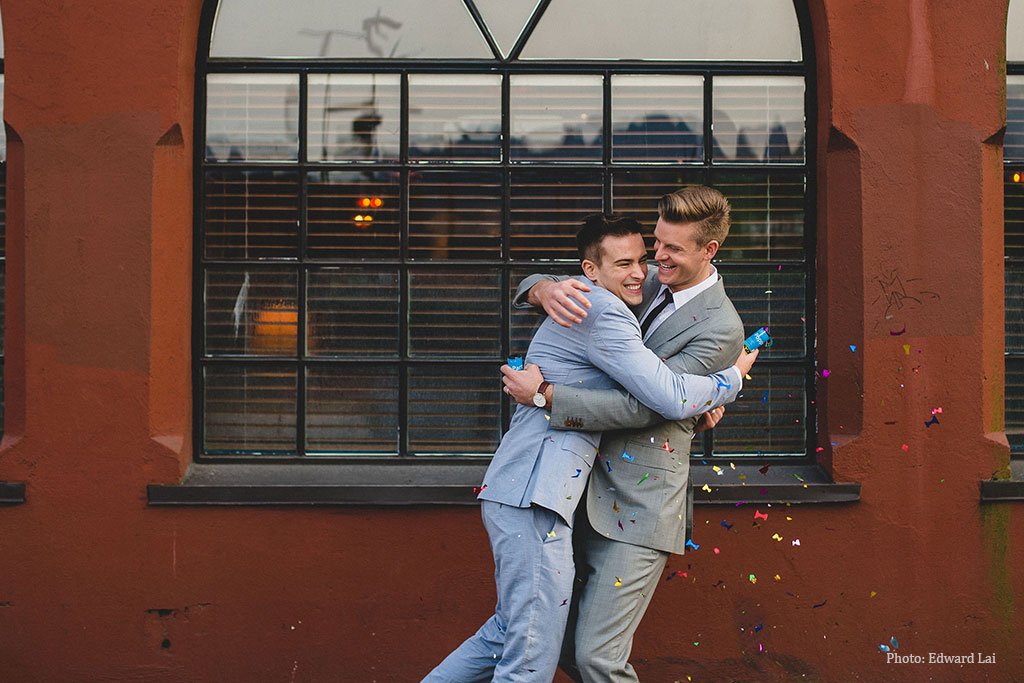 It's one of the most progressive, liveable and beautiful cities in the world, so it's no wonder so many LGBT+ travellers continue to flock to Vancouver.

More than a decade ago, Vancouver, British Columbia, home to the largest LGBT+ population in Western Canada, garnered sudden world-wide attention as the largest major city in one of the first jurisdictions in the world to legalize same-sex marriage.

On July 8, 2003, the province of British Columbia announced the legalization of same-sex marriage, and major media from around the globe focused on Vancouver to get firsthand accounts of the results of this landmark legislation. Immediately following the announcement, scores of couples from across Canada and around the world began planning their nuptials in Vancouver. An exuberant mix of fellow Canadian, American, international and activist same-sex couples, who could not yet legally marry at home, flocked to Vancouver to exchange vows.

A new-found wedding industry also suddenly exploded. Suppliers of traditional wedding fare scrambled to get in on the frenzy, offering hotel ballrooms, limousine services, wedding cakes, jewellers, tuxedo wedding gown rentals, and more. Creative endeavours soon offered everything wedding-related in rainbow, including male-male and female-female wedding cake toppers; delightfully cutting-edge at the time. Marriage commissioners began promoting their services, many offering unique ideas, such as getting married in a lush local park, on a sparkling luxury yacht, at the top of one of Vancouver’s stunning mountains, or on one of Vancouver’s wide array of fabulous beaches. 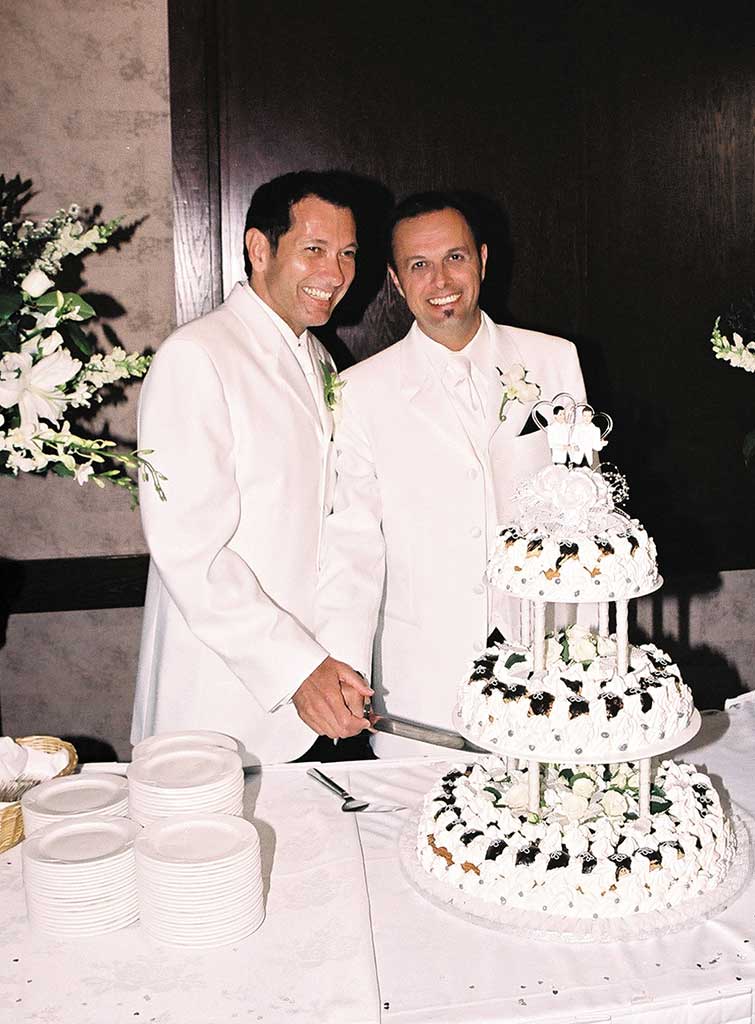 Lawrence and Royden were married in Vancouver in 2004

Wedding ceremonies ranged from small intimate affairs with just couples, a pair of witnesses and a marriage commissioner in a hotel room, to full-blown elegant extravaganzas, pulling out all the stops from start to finish. Not missing a beat, Tourism Vancouver, in cooperation with tourism partners, ran an extravagant “Win Your Wedding Sweepstakes” in 2006, open to residents of the United States. The complete wedding package included roundtrip airfare for two, as well roundtrip airfare for six other friends and family of their choice, a glamourous wedding ceremony for up to fifty people in Queen Elizabeth Park, a lavish wedding reception at Seasons in the Park, and upscale accommodations for everyone, followed by a luxury seven-day honeymoon Alaska Cruise. Grooms Greg Auseth and John Gabriel from Minneapolis, Minnesota, were the lucky winners, who tied the knot in style in front of family and friends, on September 22, 2006.

Since this innovative promotion, other destinations have followed suit with their own wedding contests and promotions.

Fast-forward to 2016 and much has changed in the world of marriage since 2003. Same-sex marriage was legalized nationwide in Canada in 2005 and the transgender community, the T in LGBT+, also became more visible when exchanging vows, as the definition of civil marriage was now the lawful union of two persons to the exclusion of all others. The United States legalized same-sex marriage nationwide in 2015, as have a number of other countries over the past decade.

This new-found social progress caused some to think that Vancouver would no longer benefit as a same-sex wedding destination, as so many could now get legally married at home. Although true to some extent, there are still a majority of countries where it is not legal and Vancouver has the political cachet of being one of the pioneers of progressive human rights. Vancouver also has warm memories for many who first legally married here, who are now looking to return to the city, as a second honeymoon destination. This was evident from comments made by many couples who visited the Tourism Vancouver booth during their “10 + Years of Marriage Equality” promotion at Pride events across the USA, in 2015.

Wedding trends have also evolved since 2003, with many couples now opting for smart designer suits rather than formal tuxedos, glamourous couture dresses instead of formal wedding gowns, small plates instead of buffets and donations to a charity of choice in lieu of gifts. Creative searches for venues now result in services at places such as the Dr. Sun Yat-Sen Classical Chinese Garden, Stanley Park Pavilion, Museum of Anthropology, Capilano Suspension Bridge, or at one of Vancouver’s amazing assortment of upscale eateries.

An extensive list of accolades in the media consistently showcase Vancouver as one of the most progressive, liveable and beautiful cities in the world. It’s no wonder so many LGBT+ travellers continue to choose Vancouver as their destination of choice, whether for leisure travel, a fabulous honeymoon, or as the setting for their Big Day! 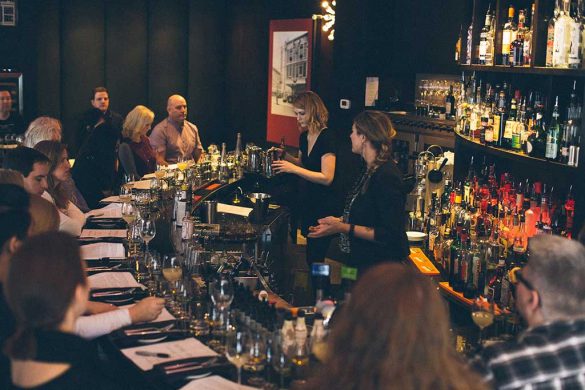 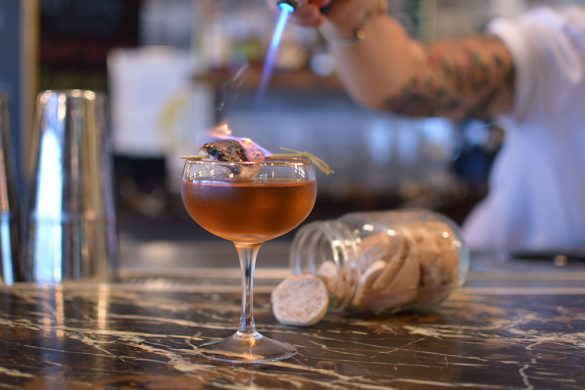 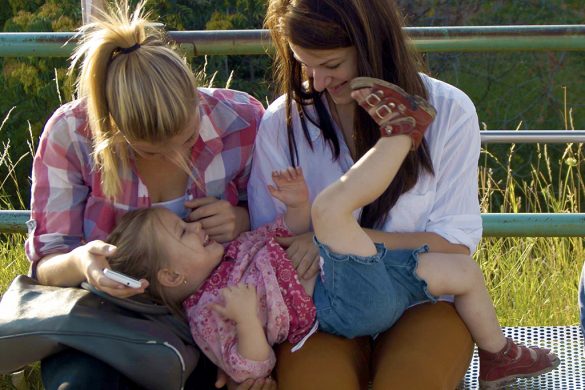 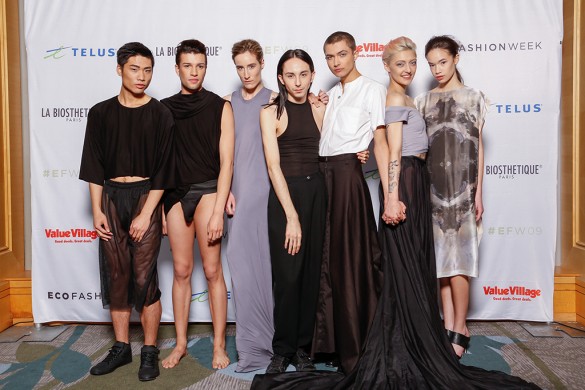