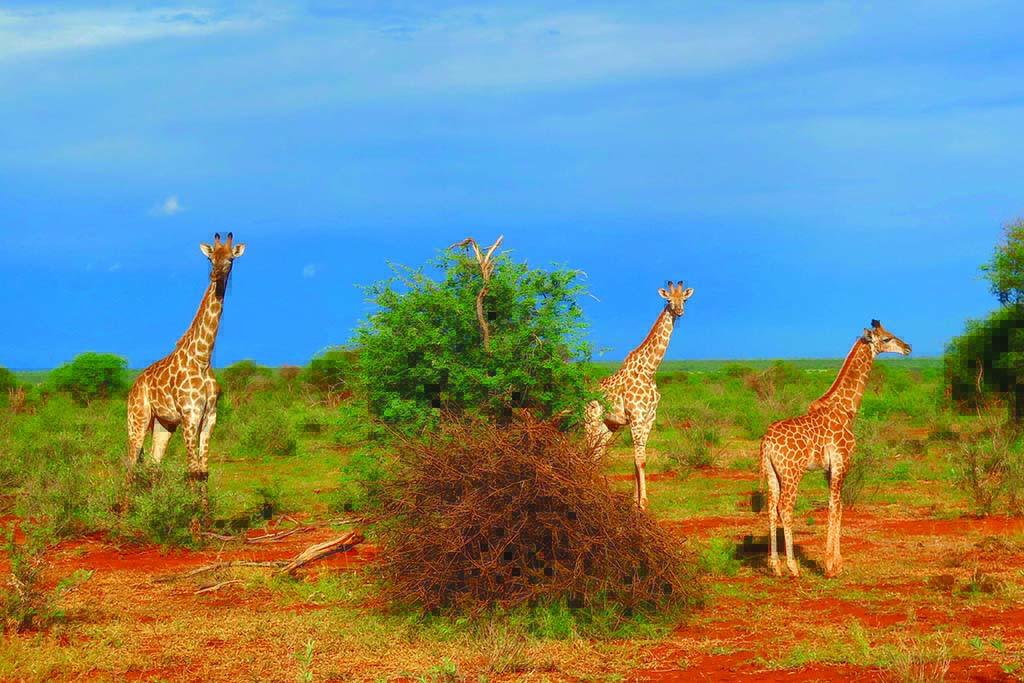 We may not always see the big picture, recognize our place on this earth, or the beauty and balance that sustains us, but here in Africa, it’s what I’ve experienced that makes it all so beautiful.

The sun gives its best last-minute effort to light the African bush, oranges and reds ignite the sky in perfect round spheres. Thorny bushes scratch my ankle as I drop off the open-top safari vehicle, and our guide David prepares gin and tonics. A pair of Gray Louries sail by screeching their “wahhh” sound that gives them the name “go-away bird,” but they ignore us for greener pastures, taking the last bit of light with them. A night breeze welcomes us to a new side of Madikwe Game Reserve (www.madikwegamereserve.co.za). The baton has been handed over from the elephants, giraffes, and kudu to the night creatures whose sleepy night eyes awake with the rise of the moon.

Our vehicle’s light turns on when we grab our sundowners, and pollen is still twirling in the nighttime breeze with hopes of becoming new life. I walk forward and away from the chattering of my fellow travelers. Bathed in the light of thousands of stars, I close my eyes and hear the creatures whose land this belongs to. It’s a Dolby Surround of insects. Calls, cackles, clamors, chirps, hoots, ballyhoos, and songs all echoing and reechoing through the reserve. The moon is like a conductor, bringing out this otherworldly symphony, allowing me to expunge my modernday thoughts and permiting my imagination to paint this experience. A hand grabs me from behind as I’m in my own world, and I am startled. It’s our tour guide. “Sometimes,” David says with a voice that seems to extoll wisdom. “It’s what we don’t see that makes it so beautiful.” 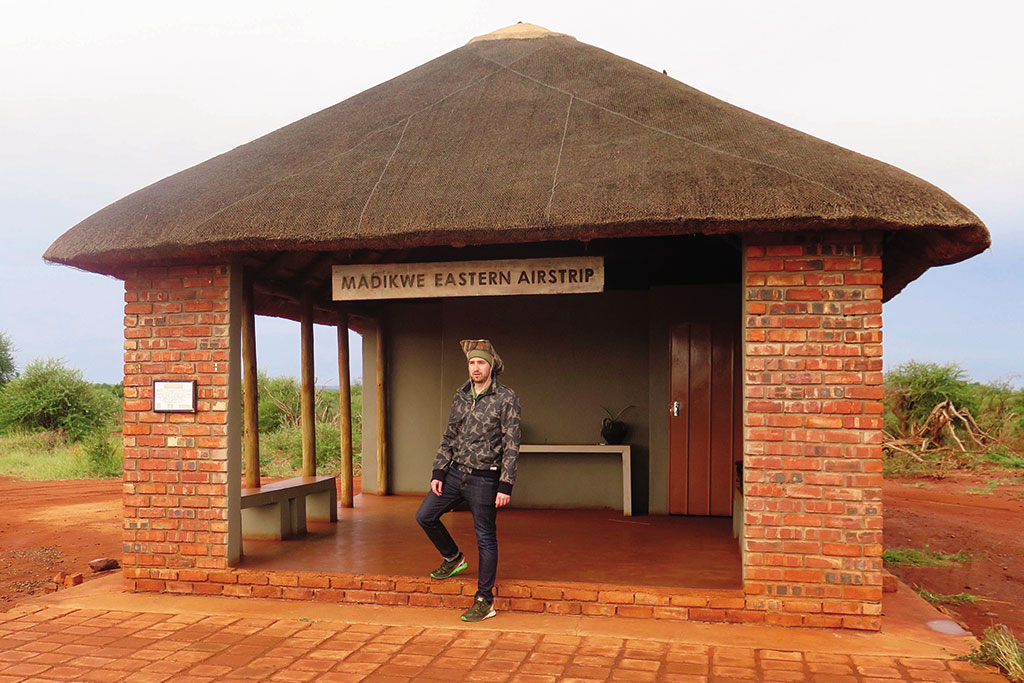 The Author at MadiKwe Airstrip

High above South Africa, I’m clinging to the seat in front of me in a prop plane operated by Federal Air (www.fedair.com). Keeping my mind off the aircraft’s Fisher-Price size, I attempt to play connect the dots with the tiny dirt roads that seemingly disappear into the bush just to reappear to attach tiny towns. Our twentysomething- year-old pilots excitedly check off their to-do lists while surveying their route to the Madikwe Game Reserve, and their occasional giggles and relaxed demeanors assuage my fears. We approach the airport/landing strip after the hour-long flight and roll into the nature reserve with surprising ease.

David, our safari guide, eagerly waves to us, wearing a color spectrum of beige to beige, and leaves his safari vehicle with the airplane propellers turning behind him. There are moments in travel where something is just how you picture it, and this is it. We say goodbye to the pilots who are all ready for another takeoff, destined for another lodge. And we load into the safari vehicle. 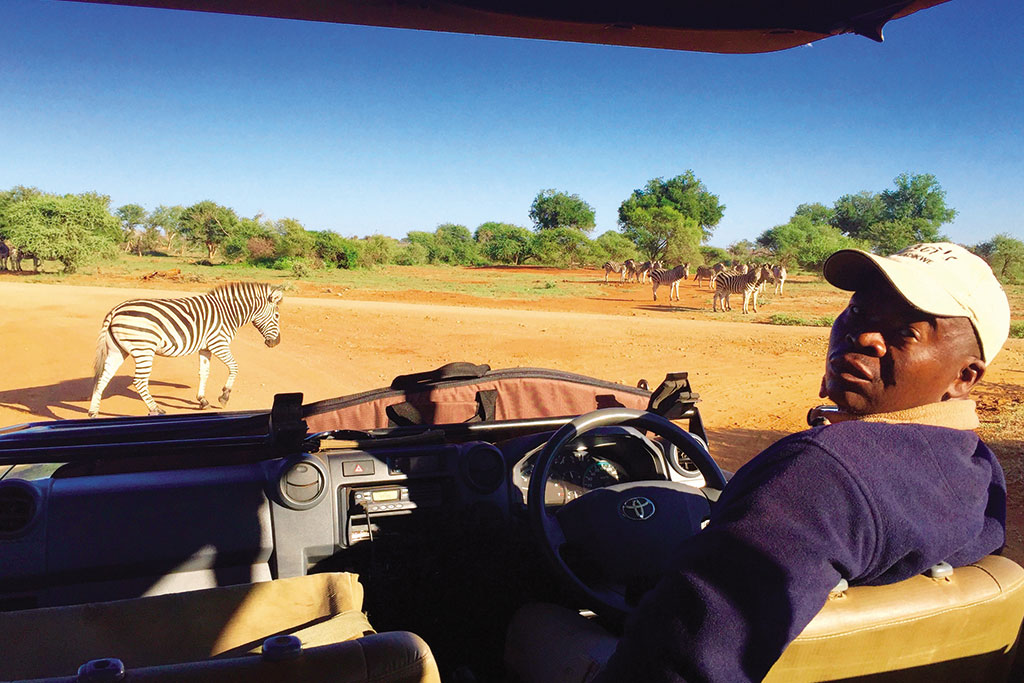 Like riding a horse, the bounce of the car has a learning curve. Trial by error. We eventually get the hang of not getting smacked in the face by a branch by extrapolating distances. It’s also best to lean into those curves! Over the rock paths and through the thorny bush, we arrive. A sign for Jaci’s Lodges (www.jacislodges.com) greets us as we roll into an oasis that wraps around a large watering hole filled with small antelopes called steenboks that quite literally prance out of the vehicle’s way. Birds rest in the afternoon sun atop Jacki’s name, and they stare enquiringly as we approach the gate to the compound. The staff is lined up outside, holding fresh cocktails, and we’re lead into the sitting area in Jaci’s open-air Tree Lodge. We’re in just one of the compound’s two accommodations, the other being Jaci’s Safari Lodge (which is best suited for larger groups).

Each of us is brought into our own tree house. Connected by walkways above the bush, small deer run wild below and eye-level squirrels are startled by our presence. Each home is far enough away from the next to allow guests to experience seclusion. As we walk on my deck and into the high-ceilinged room, I am instantly drawn to the massive stone bathtub. “First remember when you come into your room, lock the latch, or the monkeys may get in,” the man showing my room says. I laugh. He gives an I’m-very-serious headshake. There is a huge bed and a comfy beanbag chair to fill the little downtime I’m planning on having, and an outdoor shower to wash the hard-earned layer of dust from tracking wildlife. Air-conditioning, a ceiling fan, bug spray, suntan lotion, and flashlights are all provided, so pack light (the flight won’t allow you to bring too much gear anyway).

Gum poles and African rosewood interweave within each room, creating a beautiful organic presence to the space that’s only heightened by the sounds of birds and insects (and the occasional lion roar that’s been reported) from right outside the window- lined wall.

“I made this especially for my American friends,” the chef tells us as we enter the open-air dining room where he’s created a nice spread for afternoon tea to fuel up before our first game drive. Munching on honey-glazed chicken, tea sandwiches, and freshly made lemonade, we get the lowdown from David on our first game drive, and we also choose our favorite cocktail that he’ll prepare when we are finished with the twohour experience in the park. 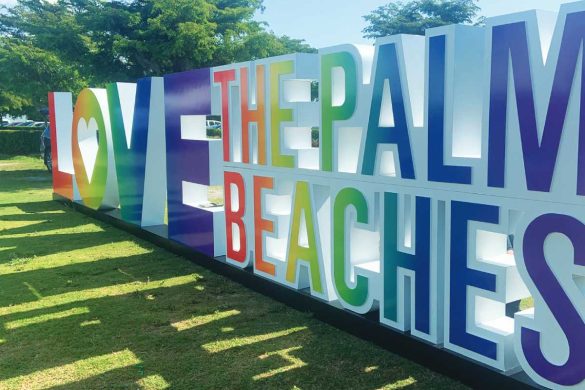 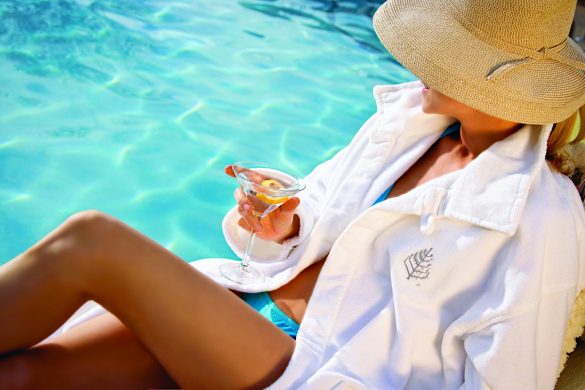