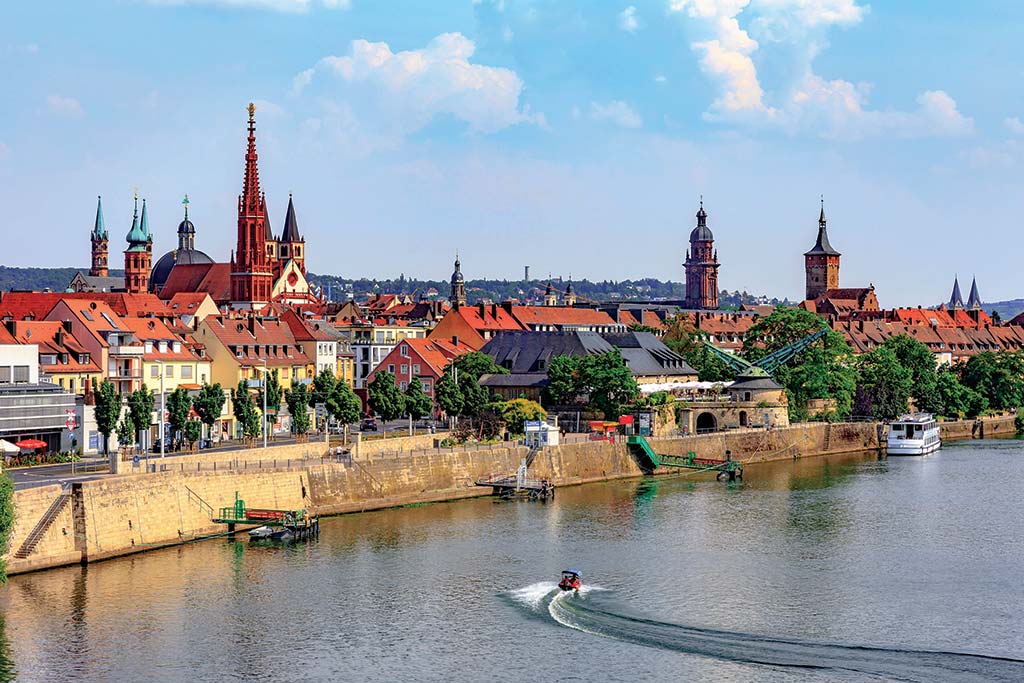 Bavaria’s heritage includes the ever-evolving present, and I realized that my brief glimpse of this region had left me more illuminated, and appreciative of my own balance of responsibility, pleasure, and peace.

My first morning in Bavaria, I drank wine. As our tour group transitioned through a series of whites and reds, the proprietor’s wife, a professional opera singer, serenaded us with a tender rendition of Somewhere Over the Rainbow that would have made Judy Garland proud.

Willkommen to Franconian Wine Country. Located almost precisely in the center of Germany, Franconia is famous as one of the country’s top wine-growing regions. It’s within Bavaria, Germany’s largest state, and enriched by incredible history and enduring art, architecture, gastronomy, and heritage.

I came to explore this landlocked region that I knew little about, and where I’d envisioned dark castles, manly breweries, and hearty meals. But that first morning in the village of Volkach, I was already enjoying an unexpectedly effervescent atmosphere, marked by an a capella song, a tour by Winery Max Müller I’s fourth-generation winemaker, and bright sun glinting through my glass.

Graced with fine weather, we set off through the rolling hills of upper Bavaria. Franconian vineyards crisscrossed the landscape, striped with trails where cyclists pedaled between towns and historic wineries. We stopped for a traditional “farmer’s lunch” of sausage, cheese, pickled vegetables, and bread in a former monastery, which is now the decidedly modern Vogelsburg Hotel & Restaurant (Vogelsburg 1, Volkach. Tel: 49-9381-710-8970. www.vogelsburg-volkach.de).

From the sprawling open-air terrace overlooking the Main River valley, I sipped Juliusspital wine. Since 1576, the Juliusspital Foundation has ingeniously made spectacular wines, and uses its profits to fund a hospital.

This was suddenly starting to feel like the Germany I anticipated, where people devise a way to balance pleasure with responsibility. I watched cyclists roll up to Vogelsburg for tastings, each contentedly offsetting exercise with cigarettes, wine, and schmalz (the traditional German pork- or poultry-fat spread). I was finding myself beguiled by a sense of serenity derived from dwelling in pleasure over guilt.

By afternoon, we arrived in charming Wurzburg. The city was originally colonized by Celts in the fourth century, and is home to the medieval Marienberg Fortress (Tel: 49-931- 205940. www.museum-franken.de), built to protect the wealthy diocese from angry uprisings. These days, you can tour the grounds, explore its museum’s impressive art and history collection, and behold a perfect hilltop panorama of Wurzburg. 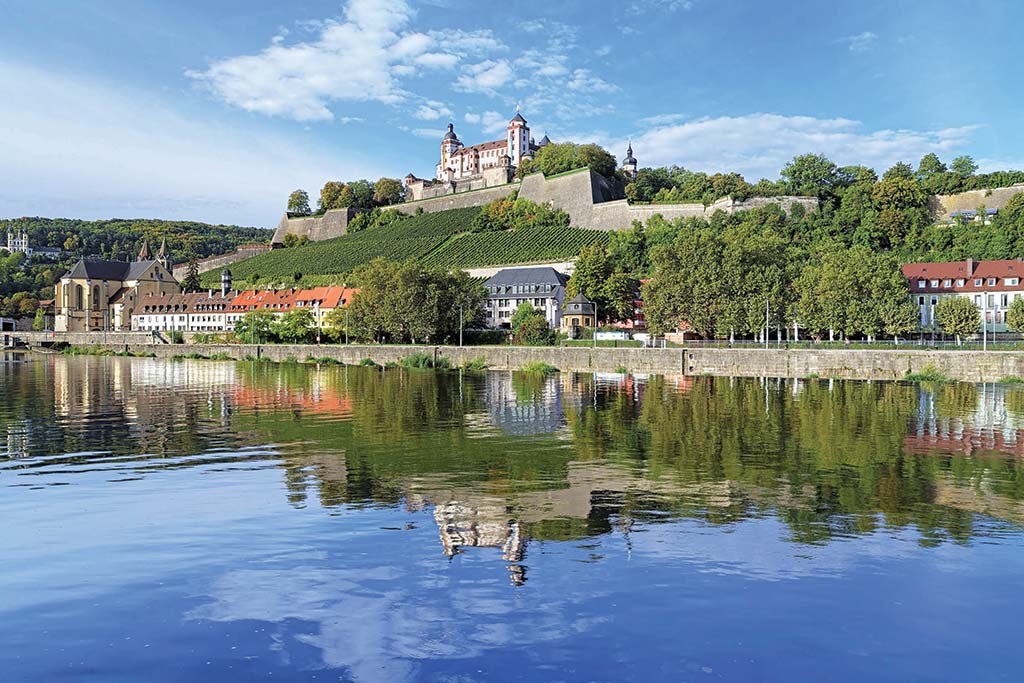 Marienberg Fortress-and the Main River in Wurzburg By Mikhail Markovskiy

The view is of a picturesque Bavarian capital, marked by steeples and buildings rebuilt after World War II. Whether by miracles or solid German engineering, a few prized points of architecture endured the war. The most awe-striking is the Wurzburg Residence (Residenzplatz 2. www.residenz-wuerzburg.de), an 18th-century baroque palace that’s now a UNESCO World Heritage Site.

As much as I anticipated a certain grandiosity in the palace, I wasn’t prepared for its extreme opulence spread across 1.5 million square feet. The ballrooms, bedrooms, and halls are incredible, but the arrivals court alone is worth a visit to Wurzburg. Its grand staircase is crowned by the largest ceiling fresco ever painted, depicting the largely imagined, magical worlds of America, Asia, and Africa; and the contrast of civilized, regal Europe that positioned Wurzburg as a center of high culture. Even more eye-catching are the threedimensional sculpted figures that physically emerge from the vaulted mural’s edges. 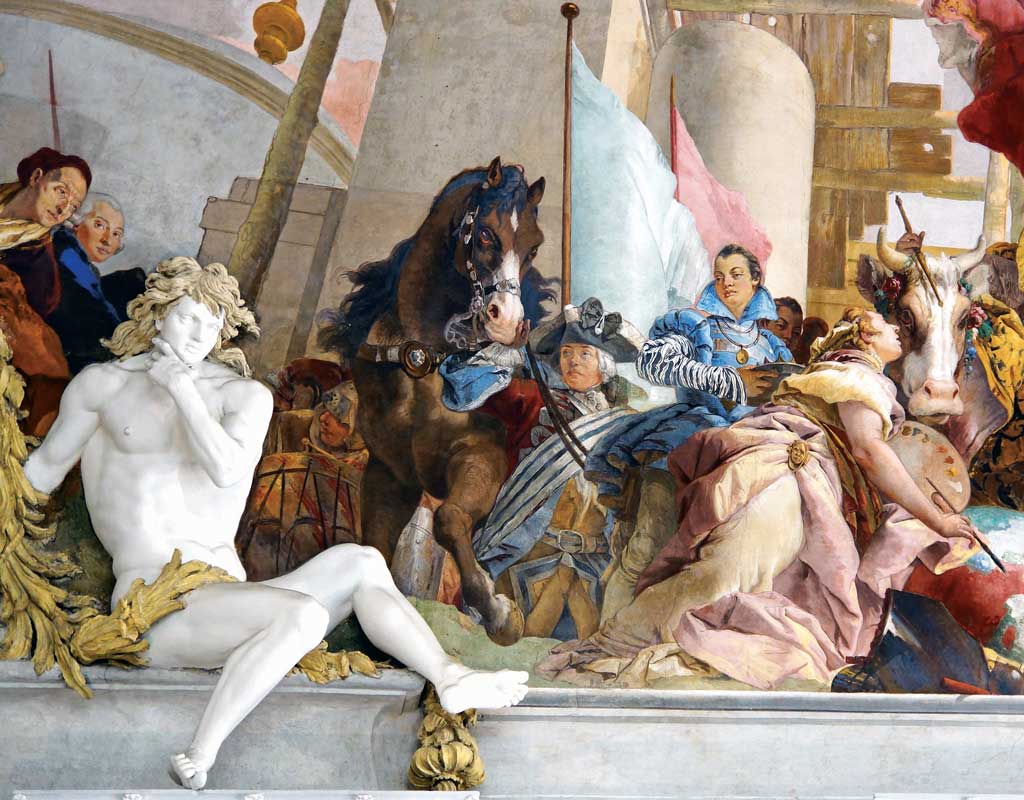 Whether by miracles or solid German engineering, a few prized points of architecture endured the war. The most awe-striking is the Wurzburg Residence, an 18th-century baroque palace that’s now a UNESCO World Heritage Site.

Ornate baroque and rococo features carry through the palace and its magnificent gardens. Beneath the structure is the Staadlicher Hofkeller’s (Residenzplatz 3. Tel: 49-931-3050923. www.hofkeller.de) famous wine “cellar”—though that word drastically understates the scene. It’s actually an enormous, dark thermal haven where oenophiles can rejoice at the sheer volume of the casks. I learned there that the palace employed thousands and often compensated them with this state-made wine instead of money.

Today, the medieval-era Hofkeller is open for tours and tastings, plus a shop where you can buy traditional Franconian varietals. As a white-wine enthusiast, Silvaner is the grape that seduced me with its subtle dry-fruity balance. Nearly every winery in the region produces a Silvaner, usually sold in a “bocksbeutel,” a roundshaped bottle that fit into a holster and won’t roll down a hill (yes, German engineering benefits every aspect of society), but the Hofkeller’s version stands apart from the rest, maybe because it’s been perfected over centuries.

The pedestrian-only Old Main Bridge of Wurzburg crosses the Main River and, in warm weather, is a beloved public gathering place where you can buy a glass of wine from one of the bars along its approach, and drink it while people-watching.

Cross to the west side to check out WuF Zentrum (Nigglweg 2. Tel: 49-931- 412646. www.wufzentrum.de), the local LGBT center that’s served the community since 1972. While Wurzburg doesn’t have a permanent gay bar, WuF Zentrum is involved in planning monthly discos (usually on first Wednesdays), game nights, “coffee gossips,” and other events around town, all listed on its thorough website. 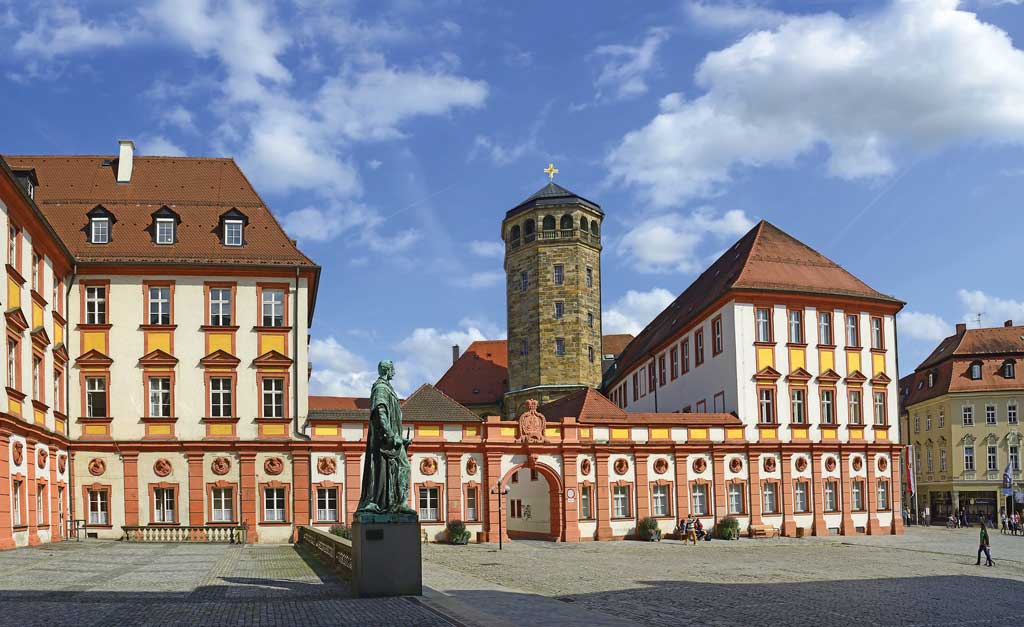 Old Castle of Bayreuth By Pecold

Next on my journey was an eastward trek along the Main River into a town famous for its musical heritage: Bayreuth. It’s a small city that’s pleasantly walkable, and whose core is dominated by the herstory of Wilhemine. She was an educated Prussian princess who in 1731 married Frederick Margrave of Brandenburg- Bayreuth. Wilhemine quickly made her new home into a thriving intellectual and cultural province. Among her most marvelous accomplishments was commissioning the wooden, baroque-style Margravial Opera House (Opernstrasse 14. Tel: 49-921- 7596922). It’s now a UNESCO World Heritage Site whose every inch was restored to its original glory for its spring 2018 reopening.

For opera lovers, Bayreuth is practically a pilgrimage site thanks to the truly stunning Margravial Opera House, but the city also is home to the Bayreuth Festival House (Festspielhügel 1-2. Tel: 49-921-78780. www.wagneropera.net/bayreuth), a performance space opened in 1876 that was built by and dedicated solely to the works of German composer Richard Wagner. You can visit his house and see some of his personal affects, and dive deeper by visiting his namesake Richard Wagner Museum (Richard-Wagner-Strasse 48. Tel: 49-921- 757280. www.wagnermuseum.de/en). 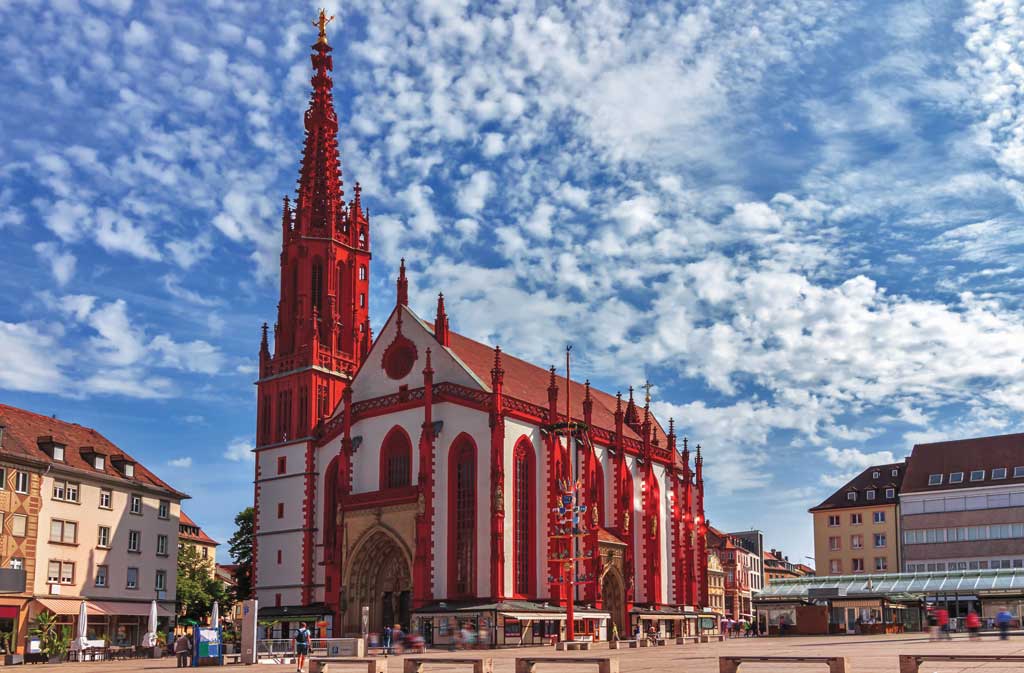 Bayreuth is a town that treasures heritage while offering bits of modernity. On the historic side, for example, I enjoyed four centuries of hospitality at the Golden Anchor Hotel & Restaurant (Opernstrasse 6. Tel: 49-921- 7877740. www.anker-bayreuth.de). The 13thgeneration proprietor Eva Graf runs the hotel that’s hosted Mark Twain and other luminaries, and it may be home to a prankster ghost.

Down the pedestrian artery of Maximilianstrasse, I enjoyed the Bavarian dishes at Oskar Tavern (Maximilianstrasse 33. Tel: 49- 921-5160553. www.oskar-bayreuth. de), as much as the simple bratwurst sold in stands dotting the promenade. And at last, I paused from the Franconian wine to tour and sample Maisel Brewery (1 Andreas-Maisel-Weg. Tel: 49-921-401234. www.liebesbier.de). In business since 1887, Maisel is one of the country’s most popular beer brands, and the family-owned operation offers a great tour. Taking steps into the 21st century, Maisel also offers a huge indoor/outdoor restaurant with the kind of filling fare that pairs with its array of brews.

The end of my Bavarian journey brought me to Nuremberg. The city has a complex history that began in medieval times, continued on as a capital of the Holy Roman Empire, then as a center of the German Renaissance. In the 20th century, it was the site of major WWII activities followed by the famous Nuremberg trials which brought war criminals to justice.

It’s inevitable that a visit to Germany and to cities like Nuremberg will raise curiosity and questions about both wars. This city is especially fascinating as the site of Nazi Party rally grounds, a huge development on the edge of town that never saw completion. Still, sections of the stadium and Congress Hall remain, partly deconstructed. Even though they were in use by the Nazis for only a few years, I found them almost equally creepy and mesmerizing. 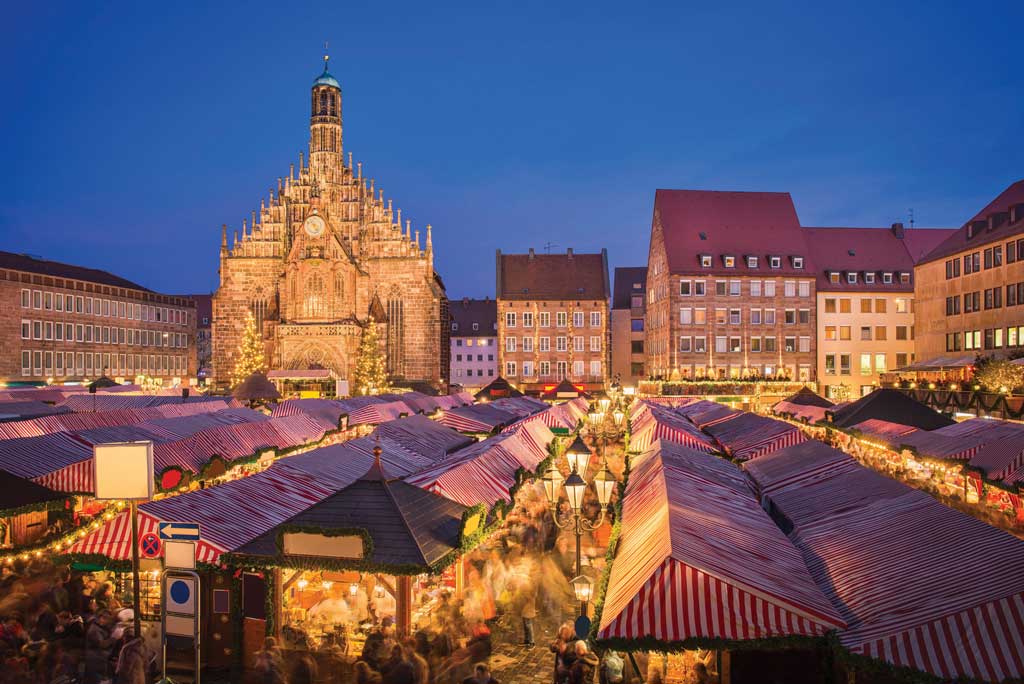 A large corner of the gigantic Congress Hall is now home to the Documentation Center (Bayernstrasse 110. Tel: 49-911-2317538. www.museums.nuernberg.de/documentation-center), a comprehensive national history museum that explores war-related history, Hitler and Nazism, war atrocities, and post-war recovery. The place is powerful beyond words, and I am lucky to have visited with an insightful, articulate guide, Thomas Schmectig, whose explanations led me to a far greater understanding of events that are seemingly incomprehensible.

When I arrived in Nuremberg, I knew the city’s name only because it preceded “trials.” I soon learned, however, that Nuremberg is an easygoing city known for its gingerbread, spice trade, and Christmas traditions. In its central, walled area, I sampled tasty Nürnberger bratwurst, the small, thin bratwurst that’s distinctly flavored with fresh marjoram and served with potato salad or sauerkraut.

Inside the walled city are big shopping strips, town squares, the ubiquitous Brezen Kolb pretzel booths, and the Pegnitz River flowing right through the middle. In the northwest corner, old-fashioned half-timber structures line streets on the way to the medieval Nuremberg Castle (Burg 13. Tel: 49-911- 2446590. www.kaiserburg-nuernberg.de). Beneath the castle is a far-reaching underground series of corridors where brewers stored their barrels; and in the early 20th century, where Nazis stored stolen artworks. 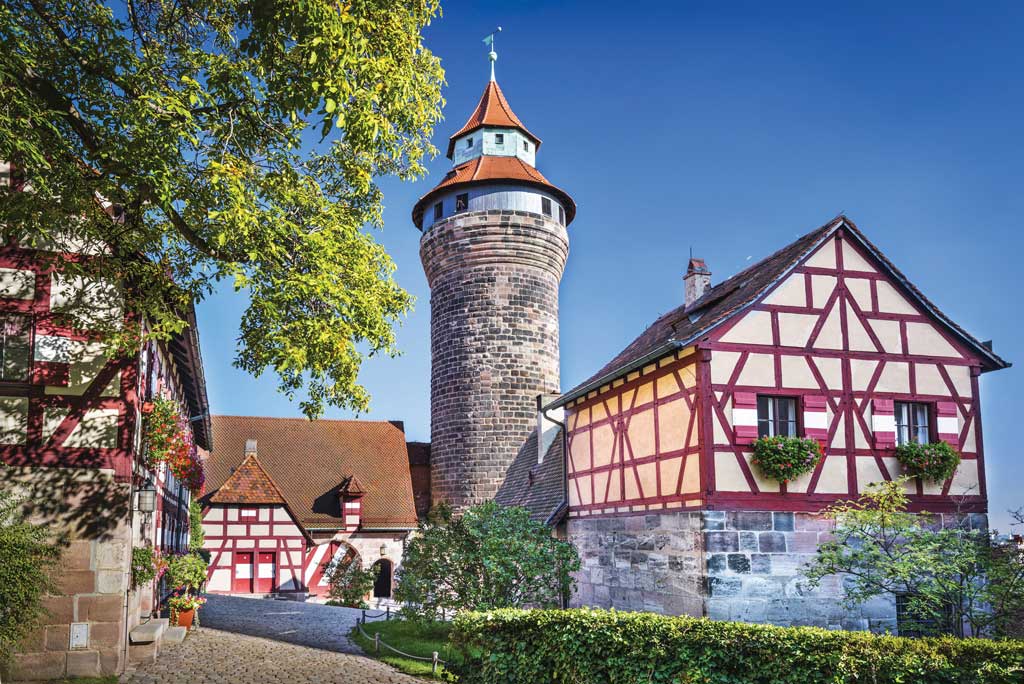 That pocket of the city is home to several notable restaurants, like Sebald (Weinmarkt 14. Tel: 49-911-381303. www.restaurant-sebald.de), considered one of Germany’s top restaurants. Just across the river, Obere Worthstrasse is a good spot to browse the boutiques, snack at small cafés, and to fill up at Inn Karlsbruckla (Obere Worthstrasse 2. Tel: 49- 911-2373171. www.karlsbrueckla.de), one of the city’s oldest restaurants. At Ayrer’s Distillery (Bergstrasse 19. Tel: 49- 911-2449859. www.hausbrauerei-altstadthof.de), visitors can enjoy German comfort food and an assortment of houseaged spirits and ales.

Among its monuments and markers, Nuremberg includes two notable LGBT sites. Just outside the historic walls near the Opera House, an LGBT Holocaust memorial marks the site of a former public bathroom that was known for gay activity. Inside the walls near St. Jakob Church plaza, a memorial for victims of HIV/AIDS is embedded in the cobblestones, upon which victims’ names are inscribed. That square is the site of August’s Nuremberg Pride celebration (www.csd-nuernberg.de), also dubbed Christopher Street Day.

On my last day, I headed west into the Gostenhof (Goho) neighborhood to peruse the lesbian-owned shop Fach Marie (Fürther Str. 50. Tel: 49 911 5689903. www.fachmarie.de), that sells locally made souvenirs and housewares. Then I dropped by lesbianowned Salon Regina (Fürther Str. 64. Tel: 49- 911-9291799. www.salonregina.de), a cute café-bar and boutique hotel, where I sat with my Silvaner wine and pondered how a place like Nuremberg could transition so much over the course of a century.

In the big picture, Bavaria’s heritage includes the ever-evolving present, and I realized that my brief glimpse of this region had left me more illuminated, and appreciative of my own balance of responsibility, pleasure, and peace.