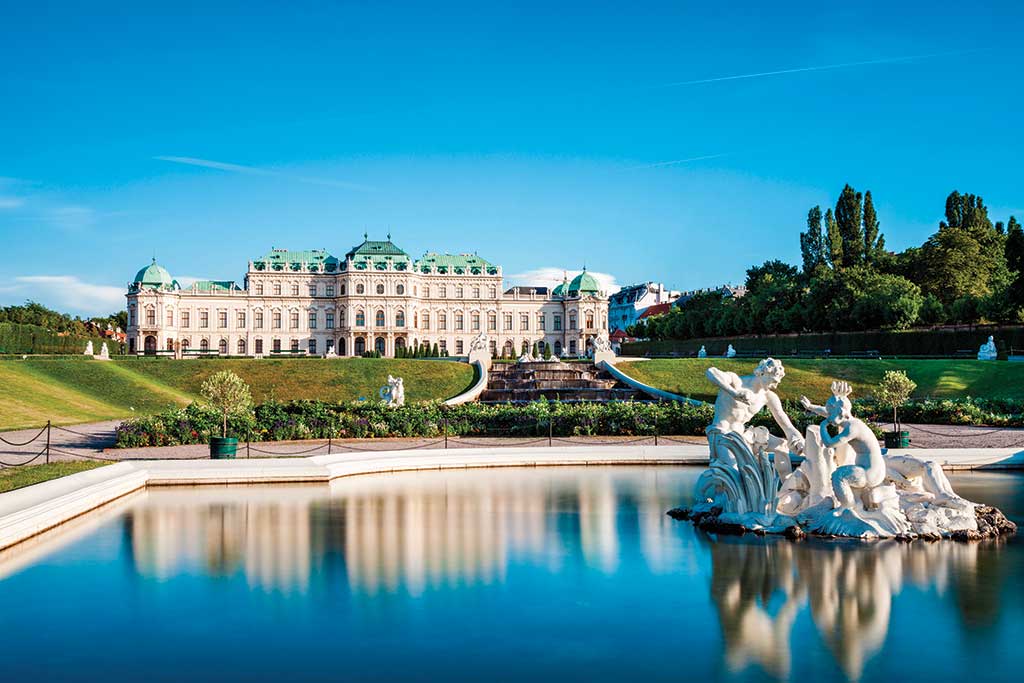 There are many good hotels in Vienna, but to feel like true Viennese royalty, book a room, a lunch, or a dinner in the most exquisite hotel in town, the historic Hotel Imperial

If you plan on visiting Vienna in 2018, you’re in for a treat. This year, the city will be celebrating the lives and artistic creations of Klimt, Schiele, Moser, and Wagner. These virtuosos, who coincidentally all died in 1918, together help make Wien a mecca for fine arts that continues to this day.

As a destination for art lovers, the Belvedere Museum & Palace (www.belvedere.at) is a banquet. Walking through its galleries, one gets the feeling the ghost of Gustav Klimt is present. The museum was built in the 18th century for Prince Eugene of Savoy as a summer residence; the prince, who was gay, had numerous palaces built during his reign. This one is sprawling and majestic, the very definition of palatial. It comprises two imposing white buildings overlooking extensive formal gardens, a large pond, and elaborate statuary and fountains. 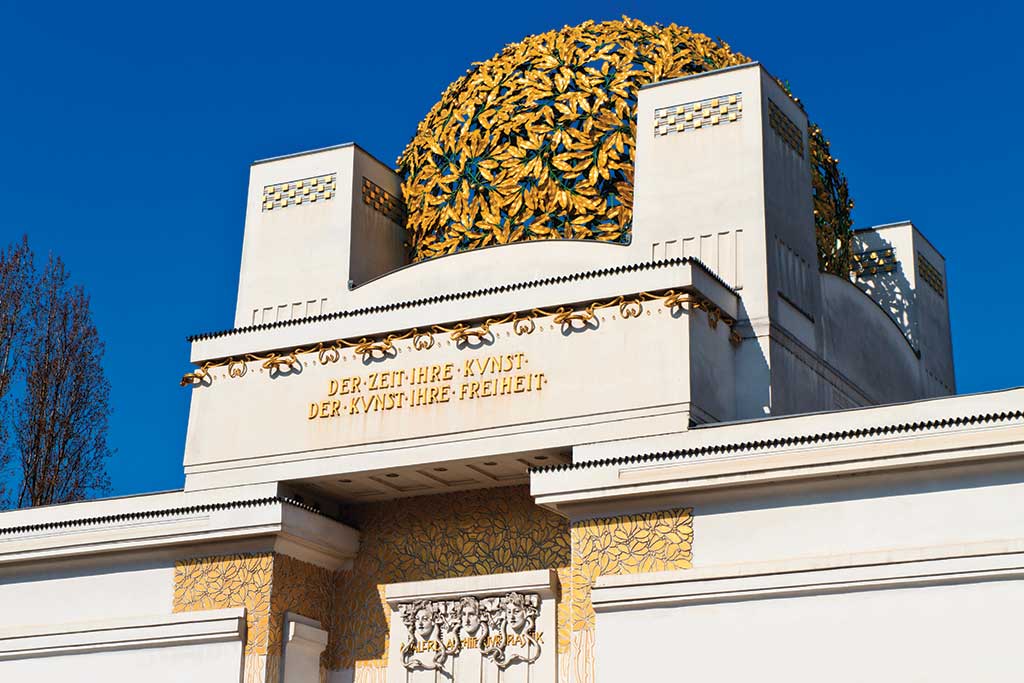 Featured here is Klimt’s most famous “The Kiss” and many other of his works. Also on display are paintings by other artists, hanging in galleries on a background of dark red wallpaper under the sparkle of Vienna’s ubiquitous crystal chandeliers. Kokoschka, Klimt’s friend and a member of his inner circle, is represented here, as is the Norwegian artist Edvard Munch, his contemporary. There is also a comprehensive collection of the statues of the contorted faces created by the 18th-century artist Franz Xaver Messerschmidt.

Literally, days can be spent exploring the works in the upper and lower buildings. It’s also one of the only museums to allow visitors to photograph its masterpieces.

Find more of Klimt at the newer Leopold Museum (www.leopoldmuseum.org), which offers the largest collection of modern Austrian art; the Secession Building (www.secession.at) that features Klimit’s notable “Beethoven Frieze”; and at the Kunsthistorisches Museum (www.khm.at/en) where his frescoes are displayed. There are also images of his works on watches, dishes, pads, and pens everywhere you look.

Everywhere you look is the city’s history as well. Dating back to the Old Stone Age, Vienna, originally Wenia, has endured sieges, the Bubonic Plague, a Turkish invasion, Napoleon, and Adolf Hitler, who once applied to but was not accepted by the prestigious Academy of Fine Arts (www.akbild.ac.at) here.

Again and again, the Phoenix city rose from its ashes. Its prosperity is obvious on the Ringstrasse, the main street that circles the city. Behold the elegant 19th-century architecture, the shops, prams, and trams. The hop-on-hop-off Vienna City Tour Bus (www.viennacitytours.com) is fine for an overview. The red line is considered the best, and the earphone guides provide a choice of languages. The buses are easily accessible in front of the 1869 Renaissance Revival Opera House (www.concertvienna.com), among other stops.

Vienna has 23 districts and their appropriate numbers are noted on corner street signs. Number One is the historical center. Here, you’ll find the Imperial Palace (www.hofburg-wien.at), also known as the Hofburg Palace, now a museum incorporating the President’s quarters, Austrian National Library, a silver collection, the crowned jewels, and the famous Spanish Riding School. This complex is the city’s major dazzle and tourist destination, anchored by St. Michael’s Church (www.michaelerkirche.at), one of the oldest in Vienna. It sits on St. Michael’s Square, with its cobblestones and white horse and carriages, altogether feeling like the heart and soul of Old World Wien. 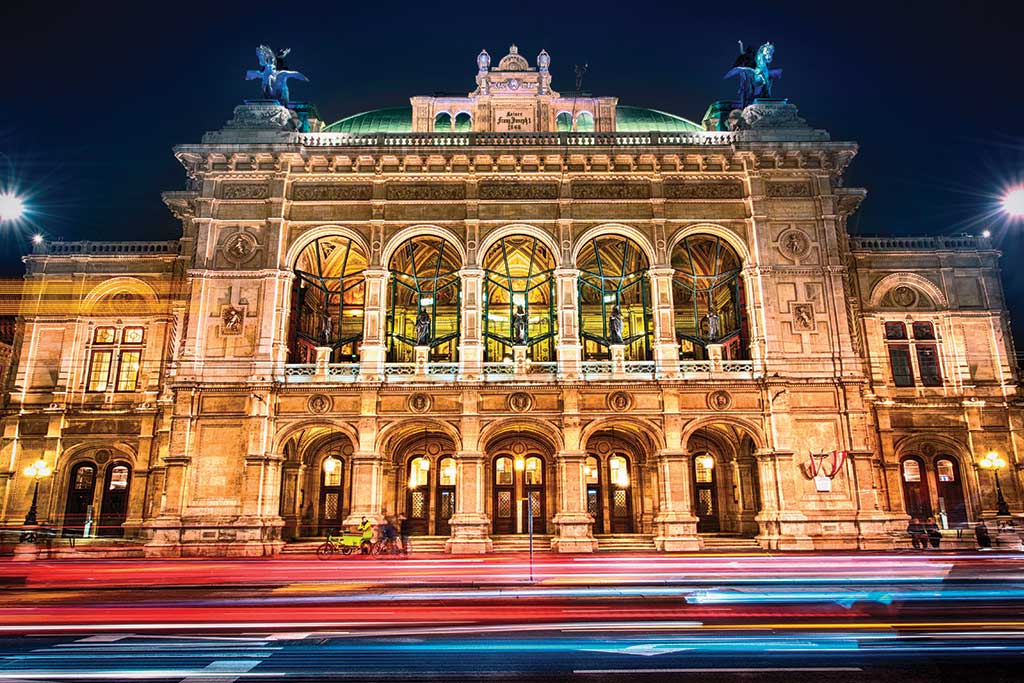 For a look at a lower key part of the city, take a walk through trendy District Two. It’s currently attracting Vienna’s young architects, sculptors, and designers who are transforming the area that has always been the city’s Orthodox Jewish neighborhood. A Kosher supermarket and synagogues are still here, and on Temple Street stand four stone pillars memorializing the synagogues destroyed by the Nazis.

New buildings lean on old in this neighborhood, most conspicuous of which is #39 Leopoldsgasse, with its cool and splashy painted facade. Right next door is Leckerbissen, a sandwich and bakery shop, featuring the Viennese specialty, Punschkrapfen, a confection consisting of a rum-soaked white cake frosted in pink icing. Of interest as well is the Karmelite open-air food market, featuring farm-fresh produce, cheese, flowers, and so on, with prices said to be better than those at local supermarkets.

In this area, storefronts that were once shops selling lamps, shoes, or some other consumer products or services, have been turned into the modern Graetzel Hotel (www.graetzelhotel.at).

Nearby, the simple Balthasar Kaffee Bar (www.balthasar.at) at #38 Praterstrasse is part of a new trend that examines the provenance of coffee and its roasting technique. It gets raves not only for its coffee but the laidback atmosphere and service.

The popular and busy Café Ansari (www.cafeansari.at) at number 15 on the same street is spacious, with both indoor and outdoor seating. It’s a good place for breakfast or lunch. A vegetarian menu is also available. 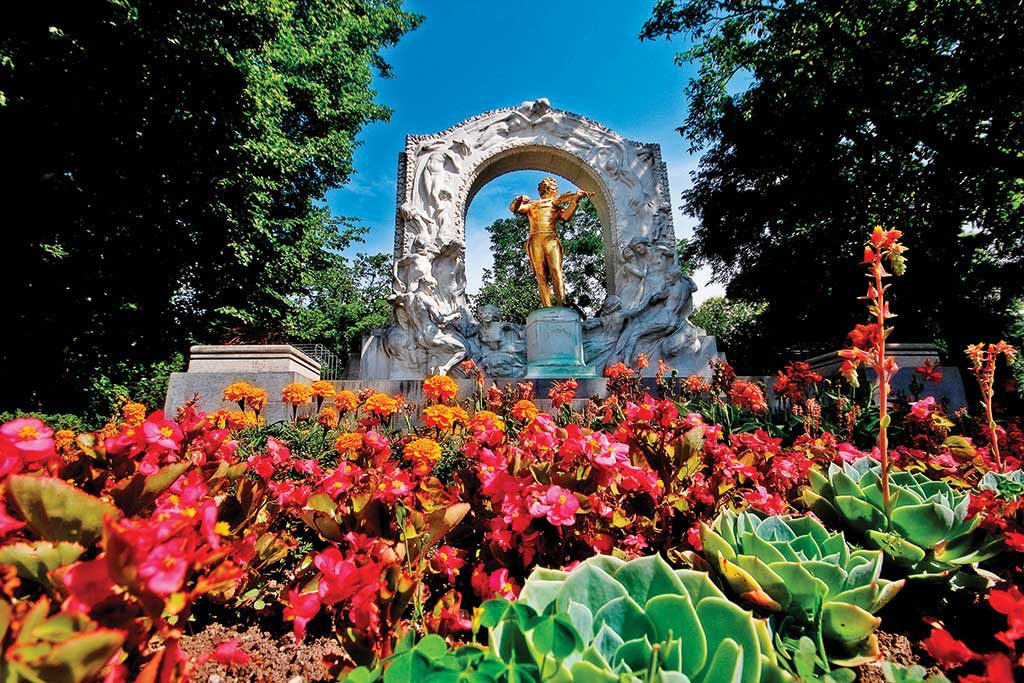 Dance over to #54 Praterstrasse (www.wienmuseum.at/en) where the king of the waltz, Johann Strauss II, lived for seven years with his first wife. It’s a small museum, with his apartment on the first floor. Here is the original furniture and some instruments, including a conductor’s baton, family photos, and caricatures. He composed “The Blue Danube” here, inspired by the famous river that flows through Vienna. Disappointingly, the “Danube” does not look a bit blue, but the famous melody is heard everywhere in the city and could be considered an unofficial national anthem. A newer museum, Johann Strauss Dynasty (www.wien.info/en/music-stageshows/city-of-music/strauss-museum), is located at #3 Mullnergasse. You and your favorite partner might ask where to sign-up for waltz lessons while you’re there!

Here is also a Strauss commemorative star in the sidewalk á la the Hollywood Walk of Fame on the Kärtner Ring and a statue in Stadtpark (www.citywalks.info/vienna/stadtpark).

Sigmund Freud (www.freud-museum.at), another Viennese never to be forgotten, for good or bad, is celebrated at #19 Berggasse. Most of the exhibits in his former apartment turned museum consist of photos, letters, and a few personal items, his hairbrush for example, and there is a couch. But, it is not the couch. It’s the one his patients sat on in the waiting room.

When it comes time to explore gay Vienna, check out the webiste www.wien.enfo/en/viennafor/gay-lesbian/parties-clubs before heading out. It’s updated often.

Some of our favorite LGBT places in the city include the gay bookstore, Lőwenherz (www.loewenherz.at), at 8 Berggasse. Festooned outside with a row of rainbow flags, its space is packed with 2,000 gay titles. Owned by two gay men, Juergen Ostler and Veit Schmidt, they have worked together for 25 years in the bookstore but not as partners in private life. Of gay life in Vienna, Veit says, “It’s pretty normal and very special.” 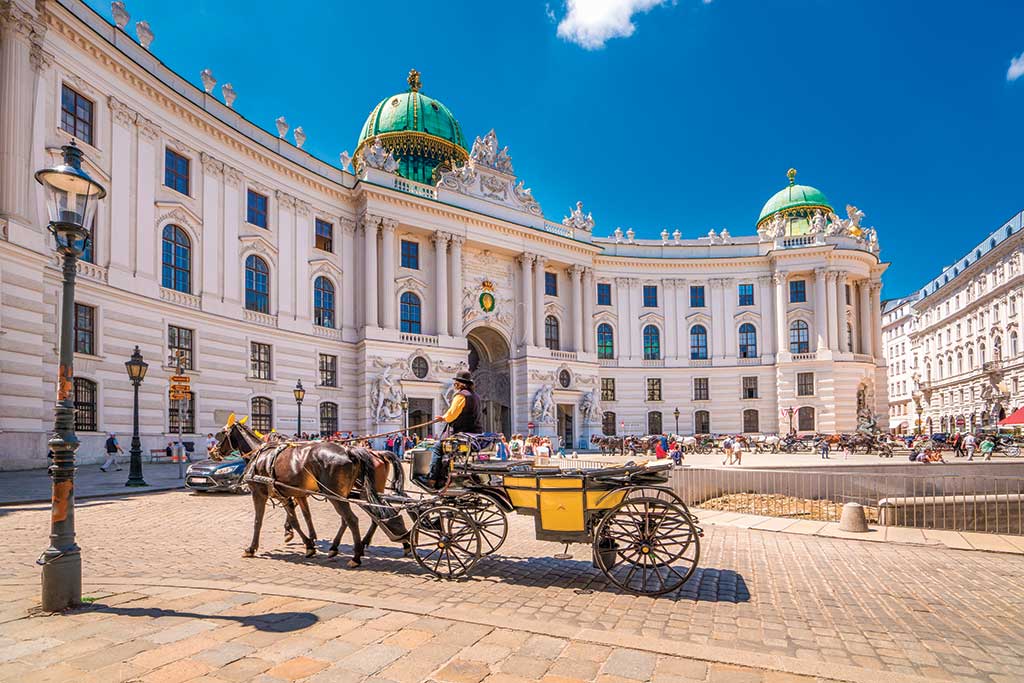 A large corner antique furniture shop not to miss is Lichterloh (www.lichterloh.com). Yes, 20th-century design, international style, is right here in the gay part of town, where it belongs. There’s a oneof-a-kind wall-to-wall bookcase to inspire duplication, but it won’t fit into your luggage. #15 Gumpendorferstrasse.

Off now to check out the Cafe Savoy (www.gayinvienna.com/en/location/cafesavoy) possibly ground zero for the local gay landscape during its evening hours. This 19thcentury bar, with its leather banquettes, brass sconces, old paintings and cozy corners seems like a movie set for a period piece about secret loves. It’s mostly filled with men.

Kaiserbründl, the gay men’s sauna, has a bar, café, and weekly themes with discounts. It also has a history. When Ludwig Victor, the gay younger brother of the Emperor Franz Joseph went to the bathhouse here, he fondled an officer’s butt. Oops! He was banished from Vienna and exiled to Salzburg, where he lived for the rest of his life. www.kaiserbruendl.at

Very special in Vienna is also its many coffeehouses, which seem the very essence of daily life, a place to head when you’re celebrating, socializing, or “when your shoelace breaks” as one Austrian poet put it. Typical and “true Vienna” is Café Schwarzenberg (www.cafeschwarzenberg.at) on the Ringstrasse. Very traditonal, with its dark pannelled walls and marble-topped tables, there’s tea here as well, rows of pastries under glass to choose from, and live music on Sundays.

Before leaving the city, it seems imperative to sample two things: Schnitzel, which is breaded, fried veal, available everywhere and usually served with lemon or lingonberries. If you want a reliable kitchen, modern ambience, and a cute waiter named Norbert, head for Lugeck (www.lugeck.com/en). The Viennese soup pot here is filled with vegetables and delicious too.

Then, there’s the celebrated, acclaimed, and well-publicized Sacher Torte. It’s served at the Sacher Hotel (www.sacher.com/en/hotelsacher-wien), in its Café, Eck or Bar, and there are almost always lines waiting to get into any of these three popular spots. The place is gemütlich, with cozy upholstered seats and little tables with nice china on white tablecloths. 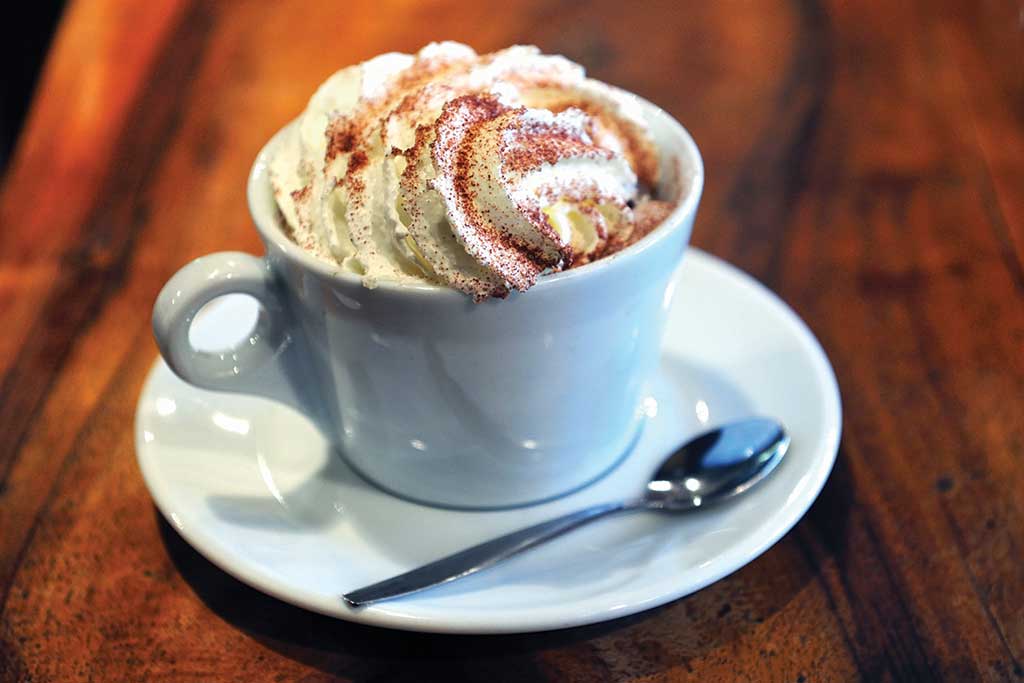 Right nearby is Kärtnerstrasse, Vienna’s principal shopping street. Step into number 51 in the three-floor super charm of Heindl Candy (www.gerstner-konditorei.at), for photo-ready cupcakes or cake slices to go with tea or coffee. There you’ll find sweets in boxes decorated with pictures of Prata, the city’s famous ferris wheel to take back home.

A few steps away is Casino Wien (www.casinos.at/en/wien/), complete with slot machines, roulette, blackjack, Baccarat, and you chance to win or lose.

At number 26, stop in at the J. & L. Lobmeyr (www.lobmeyr.at) shop. It’s the glassware company responsible for most of those chandeliers you’ll stand under in Vienna. Founded in 1823 by Joseph Lobmeyr, it is still family owned. The shop is where you’ll find smaller items like a butter dish that may fit into your suitcase.

There are many good hotels in Vienna, but to feel like true Viennese royalty, book a room, a lunch, or a dinner in the most exquisite hotel in town, the historic Hotel Imperial (www.imperialvienna.com/). The hotel has a grand staircase, a grand staff, and standing under those huge crystal chandeliers is likely to be an experience fit for a prince.