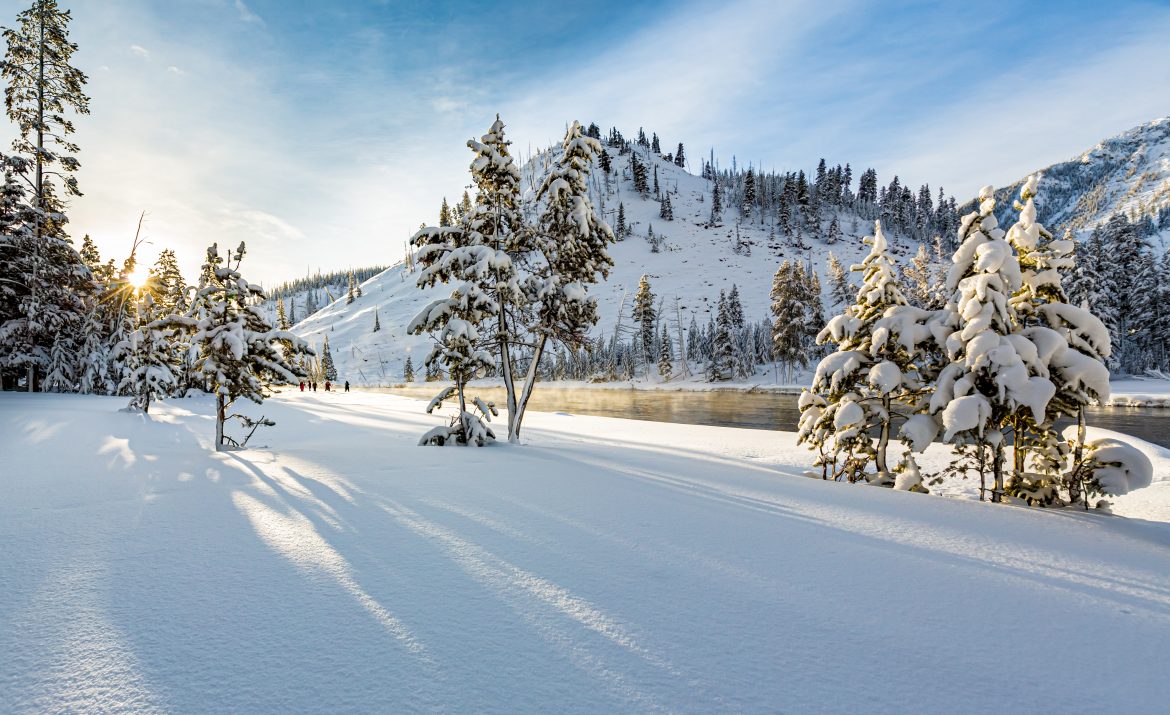 From New England to California, here are ten winter getaways where you can experience the beauty of nature and create lasting memories.

Winter is a special time. Snow-covered landscapes glitter and glow. The world seems to be quieter and slower than normal. And the brilliant reds of cardinals and blues of blue jays can easily be seen against the white backdrop. From New England to California, here are ten winter getaways where you can experience the beauty of nature and create lasting memories. 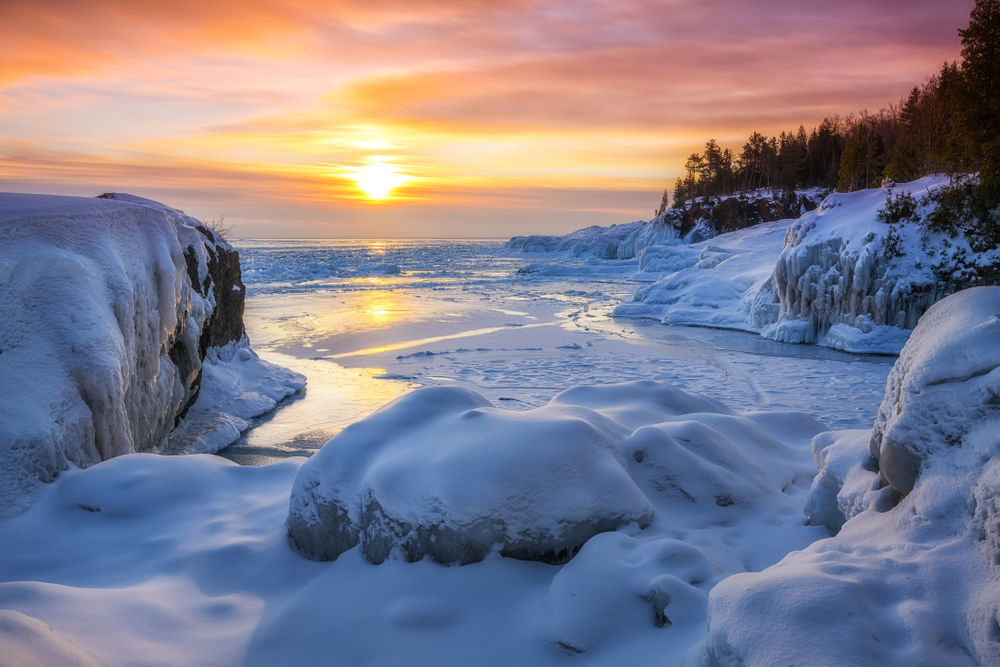 Michigan’s Upper Peninsula is a rugged remnant of what the Great Lakes looked like before they were overdeveloped. The massive peninsula, which is about the size of Vermont, juts out into the Great Lakes, with Lake Superior to the North and Lake Michigan to the South. 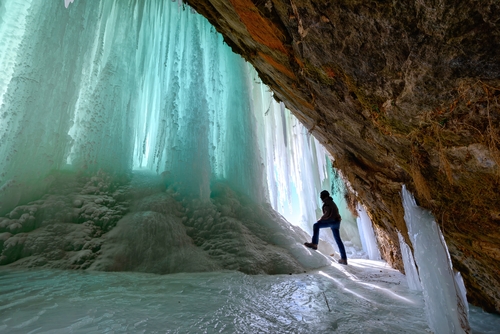 With frozen lakes all around, popular winter activities naturally include ice fishing and ice skating. However, many adventures reside inland too. Snowshoeing through the various State Parks and National Forests is an excellent way to surround yourself in a winter wonderland. The UP is also known for its glorious ice caves. Rushing waterfalls freeze over in the colder months, creating giant icy caverns. These can be found on Grand Island, Pictured Rocks National Lakeshore, and at the Eben Ice Caves.

Before heading home, check out the surprisingly liberal town of Marquette. This college town is filled with boutique shops as well as cafes and restaurants. And if you’re looking to make a vacation out of it, you can lodge nearby in the Big Bay Point Lighthouse B&B, where you can literally sleep inside a converted lighthouse. 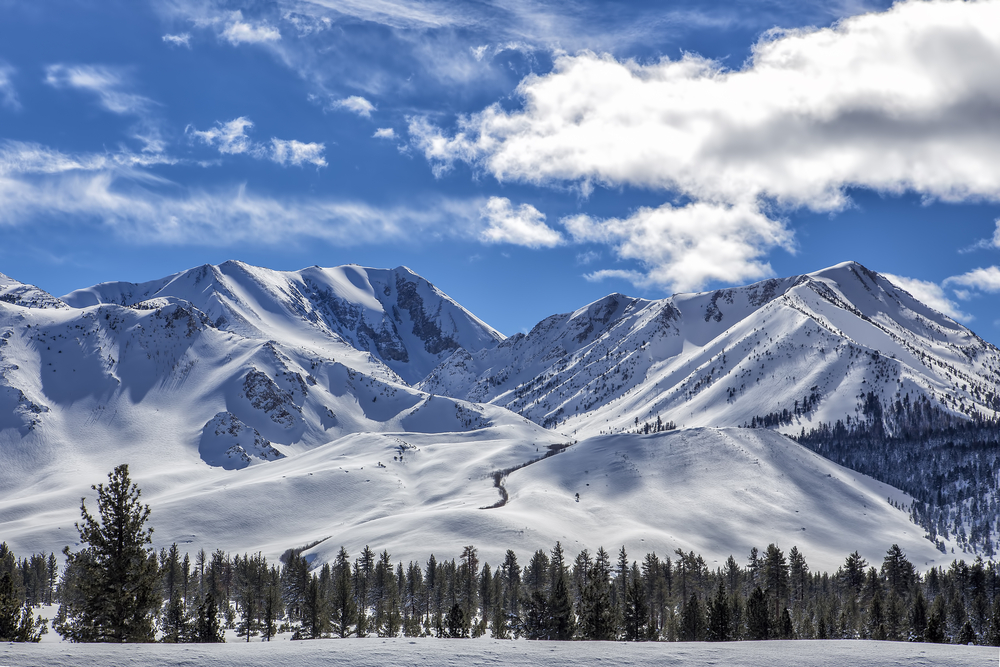 Mammoth Lakes, located southeast of Yosemite National Park, is the perfect spot for the winter sportsman. The famed Mammoth Mountain, along with June Mountain, are renowned for their excellent skiing and snowboarding. 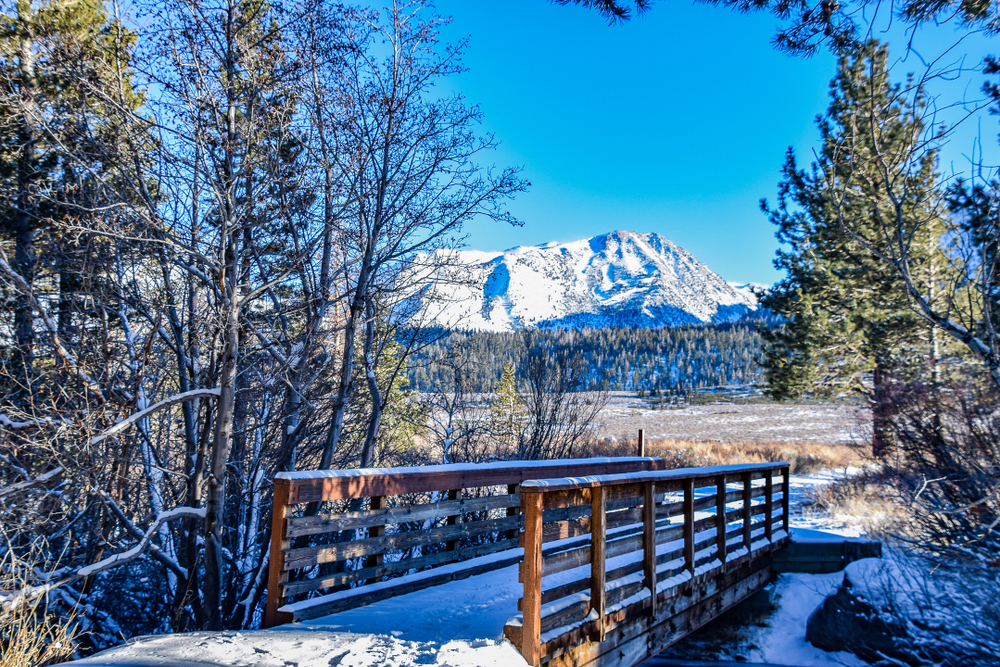 But there are plenty of other activities in the region as well. If you’re looking to escape the crowds, Mammoth is loaded with general stores and outfitters that rent snowshoes and skis for cross-country and Nordic skiing. From there, you can embark on over 140 miles of ski trails throughout the area. You’ll be able to ski through pine forests, frozen lakes, snowy meadows, and more.

Mammoth is also perfect for simply sitting down and doing nothing. The Sierra Nevadas are loaded with mountain peaks, lakes, wildlife, and at night, a spectacular starscape. Sometimes, everyone needs to grab a hot cocoa and simply basque in the beauty of our planet. 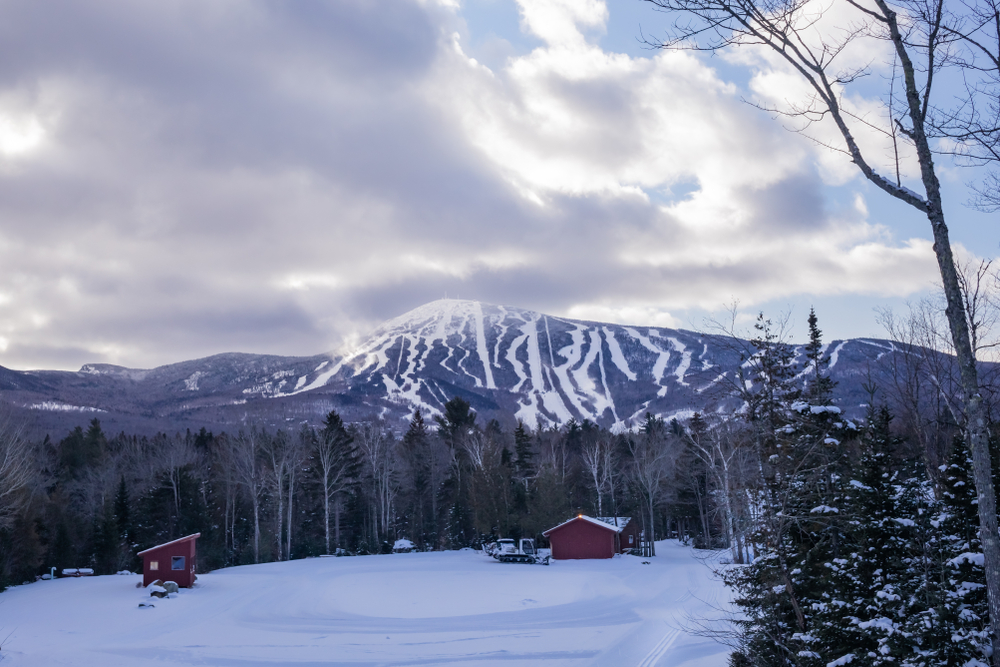 The Carrabassett Valley in Maine combines the adrenaline rush of a ski resort with the beauty and charm of rural New England. Located in the middle of the state, the highlight of the region is Sugarloaf Mountain, home to Maine’s largest ski and snowboarding resort. 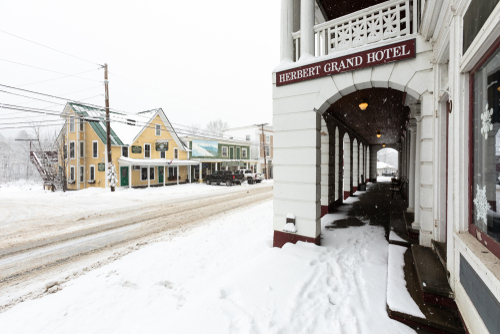 But that’s not all there is to do, being Maine, there are tons of adorable towns like Kingfield, filled with small shops and restaurants. There’s also covered bridges over icy creeks, pastoral farmland, and pristine, old-growth forests. If you’re going cross-country skiing or snowmobiling, keep your eyes open for bear, moose, deer, and the elusive Canadian lynx. Because of Maine’s small population, it remains one of the best states in the country for spotting wildlife, many of which are able to still live in their native habitat. 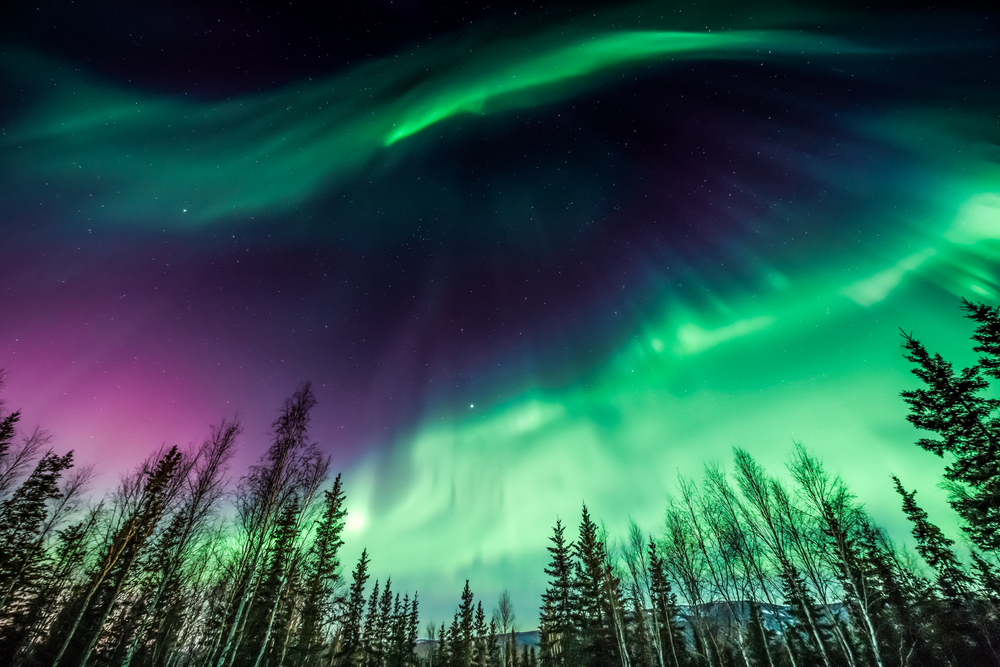 Fairbanks, Alaska is less than 200 miles south of the Arctic Circle. It’s the perfect winter escape for anyone who is, quite literally, looking to escape the real world. During the winter months, Fairbanks gets less than four hours of sunlight each day. But what that creates is an endless, epic adventure in the sky. Not only does every constellation become visible, but so does the Milky Way, as well as the Aurora Borealis. And on some nights, viewers even get to see the Milky Way and the northern lights at the same time. 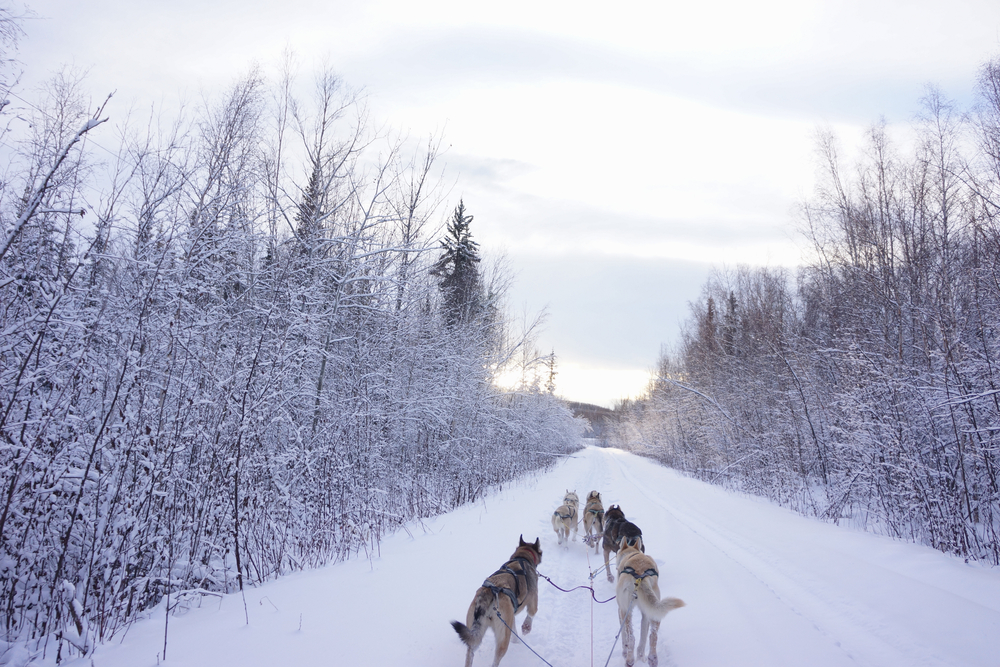 Besides the glory of the night sky, a winter trip to Fairbanks also provides a traveler with a hearty dose of adventure. Sub-zero temperatures, titanic snowstorms, and even the occasional meandering bear…if you’re looking to feel like your living inside an adventure movie, this is the trip for you.

But what most people come out saying is that they formed some of their closest bonds during their time in Alaska. After all, when it’s dark and below zero outside, everyone needs to count on each other. During the hours of daylight you do have, popular attractions include dog sledding and sightseeing. 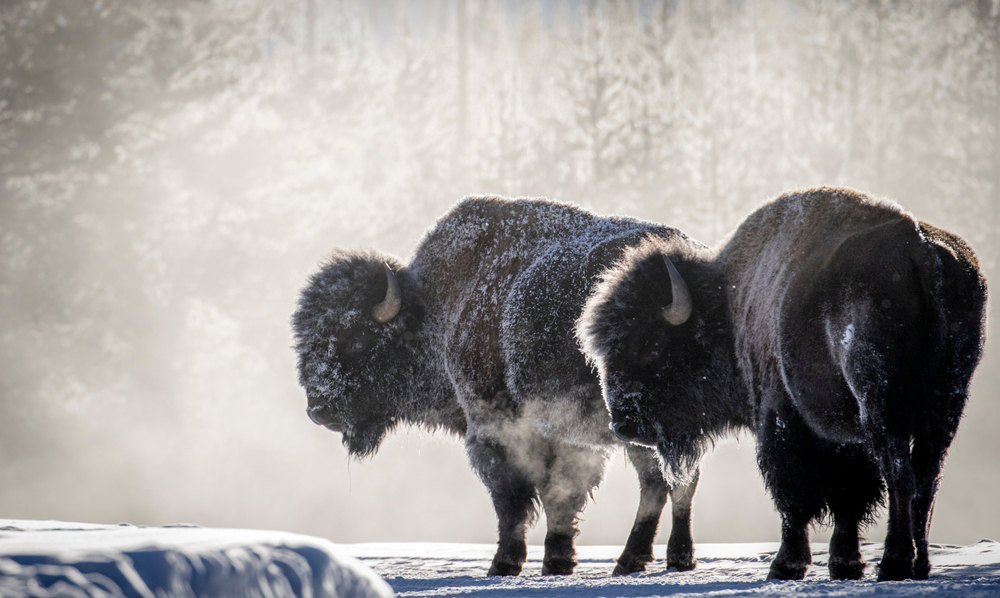 There really is no place left on this planet that’s quite like Yellowstone, especially in winter. Giant volcanic geysers shoot water into the sky, surrounded by snow-covered mountains, grazing bison, and soaring eagles. In fact, there is tons of activity in the park during winter. Animals that hang around the park for the winter months include lynx, bobcats, cougars, elks, moose, wolves, foxes, deer, river otters, bison, and many more. In fact, Yellowstone has the largest variety of mammals in all of the Lower 48. 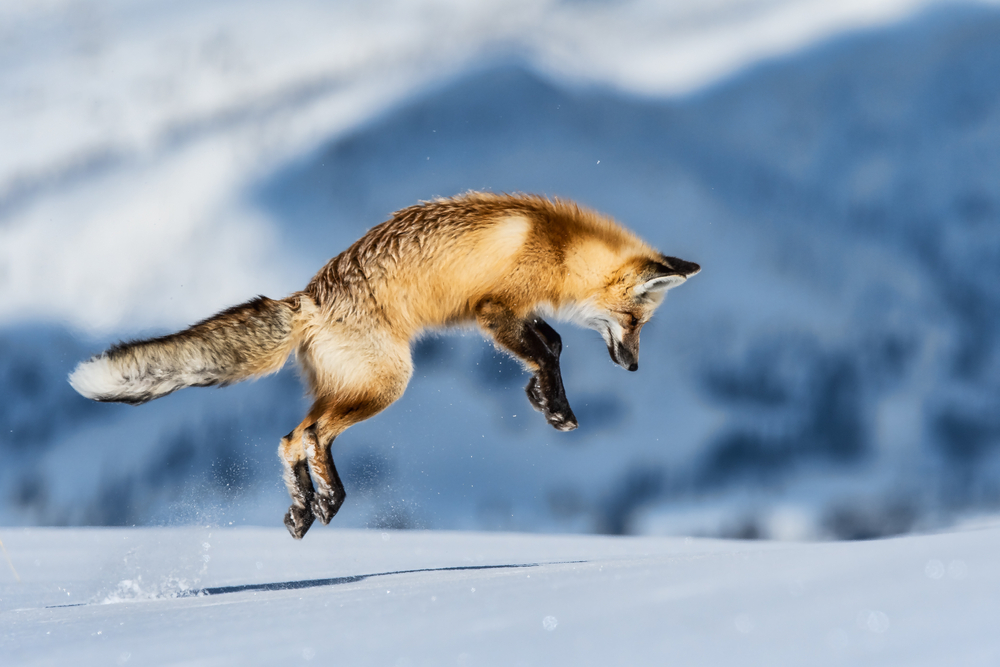 To get around and see all the life in the park, Yellowstone allows for snowmobiling, cross-country skiing, and snowshoeing. Or, if you prefer the warmth of your car, select roadways remain open and plowed throughout the winter months.

During the winter season, visitors can still see Old Faithful and the Mammoth Hot Springs, and select cafes, gift shops, restrooms, and ranger stations remain open for anyone needing assistance.

The Most Beautiful Destination in Each State 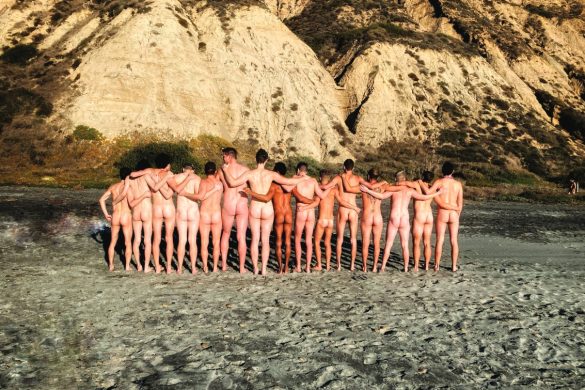 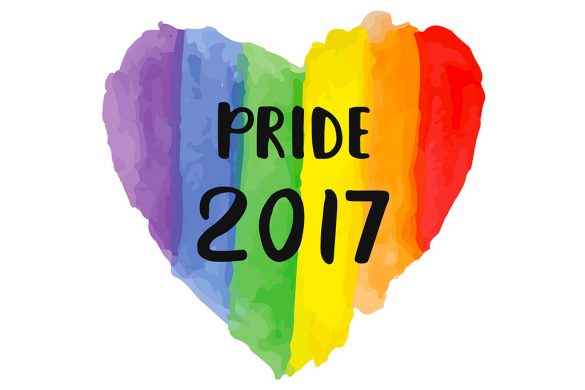