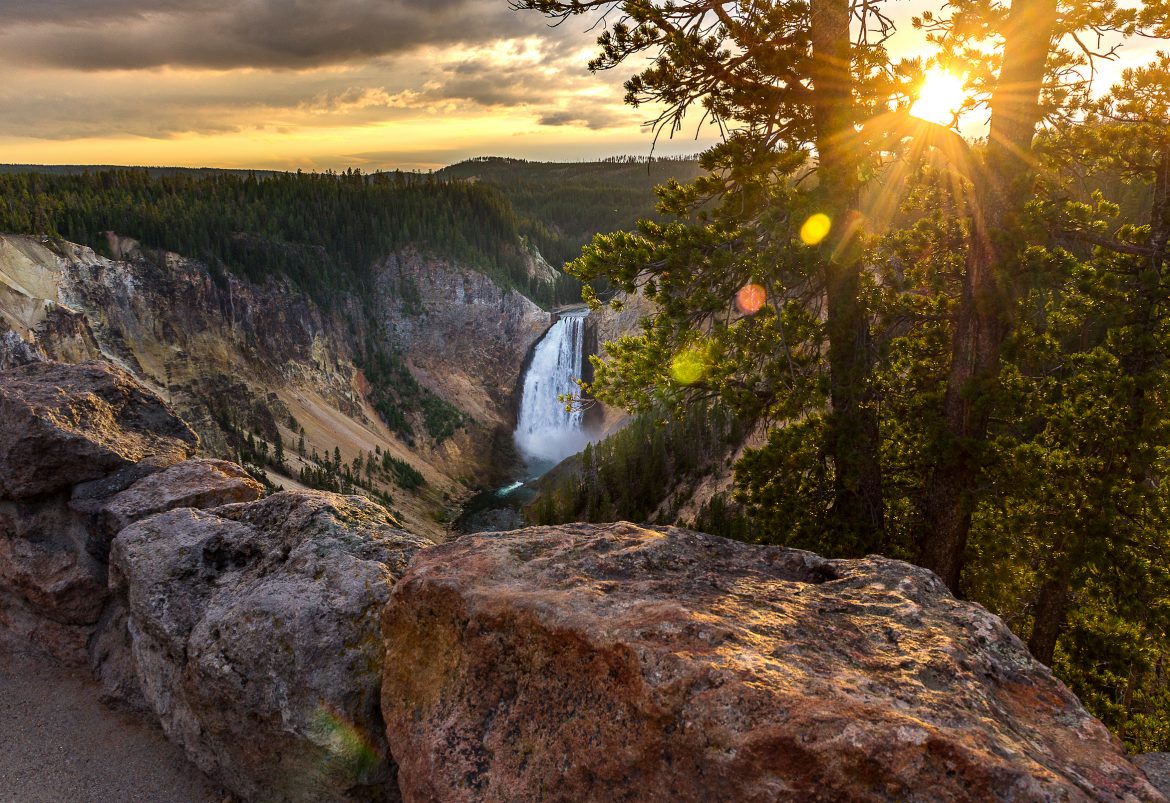 Yellowstone National Park is celebrating its 150th anniversary of being the world’s very first National Park, starting the conservation movement.

In late 1871, America’s 42nd Congress passed the Yellowstone National Park Protection Act. Going into effect the next year, the plan protected thousands of miles of land (the size of Rhode Island and Delaware combined) for the sake of wildlife and the enjoyment of nature.

The act stated, “Such regulations shall provide for the preservation, from injury or spoliation, of all timber, mineral deposits, natural curiosities, or wonders within said park, and their retention in their natural condition.”

Many might not realize it, but at the time, this was a revolutionary concept. Yellowstone became the first National Park in the world. Protecting wildlands for the sake of keeping them wild wasn’t something that happened in the 1800s. Never before had an area been deemed simply too beautiful and wondrous to destroy. 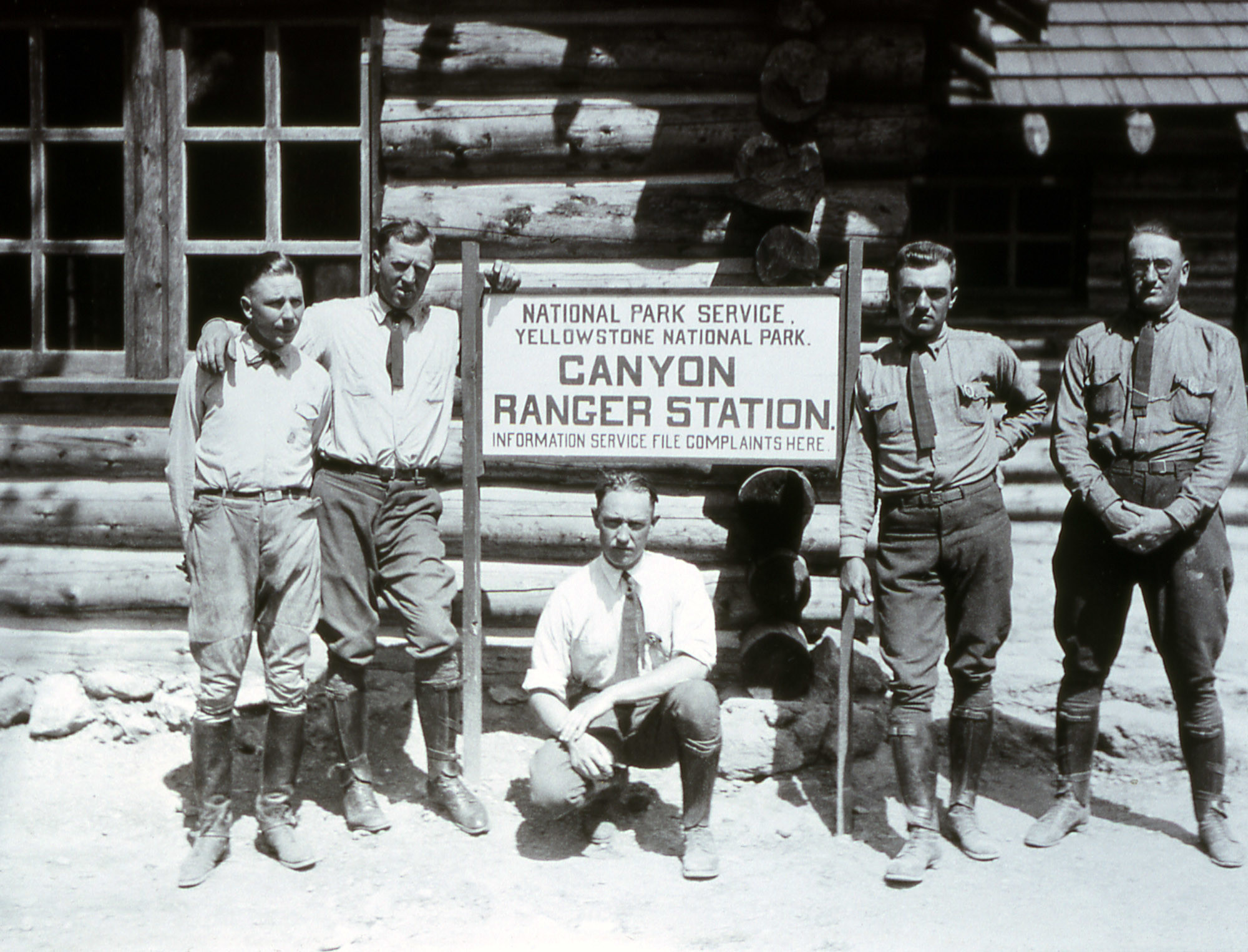 Yellowstone ranger station, circa 1922 (Image courtesy of the NPS)

However, the park had its fair share of problems throughout the years, especially right at the beginning. While speaking with Yellowstone’s superintendent, Cam Sholly, he talked about how, at the start, people tried to make Yellowstone more like the leisurely, picnic-ready city parks they were used to. This meant ridding the park of all the “dangers” and “nuisances” like bears, cougars, wolves, and bison. Before long, wolves were completely eradicated from the park, bear and cougar populations dwindled to almost nonexistent numbers, and, at one point, there were only around 25 bison left in the park. Even worse, these 25 bison were some of the last remaining bison on the entire continent. Westward expansion, along with poaching, ranching, and the forced migration of indigenous people nearly wiped the American Bison off the face of the planet. 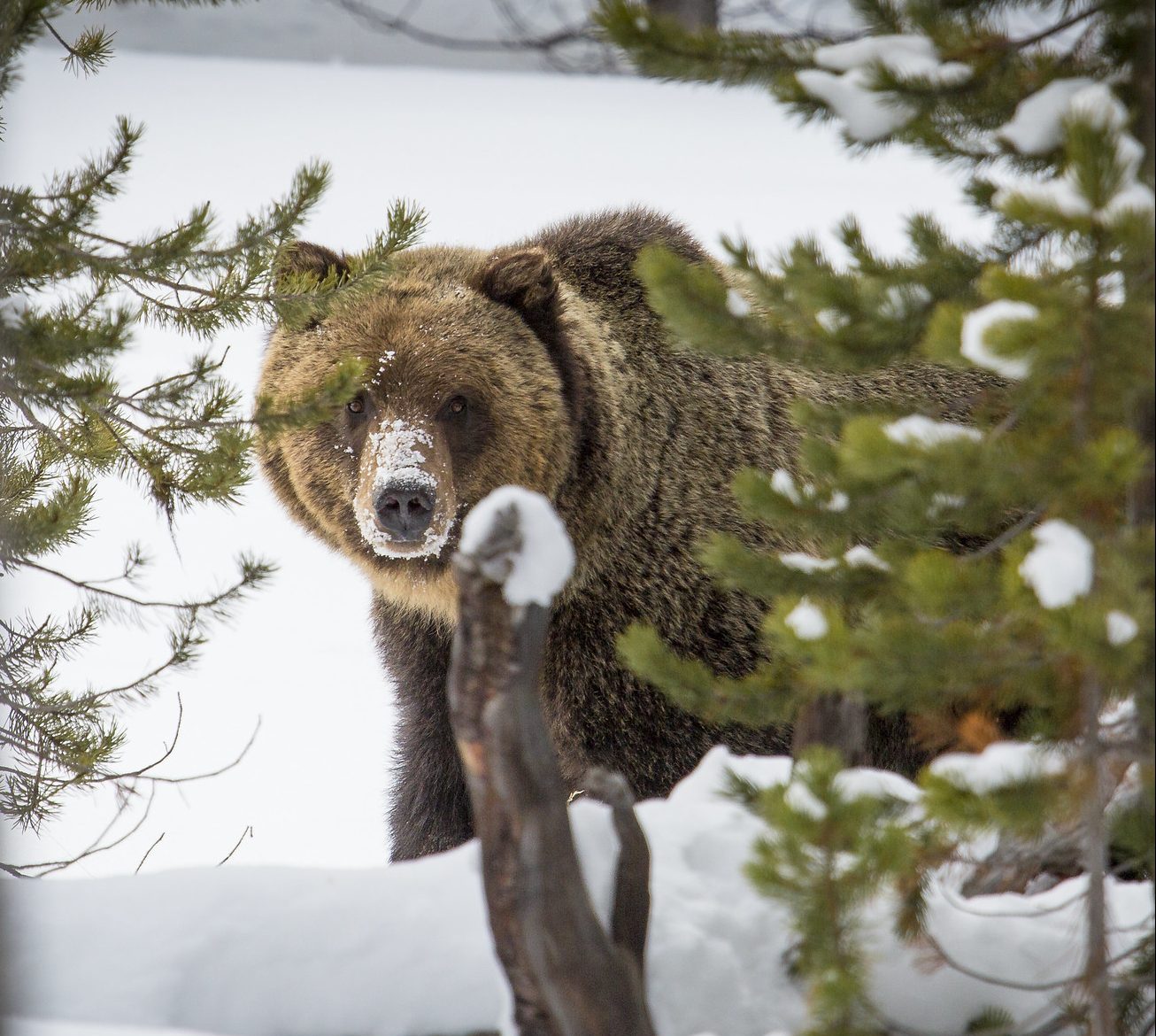 Moving into the 1900s, conservation efforts weren’t much better, Sholly stated. He spoke about how rangers used to feed bears the park’s trash in order to put on a show for visitors. However, the 60s and 70s finally brought much-needed change. Silent Spring had launched the environmental movement and the August 1967 bear attacks at Glacier National Park, which inspired Night of the Grizzlies, shed light on the conflicts that increased human presence has on National Parks, especially if bears begin associating humans with food.

Sholly said that the modern day Yellowstone began to take shape in the 1970’s. The park’s philosophy was changed and focused more on protecting nature, rather than putting on a show for visitors. Policies were put in place that forbid visitors from touching or feeding the wildlife, strict bison protection programs were enacted, and in 1995, wolves were reintroduced to Yellowstone in order to help return the park’s food web to a natural equilibrium. 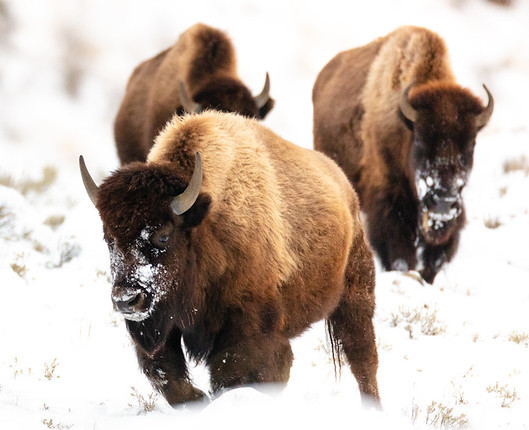 Now, over 5,000 bison roam the park, and the bear, cougar, and wolf populations are all healthy. The new danger the park worries about is climate change. Obviously, a changing climate within Yellowstone means new obstacles for plants and wildlife to contend with in order to grow and live. Another problem is the migration of invasive species into the park that have been driven there due to habitat loss and changing weather patterns. Rangers, biologists, and environmentalists will continue monitoring the park’s animals to ensure that Yellowstone remains a safe haven for its natural wonders.

For guests, the park is also making numerous eco-friendly changes. They’ve started installing solar panels to generate energy, all buildings are switching to LED lightbulbs, and the park is installing EV charging stations to help encourage Americans to make the switch to electric cars. 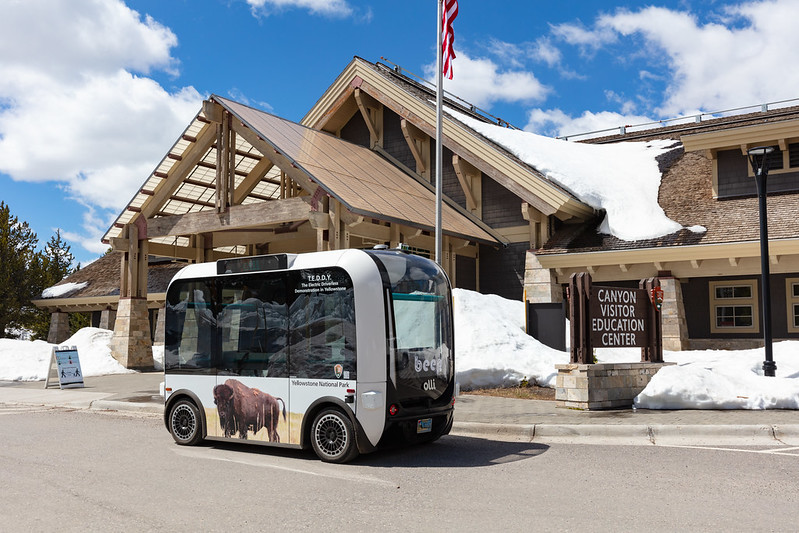 Yellowstone is also helping visitors drive less within the park thanks to the introduction of T.E.D.D.Y.: The Electric Driverless Demonstration in Yellowstone. These driverless, electric trams connect the visitor centers to the lodges and campgrounds and are being used to test the effectiveness of automated trams. The goal would be to permanently install more of these in the future, helping guests navigate the park without clogging the roadways with vehicles.

Also on tap for visitors is an increased investment in the native tribes around Yellowstone. Sadly, the park was built on land that was once inhabited. It’s important to reintegrate the story of indigenous people into the history of the park. To do this, Yellowstone has a whole slate of programming lined up including indigenous art shows, a history center, and even a pop-up camp that will allow members of the tribes to stay within Yellowstone and interact with visitors.

The park’s cultural changes are designed to create a fuller, more in-depth view of America’s history and life in the West. The environmental measures are designed to make sure Yellowstone remains at the forefront of sustainability. It’s important for the park to keep natural wonders like Old Faithful, the Grand Prismatic Spring, and Yellowstone Falls protected for generations to come. 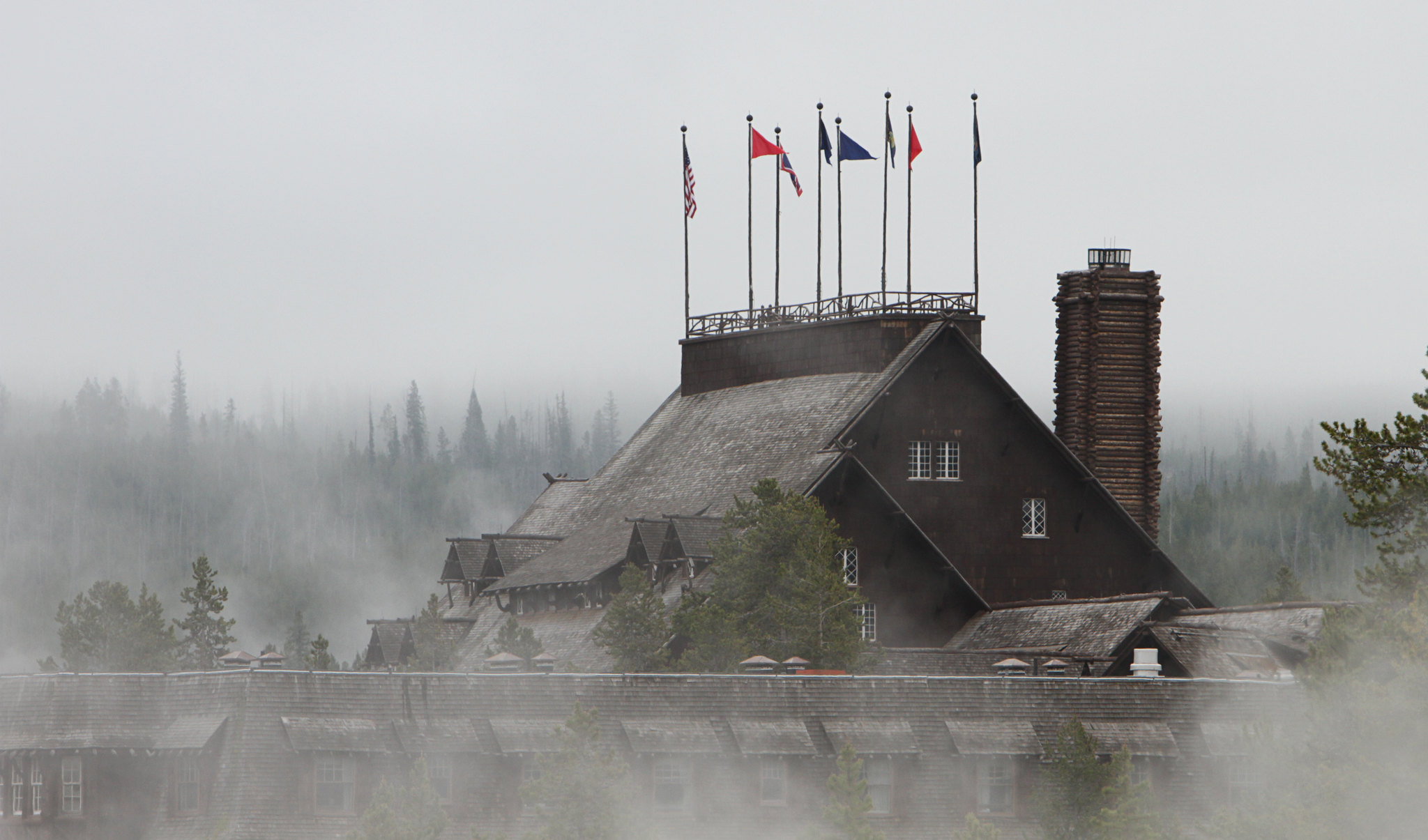 For visitors, lodging options are vast and varied. There are campsites and cabins, as well as historic lodges, such as the famous Old Faithful Inn, which was built in 1903. There are also new eco-friendly hotel options, such as the LEED-certified Canyon Lodge.

A trip to Yellowstone is a trip into history, nature, and beauty. It’s important to protect the planet so that all the wonderful adventures in the park can live on for generations to come. While there might not be high-speed internet or 5G cell service, Yellowstone offers something different. It offers a chance to unplug from technology and reconnect with friends, family, and the great outdoors.

Throughout the year, more information about special events to commemorate the park’s 150th anniversary will be added to its website. Check back regularly for updates.

5 Cities That Are Perfect For Outdoor Adventure