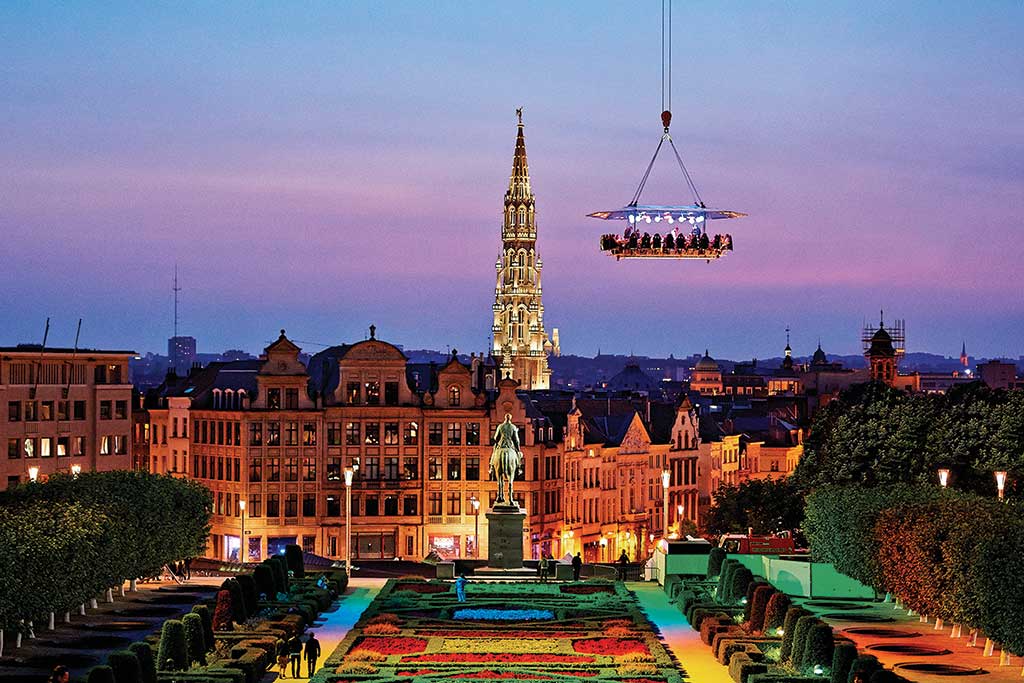 Since 2006, Brussels-based Dinner in the Sky (www.dinnerinthesky.be) has redefined “haute cuisine” by hoisting guests around the globe sky-high by crane for gourmet meals prepared by Michelin-starred chefs. With daytime and nighttime cityscapes providing the dizzying décor for giddy gastronomy, this singular adventure illustrates how reinterpreting the culinary environment can add storylines and a narrative all its own. High-altitude, high-adrenaline dining that requires a harness and a waiver may not be for everyone, but uniquely inventive restaurant and bar design is a language that comes in many forms. From the Old World to the otherworldly, here are some diverse destinations for gourmandizing travelers with a taste for discovering what’s “out there.” 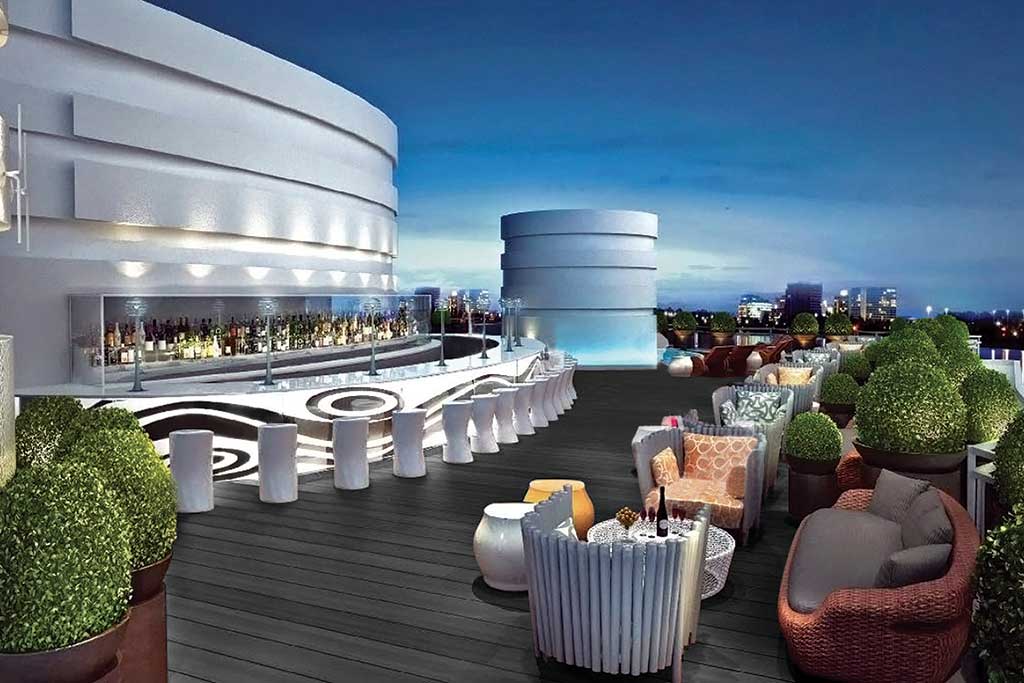 For the designers behind this fall’s hotly anticipated $125 million retro-luxe relaunch of Washington, D.C.’s Watergate Hotel (www.thewatergatehotel.com), the icon’s infamy was ready inspiration.

“We fully embrace the opportunities emanating from The Watergate’s notorious history,” says Rakel Cohen, vice president of design & development for New York-based international real estate company Euro Capital Properties, owner and developer of the property. “Hotels need to catch up to D.C.’s wonderful art and food scene, along with its developing fashion culture, and so we can be a little scandalous in offering a bold new perspective on luxury.”

Inspired by Potomac sail boats, Italian architect Luigi Moretti’s whimsical curves proved a sensation when the Watergate opened in 1967, attracting the swinging set of the times. Ron Arad, the renowned Tel Aviv-born, London-based architect and designer commissioned to execute the lobby and bar and restaurant concepts, was drawn by both Moretti and the hotel’s Nixon-era infamy.

“It is fantastic that this starting point led us to work on a project that also has such a great architectural legacy,” stated Arad in a release. “Working within such a significant period piece, you can’t ignore the context, but at the same time you don’t want to mimic it. Instead, you want to create something complementary, but most importantly, something new.”

The hotel’s Whisky Bar dramatically meets the mandate. Tucked away in the lobby, itself a curvilinear, tubular homage to Moretti in copper, brass, stainless steel and black marble, the bar’s star attraction is an undulating, spherical sculpture created from 2,500 illuminated whisky bottles. Each with a stainless steel label hand-designed by Arad, the bottles give the room a honey glow.

Here and throughout the hotel, guests can lounge on sculptural chairs, sofas and other furnishings custom designed by Arad and many manufactured by Italian furniture company Moroso. With lyrics from The Doors’ “The Alabama Song” (“Show me the way to the next whisky bar”) emblazoned in the rug, the Whisky is certain to reignite the Watergate’s go-go former days.

“This hotel has been renovated time and again, but we are the first to really embrace its beautiful curves,” explains Cohen. “Inside, there are no straight lines, which creates hidden nooks and unexpected spaces that lend to an overall feeling of intrigue and wonder about what awaits around every curve.’

Working with Arad, Cohen led the design on the casual and fine dining restaurant spaces, which continue the lobby and bar design motif with distinctive elements including eight spiral chandeliers hung from the double-height ceiling. She also created the vision for Top of the Gate, the outdoor rooftop lounge designed to maximize its 360 degree panoramas of the city and Potomac. To create a distinctive look for the hotel staff, including bartenders, servers, and banquet team, Cohen turned to costume designer Janie Bryant, celebrated for her work on TV’s Mad Men and other shows.

“My goal was to create an evocative collection that complements the bold, mid-century modern design and mystique of the Watergate Hotel,” says Bryant, who won an Emmy for her costumes on HBO’s Deadwood. “Inspired by vintage photos of the hotel and applying my expertise for creating clothing that depicts the era, my sophisticated, retro-look uniforms bring the Watergate’s heyday back to life.”

“We want to transport our guests to the time when travel was an occasion worth celebrating,” says Cohen, adding that, “we know everybody will be talking about the Watergate Hotel.” 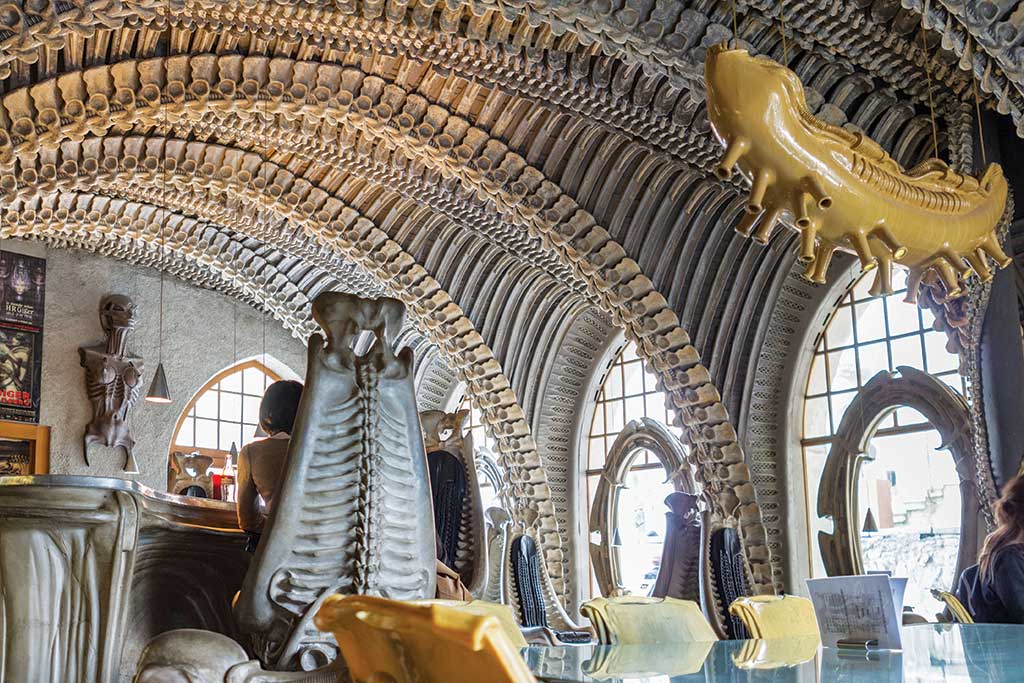 OUT OF THIS WORLD

In the late 1980’s, Swiss surrealist H. R. Giger created the first HR Giger Bar (www.gigerbar.com), modeled after his Oscar-winning biomechanical environments and characters for the Alien movies. While that original Tokyo haunt is no more, his two Swiss locations remain beguiling watering holes to this day.

Giger, who passed away in 2014, loved New York City and planned his second bar there, but budgetary constraints saw him choose his hometown of Chur instead. Opened in 1992, this glass-walled Giger Bar’s futuristic decor includes Giger’s ribbed, pod-like “Harkonnen” chairs (the “capo” versions topped with skulls), adapted from designs for an unrealized 1975 film version of Dune.

Afterwards, he designed the VIP Lounge (1998 to 2002) for the former sin temple Limelight, followed in 2003 by his triumphant (and personal favorite) in Château St. Germain, a picturesque mountain village in Switzerland’s Gruyères region.

Crafted inside a 300-plus year old castle adjoining the H.R. Giger Museum, the chambered space instantly evokes 1979’s Alien, with every design element, from the arching ribs and vertebrae of the walls and ceiling to the floors, fittings, and furniture, rendered to haunting effect. As Giger intended, this is the womb of the mythical alien queen. Especially enamored of the experience was Portland, Oregon-based real estate developer Andy Davies. “Like entering the belly of the best, it was, in the true sense of the word, awesome,” recalls Davies of first visiting the Gruyères bar in 2005. “You’re enveloped in a place closest to the mind and heart of the artist, taking you inside and completing the circle of experiencing his work.”

Based on an “architectural and stylistic celebration of science fiction,” Davies is advancing his own “out-of-this-world’ project, the Sci-Fi Hotel (www.scifihotel.com).

After meeting with H.R. Giger shortly before the artist’s untimely death last year, Davies announced plans to create new Giger Bars within the properties. “Standalone venues are an option as well,” says Davies. “New York, Seattle, London and Dubai are among the strong contenders as I seek the right investors and development partners,” he says. “True to Giger’s spirit, the next bar will be an original work of art—with an awesome opening party.” 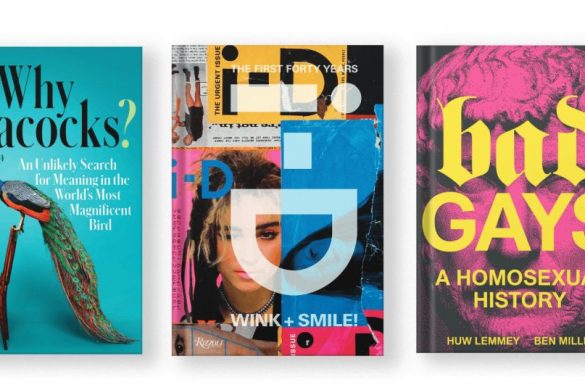