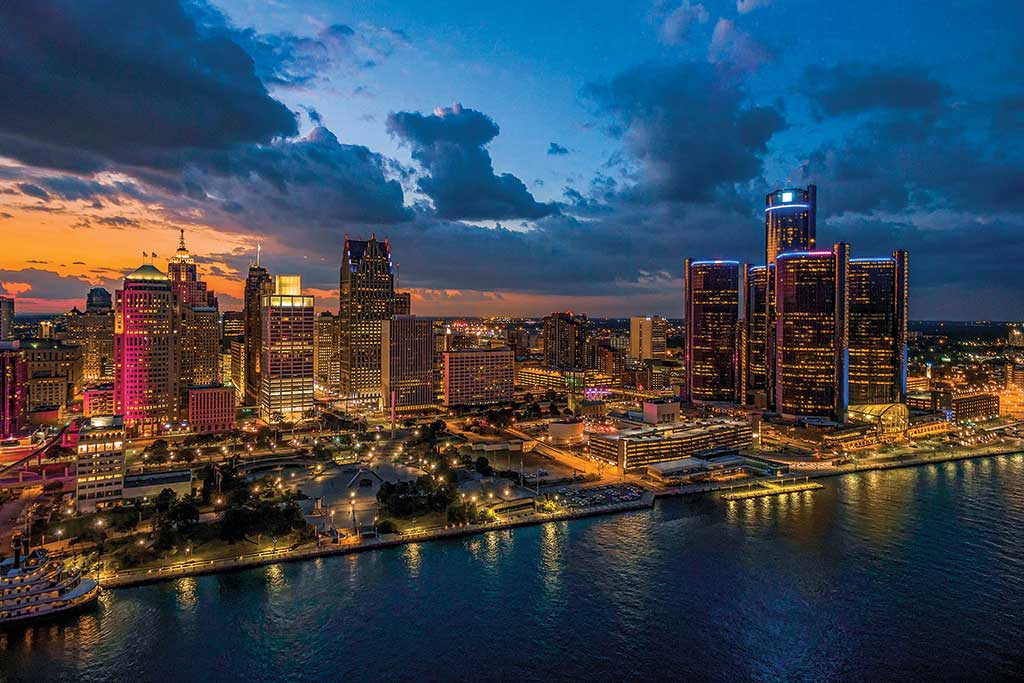 From the urban decay sprouted entrepreneurial endeavors from people from all walks of life hoping to live out their dreams. Following the trailblazers, businesses once again began investing in Detroit, bringing a new sense of pride into the city.

You know how to pick collard greens, right?” a project leader asks me. “Sure I do,” I lie and walk off with rubber bands, gloves, and a sun hat. Passing berries, carrots, radishes, and herbs that fill the land with English-garden prosperity. School children are also here taking a tour of the farm, learning about the various foods grown here.

“This area of the city has always been a food desert,” a volunteer explains to me. “Since the recession, lots of markets closed, but now we’re seeing more investments into the community. From local providers who fill up the Eastern Market to companies like Whole Foods opening up their first store here, we’re finally back on the map with fresh foods,” she says throwing away a too-small radish. “We have to continue to invest in our children, showing them how to eat. Some of the kids here don’t even know where carrots come from,” she says in disbelief. 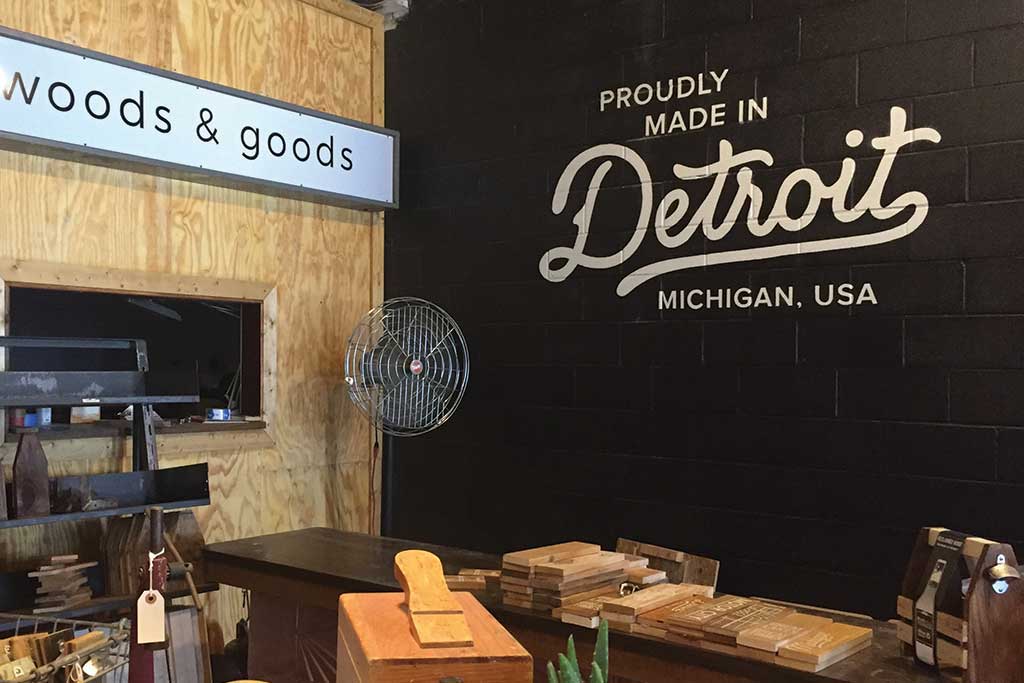 The August sun beats down on the workers, who try to minimize their time out in the field by hurrying to collect the correct amount of bushels, pounds, and yields of various produce to be sold at Sunday’s farmers’ market. I wait anxiously with bunches of collards for an inspection by the head gardener. Eyeing the little bug holes in the giant leaves. Nervously I hand over my basket. “You’re a regular-old gardener aren’t you? What beautiful leaves we have to sell,” she says holding up my crate to show it off to the rest of the volunteers. Bashfully I walk away with a job well done. “Honey, do you think the collard greens are going to clean themselves?” she rhetorically asks and hands me the hose.

We load up a van with a fantastic bounty and rest over some fresh lemonade. If it weren’t for the sound of traffic whizzing by on the other side of the chainmail fence, you’d never know that this working garden was in Downtown Detroit.

Before I leave my morning volunteering at Keep Growing Detroit, I take another walk around the 1.75-acre farm. A diverse group digs into the soil, old and young, of all creeds, is working the land in the shadows of cranes that dominate the skyline of a revitalizing downtown. It’s a scene that sticks with me and shows me that Detroit’s future and its regrowth is in good hands.

It’s not news to anyone that Detroit took the brunt of the horrible recession that began in 2008, but the city had already been trying to dig itself out of economic turmoil since the 1970s. As manufacturers left the area for cheaper labor, so did the jobs, and the middle class that once proudly solidified the backbone of what was once the fourth-largest city in America. The city was left in financial and structural ruins. Stately houses, the pride of the Midwest, filled with Pewabic pottery and elegant tile work, were left in decay, as were the theaters, art deco offices, and the roadways that once wheeled out Ford’s Model Ts, all became a sad reflection of this once great city. Things began turning around after the city became the first in the country to ever file for bankruptcy, and a bailout to GM and Chrysler gave them the chance for a fresh start. 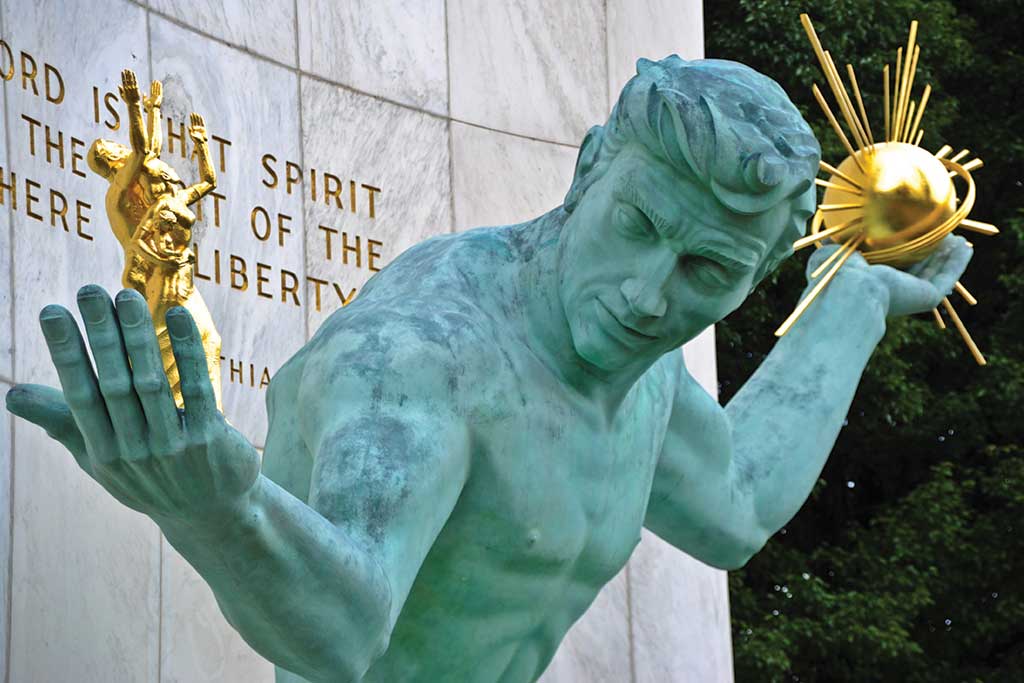 As property values fell to all-time lows (mansions were selling for mere thousands), soon seeds of revitalization began to be planted. From the urban decay sprouted entrepreneurial endeavors from people from all walks of life hoping to live out their dreams. Following the trailblazers, businesses once again began investing in Detroit, bringing a new sense of pride into the city.

LGBT businesses have particularly been at the forefront of Detroit’s renaissance. “I believe Detroiters from all walks of life have contributed to the resurgence of the city, especially the LGBT community,” Kevin Terrell Heard, president board of directors of the Detroit Regional LGBT Chamber of Commerce, tells me over Spanish tapas at gay-owned La Feria. “With the growing number of queer people moving into the city, and the wonderful, inclusive environment my generation (Millennials) creates, we have created and maintained the rich culture of Detroit. La Feria’s owner and manager Elias Khalil agrees, and is a prime example of a resident’s passion to build on the city’s history and offer unique experiences for a new generation of Detroiters.

“I walked past this building hundreds of times,” he says over sangria at his restaurant in Midtown in an area called the Cass Corridor (most famous for its Dally in the Ally festival and place in music history). When he found out the building was for sale, he didn’t automatically jump on the fixer-upper project (it also wasn’t his dream to open up a restaurant until one rowdy wine-filled night with friends when the idea was tossed around). “It was a disaster when we first got here,” he says. “The outside was just hideous.” But he saw the potential in the “restaurant.” After all, he quite literally wrote the book on Cass Corridor architecture (Detroit’s Cass Corridor). After months of work (a lot of details being hand done), Detroit’s first tapas bar opened. 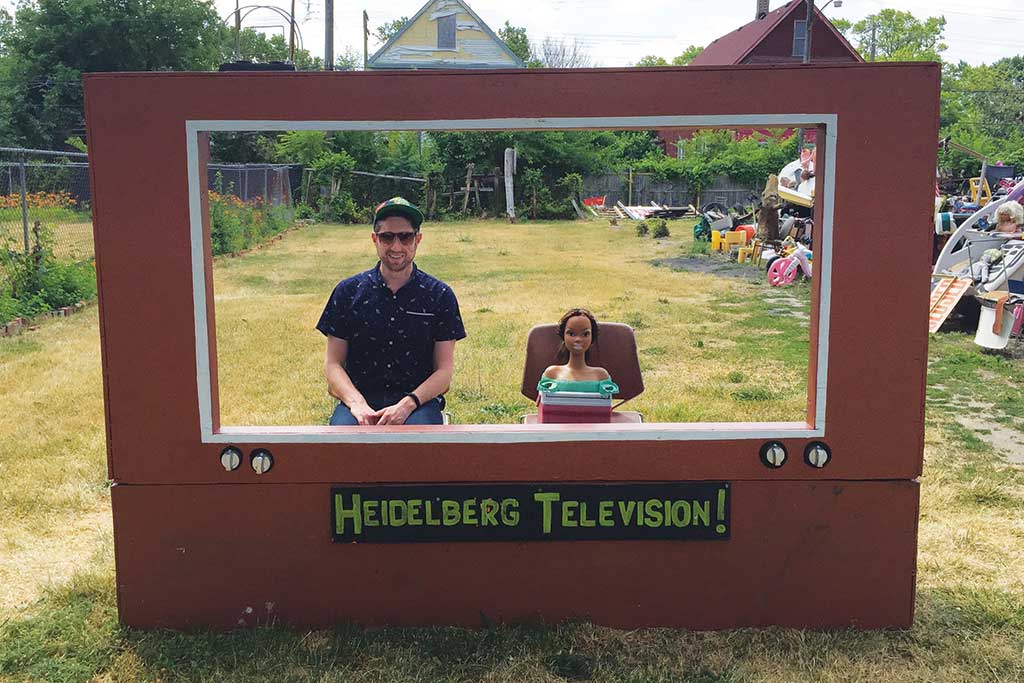 As we sit over an endless assortment of gorgeous food, Heard tells us about the newly created Detroit Regional LGBT Chamber of Commerce and some the advantages of that alliance. “One of the biggest benefits…is we are the resource for everything LGBT and business. We keep up on the latest LGBT marketing research. We take that data and use it locally in order to benefit LGBT business owner and other organizations who support our community. We create strong connections with corporations and we partner with our LGBT businesses,” he says. The alliance has done a lot more than just bring gay-owned businesses together. In the state of Michigan there are no LGBT workplace protections, therefore we use our leverage and the buying power of the LGBT community in Detroit to ensure companies understand that our community will only support those companies that support us. That is why our workforce and business owners are so diverse and inclusive.” When asked if there were a lot of members, the two laugh and say, that I could literally go outside and pop in next-door, and he’s a member.

The next day, I rent a car to further explore Detroit’s revitalization. I pick up a brand-new Chevy Trax (an easy-to-drive crossover SUV). It’s easy to navigate the wide avenues of Motor City, despite the seemingly endless construction going on (a good sign!). Midtown’s largest project is the $732.6 million (though more is expected to be spent) Little Caesars Arena that’s set to be an economic boom for the surrounding area that is already chockablock with sports bars, restaurants and is home to the world-famous 1920’s Fox Theater.

I swing my car around the sky-high construction cranes and arrive at the Aloft Detroit at The David Whitney, a perfect example of reclaiming Detroit’s glory days. The neo-Renaissance building is considered to be one of the very first mixed-use projects in the city and housed offices and a grand mall, but it sat in disrepair for many years before receiving an over $90 million refresh thanks to a partnership with Starwood. The result is a hotel with an opulent high-ceilinged lobby that commands reverence to the architects; modern, Millennial-friendly guest rooms; too-good-to-be true staff (especially the valet); and a primo location for adventures (the second floor has Detroit’s People Mover station to get to main attractions). 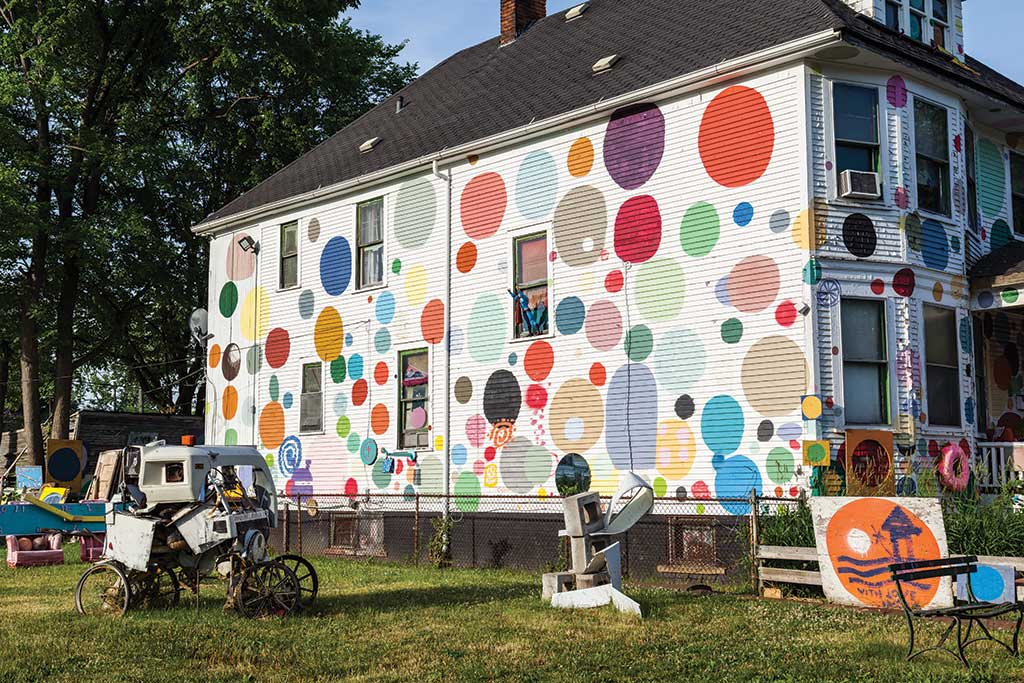 Passing small boutiques, I ramble down tree-lined streets to an unexpected breakfast at Sister Pie, a bakery that occupies a storefront corner in an area known as the West Village. Owner Lisa Ludwinski opened the pie bar two years ago, and she completely transformed the inside into an oldtimey, down-home-comfort place to pick up a book, some seasonal pie and cookies, and your own mug from the multifariously filled china cabinet. “Sister Pie” mug in hand, I’m wheedled into trying the local blueberry pie with fresh whipped cream. The communal table is packed with locals having morning pie, and I find a sun-drenched corner and indulge in the treat’s richness. Before I go, the baker hands me a bag of their famous cookies. Yes, the buckwheat chocolate chip is worth the calories.

Then, I walk to a neighborhood known as Indian Village, and I’m floored by its opulence and beauty. A miscellany of styles coexists: Tudor, Gothic Revival, beaux arts, baroque, and Federal all make for a worthwhile afternoon of exploration. The area is worthy of a tour with an expert (check Historic Indian Village for tour dates at www.historicindianvillage.org). I find out a lot more about this affluent community at Pewabic Pottery. This ceramic studio and school has beginnings in the city since 1903. Inside this Tudor-revival building (a National Historic Landmark), the world-famous Pewabic Pottery took its form and impacted the Arts and Crafts Movement. Louis, who does their marketing, shows me around the building and describes the process of creating tiles, bowls, cups, etc, and how they finish them with the iconic iridescent glaze. 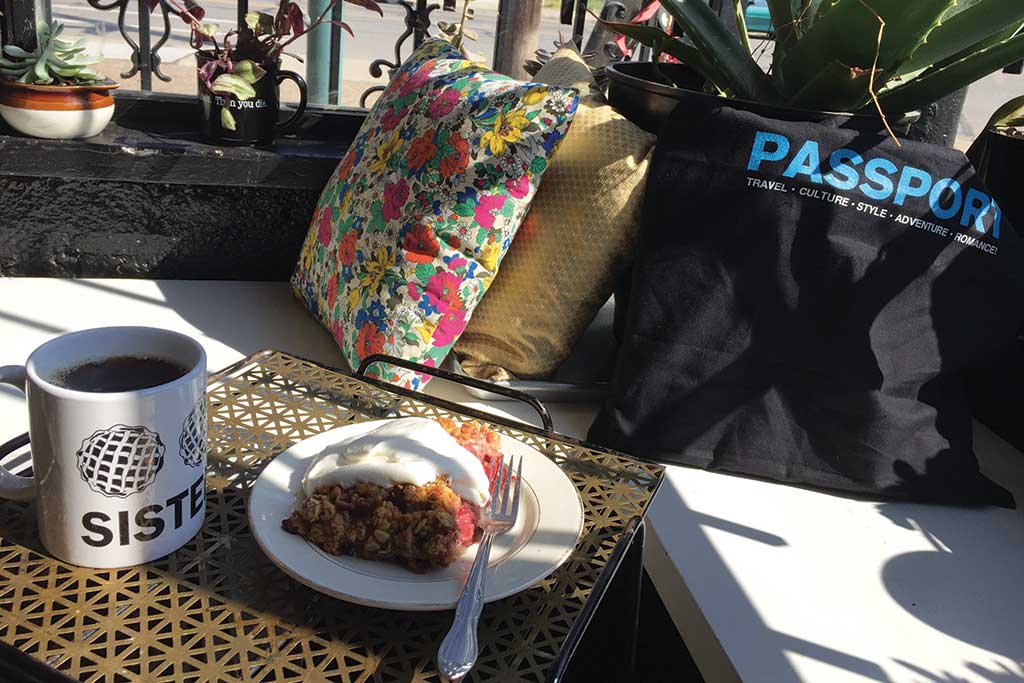 As money comes back to the city and a revival of the Detroit of yesteryear begins, renovations of some of the grand dame houses have involved extensive cooperation with the Pewabic school. Louis shows me the massive undertakings that he and his coworkers have worked on: tiled gardens, fountains, and replacements of entire building façades.

With a few ceramic beer mugs in tow from the Pewabic store, I visit the Detroit Institute of Art (you’ll find plenty of Pewabic embellishments throughout). It’s hard to imagine walking through this world-class museum without thinking that its whopping globe spanning collection was at risk for being put up for auction in order to pay off the city’s debts. This is because the Detroit Institute of Art became a municipal property way back in 1919. But thanks to foundations, private donors, and the State of Michigan, $800 million was raised, and the museum was saved in a last-minute deal referred to as the Grand Bargain. 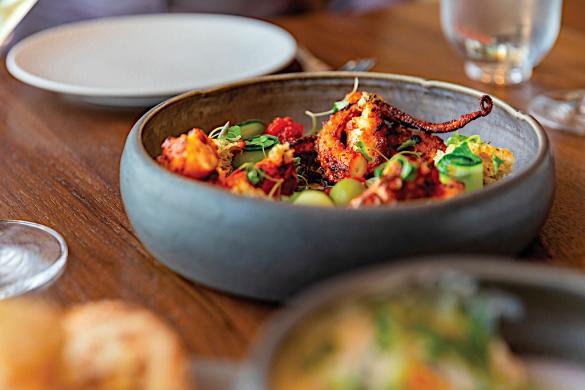 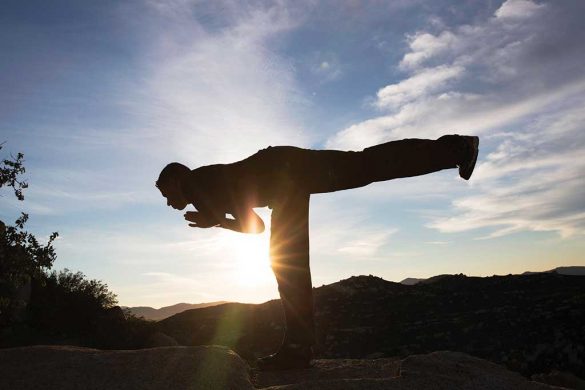 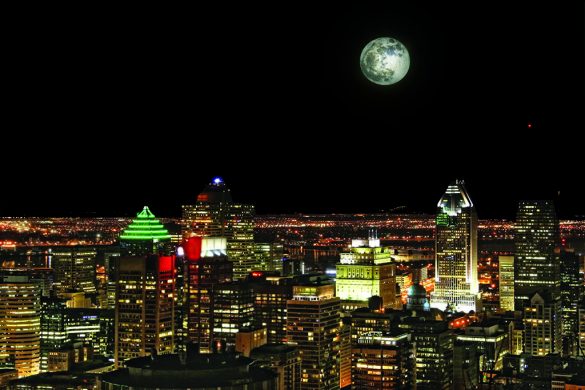