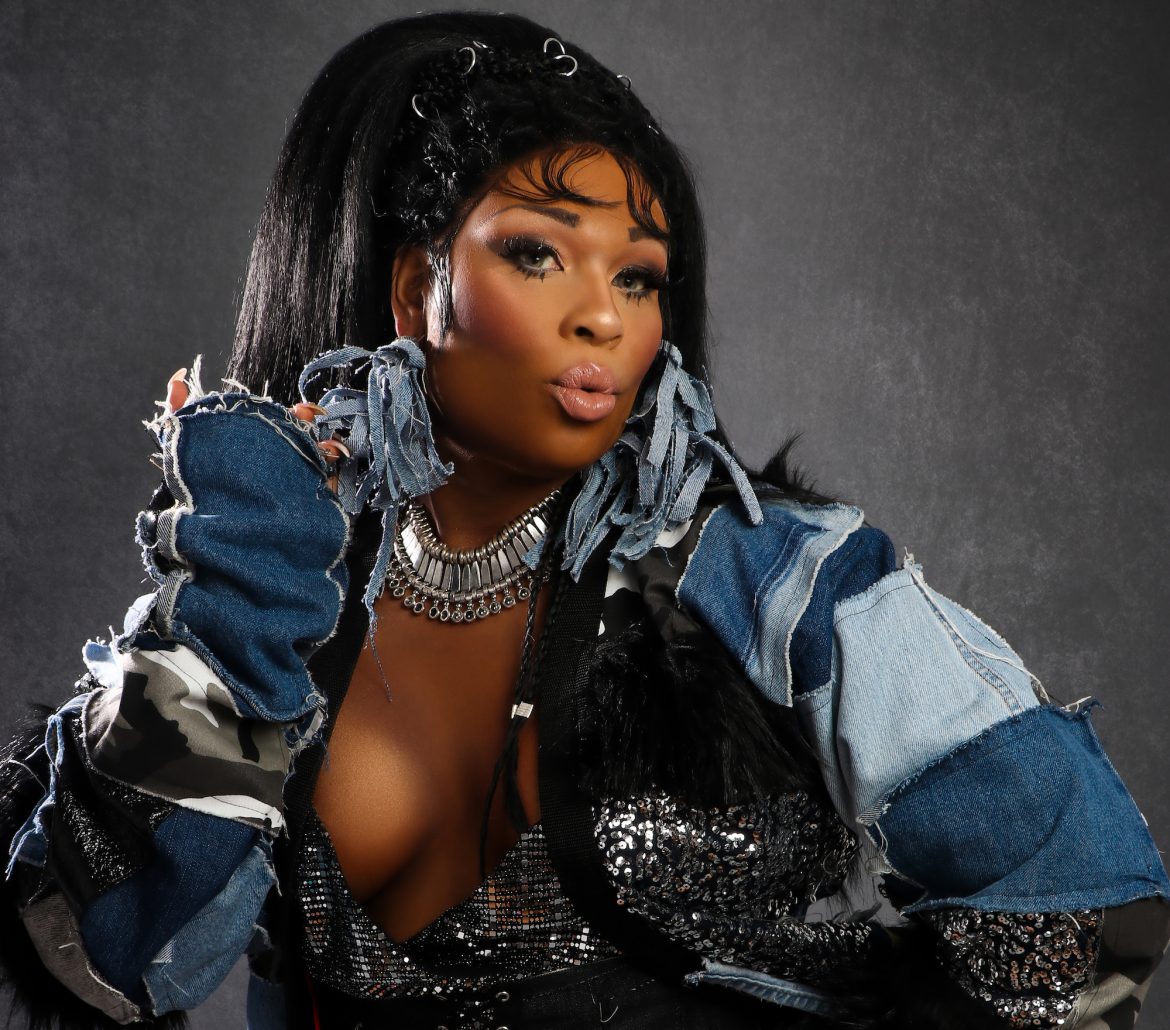 My first time working with the ACLU was when they invited me to sit in on the Supreme Court during their deliberations on issues involving Title VII, which protects employees from workplace harassment based on things like race and gender. — Peppermint

Peppermint shot to fame after becoming the runner-up on the ninth season of RuPaul’s Drag Race. From there, she starred in the Go-Go’s inspired musical, Head Over Heels, becoming the first trans person to originate a role on Broadway. She’s been using her career and fame to raise awareness of the struggles faced by trans people, the broader LGBTQ community, and people of color.

Now, she’s been named an official ambassador of the ACLU and is determined to help them fight for justice and equality. First up on Peppermint’s agenda will be hosting the ACLU’s Sing Out for Freedom concert on November 22nd, which will celebrate diversity on Broadway and raise money for the organization. Passport caught up with Peppermint to discuss her new role, as well as the recent wave of anti-trans bills being introduced in states across the country.

To start, you’ve recently been named an ambassador to the ACLU, can you tell me a little bit about that?

The ACLU is a leading organization that helps fight for better rights, especially for marginalized communities. They’re incredibly helpful for any issues that involve law or policy. My first time working with the ACLU was when they invited me to sit in on the Supreme Court during their deliberations on issues involving Title VII, which protects employees from workplace harassment based on things like race and gender. After that, we continued doing projects together and the relationship between us was just great. 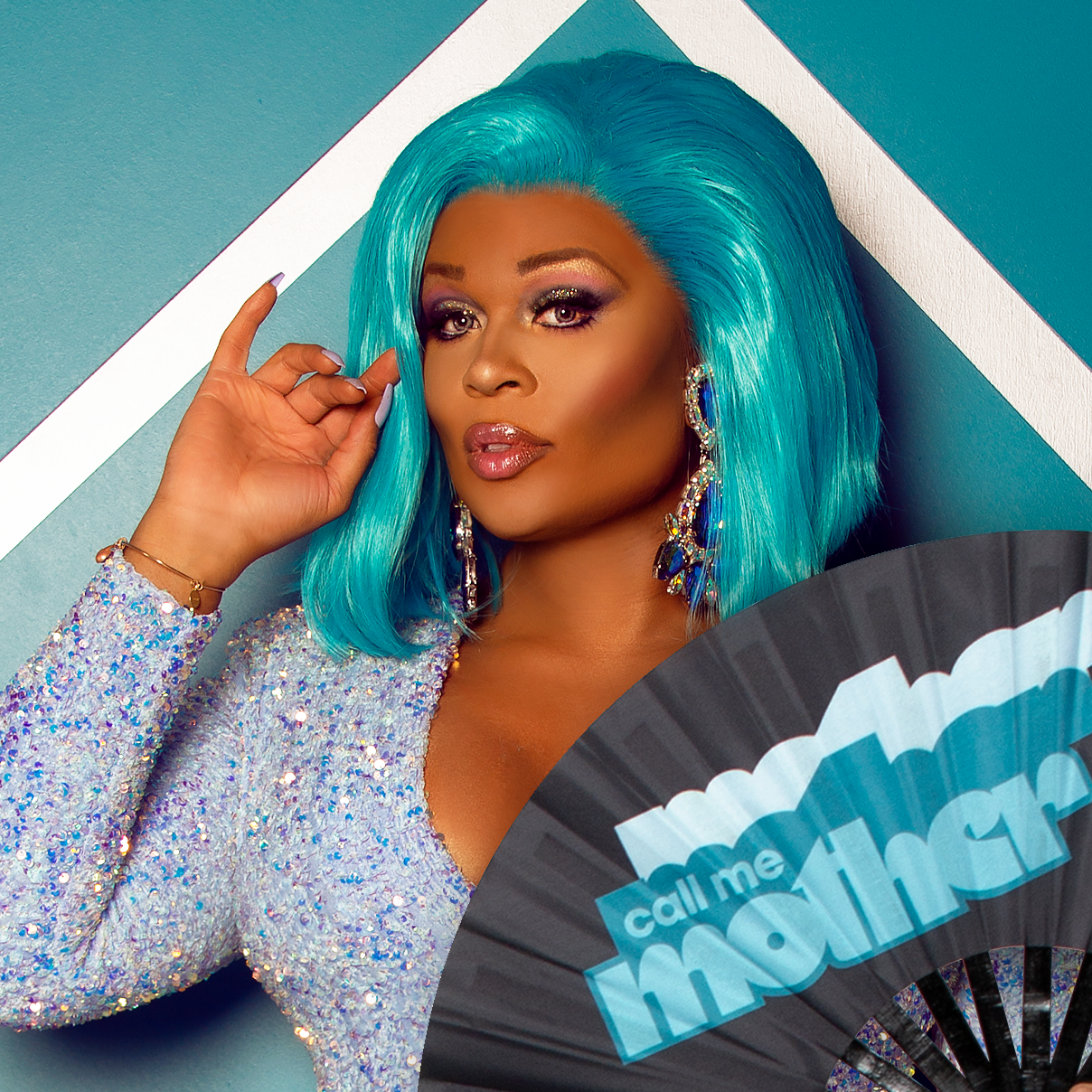 As an official ambassador, what kind of things will you be doing?

Right now, it’s a title that solidifies my participation in the conversation about civil rights and working with leaders from the ACLU to help give my input about issues, especially those that impact the trans community. I’m doing a lot of outreach work on social media by spreading the word and putting out calls to action.

Also, now that the world is opening up from the pandemic, I’ll be doing events with the ACLU. First up, I’ll be hosting the Sing Out for Freedom concert, which is being put on by the ACLU and NYCLU on November 22nd. It’s going to be an amazing night of music, liberation, and diversity, so I can’t wait to be a part of it!

Right now there seems to be this giant wave of anti-trans laws going into effect. Starting back in January, a sort of fearmongering developed to make others afraid of trans people by using school sports. The claim from conservatives is that trans women and girls playing on girls’ sports teams is inherently unfair and harmful to girls because, I guess in their minds, trans women are actually men trying to beat girls at sports? What are your thoughts on this new wave of hatred against trans people?

Yes, well, we need to start with this: People fear what is unknown. And unfortunately, with LGBTQ people, and trans people especially, being minority communities in many populations across the globe makes it easy for people to spread inaccuracies about us. They use the fact that people don’t know much about the transgender community to their advantage. There was even a GLAAD report that stated up to 80% of Americans said they’ve never known or met someone who is transgender. I mean, there’s a higher percentage of people who report that they’ve seen a ghost! And when that’s the case, it becomes really easy for others to tell our story for us. Unfortunately, people use this to say that trans people are predators, or that we’re trying to harm people in locker rooms…even though none of it is true. 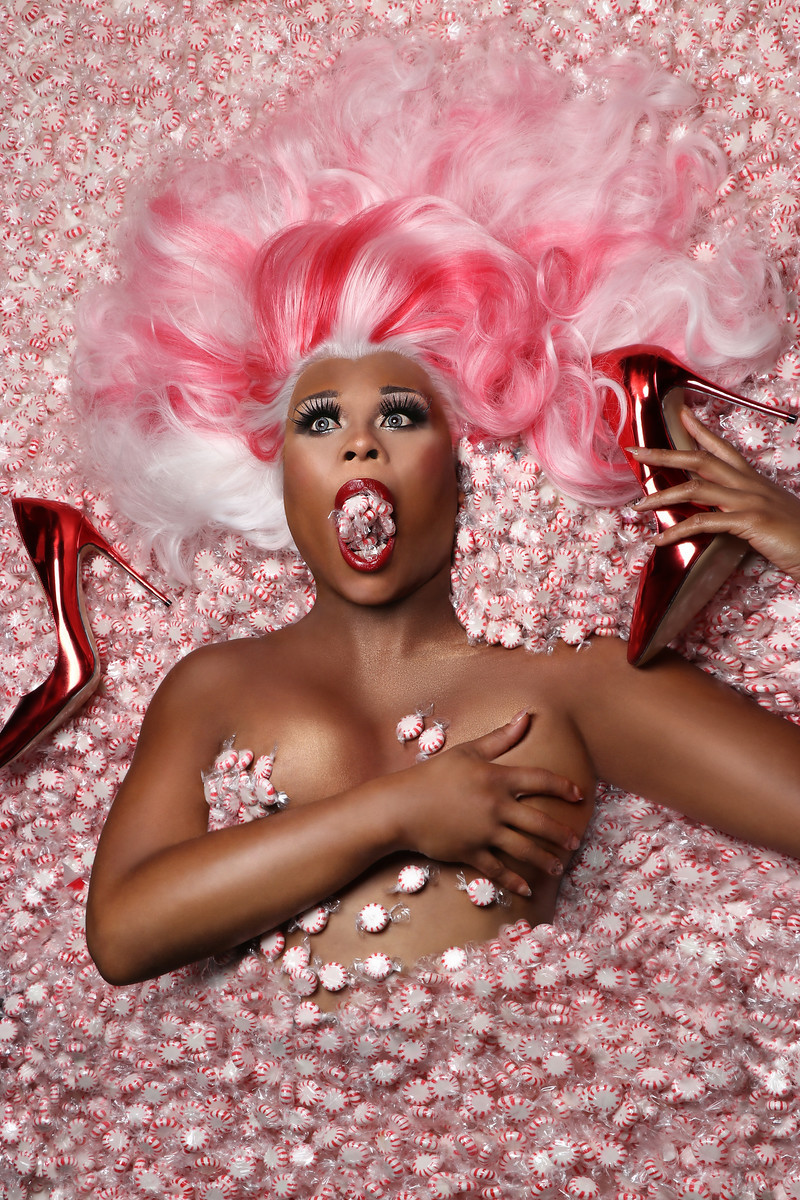 Peppermint is surrounded by, what else, peppermints! (Photo: James Michael Avance)

But, sadly, this is nothing new. This is the same playbook being used on a new target. These same kinds of tactics were once used to make people afraid of gay folks, and before that, black and brown people. We continue to see this same rhetoric: It’s always that they’re after women and/or children, that they’re coming to get you, and they’re trying to commit crimes against you.

What we’re seeing in 2021 is that, since Democrats won the three branches in the 2020 election, Republicans have had to move to the state level, and are now going from state to state, basically saying the same tired old falsehoods about the trans community and using that to stoke their base, rally support, and make people feel like they have an enemy. Because they’re most successful when their voters feel like they have a common enemy.

And it’s important to look at conservatives’ failures too, because it’s important to know how we got here. They used to say that allowing gay marriage was going to end society and that America would descend into chaos—did that happen? Then they said that trans people using bathrooms was going to result in rapes and assault—did that happen? So, now they’re turning to pseudoscience to try and make their point to prey on the misinformation and false beliefs that people already have. For example, they say that if someone is assigned male at birth, they will always inherently be stronger, bigger, and faster than any girl can be.

The sad irony of all this is that these laws are always said to “protect women”, but they’re actually going to hurt women. Just imagine, if you get everyone stoked up in fear, and everyone suspiciously looks at any woman who is 6-feet-tall, or who has a deep voice, eventually, they’re going to come across a cisgender woman who has a deep voice or who is tall. And then what? What kind of disrespect and harassment will she have to go through?

How is the trans community handling all of this? I can’t even imagine how it must feel to be trans right now and have to deal with all this targeted hatred. Is there anything we can do to help?

Well, the good news is that we have organizations like the ACLU who are following all this legislation and who are dedicated to fighting these rulings as best they can.

As far as the average person goes, we need to change the rhetoric in this country. We need to spread the truth to help fight the lies. We need to erase the fear that people have of the trans community.

I think one of the best things allies can do is educate themselves on what the trans community is going through to help better understand the struggles we’re currently facing. I also think it’s important to not be afraid of trans people and to give them a chance and invite them into your everyday life. Like, are you hiring someone? Well, don’t be afraid to hire a trans person. It’s a great way to create new spaces where people can interact with a trans person in a positive way. Like I said at the start, 80% of people say they’ve never even met a trans person before. Let’s change that! Let us partake in the world, let us be members of the community, don’t relegate us to the shadows. If we’re not involved in people’s lives, it’s easy for people to not relate to us, and if people can’t relate to us, it makes discrimination easier. 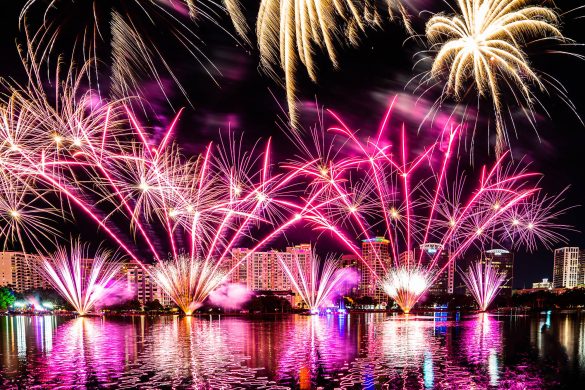 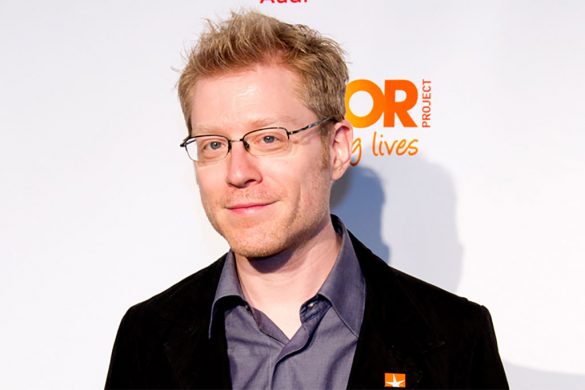 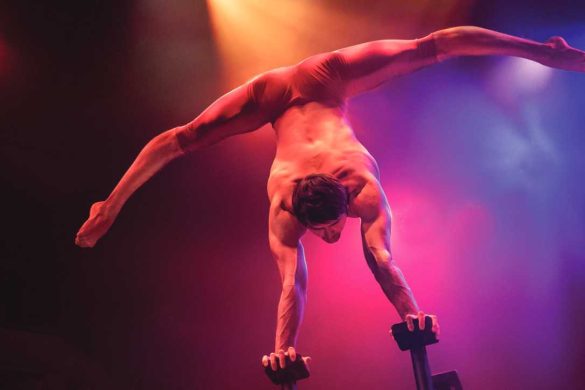 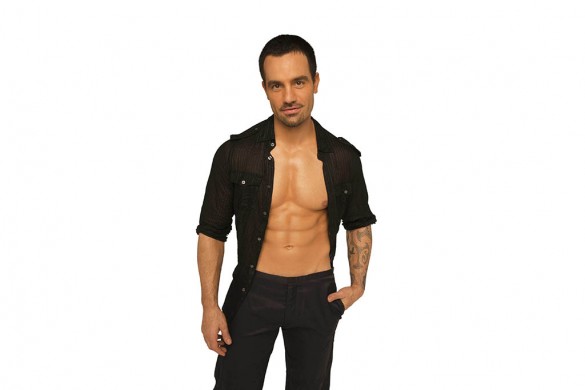 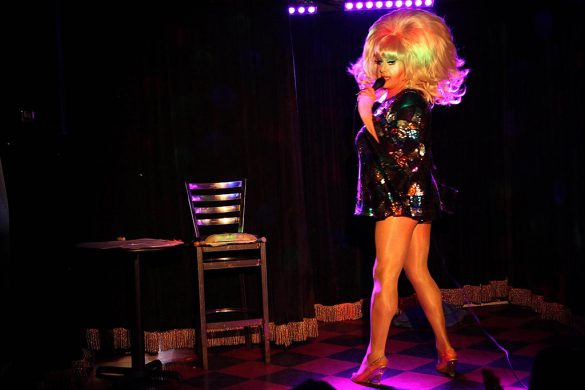 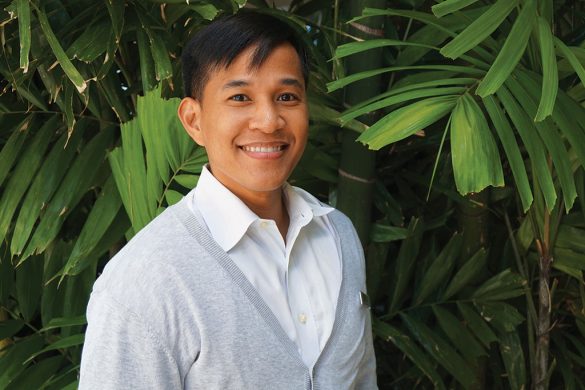