Top Posts
ESCAPE PLAN: Austin, Texas
Wilson Cruz and Other Celebrities Speak Out for...
Decorate Like A Designer With Jonathan Adler
Future Perfect Project Giving Free Concert at Lincoln...
Pack Your Bags and Prepare to Celebrate Pride...
Visit Lauderdale Launches New Campaign to Show the...
Tom Prior: The Star of the Gay Biopic...
8 Awesome Things to Do in Canada’s Banff...
Earth Day: 5 Countries Going Green and How...
Experience The Lexus International Gay Polo Tournament
Home Our Voices • Our Lives PASSPORT PROFILE: Douglas Stuart the Author of Shuggie Bain 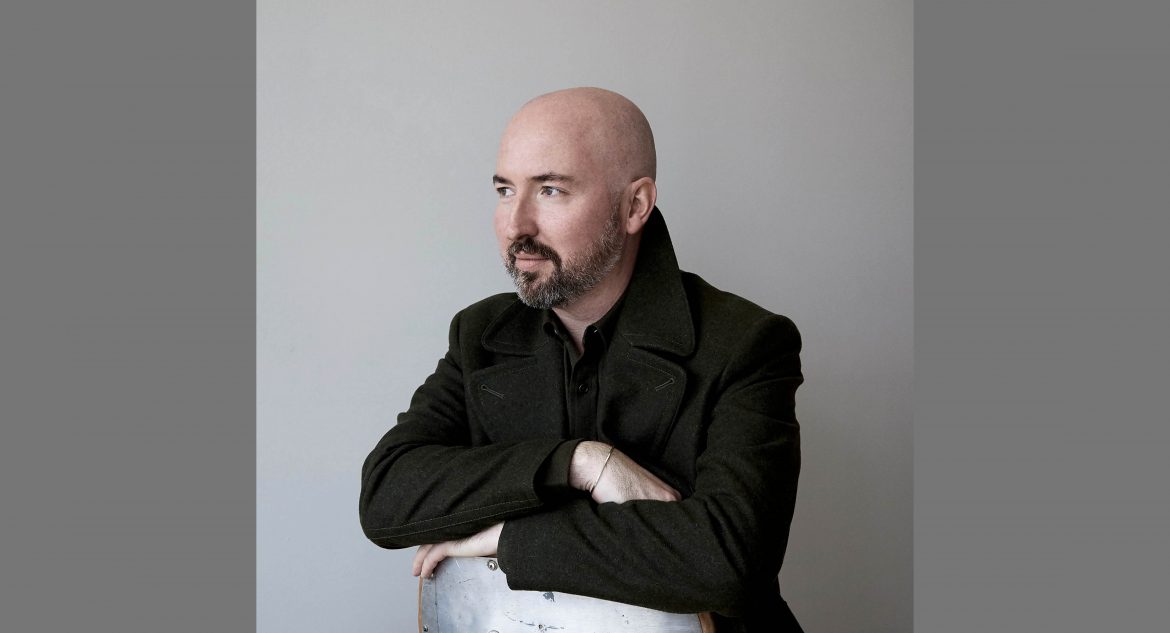 Douglas Stuart was among five finalists for the U.S. National Book Award and he won the UK Man Booker prize. Now, SHUGGIE BAIN is an international success and its author has won wide critical acclaim.

SHUGGIE BAIN may sound like the name of a drink in a dive bar, but it’s actually the title of Douglas Stuart’s new blockbuster best-seller, soon to be streaming as a TV series. It’s  , the wrenching struggle of a son trying to save his single mother from alcoholism. She’s all glamour, sparkle, and struggle, and her younger son’s love drives the emotional core of the plot. Inspired by his own life, it is both riveting and heartbreaking. Stuart, 44 now, admits sometimes crying while he was writing it.

Predictably, growing up in an impoverished neighborhood meant he himself was bullied and tormented, but “I would go home and lie to my family,” he says of his own childhood experiences. (Shuggie is a common Scottish nickname for Hugh and Bain is the family’s surname.) 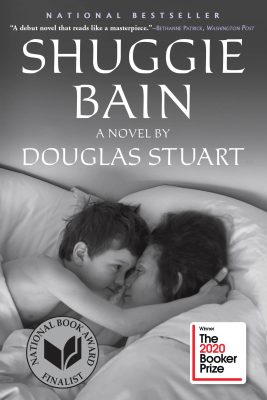 While Stuart makes it clear that this is a work of fiction, there are similarities. Like Shuggie, he grew up poor as the son of a single mother in a house “with no books”. Unlike Shuggie, whose father was a taxi driver, he never knew his own father. About Glasgow, he says, “There’s no place I love more.” He has been living in the East Village in New York City for twenty-five years, but heads home to Scotland about three times a year.

He and Michael Cary, an art curator, married in 2017. They originally met in Chicago when Stuart mentioned to a friend that he was going to the city but knew no one there. The friend arranged a meeting and they’ve been together since 1997.

His own life story makes for a sensational tale of success. After graduating from The Royal College of Art, he immediately got job offers to work in menswear in the United States. He worked as a designer here for Calvin Klein, Banana Republic, and Jack Spade, continuing in the fashion industry and writing during his “private time” after-hours and weekends. The novel took twelve years to complete.

It was rejected “between 32 and 44 times” by various publishers and then came the unexpected, mind-blowing triumph. He was among five finalists for the U.S. National Book Award and won the UK Man Booker prize. The prestigious Booker is a reward for the best work of fiction of the year that includes a prize of £50,000. Now, SHUGGIE BAIN is an international success and its author has won wide critical acclaim.

Glasgow, about forty miles away from Edinburgh, is a far cry from the castles and towers of that tourist favorite. It’s also changed dramatically from the Glasgow of the nineties, “a city of both deprivation and fierce pride,” the era in which Stuart grew up and where he recalls feeling isolated and lonely. “Everyone was in the closet.” He would check the back pages of newspapers looking for ads and has written two poignant short stories for the New Yorker based on those dispiriting encounters.

Today there is no more “set your clock back twenty five years when the plane lands,” no more eating mush for breakfast as native Mickey Rooney is said to have done as a child there. Glasgow has come into its own and is filled with “the Glaswegian spirit, full of empathy and compassion.” In fact, the law allowing gay marriage passed in Scotland a year before the United States’ did. 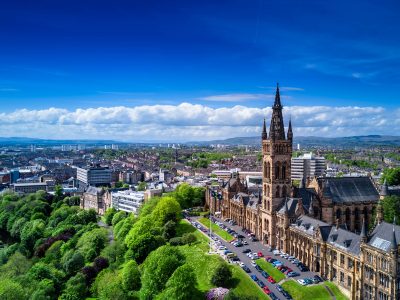 Stuart offers some insider tips for gay life in his native city today, so let’s start with his recommendation to visit DELMONICAS. [Comments added courtesy of public ratings, venue websites, or this writer]. It’s been there for thirty years, “in the heart of Glasgow’s gay community.” It’s nicknamed Dels’ and is open seven days a week claiming, “more glitter and campiness than Judy Garland walking down the yellow brick road!” Big on karaoke.

THE POLO LOUNGE is officially Scotland’s largest LGBT venue. There is a dance floor, a mezzanine and “Club X… tucked deep in the basement, where anything and everything goes.” Private booths and hideaways, hot djs and lots of celebration. Whatever gets you going, it’s here.

A classic Glasgow pub is THE LAURIESTON. Raise a glass to history and the bar’s sixties vibe. Formica and a McGee’s hot pie oven are both in evidence. “Cheers!” is Slàinte Mhath! (pronounced Slange var) Expect a warm welcome; it’s clubby.

There’s a long Victorian bar, maybe the longest in Europe, at HORSESHOE BAR. Here will be pub food, and according to the management, the best quality beers. Glasgow’s local favorite is Tennent, the popular local liqueur Glayva. Sunday night is “don’t-miss” Karaoke.

But where to eat? For a classic Scottish experience, Douglas Stuart recommends dinner at the UBIQUITOUS CHIP. “The Chip” is a Scottish chain and city’s dining icon; it’s been here about fifty years. No more everyday salmon and boiled potatoes as signature dishes.  Over the years, “aunties, grannies and folklore” provided recipes and Scottish produce is acclaimed as some of the best in the world. On the menu you might find Hebridian crab, venison haunch, haggis, or a vegetarian tasting offer. Á la carte prices range from a baked scallop entree at £14 to steak fillet at £35. Shoes are better worn than sneakers here, but dress is casual.

The name Glasgow derives from the Gaelic, Glas-ghu, meaning dear green place and though it has over seventy parks and gardens, it is also rich in museums. THE CENTRE FOR CONTEMPORARY ARTS (CCA) curates six major exhibitions a year but is not limited to promoting Scottish works. Among many others, Damien Hirst, John Cage, Roy Lichtenstein have been shown there and exhibits include film, music, literature.

Since it opened in 1996, THE GALLERY of MODERN ART (GoMA) has welcomed millions of visitors to view its distinguished Scottish and international works. In front of the gallery is a nineteenth century statue of the Duke of Wellington, which more often than not is wearing a traffic cone its head. The authorities have consistently removed it, only to have it quickly replaced. This seems to speak for the lighthearted soul of Glaswegians as Stuart describes them: “The people are resilient and know how to laugh.”

In addition to its famous Egyptian mummy, THE HUNTERIAN ART GALLERY houses European paintings, the works of James McNeill Whistler. and one of the world’s greatest numismatic collections. Here also are the recreated interiors of the home of Charles Rennie Mackintosh, Glasgow’s much-heralded architect, whose impact on this city is hard to overlook. There’s a namesake hotel, lighthouse, mural, his motif in every gift shop, and then there’s the renowned WILLOW TEAROOM, cozy for breakfast, tea or lunch. With its Art Nouveau vibe, most everything has his signature designs, somewhat reminiscent of those of his American contemporary, Frank Lloyd Wright.

A new Douglas Stuart novel is on its way. LOCHE AWE, which he wrote while “Shuggie” was still in the wings, tells the story of two gay boys who encounter obstacles in their love for each other. The title is a place name and refers to one of the largest lakes in Scotland. The Romeo-Romeo story follows the plight of the teenage lovers who are kept apart through sectarian division. One boy is Catholic, the other Protestant, and their powerful desire to be together is thwarted by societal and cultural barriers. The story takes place in the Scottish Highlands, about a two and a half hour train ride from Glasgow. Look for the novel in bookstores in 2022.