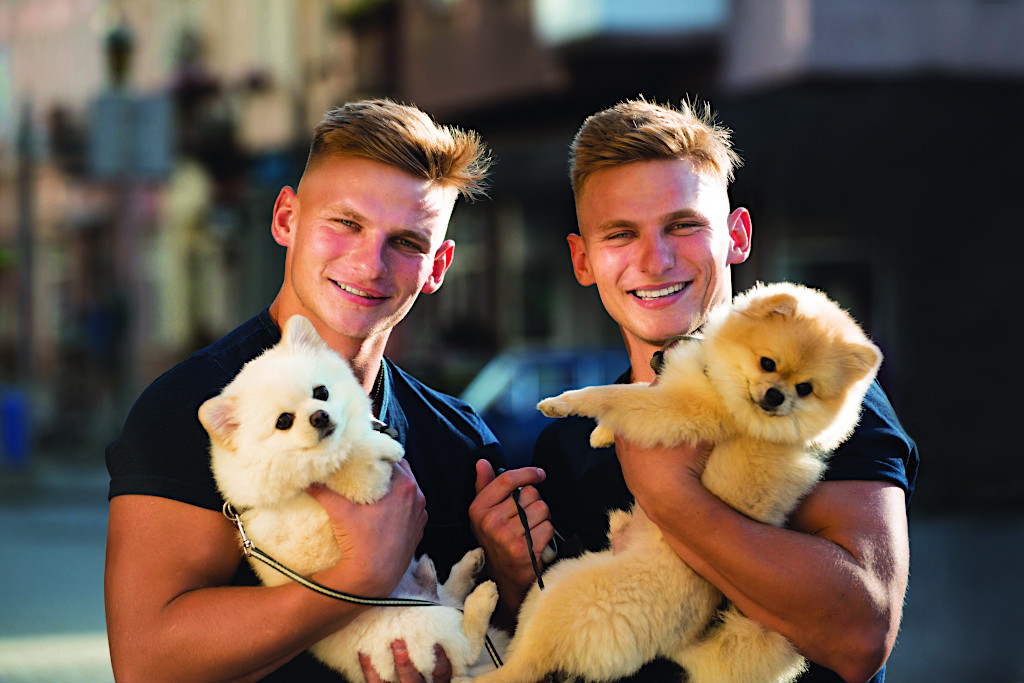 Nothing is too good for Parisian cats, dogs, and other pets, and their owners shamelessly spoil them with dog hotels the equivalent of the Ritz Paris, cat hotels and cafés, designer clothes, and the trendiest pet accessories.

Dogs are permitted almost everywhere in Paris, and their proud owners parade them to restaurants, cafes (indoors and outdoors), shops, art galleries, and local food shops…

Nothing is too good for Parisian cats, dogs, and other pets, and their owners shamelessly spoil them with dog hotels the equivalent of the Ritz Paris, cat hotels and cafes, groomers that charge $1,000 and up, designer clothes, and the trendiest pet accessories.

The most popular Parisian dog breeds tend to be smaller, low-maintenance ones, for practical reasons. Parisians live in small apartments, so you won’t spot many Saint Bernard’s, Great Danes, or Afghans on the city streets. The breeds of choice include Cavalier King Charles, Chihuahuas, Spaniels, German Spitzs, French Bulldogs, and Jack Russell’s. Believe it or not, poodles, such an obvious contender, did not make the list.

Dogs are permitted almost everywhere in Paris, and their proud owners parade them to restaurants, cafes (indoors and outdoors), shops, art galleries, and local food shops (dogs are officially forbidden in food shops, but the smaller shops turn a blind eye, so they don’t insult their customers). In fact, if you bring your dog to a café, you are almost guaranteed better service, as I personally witnessed when I first moved to Paris in 2005. I was sitting at a café patiently waiting at least 10 minutes trying to order an espresso, but couldn’t find a waiter in sight. A few moments later a woman parked herself next to me with her shiny, perfectly groomed dachshund, and out of nowhere a waiter appeared, eagerly greeting the woman and the dog, and asked her if the dog needed some water and what she wanted to drink. 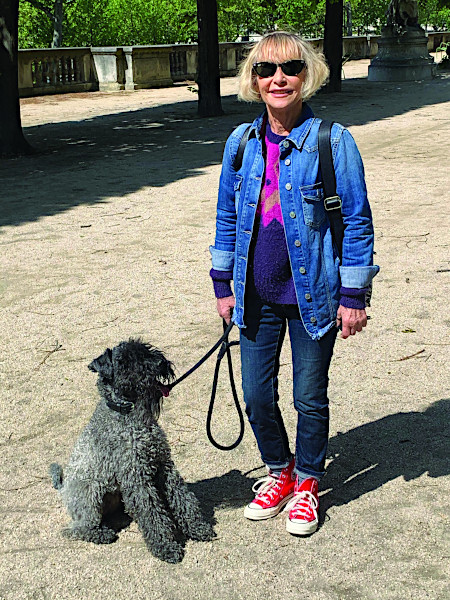 When it comes to housing their precious dogs when traveling, Parisians dare not send them to a kennel. Instead, they are entrusted to other dog owners and/or dog lovers who will lovingly take care of them using Pawshake (www.en.pawshake.fr), an international service that matches dog owners with dog sitters, almost like a canine Airbnb.

Kristine Dreuilhe, an empty nester with twin, grown sons, lives in the trendy Marais district of Paris near the beautiful Place des Vosges square. Her fluffy dog, Oaklee, is an Irish Kerry blue and has a head with black hair and a body of pale gray locks. Oaklee has a vast array of toys in her toy box and feverishly begs Kristine for treats. The pair are inseparable and Oaklee loves to accompany Kristine to do her errands at local shops, on the metro, and on the train when she travels. Oaklee snuggles up to Kristine at night and sleeps with her and also swims with her when she goes to the sea.

Kristine is not an extravagant person but when it comes to grooming, Oaklee is taken every two months to be trimmed by a world champion groomer and also brushed daily. Oaklee’s diet consists of dried, vegan croquettes (recommended by her breeder) and a host of human foods such as clementines, olives, cocktail nuts, bananas, and strawberries.

Interestingly enough, even though Parisians worship dogs, most of the parks in Paris don’t allow dogs, and there are very few designated dog runs, which are popular across U.S. city parks. With that in mind, Kristine walks Oaklee in various parks including la coulée Verte, an abandoned, elevated railroad track that was converted into a park in the 1990s (much like the Highline in New York City), le bois de Vincennes, a multi-acre park with a forest, Jardin de l’Hôtel Lamoignon Mark Ashton, a tiny, garden square in the Marais named in honor of a British LGBT-activist, and the glorious Tuileries gardens. 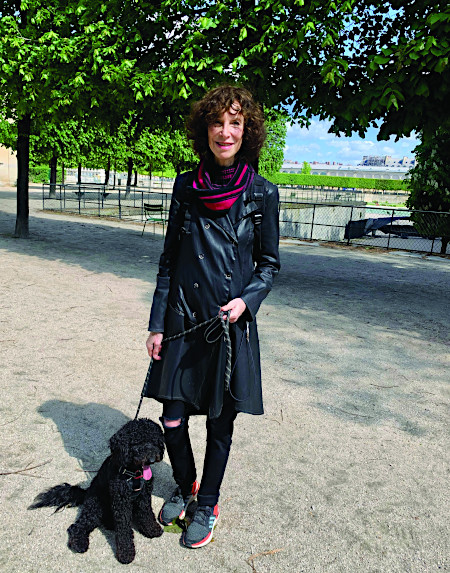 Another dog about town is 10-month-old Fitzgerald/Fitzy, a Boston terrier. His owner, Frank Barron, loves to spoil Fitzy, by taking him to a dog run in a small enclosed garden in the Marais, Square Georges Cain, and occasionally feeding him morsels of croissants in addition to croquettes from Lilys Kitchen (www.lilyskitchen.co.uk), an organic and all-natural dog food brand. Fitzy’s favorite toys and accessories are from a chic doggie boutique, Kleps (www.kleps.com), in the Les Halles district, which stocks the latest and greatest in leashes, toys, gourmet food and treats, sweaters and down coats, booties, and travel cases. Frank Barron, is also known as Cake Boy, and he creates sumptuous, custom made cakes for private clients and is currently putting the finishing touches on a cake recipe book being released in the spring of 2022.

Mixed breed dogs are unusual in France, and Louie, a labradoodle, gets lots of quizzical stares when his owner Deborah Sommers walks him. Sommers is an art director and graphic designer mostly working with non-profit organizations she is passionate about. While still training Louie, who is only 11 months old, and rather than pampering him, she takes a different approach. She carefully guides and cares for him, so when he’s grown he will be a well-rounded and well-trained dog. Sommers feeds Louie French organic dog food from Franklin (www.franklinpetfood.com), plus gives him a spoonful of peanut butter as a treat, and takes him on daily two-hour walks, sometimes through the Parc de Saint Cloud, an 1100- acre park and formal garden, considered one of the most beautiful in France.