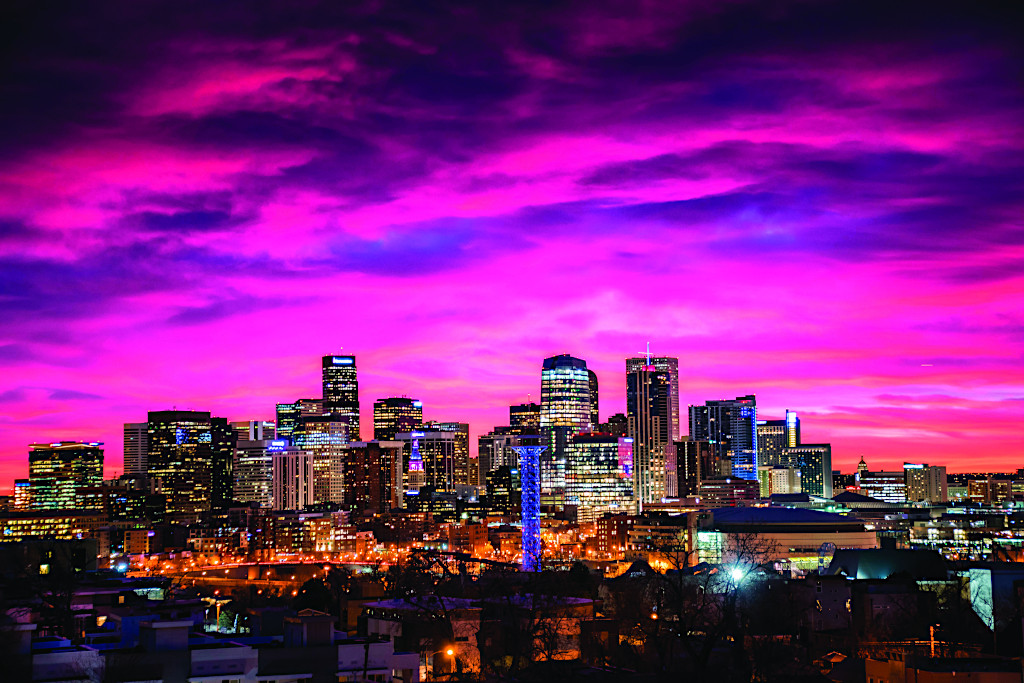 In many ways (you’ll see later why this is the ultimate compliment) it’s just an ordinary city, and that’s perhaps the thing I love best about it.

Just when I think I’ve found all the great spots, I innocently head to the Santa Fe Arts District for their First Friday Art Walk, and there to greet me is The Molecule Effect. Super-nice people and great coffee: what more could you want? They also offer drinks, so you can have an espresso, a cocktail, or the best of both worlds, an espresso martini, as well as sandwiches and such fun things as sausage or caprese breakfast muffins. You gotta love a place with a sign outside that proclaims, “Coffee Espresso Right Inside Not Kidding”!

Then it’s on to the Art Walk. People throng the streets, music plays, food trucks ply their wares, and all the galleries are open late. It’s as much a happening and a party, as it is an art event, and on a nice Denver night Santa Fe Drive is packed full. I walk past Moondance Botanicals and Gifts, the Center for Visual Art, and the Denver Fashion Truck (it’s kind of the clothing version of a food truck). A band plays on a rooftop above Nick’s House Design Studio, and as I walk along, I almost feel out of place not having blue, green, or pink hair. I go into the Museo de Las Americas, devoted to the work of Latino artists, which has an impressive exhibit called “SOMOS” (“We are”), poke my head into a few galleries, stand and listen to music here and there, but mainly I just walk up and down Santa Fe, reveling in the festive atmosphere and enjoying the people-watching as much as the art-watching.

Down at 5th and Santa Fe is the leather/fetish bar Trade which on a First Friday is a little less kinky than usual. I see the bartender welcome a mixed-gender group with the words “Hello heterosexuals and others, welcome to First Friday!” It’s a welcoming place (with super-strong drinks) at all times. There’s a sign at the front made of beer cans, dark walls, low ceilings, screens showing hot men, and a nice patio. Surprisingly comfortable, it’s an off-thebeaten- path choice for when you’re in the area. From there I hop an Uber to E. Colfax Avenue, where several of the city’s LGBTQ bars are located. First stop, X Bar, and when I walk in it’s like a 1980s throwback with its dance floor, loud music, and disco lights. I prefer the huge patio out back, with tables under umbrellas, lots of trees, and a festive and comfortable feel. The crowd is mainly but not exclusively male, youngish in general, but with a nice mix of ages overall. Five minutes’ walk away is Charlie’s Denver, and I discover as I enter that Friday night is Dueling Pianos Night! I take a seat at a wooden table overlooking the dance floor/performance space, where two huge white pianos have been set up. The bartenders are shirtless and cowboy-hatted, and signs advertise Wednesday Bingo Nights and Monday/Undies (apparently those in their underwear get free drinks). It’s a mainly male, mainly young crowd, and as with most Denver bars, there’s a nice patio out back. 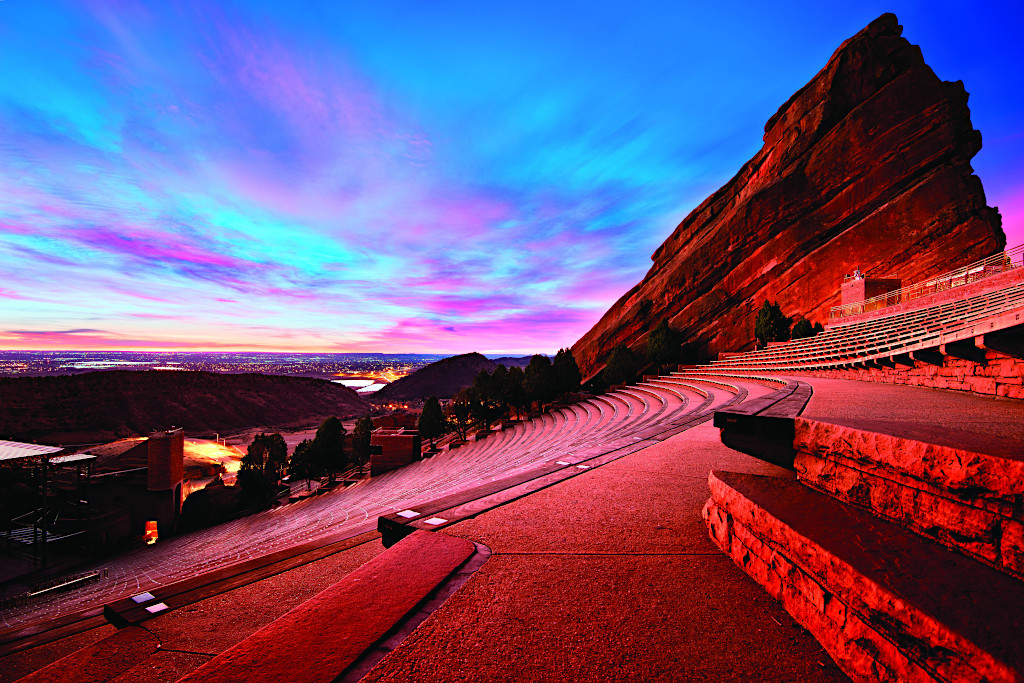 About ten minutes’ walk up Colfax are two more bars. Blush & Blu is the city’s lesbian bar, a “distinct drinkery” to quote their sign. Inside it’s comfy and low-key, almost all women (one or two men), and a singer with a guitar providing the entertainment. As the sandwich board outside says, “Get off your phone and come in for a drink.” It’s such a nice little spot that I don’t think people will have any trouble following that command! Across the street is Tight End, the city’s only gay sports bar (and my nominee for most hilariously named bar in town). Screens playing sports videos surround the bar area, whose floors are painted like yard lines on a field. There’s pizza by the slice, and, interestingly, the most even mix of male and female that I’ve seen in town.

A longish walk or short ride from the East Colfax spots is Triangle, a fun and friendly place where you’ll find a variety of entertainment from drag brunches to tequila and taco Fridays. Up in RiNo, Tracks is definitely for those devoted to dancing the night away, with a young, mainly male crowd, though I’ve definitely seen a wide assortment, flocking to its several different rooms for dancing, drinking, and watching the performers.

Sometimes, though, the best “nightlife” is just a walk around town. Denver at night is really something special, peaceful even with tons of people around. I’ve just come from a great dinner at Mercantile with my friend Jimmy and I stroll down the 16th Street Mall, which by day is kinda nice/kinda boring, but at night is something totally different. It could be the food rush I’m experiencing, but suddenly everywhere I look there is magic. As I walk past a hodgepodge of architectural styles, some Victorian, some modern, some both in the same building, there’s a sense all at once of serenity and activity. A band can be heard faintly from a distant bar. A man walks by with his shoes flashing against the brick sidewalks as his radio proclaims something about great deals on electronics. Six teens run for the Mall Ride and miss it. I know this all sounds like totally ordinary stuff, and it is. Somehow, though, that is the joy of Denver: that the totally ordinary somehow becomes something that isn’t ordinary at all. Or is so hyper-ordinary that it has its own extraordinary quality. Does that make sense to anyone but me?

The sky darkens into a deep, deep blue. Streetlights shaped like teardrops shine amber over the deep red bricks. I take a photo of their glow over a parking lot and the result looks like some charming European village. The 1911 clock tower, lit in green and blue, strikes 9 P.M. In front is a sign for a drag show at the Clocktower Cabaret (which, by the way, is a great place to visit for some LGBTQ-friendly entertainment). On the back of the tower, an ever-changing video/light show plays across the vintage building, the results of a project called “Night Lights Denver.” I stand transfixed as the scenes shift: exploding flowers, abstract pines below a starry sky, slowly moving rows of diamonds, stark black and white mountains.

At this moment, I honestly can’t think of anywhere in the world I’d rather be. Is it just me, or does Denver, against all odds, have this effect on everyone? For these few moments, sitting on a stone bench watching the sky finally darken into black and the images play across the tower, I know that I’m in exactly the right place, a very special place that is so ordinarily extraordinary, so wonderfully and unapologetically and proudly itself that it really doesn’t want to be any city in the world except what it is. That’s the greatest thing about Denver: it’s happy being Denver. How can you not love a place like that?

Related:  Nature And Nurture in The Berkshires