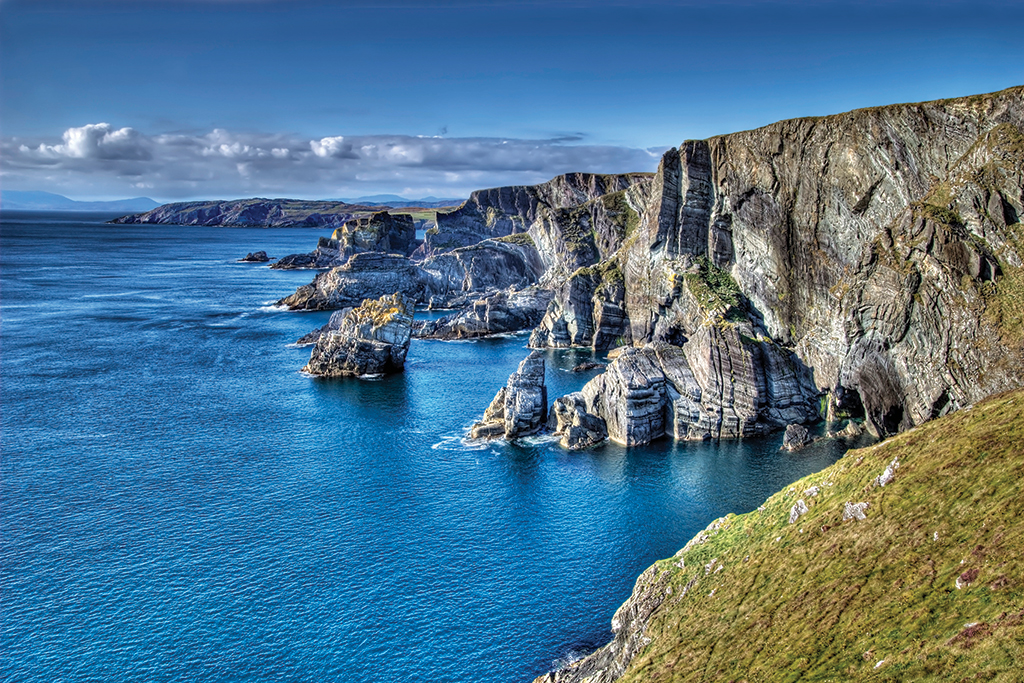 Renting a car is the easy part, but navigating Ireland's dizzying roads is another challenge altogether.

The Enterprise Rent-A-Car (www.enterprise.com) woman looks up our reservation and comments that we have a special LGBT package, and, after a “wink wink” look at Tom and me, she insists that we get her best car. Nervously, I accept the upgrade, not wanting to give off any vibes that my driving skills are less than amazing. We’re soon off through the labyrinthine Dublin streets, and I get surprisingly good at closely following the cars in front of me out of the congested streets

“So we’ll be there in about an hour?” I ask Tom as my clammy hands try to grip the leather steering wheel.

“What do you mean? Ireland isn’t that big, and we’re just driving right there,” I say pointing to an imaginary location against the backdrop of pouring rain.

“I think your sense of geography is way off Joe,” Tom says disapprovingly.

I calmly collect myself and mentally prepare for a three-hour drive and our adventure ahead. 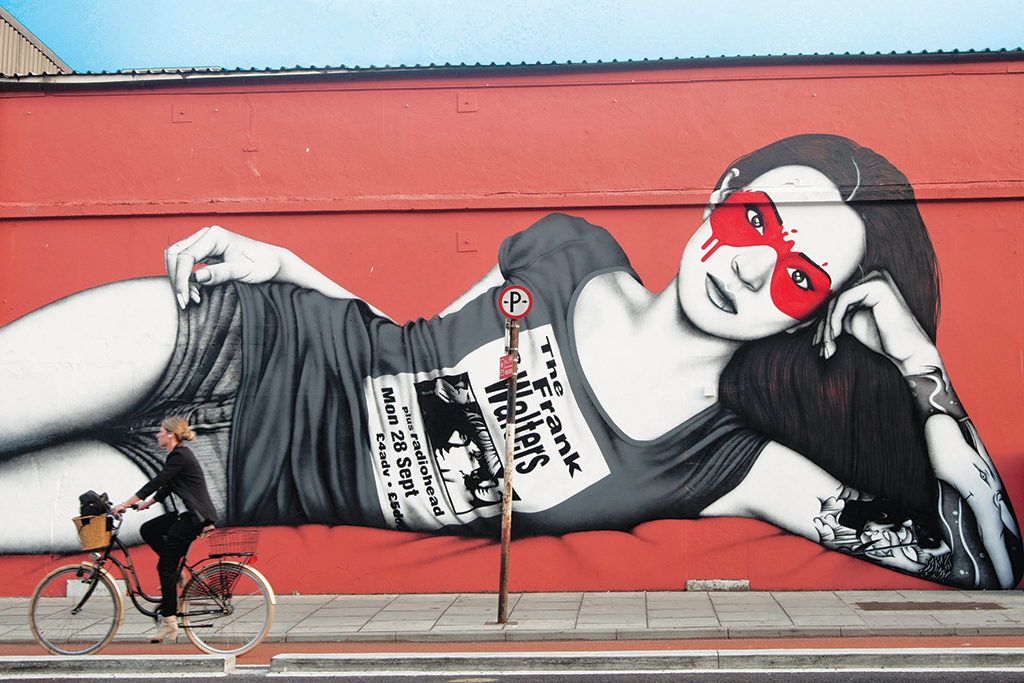 “JOE, JOE, JOE,” Tom screams as I realize I’m instinctively drifting to the right and swerve back over left. “This is going to be a long drive,” he adds grumpily. Not even ten minutes out of Dublin on the M6, and we’re rerouted because of heavy winds and flooding. We’re brought to just-as-flooded country roads where an inch away from us on one side, cars and tractors are whizzing by with Irish fury, and an inch to the other side are zigzagging country rock walls.

“Lots of people on the country roads don’t even have licenses,” Tom proudly points out as an oncoming tractor forces me near centimeters from a stone wall.

Then, we get stuck behind a caravan of cars. One by one, they swerve into the right lane, waving a big screw you to the oncoming traffic as they pass something. When it’s our turn to go around the road obstruction, I realize it’s a herd of sheep, just relaxing against the wet centuries-old pavement.

“It’s just some sheep Joe, just pass,” my no-license backseat driver commands. Upon his order, I do my first, of many, death-defying maneuvers in Ireland, but that’s part of what you have to love about this country. Here, with each turn down a sinuous road, where “One Way” signs are just suggestions, you’ll uncover a place filled with the unexpected. 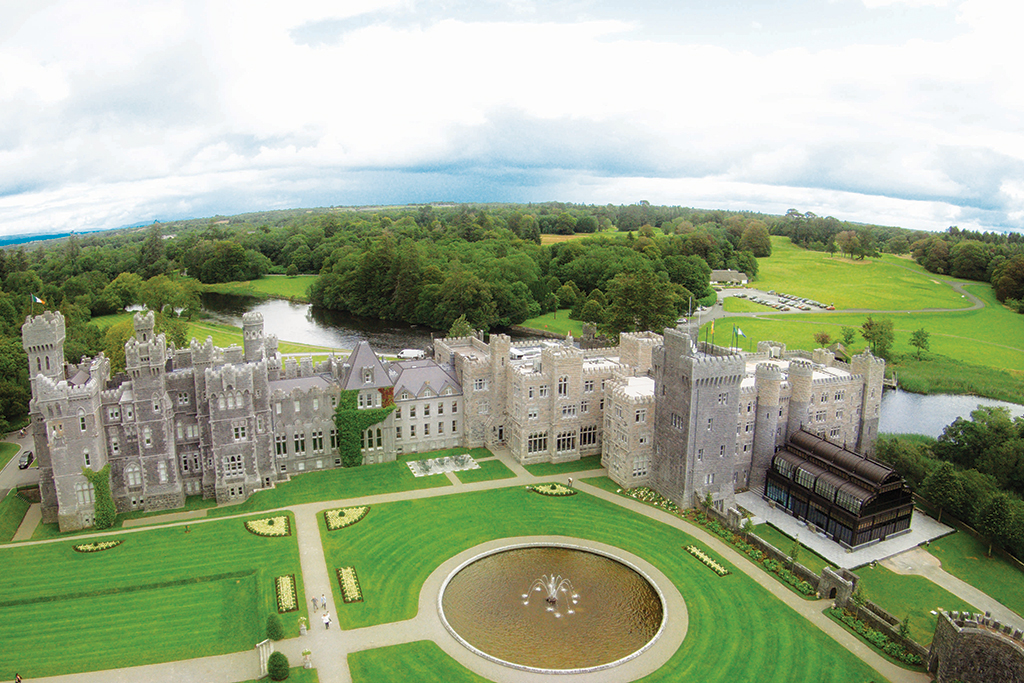 The winding entrance road takes us past lawns so lush I declare loudly “It’s so green!” Tom, who was born in rural County Kildaire, laughingly rolls his eyes.

Through a fog seeping over the road from the loch, we see the grand castle. I shyly pull up, hiding our sandwich and soda rubbish as a well-dressed doorman walks up to assist us. We make our way through the rain to the main entrance feeling a bit like Brad and Janet entering The Frankenstein Place in The Rocky Horror Picture Show, looking up at the building silhouetted by the glooming. With a warm welcome you’d expect from a Red Carnation Hotel, we’re ushered in from the rain and almost immediately served a hot toddy, as guest relations hands us an itinerary for our stay.

It’s hard to pay attention with all the impressive features adorning every crevice. I see Tom ogling in the main foyer and already snapping iPhone pictures. We’re led to our room: up and down stairs, past oil- painted portraits that eternally watch the red-carpeted halls, and we nearly scrape a suit of armor that stands guard (according to tales, rowdy wedding guests have attempted to put it on). 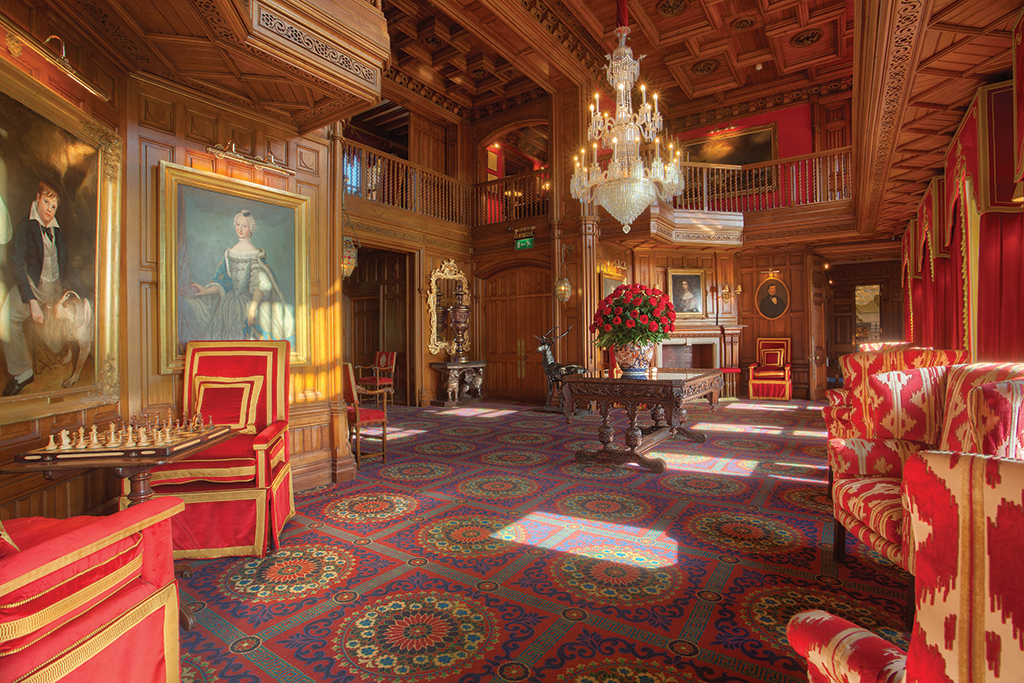 We open the door to Suite 326, and find a dining space with a chaise lounge, green curtains that when open reveal the rushing waters of River Cong, a four-poster bed, and, most impressive of all, a massive bathroom with surrounding windows. In the center is a gorgeous marble bath (that supposedly had to be brought in through the window when the hotel was renovated).

Our first night, we’re told to put on suit jackets, as they are required for the George V Dining Room, the hotel’s signature restaurant that is Old World at its finest.

We’re the first to arrive, and the staff greets us like old friends. Before heading to our table, we decide to have a drink at the Prince of Wales Bar. The bar’s namesake became King George V, who was a guest of the castle in the 1800s. The room is masculine and opulent, and you can imagine it when the Prince and his friends were in residence.

The dining room soon begins to swell with guests of every stripe, and by the end of our eight-course tasting with wine pairings, the distance between each table seems smaller, as diners get a little rowdier and a lot friendlier. Chef Philippe Farineau’s wild langostines are delightfully fresh and swim in an almost-sweet broth accompanied by a seaweed salad that adds a crunch and pairs exquisitely with the 2012 South African chardonnay, Thelma, Stellenbosch. The highlight of my meal, however, is the hake in a dashi and lemongrass sauce, an unex- pected flavor profile from a place so rooted in Irish tradition. 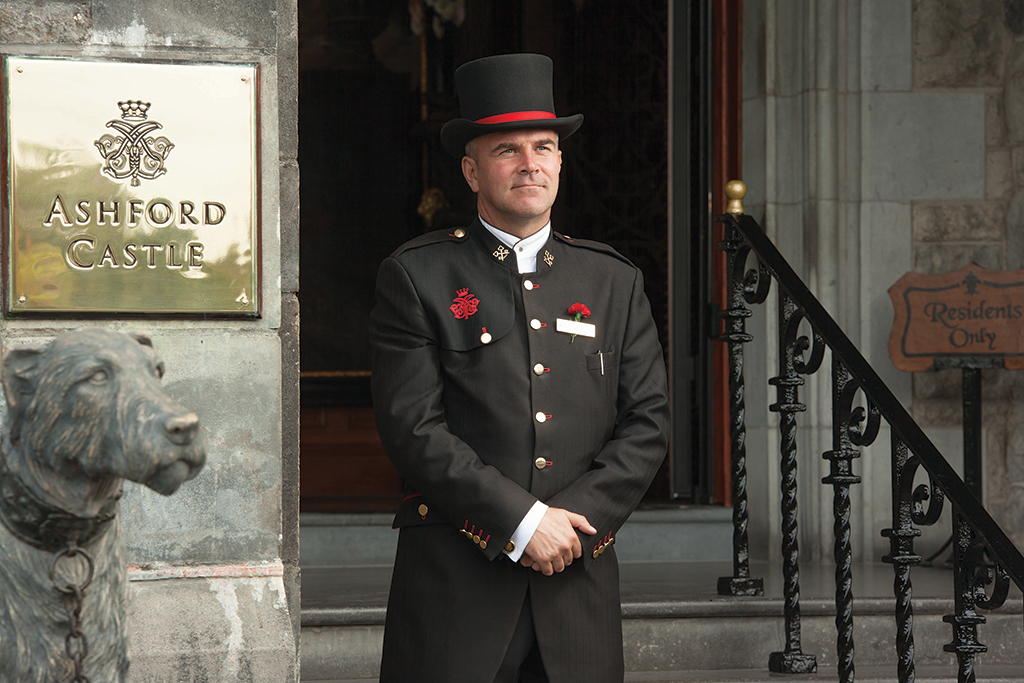 By the time the cheese board rolls around, we’re chatting with an elderly couple about their dining choices, and then everyone heads to either a lobby area where music is being played or to the Billiards Room and Cigar Terrace—like proper gentlemen, we visit the latter.
When we return to our room, an assortment of chocolates and sparkling wine await, and we appropriately feel like kings of the castle.

Just don’t step over this line to the cage,” our falconer says as I step over the line toward the cage. He gives us our falconry cowhide gloves, and Tom reaches for my face. “Just don’t touch anyone’s face,” our guide says as Tom touches my face. “I can see this will be a fun group to go out with today,” he laughingly says as Tom’s cheeks turned Catholic-in-trouble red. “Do any of these falcons tickle you?” he asks showing off the long line of predators sitting patiently on their perches, waiting to be chosen like in a schoolyard pic. “He looks nice,” I point to a bird that looks the exact oppo- site of nice. “Very good choice,” he says. “He’s the oldest bird we have and kind of grump, but no one ever picks him!”

We’re happy with our choice, as the bird’s calm demeanor seems to suit the rainy day. We walk through just some of the castle’s 350 acres on the picturesque shores of Lough Corrib. The falcon comfortably is perched on my outstretched arm. “Throw your arm up authoritatively,” our guide says. And I do, and he beautifully glides (for an old man) to the nearest tree branch. Now, he hands me raw chicken (that’s why he didn’t want us to touch each other’s faces, I think), and tells me to point my finger out, and he swerves through branches back to my arm. I become quite the natural at this, and, our guide from the onsite falconry school seems thoroughly impressed, as the falconer’s lets me call the bird from directly above my head.

Tom also gets his chance to play, and he seems to be enjoying himself so much so that our guide lets him do what is called “the finale.” Unbeknownst to Tom, the falconer has replaced the butchered pieces of chicken that we’ve been using thus far with a full dead baby chicken (still with its bright-yellow fur). Tom watches in horror as the falcon swoops down and devours the chick piece by piece, as chunks of bloodied yellow flop on Tom’s glove, our guide seems to fancy our disturbed reactions to the carnage. “That’s why you don’t touch each other’s faces with gloves,” he laughs.

BRENDAN VACATIONS
Our entire trip was facilitated through Brendan Vacations (www.brendanvacations.com), who have quite the sway within the travel industry. At each property, we were treated like rock stars (this could also be because we booked their Romantic Ireland Package). The company is the first to offer a package like this to lesbian and gay travelers, launching a few weeks after the national referendum in Ireland was passed to allow same-sex marriage. Their all-star programs, of course, allow travelers to have the final say in their trip so you’re not stuck to the confines of a rigid, cookie-cutter package. We wanted to visit the spa and laze over tasting menus, and they made it happen. Catherine Reilly, managing director of Brendan Vacations’ Dublin office, met us before we took off on our trip, and I watched as she and Tom chatted excitedly about how far Ireland has come. “Ireland is a warm, friendly country with an ancient culture where people are valued, accepted, and equal. Every guest is consistently treated with this consideration,” she said. “We live up to our reputation of one hundred thousand welcomes, or as we say, céad míle fáilte (kaid-meela-fallcha). Whether it’s an LGBT couple, family, or solo traveler, when we’re all sitting around a table laughing and sharing a meal or a pint, you quickly realize that we are more similar than we are different. That is the magic of traveling to Ireland,” she adds with an enthusiastic smile.
Irish Road Trip: Dublin To Cork was last modified: July 13th, 2021 by millawynn