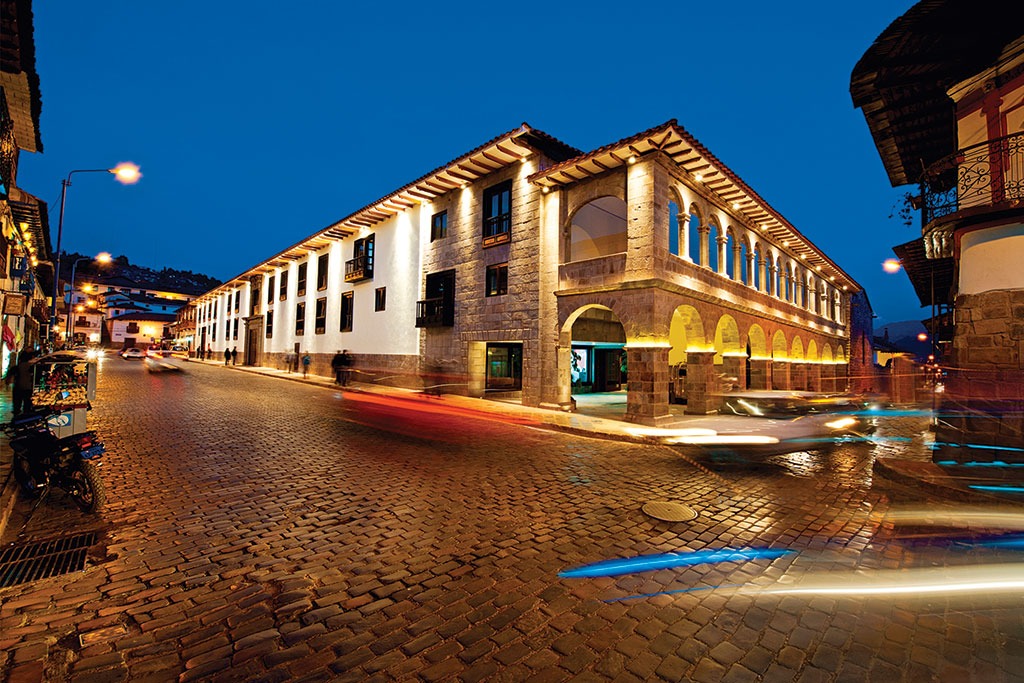 The long, winding pilgrimage from North America to Peru’s seventh wonder, Machu Picchu, requires several pit stops and connections. Chief among these is the destination’s gateway and a major tourism magnet in itself, the ancient Andean city of Cusco.

Declared a UNESCO World Heritage Site in 1983, Cusco (sometimes spelled Cuzco) is rife with ancient Inca and Spanish-colonial heritage and archeological treasures, lively markets, museums, rustic squares, and cathedrals, and, to combat the 11,000-plus feet above sea level, thinaired atmosphere, plenty of coca leaf (yes, the stuff cocaine is made from) to chew and make tea with.

Upon checking in at the three-year-old JW Marriott El Convento Cusco (Esquina de la Calle Ruinas 432 y San Agustin. Tel: +51-84-582200. www.marriott.com), I immediately do the latter, filling an insulated cup with piping-hot water, a generous scoop of the dried coca leaves, which resemble slightly rounder bay leaves, and some stevia for sweetness. The resulting elixir, mate de coca, packs a very mild flavor, tasting ever so slightly of barley, and I chew the moistened greenery for added jolt.

During my stay, I frequently return to the check-in area’s coca tea station to stave-off altitude sickness with this mild stimulant and take in the splendor of ancient Inca, pre-Inca, and 16th-century Spanish architecture that makes up part of this utterly stunning oasis of luxury and authentic culture. (Note: it’s illegal to bring anything containing coca leaf back to the USA).
The JW Marriott El Convento incorporates remains of Cusco’s 16th-century San Agustin Convent (hence the property’s name) and is located smack dab in the city’s vibrant historic district a mere
two blocks from the lively Plaza de Armas main square. 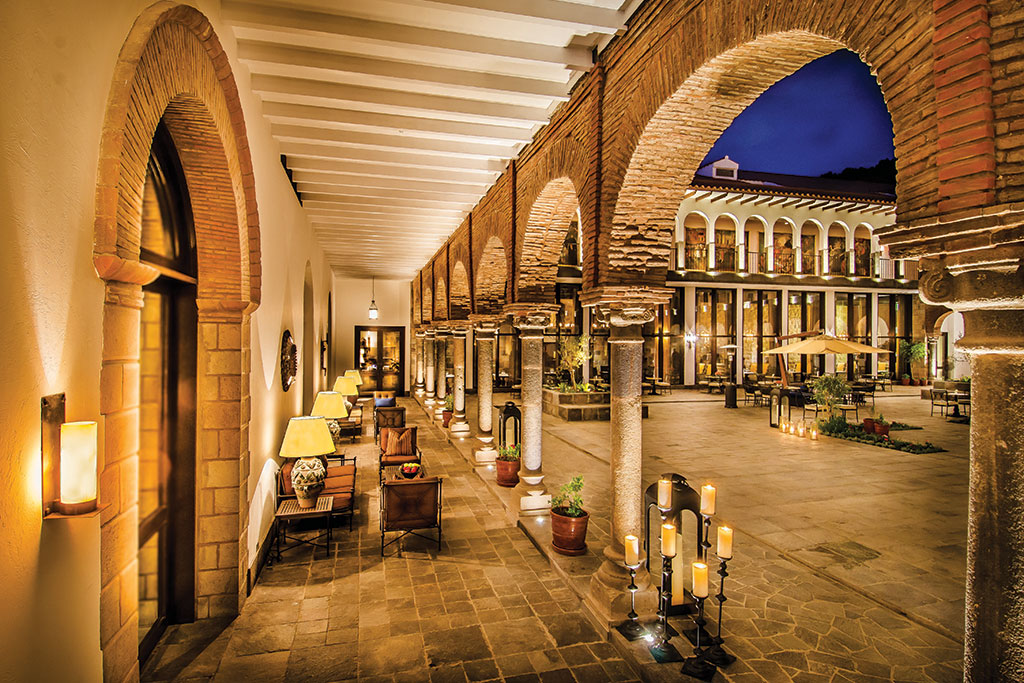 A painstakingly restored gatehouse entrance serves as the first point of access and a passage lined with upscale boutique shops. Once inside the lobby (formerly a chapel), guests are greeted by the eye-popping vision of a giant, glimmering amber-toned sun—a tribute to Inti, the Incan sun deity-comprising 76,500 dangling Swarovski crystals.

This is a very special place indeed. It’s an oasis of state-of-the-art, full-service luxury, and an important historical attraction boasting not only 16th-century architectural structures but also a collection of ultra-rare artifacts from Cusco’s pre-Inca Killke period on display museum-style in a 990-squarefoot showroom. Free 30-minute tours of these artifacts and details are available for guests daily.

These artifacts were excavated during the laborious four-year and $56 mil- lion process of transforming the site and its few yet prominent standing structures, notably three sections of arches that now form a cloister-style courtyard, into what exists today.

While the Incas established Cusco as their culture’s base circa 1100 C.E., with members of government and VIPs taking up residence, the region had previously been inhabited several hundred years earlier by the Killke. Come the 1500s, the Spanish arrived and ultimately claimed the city, and the Augustinian order of hermit monks’ convent and church came to be.

Over the centuries, natural disasters, including a handful of massive earth- quakes, wreaked havoc on the Spanish and Inca buildings alike. Little more than several sections of arches stood when developers Inversiones La Rioja acquired the decrepit site in 2006. Sev- eral years later the first stone for the JW Marriott was laid. 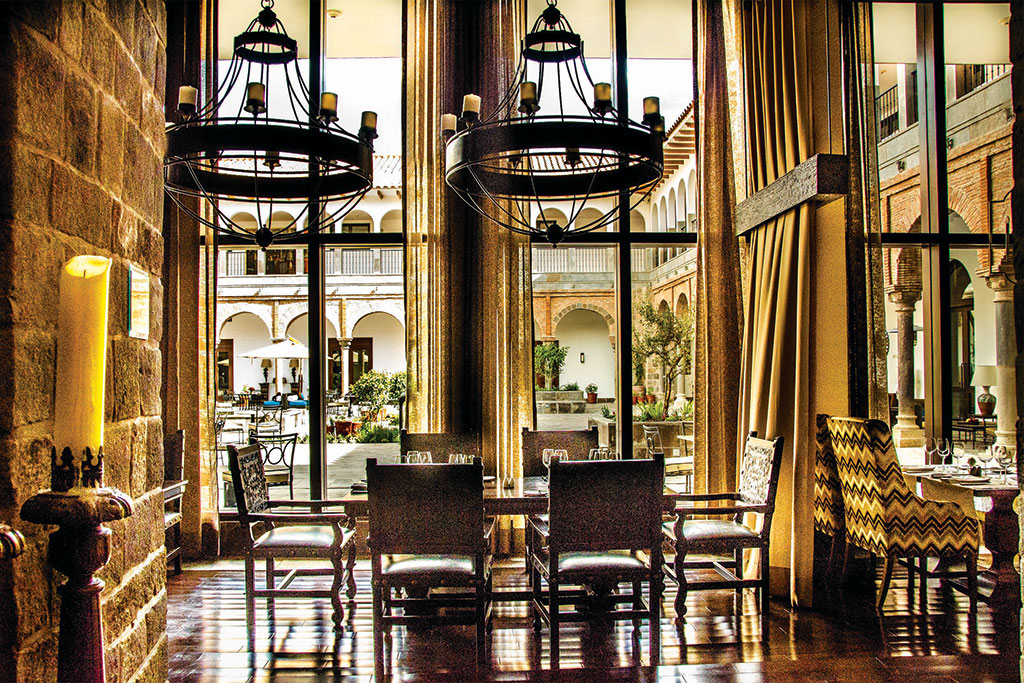 Some of the 153 guestrooms, which range from 323 to 900 square feet, feature views of excavated Killke and Incaera walls. My room’s amenities are utterly modern, including Wi-Fi, built-in electrical outlet converters, and soundproof windows, yet capture the ancient culture that so defines Cusco. Each room also features an oxygen-enriching system that, through its infusions, reduces the altitude effect on your body to a more comfortable 7,800 feet above sea level.

While some individuals suffer profound altitude sickness brought on by low-oxygen levels, with full-on fainting spells, exhaustion, headaches, and nausea, I seem to manage OK with frequent infusions of coca tea, copious quantities of water, and sucking small lemon and chicha-flavored hard candies.

I become quite addicted to the latter. Chicha morada is a deep purple-red hued, semi-viscous drink brewed from Peruvian purple corn, pineapple, cinnamon, cloves, and citrus, and it’s ridiculously tasty. It’s my new favorite cold drink ever, and I order it at every meal at every restaurant that has it. Chicha is also sold at little stands and holes in the wall spots, called chicharias appropriately enough and visually identified by red plastic bags out front. Since chicha can contain small amounts of alcohol from its fermentation, sometimes pisco sours are made with it. The ceviche lounge at the iconic JW Marriott Lima (Malecon de la Reserva 615, Miraflores, Lima. Tel: +51-1-217-7000. www.marriott.com), for example, whips- up a really awesome chicha pisco sour with a foamy purple head. 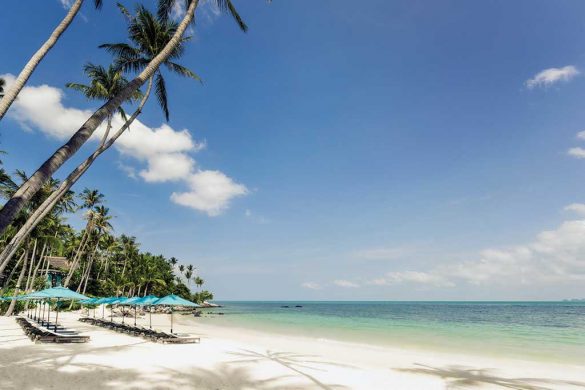 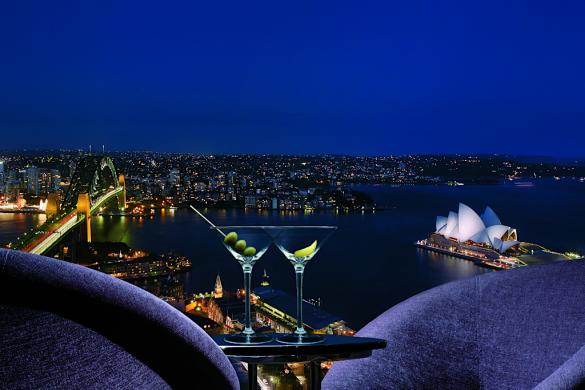 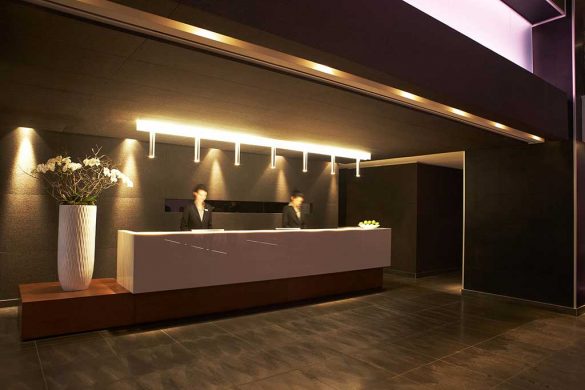 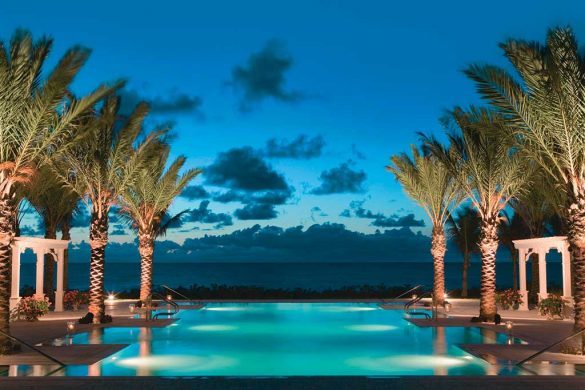 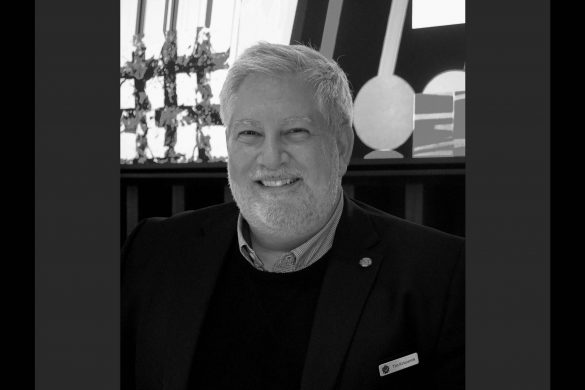 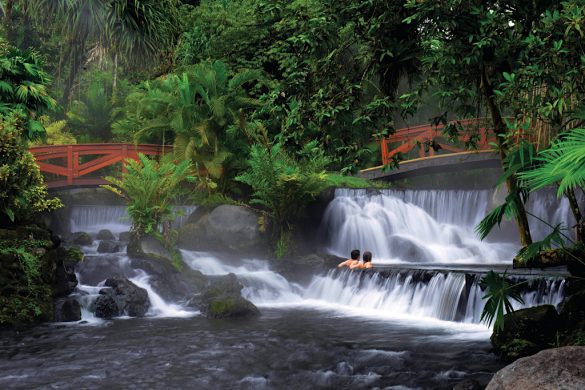