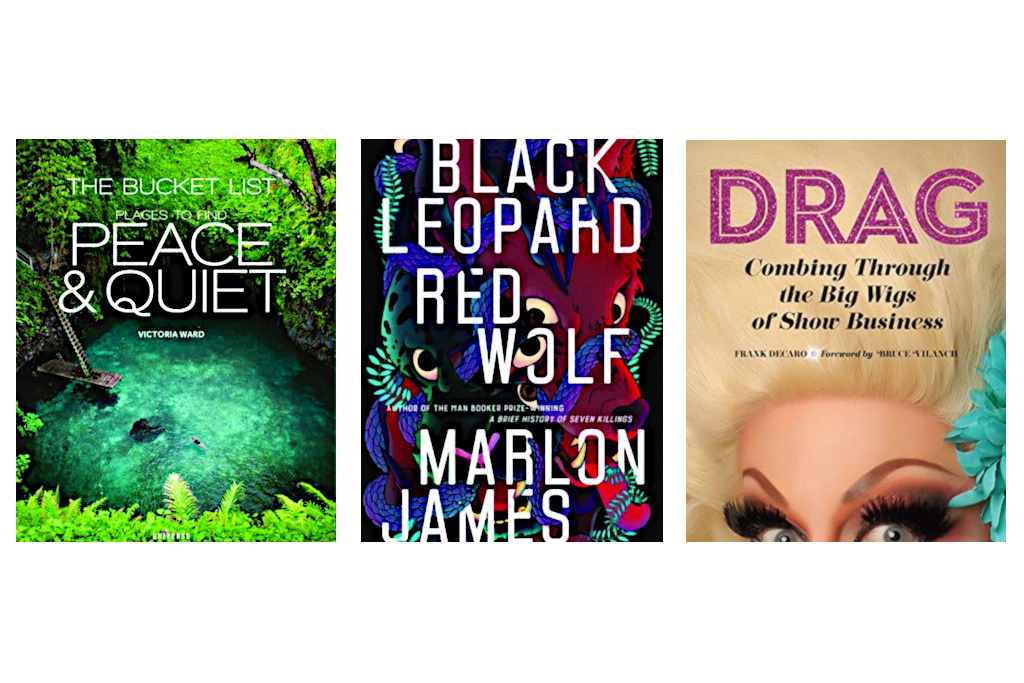 At 640 pages, gay Booker Prize–winning author Marlon James’s latest novel may take you a few flights to finish, but it will keep your imagination soaring through them all. 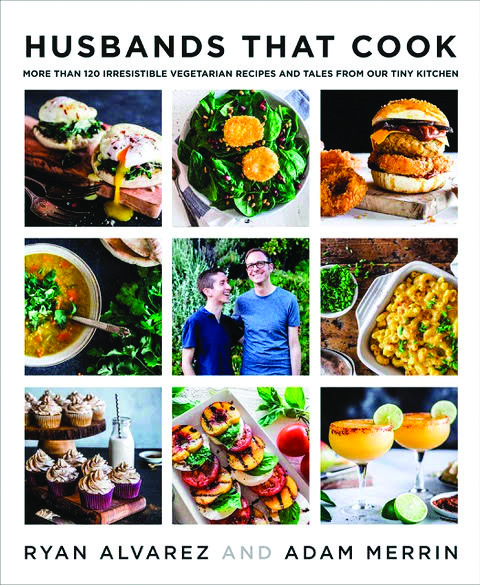 Longtime strivers in the entertainment field, Los Angeles–based actor Ryan Alvarez (small parts in the likes of American Horror Story and Superstore) and musician Adam Merrin (his former band, the 88s played back-up for Ray Davies and did the theme song for NBC’s Community) got their big break in September 2016. Not for performing though—for cooking! The prior year, the married couple had started an online recipe blog as a natural outgrowth of their love for cooking with each other at home. With its mix of easy-reading personal anecdotes about their discovery and development of new dishes, well-tested, easy-to-follow recipes, and their own terrific photos (shot in their kitchen, with natural light and no food stylists), their blog quickly developed a following and won a Reader’s Choice award from Saveur magazine.

Soon enough, a literary agent who specializes in cookbooks gave them a call and their blog began to beget Husbands that Cook, (St. Martin’s Press, $32.50. www.husbandsthatcook.com) the book . “You’re probably wondering who are these drop-dead gorgeous guys on the cover,” writes Merrin in his introduction, tongue firmly planted in cheek. With a handful of exceptions, none of the over 125 recipes here have been featured on their blog, though they’ve been written in the same friendly style. Mentioned almost as an afterthought in a subtitle is the fact that all of the couple’s recipes are vegetarian. Which is not to say hippie food. The cakes and cookies are rich with butter and sugar, the soups and entrées hearty and flavorful enough to please any meat eater. Rather than esoteric new-fangled dishes, the focus is on homey satisfaction and foods that conjure fond memories for the authors, from the empanadas Alvarez’s grandmother used to make to a friend’s Life Changing Cornbread (Spoiler alert: Sour cream). Merrin confesses to having been intimidated by kitchens and cooking in the not-so-distant past and assures potential book buyers that the recipes here are easy enough for even the likes of him.[/columns]

The Bucket List: Places to Find Peace and Quiet 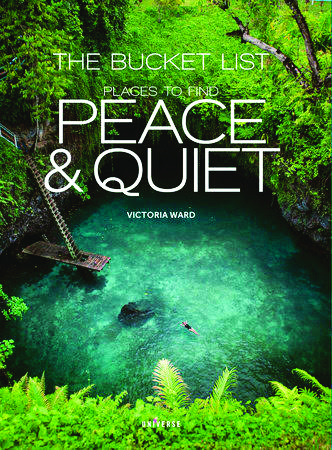 Who better to write a book on serene getaways than a former travel journalist who currently works as a cognitive hypnotherapist and describes herself as an introvert who “likes nothing more than finding a place of solitude to read and write”? So, welcome Victoria Ward and The Bucket List: Places to Find Peace and Quiet (Universe, $35. www.victoria-ward.com). Packed with luscious, dream-feeding photographs, this chunky coffee-table volume categorizes 1,000 different destinations by both continent and four distinct styles.

There are Urban Oases, including the likes of Portland’s elegant Tao of Tea and the conveniently secluded Georg Kolbe Museum and Café, down a tiny alley in the heart of Berlin; Mind, Body, Soul spots like the Temazcal Mayan sweat lodges in Tulum, Mexico or Jerusalem’s Deir Es-Sultan, a Coptic monastery; Great Outdoors locations, such the marble caves in Chile Chico, Chile, which you can float through by boat atop a gleaming blue glacial lake; and Luxury Layovers, including the remote Kooljaman resort in Western Australia and Tokyo’s Henn-Na Hotel, where you’re sure to be left alone—it’s staffed almost entirely by robots. 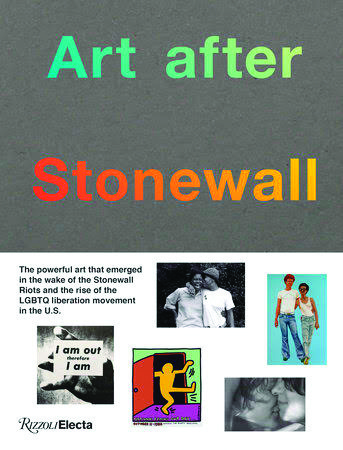 Art historian and curator Jonathan Weinberg has been closely examining queer American art and artists over the course of several landmark books and deeply insightful exhibitions, including “Male Desire: The Homeoerotic in American Art,” “The Piers: Art and Sex Along the New York Waterfront,” and “Speaking for Vice.” While much of his past work has helped unlock the secret gay subtexts of artwork dating back to the 1800s and earlier, his latest project, with collaborators Anastasia Kinigopuolo, Drew Sawyer and Tyler Cann, focuses on the more recent explosion of openly queer creators and their work. Art After Stonewall: 1969-1989 (Rizzoli, $60. www.jonathanweinberg.com) builds a bridge from the early days of the gay rights movement through the AIDS epidemic, both of which resulted in artworks that almost inevitably yield correspondences between the personal and the political.

Along with widely known artists, including Robert Mapplethorpe, Nan Goldin, and Keith Haring, this heavily illustrated volume (more than 200 images) will introduce readers to the likes of Harmony Hammond, Ashton Harris, and Greer Langton, all of whom had pivotal, if underrecognized roles in the revolution of representation that went on for queer America during these two dramatic decades of change.

Drag: Combing Through the Big Wigs of Show Business 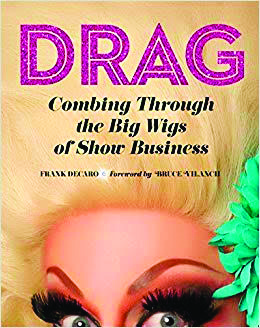 I”Once the runners-up from RuPaul’s Drag Race have sashayed away on a gay cruise to Puerto Vallarta, and once Hedwig’s collection of Hurt Locker: The Musical playbills all have been recycled, how much does anyone really know about the history of cross-dressing in show business?” asks Frank DeCaro in the introduction to his much needed (if lamely titled) new book, Drag: Combing through the Big Wigs of Showbiz (Universe, $27.50. www.frankdecaro.com). Even for many members of the queer community, the answer is: Not nearly enough. While reading quite breezily, DeCaro’s book will provide a much needed education to members of the generations for whom cocks-in-frocks are prime time middle-of-the-road entertainment.

From the gender-bending traditions of kabuki theater, through Victorian-era vaudeville, through straight-centric Some Like It Hot, Tootsie, and Mrs. Doubtfire (Oddly absent: Flip Wilson’s Geraldine), all the way to Courtney Act, DeCaro humorously traces not just the history of drag performance, but the evolving psychology of both performers and audiences over time. Drag is a cheerful, colorful corrective for the ignorant and a sashay down Memory Lane for the wise old queens among us. 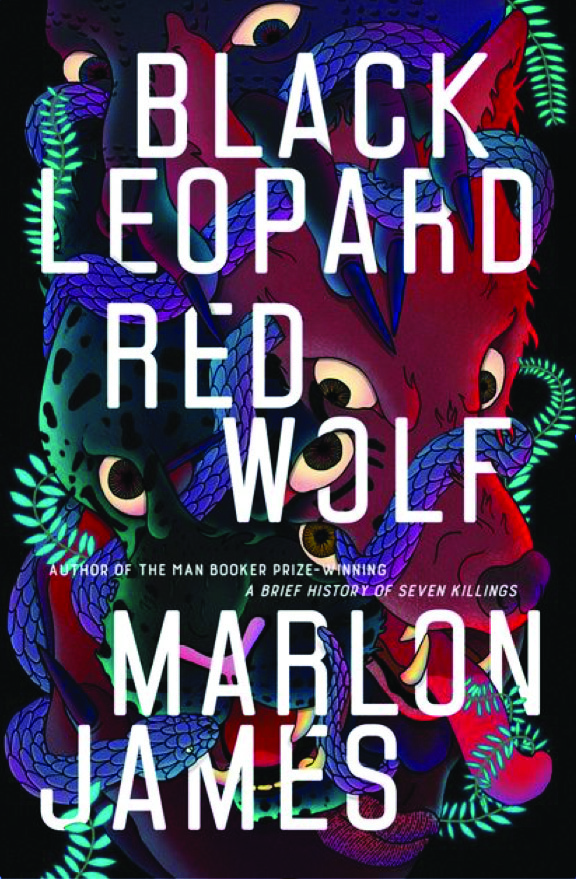 At 640 pages, gay Booker Prize–winning author Marlon James’s latest novel may take you a few flights to finish, but it will keep your imagination soaring through them all. Black Leopard, Red Wolf (Riverhead, $30. www.marlonjameswriter.com) is the first volume of an epic fantasy trilogy that the author himself has described as an African Game of Thrones. Along with bringing a fresh racial perspective to the genre, James delivers a potent dose of sexuality that you’ll never find in Middle Earth, Shannara, or any other book of its ilk. Gay readers have long been attracted to fantasy books for the sense of escape that they offer, but this also brings certain fantasies to life: Amid the addictive page-turning quests and battles are sex scenes so vibrantly carnal that sweat practically splashes off the pages.
Hot Type for Savvy Travelers — This Month’s Best Books was last modified: June 4th, 2020 by Jim Gladstone
Best Airplane ReadsBest Books for TravelersLGBTQ Books
Like
Like Love Haha Wow Sad Angry
33
Facebook Twitter Google + Pinterest
previous post