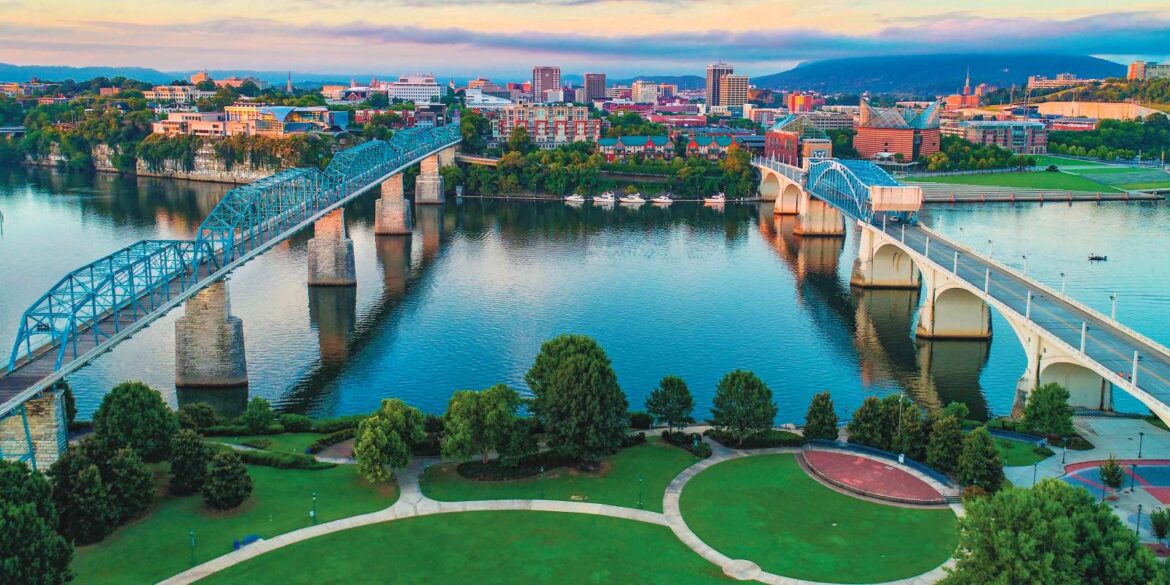 It’s a little cartoonish and a lot rusty, and to me it reflects a town with sense of humor that keeps things upbeat, even during hard times.

The fourth-largest city in Tennessee, Chattanooga is often overshadowed by the down-home flashiness of Nashville, Memphis, and Knoxville.

All travels leave memories imprinted in our hearts and minds, but it’s a particular joy to find that happy recollections of a place can be outdone on a second visit. Years ago, I found myself charmed by Chattanooga, Tennessee. The mid-sized city served up great restaurants and nightlife, culture and scenery, and the other fun discoveries essential to any notable destination.

The city stuck in my mind as a place I’d return to someday. In this case, it was about a decade later, enough time that I had to wonder if a repeat visit would prove whether the Chattanooga charm was real. It is indeed, and now I count myself an official fan of this naturally beautiful town perched on the Tennessee River.

The fourth-largest city in Tennessee, Chattanooga is often overshadowed by the down-home flashiness of Nashville, Memphis, and Knoxville. But the true character of Chattanooga is infused in its civic pride, cemented by its star turn in the Glenn Miller’s big-band classic Chattanooga Choo-Choo.

The song came out in 1941, and there’s something so sweet and whimsical and uniquely American to it. The tune, like the city, feels buoyant. Even more so looking up at the giant “Choo-Choo” train sign hovering over the historic train station. It’s a little cartoonish and a lot rusty, and to me it reflects a town with sense of humor that keeps things upbeat, even during hard times. 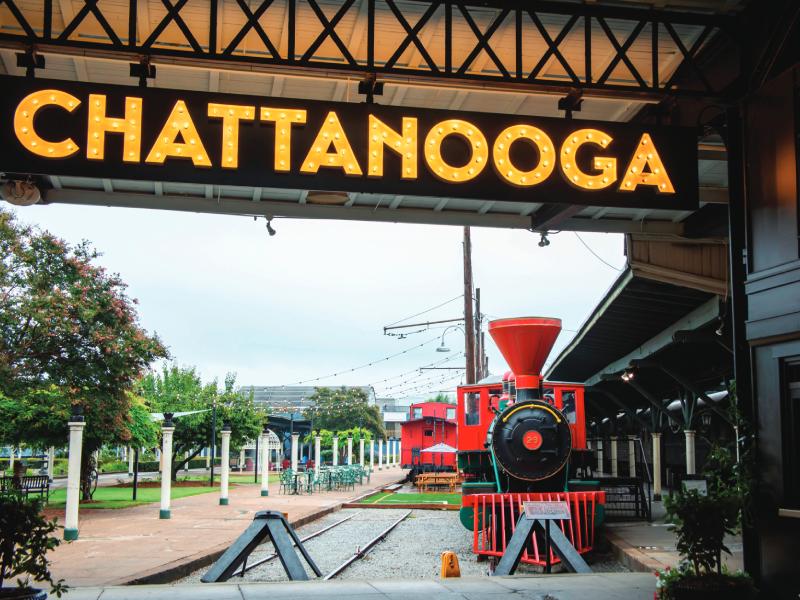 On my recent visit, I had more time to explore Chattanooga than my first go-round. I was glad to stay in the Southside, where that famous train terminal is now a destination for dining, shopping, and entertainment. The retired 1909 Beaux-Arts building now doubles as the boutique Chattanooga Choo Choo Hotel (1400 Market St. Tel: 423-266-5000. choochoohotel.com), a cool way to spend time inside a registered national landmark.

Beyond the hotel, I loved roaming around the terminal’s restored main lobby, which leads into the railyard now home to colorful old train cars and the Glenn Miller Gardens. Inside one historic car, American Draft (Tel: 423-498-4001. americandraft.beer) invited me to come inside and pull my own beer in perhaps the country’s most memorable beer garden, with taps lined up indoors, and lounge seating on an outdoor terrace.

Through the Choo-Choo’s corridors, I had to check out the local crafts and souvenirs at Sweetly Southern (Tel: 423-265-6582. inandaroundthechoochoo.com) on my way to brunch at Frothy Monkey (Tel: 423-680-6343. frothymonkey.com), a prime spot for good food and people-watching from the big patio.

The Southside is one of the more happening neighborhoods in Chattanooga, where it’s easy to make a night of it along Station Street, the city’s only open-container promenade. There are lots of tantalizing restaurants in this LGBTQ-friendly, walkable district, including spots on and just off Main Street and Market Street, like Indian-inspired Bollywood Taco (203 E. Main St. Tel: 423-497-5099. bollywoodtacostn.com) and modern-Southern Flying Squirrel (55 Johnson St. Tel: 423-602-5980. flyingsquirrelbar.com). I had to visit Terminal Brewhouse (1464 Market St. Tel: 423-752-8090. terminalbrewhouse.com) for a to go drink, and I made sure to go to the gastropub’s roof terrace for a perfect photo of the Choo-Choo sign.

My Southside lodging choice was the Common House Chattanooga (1517 Mitchell Ave. Tel: 423-771-9925. commonhouse.com/chattanooga), newly opened in an historic YMCA building. It serves as a big membership club for locals, but its hotel guestrooms are available to non-members and come with all the membership perks, like access to pool, fitness center, lounge, and co-working spaces.

This visit to Chattanooga also gave me a new perspective on the local community’s pride in its cultural heritage, an encouraging discovery considering the city’s conservative Southern context. My love for music and history/herstory brought me to the Bessie Smith Cultural Center and African American Museum and Performance Hall (200 E. ML King Blvd. Tel: 423-266-8658. bessiesmithcc.org), where I walked through local history starting with the native Cherokee tribes and early stories of slavery in Tennessee.

Exhibits at “The Bessie” share the African-American experience through individual stories, folk art, photos, letters, and recreated street scenes and vignettes that incorporate period artifacts. The exhibits culminate in stories of modern race relations, from President Obama’s election to the Black Lives Matter protests. An adjoining gallery and performance hall shares more on Bessie Smith’s life and fame as the “Empress of Blues.” 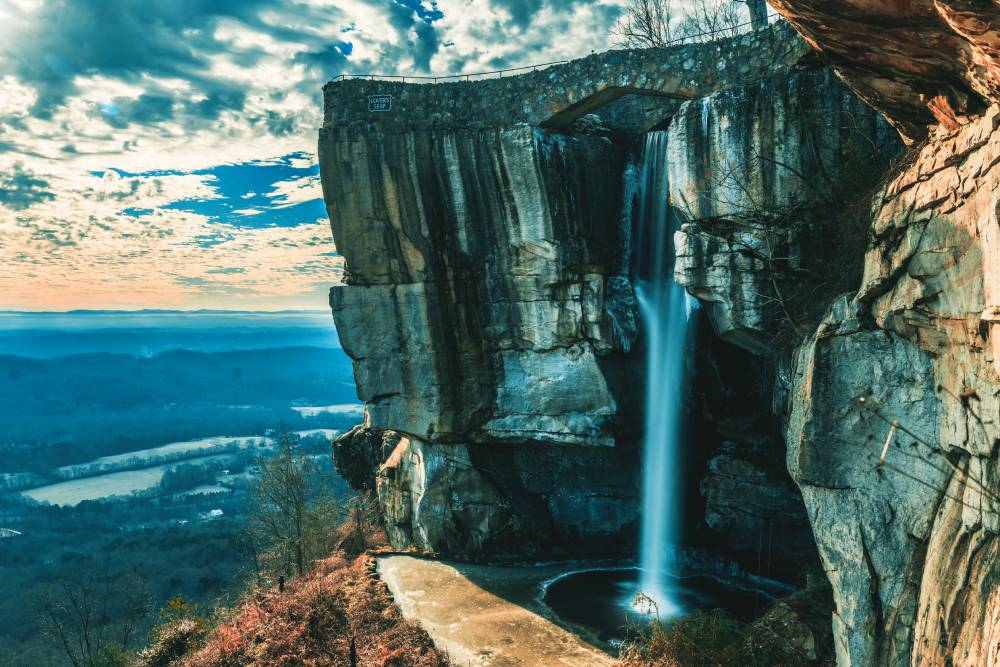 As a visitor, I enjoy that the city is friendly and fun and invites exploration. As an American, I appreciate even more that Chattanooga is a heritage destination that’s boldly evolving.

Smith was openly bisexual, but the museum focuses more on her incredible contributions to blues and jazz music, honoring her with education, arts programs, and regular events. I’m excited to hear what’s ahead for The Bessie’s Phase II opening, which is focused on Chattanoogan African-American entertainers.

The Bessie stands out for presenting America’s grim legacy of racial injustice through honest, intimate stories of local victims and heroes. There are other city landmarks that similarly commemorate the darker parts of Chattanooga’s past, helping visitors remember the hardships, and hopefully carry them forward to build a brighter future.

One is Ross’s Landing (visitchattanooga.com/listing/rosss-landing-chattanooga-pier/1146) on the Riverwalk outside the Tennessee Aquarium. It commemorates the 19th-century Cherokee-Nation Chief John Ross with a “weeping wall” waterfall representing the forceful removal of Native Americans during the 46-year-long Trail of Tears.

Up the river, follow the iconic Walnut Street Bridge to its south landing to reach the Ed Johnson Memorial (edjohnsonproject.com), an understated public installation that reveals much about this city. In 1906, the falsely convicted Ed Johnson was lynched on the bridge by a white mob, in part angry over an historic Supreme Court ruling meant to safeguard him. Through markers that tell the story and bronze statues of Johnson and his courageous African-American attorneys, the tragic event and Johnson’s life are powerfully commemorated here beside that trellis bridge. For me, the memorial demonstrates that the city itself wishes to honor Johnson and continue the fight for civil rights and justice. 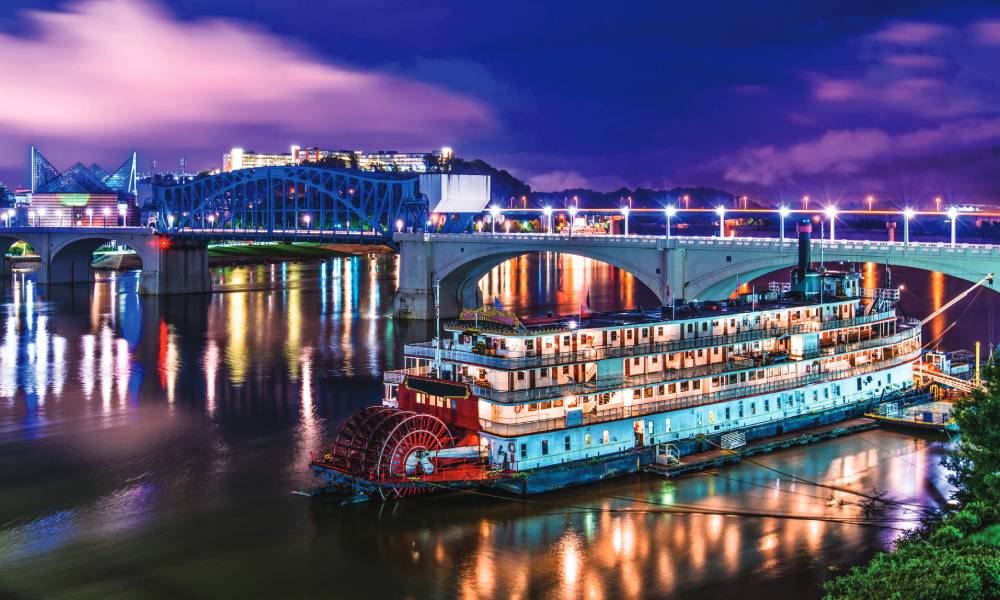 Downtown Chattanooga and the Tennessee River (Photo by Sean Pavone)

Exploring the city and speaking to locals like Scottie Bowman, a hometown entrepreneur who’s out and proud, I learned that Chattanooga has come a long way over the past few decades to embrace its diverse population. Bowman opened The Big Chill & Grill (103 Cherokee Blvd. Tel: 423-267-2445. bigchillchatt.com) in 1997, not necessarily as an LGBTQ hangout, even though it became one anyway as a “safe place for the gay community to gather.”

Her second restaurant, Scottie’s on the River (491 Riverfront Pkwy. Tel: 423-269-7487. scottiesontheriver.net), is likewise gay friendly, with a supportive clientele who, she says, were key to helping both businesses survive the pandemic’s low points. Both the Big Chill and Scottie’s host live events like drag-queen bingo and brunch parties, karaoke, and bands that pull in LGBTQ guests and “a melting pot of people,” Bowman told me.

Bowman says June’s Riverbend Festival (riverbendfestival.com) is a favorite way to kick off summer, though she’s long been a supporter and sponsor of the annual fall Chattanooga Pride festival (chattanoogapride.com), aka Tennessee Valley Pride, which puts on events all year.

Chattanoogans, I’ve learned, prize both arts and nature, and both are easy to find. In the Bluff View Art District, marked on one end by the Walnut Street Bridge, a gallery district with cafés and little parks invite artsy walkabouts. But the Hunter Museum of American Art (10 Bluff View. Tel: 423-267-0967. huntermuseum.org) is the shiny cliffside gem here, filling out a converted century-old mansion, the 1970s east wing, and 21st-century west wing overlooking the river. 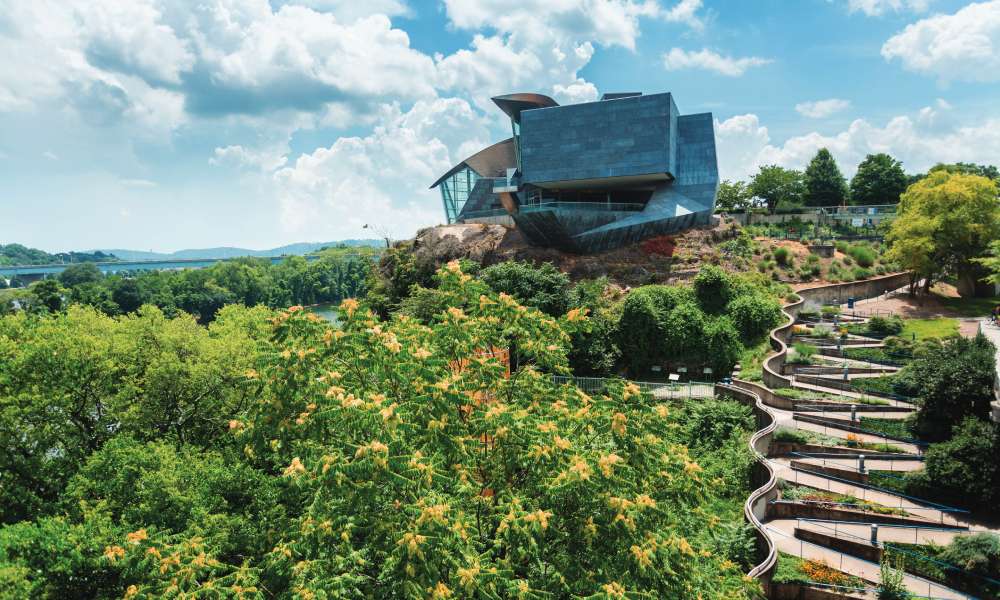 The collection is as impressive as the views, representing American talent from the Colonial era to today. Find a great variety of works here by Jasper Johns, Helen Frankenthaler, Thomas Cole, Jenny Holzer, and Sally Mann, along with works by LGBTQ artists including Marsden Hartley, Paul Wonner, Whitfield Lovell, and Nick Cave.

Chattanooga’s magnificent natural setting is key to its nickname, Scenic City. The Riverwalk and Stringer’s Ridge are easy-access ways to view the scenery from river to peaks, but Lookout Mountain (1400 Patten Rd. Tel: 706-820-2531. lookoutmountain.com) is more famous for its trio of attractions all just a jaunt to the south end of town near the St. Elmo neighborhood.

Personally, I can’t resist a funicular, so my first visit was to the 125-yearold Incline Railway for a crazy steep ride up to the Lookout observation decks. At Ruby Falls, I entered a cavern within the mountain and descended 260 feet to lay eyes on one of the country’s “tallest and deepest” underground waterfalls—a must for anyone who loves a natural spectacle. 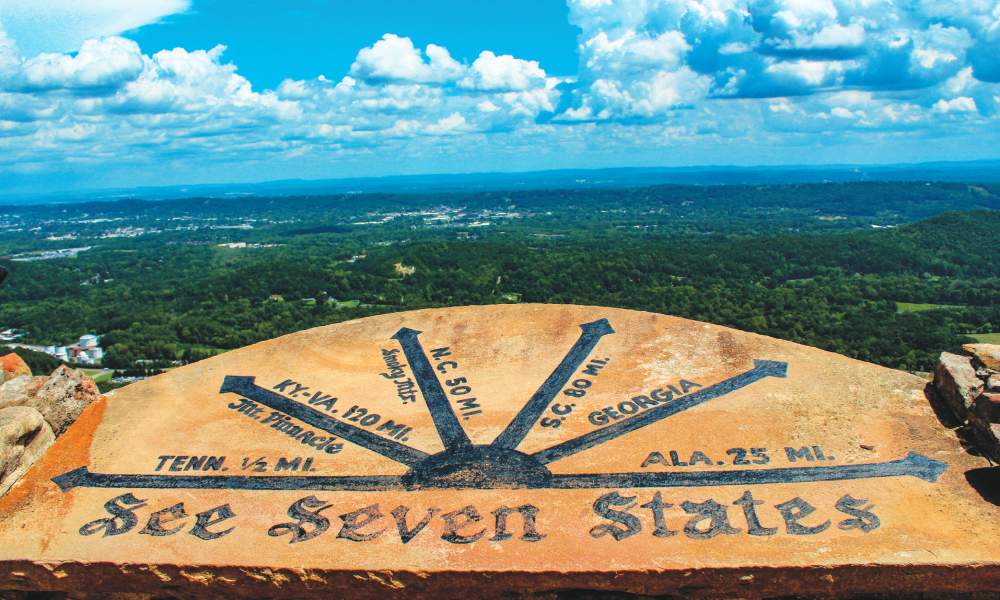 Rock City capped off my Lookout time, where I got to check out massive ancient rock formations, taking in gardens with seasonal blooms and the quirky Fairyland Caverns. One of Lookout’s famous overlook points is a marker with arrows to “See Seven States From Here.” I think about that spot often since it seems impossibly rare to have such a panorama. It was a key position during the Civil War, when the 1863 Battle of Lookout Mountain brought defeat to the Confederate forces. It was a turning point that shored up both Chattanooga and Tennessee for the Union.

Then I think about Scottie Bowman’s take on Chattanooga as a “Bible Belt city” with an open-minded streak, home to a diverse community that’s shoring up its progressive style. As a visitor, I enjoy that the city is friendly and fun and invites exploration. As an American, I appreciate even more that Chattanooga is a heritage destination that’s boldly evolving. There is an atmosphere of growth here, a common interest in getting stronger together. Considering its storied past, Chattanooga seems to be on the right track. 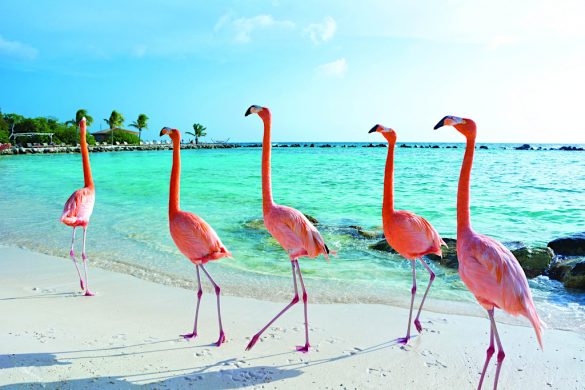 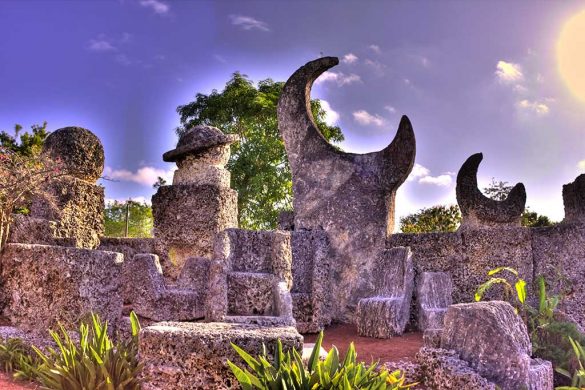 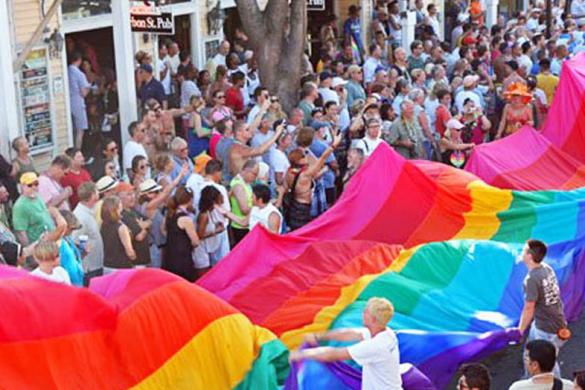 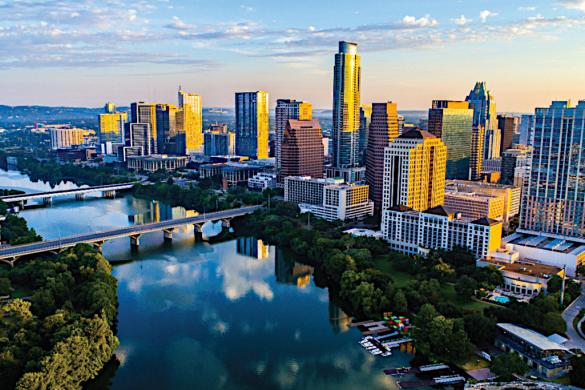