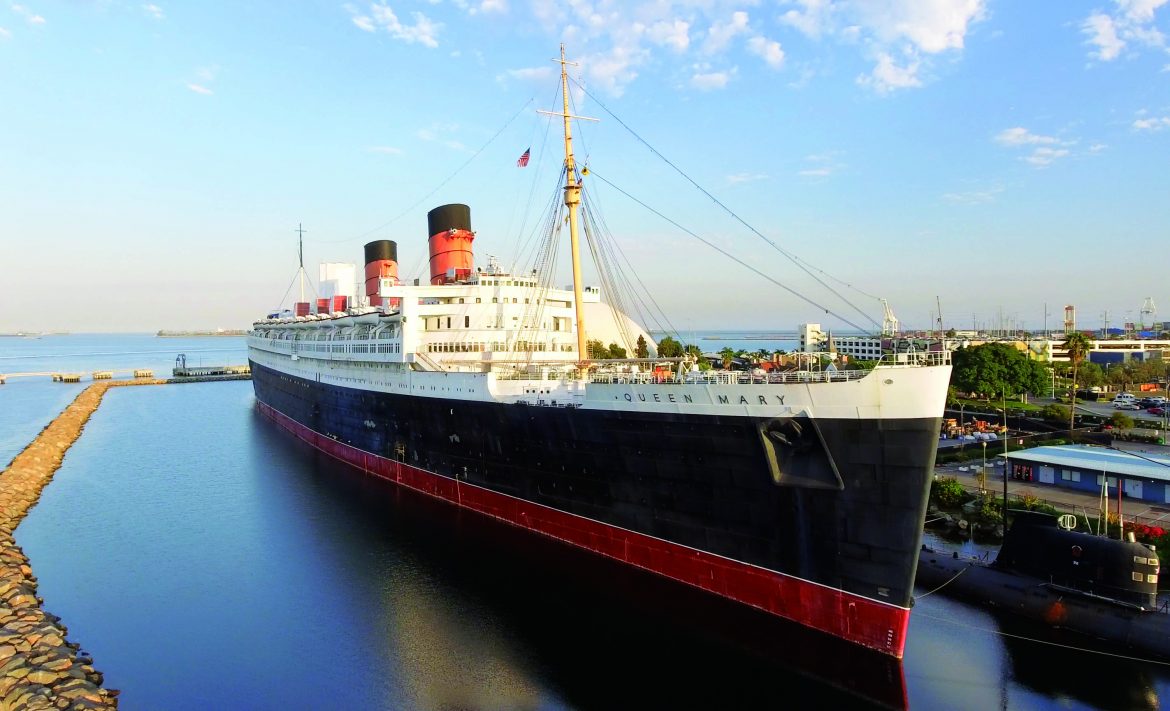 Long Beach just might be the West Coast’s new queer capital. Yes, it’s a bold claim, but there’s evidence to prove it.

Is Long Beach the New LGBTQ Capital Of California?

My first piece of Long Beach advice? Don’t actually plan a vacation around the beach. While it may in fact be lengthy (5.5 miles to be exact), thanks to offshore oil rigs and a breakwater preventing ocean waves a popular gathering place for sunbathers Long Beach is not. A young barista bestows this wisdom upon me while handing out fluffy egg sandwiches and thick slabs of French toast to the morning rush at downtown’s Recreational Coffee (237 Long Beach Blvd. Tel: 562-436-4954. www.recreationalcoffee.com). “Long Beach,” she says, “is for eating, drinking and hanging out.” I thank her for the advice, regret the two-dozen Speedos I’ve packed for the weekend, and order my coffee to go.

To avid Southern California visitors, Long Beach, a South Bay city of a half million people only 25 miles from downtown Los Angeles, is instantly familiar. Look east and you’ll see a mountainous horizon framed in the foreground by an army of super tall palm trees lined up symmetrically like a row of golf tees. Look west and there’s the Pacific Ocean. Look everywhere else and you’ll see stucco homes with Spanish tiled roofs, too many Del Tacos and a familiar reliance on the automobile. But look a little closer and you’ll see something else…a whole lot of gay people.

Long Beach just might be the West Coast’s new queer capital. Yes, it’s a bold claim, but there’s evidence to prove it. Stroll the leafy Long Beach Promenade, a greenway slicing right through downtown and flanked by loft buildings, hip eateries and designated pickup and drop off spots for electric scooters, and you’ll see same-sex couples and hot daddies galore out walking their dogs. The greenway comes to an abrupt end at Harvey Milk Promenade Park and Equality Plaza, the first park in the nation named for the slain gay civil rights icon. The park is striped in rainbow colors and a downloadable phone app brings Milk’s story to life via augmented reality. 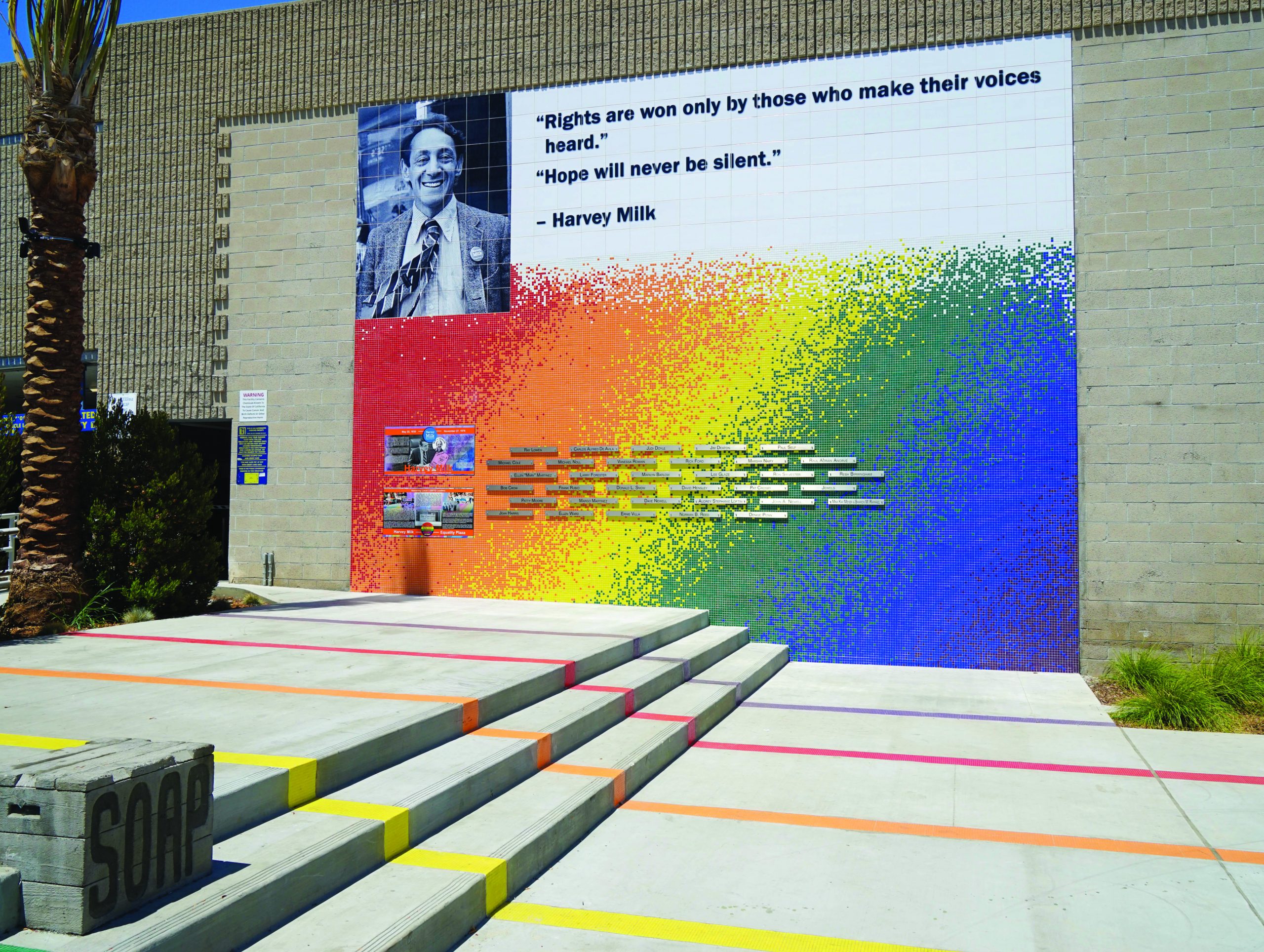 To get my bearings, I head to brunch at the Hotel Maya (700 Queensway Dr. Tel: 562-435-7676. www.hotel-mayalongbeach.com). Long Beach is a harbor town after all, and dining al fresco at the hotel’s Latin eatery Fuego reveals panoramic views of the Queen Mary, Parker’s Lighthouse, the Astronaut Islands (manmade oil derricks), and the colorful tourist hangout Shoreline Village. Nearby, a large geodesic dome that once housed aviation legend and movie mogul Howard Hughes’s aircraft the Spruce Goose now serves as the Long Beach Cruise Terminal. The views here are perfect and so is my strawberry basil cocktail and seafood crepas which are tightly rolled to resemble enchiladas, but stuffed with a creamy filling consisting of shrimp and large chunks of crab meat.

In fact, the Hotel Maya itself is something of a local icon. It helps that it’s located harborside, but there’s also the fact that guestrooms are housed inside a series of buildings shaped to resemble Mayan pyramids and are flanked by a bougie pool area and outdoor common areas boasting fire pits. In the lobby, order a cocktail and the bar will deliver it to you via dumbwaiter.

Long Beach is one thing other Southland cities are not—compact and manageable—and before I know it I’m on an electric scooter and whizzing out of downtown via the Broadway bike lane past salons, corner markets, taquerias, craftsman homes adorned with rainbow flags and gay bars. My destination is Retro Row, a hub of funky and vintage shops clustered around 4th Street and Cherry Avenue. Here, there are stores like Moxi Roller Skate Shop (2132 E. 4th St. Tel: 562-434-8488. www.moxilongbeach.com), which is decked out in Pride colors. I stroll past the Art Theatre of Long Beach (2025 E 4th St. Tel: 562-438-5435. www.arttheatrelongbeach.org), a restored 1920s theater which screens oldies and documentaries and I pass The Center Long Beach (2017 E 4th St. Tel: 562-434-4455. www.centerlb.org), which offers health, legal and social services, seminars and workshops, and hosts annual events for the LGBTQ community. 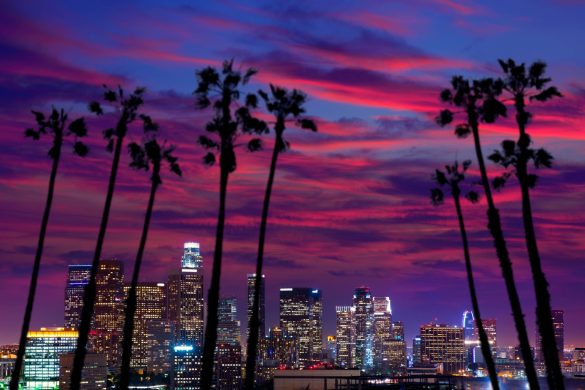