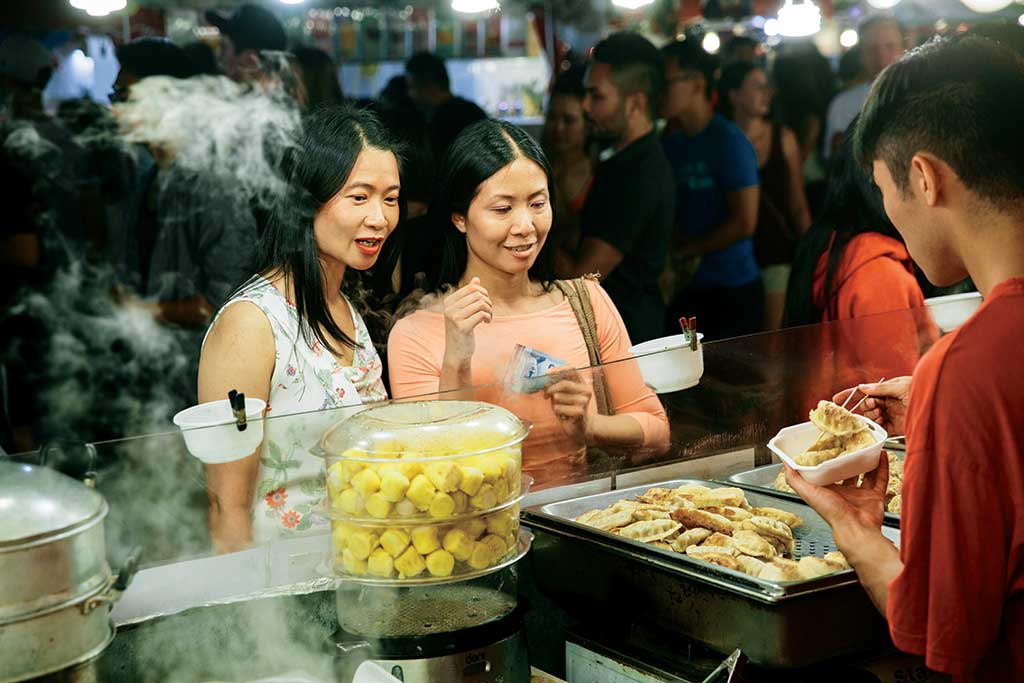 Many gay travelers have been to Richmond without even knowing it. If you’ve ever flown into Vancouver, one of Canada’s most popular LGBT destinations, you actually landed in Richmond, where the “Vancouver” International Airport is located

The camera eats first!” insisted the alpha-teen at the table next to me when a waitress arrived and lifted the lid from a bamboo basket of steaming shrimp dumplings, confettied with fragrant green snippets of chive.

Forty fiercely painted fingernails reluctantly reversed direction and withdrew as their queen bee moved her iPhone to catch just the right angle, sliding water glasses and cutlery out of view to frame the impend- ing tastiness just-so. “Come on,” com- plained one of her gaggle, “I’m hungry!”

Richmond, British Columbia, on Lulu Island, is the only place in the world where the visitors’ bureau has officially adapted “The camera eats first” as a tourism slogan, urging locals and out-of-towners alike to flood blogs and social media with mouthwatering imagery.

Success was pretty much guaranteed from the get-go. With the largest Asian population in North America and over 800 restaurants, Richmond provides easy access to a world of alluring, sometimes unfamiliar foods for American travelers without the time, budget, or adventurous- ness to manage trans-pacific travel. 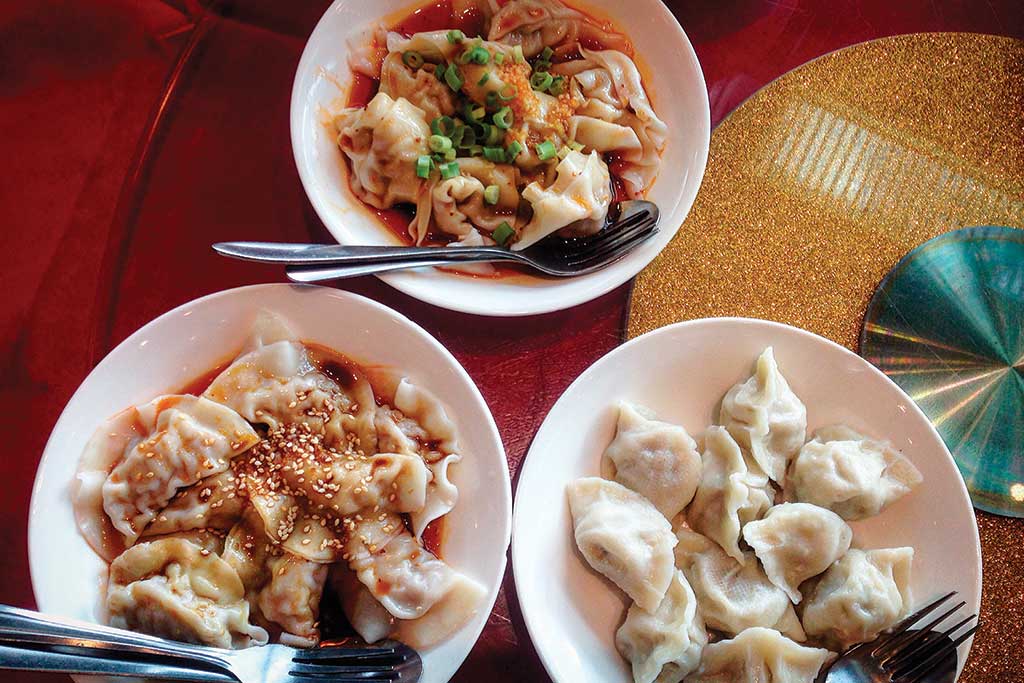 Many gay travelers have been to Richmond without even knowing it. If you’ve ever flown into Vancouver, one of Canada’s most popular LGBT destinations, you actually landed in Richmond, where the “Vancouver” International Airport is located. Just a 30-minute car or public train ride from central Vancouver, its a must-do on any Vancity vacation. And if you’re a culinary adventurer, Richmond easily merits a dedicated long weekend trip of its own. Richmond is ready for its close-up, Mr. Delicious.

To get the most from a visit to Richmond, you’ll want to give your tastebuds a tour of the city’s greatest hits. Instead of settling into a single restaurant for each meal, take advantage of some of the city’s more unusual eating opportunities:

The Dumpling Trail (www.dumplingtrail.com) consists of over 20 different restaurants and vendors, most within walking distance of each other. While many of their menus appear to offer the same dishes, culinary curators at the Richmond visitors’ bureau have identified signature standouts at each address. Proprietors are happy to have guests drop in for just a plate or two before moseying along to the next course.

One trail-trekking strategy is to compare and contrast the dumpling styles of different culinary traditions. Start with the stellar squirters at R&H Chinese Food (Lansdowne Centre Food Court. 5300 No. 3. Rd. Tel: 778-297-5668), where Shanghainese favorite xialong bao are steamed to order. Commonly referred to in English as soup dumplings, xialong bao are made by pinching thin dough wrappers around minced pork and a spoonful of gelatinized pork aspic, which melts into a silky, fat-infused broth as the dumplings are steamed. This is one dish that it really makes sense to photograph before eating, as a few minutes cooling time is highly recommended. As the menu board notes in red: “Caution: Hot juice inside.” 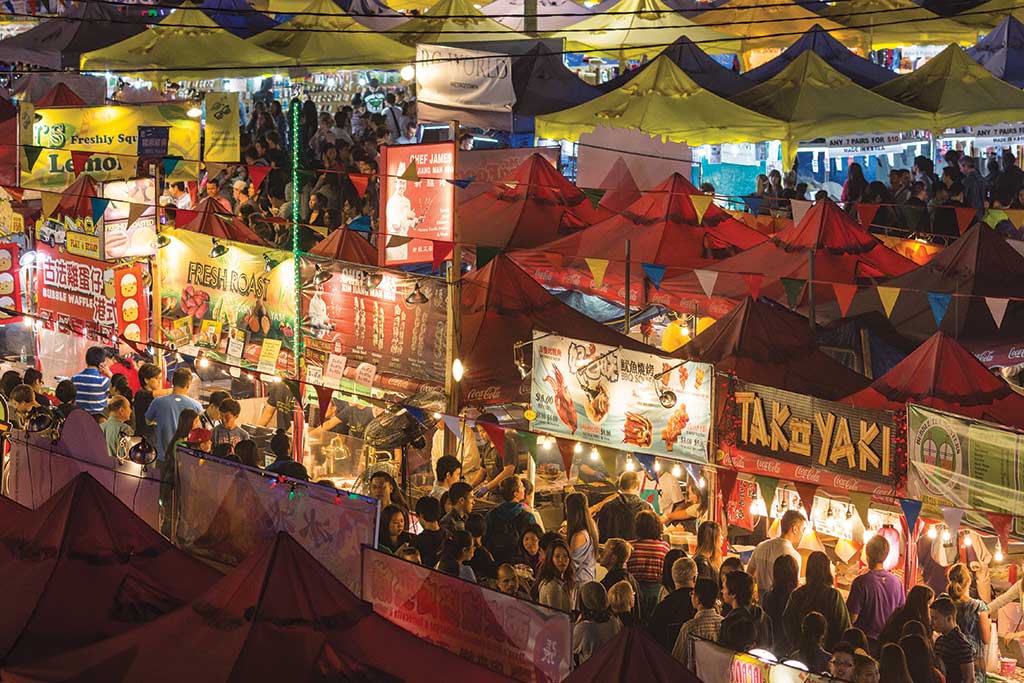 The Japanese gyoza at Shibuyatei (125-2971 Sexsmith Road. Tel: 778-297-1777), a tiny corner store operation tucked alongside a carwash, will put your Trader Joe–assisted home cooking to shame. Circles of almost paper-thin dough are folded and pleated around freshly minced pork, diced shrimp, or, on occasion, a special chopped scallop filling. Then, they are pan fried on one side only, providing a golden, crisp counterpoint to the slightly elastic chew of the remaining portion of the wrapper, which is quickly steamed when a small amount of water is added to the pan. Drag them through a puddle of dark soy sauce and sesame oil for a perfect combination of crackle and chew.

Korean’s dumpling darling is the mandu, exemplary renditions of which are on offer at Samsoonie Noodle and Rice (140-8211 Westminster Highway. Tel: 778-297-7788). With thicker skin and heartier, more roughly chopped fillings, these meaty dumplings (shaped vaguely like old school nurses’ caps) are best enjoyed steamed with a side dish of spicy kim chi. The combination of pepper heat, warm meat, cool cabbage, and the soothing neutrality of the wrapper dough pro- vides a lively mouthful of intermingled tastes and textures.

Over 50% of Richmond’s population identifies as ethnically Chinese and the most commonly found dumplings in Richmond are the staples of Cantonese dim sum. But don’t settle for a common version of any of them: the juiciest har gow (shrimp steamed in a thin-as-possible veil of tapioca starch pastry) are at Empire Seafood (200-5951 No. 3 Rd. Tel: 604-249-0082. www.empirerestaurant.ca).

The ham sui gok at Parklane Chinese Restaurant (200-7997 Westminster Highway. Tel: 604-273-0888) are served hot from the fryer, their crackling outermost surface yielding to a toothsome elasticity thanks to the combination of wheat starch and glutinous rice flour; at the bottom of their mostly hollow insides, these egg- shaped indulgences have a garlicky “yolk” of minced pork and vegetables.

You can rely on either of the above establishments to do noble double duty with their fun gor, which mix the surprising crunch of roasted and ground peanuts into a savory mash of pork, shrimp, mushrooms, cilantro, and finely diced water chestnut, all held in a tidy white parcel of dough. 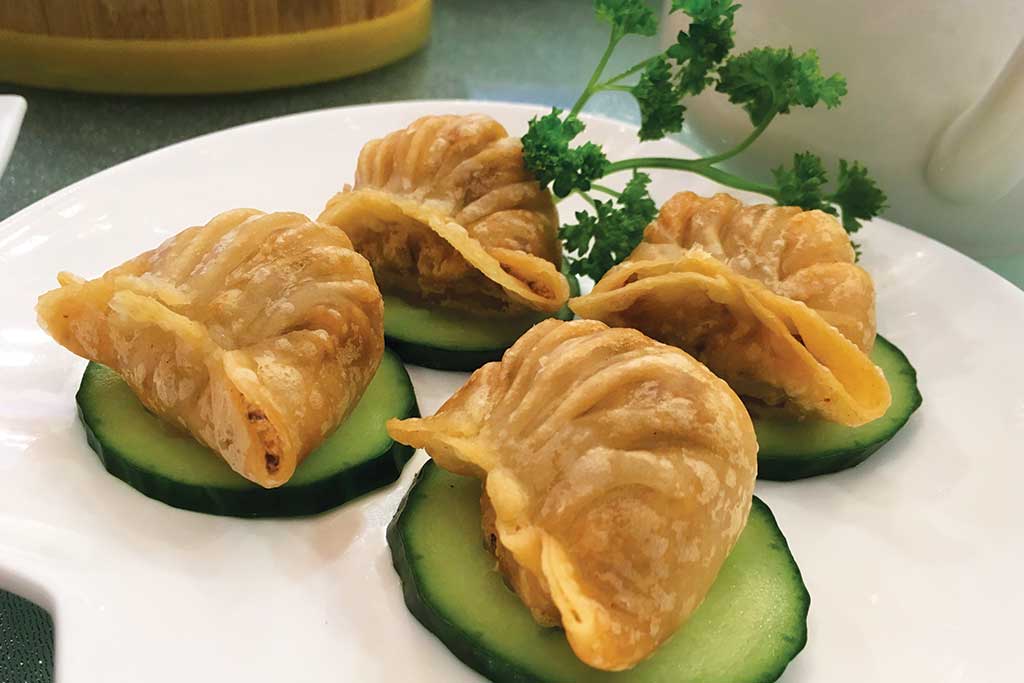 If you can’t spare a few hours wandering from mouthful to mouthful, you could do worse than to settle in for a full dim sum brunch at Chef Tony Seafood Restaurant (Empire Center Mall, 4600 No. 3 Rd. Tel: 604-279-0083. www.cheftonyca.com). Unlike Dumpling Trail venues, which tend toward hole-in-the-wall décor or slightly clichéd Chinoiserie, Tony’s modern dining rooms have brightly colored super-graphics and unusual sculpted textures on their walls. It’s in keeping with the kitchen’s unusually refined, contemporary tweaks of tradition. A stylish young Asian-Canadian crowd reserves ahead to enjoy the likes of pork and shrimp siu mai elevated by the a sprinkling of black truffle, flaky tartlets filled with egg yolk and mushrooms, and a version of bao, the traditional barbecued pork buns found in Chinatowns the world over, with a crisp, baked-on glaze.

Change up the flavors and take pictures of something other than food in Richmond’s scenic waterside neighborhood, Steveston (www.historicsteveston.com), where the mouth of the Fraser River flows into the Georgia Strait of the Pacific. Once the site of a major fish cannery, over 500 commercial fishing vessels still work out of the Steveston harbor, and the local seafood is first rate.

Walk down a ramp to the marine version of a farmers’ market, where local fishermen tie up and sell their catch from atop glistening piles of ice heaped on the backs of their boats. Browse silvery salmon, whiskered blue-spot prawns, and snappy crabs alongside Richmond restaurateurs and treat yourself to fresh sea urchin, scooped by the fingerful from a spiny half-shells.

On the pier, it’s hard to resist the aroma of fish and chips. At Pajo’s (12351 3rd Ave. Tel: 604-272-1588. www.pajos.com) it’s not just about the frying, its about quality fresh catch as well. On a usual day, you can order your choice of salmon, halibut, or cod. For a slightly swankier alfresco meal on the pier, The Blue Canoe (140-3866 Bayview St. Tel: 604-275-7811. www.bluecanoerestaurant.com) features high-piled raw shellfish platters and an outstanding version of calamari, with piquant slivers of fried lemon rind and jalapeños tossed with tender squid. 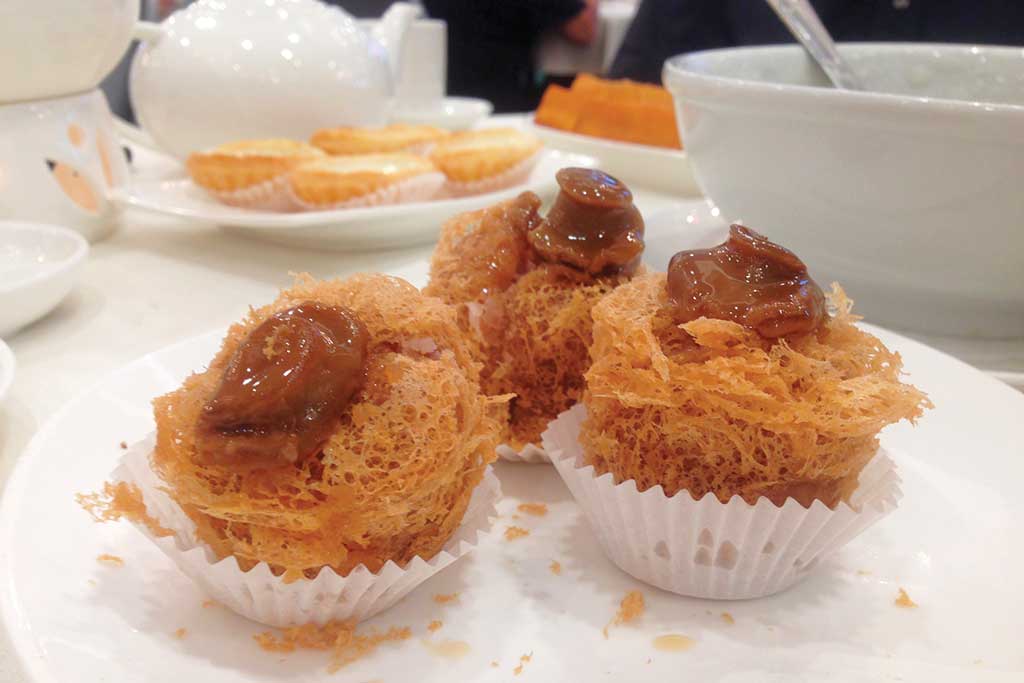 Around the corner, little Steveston Pizza (100-3400 Moncton St. Tel: 604-203-0777. www.stevestonpizza.com) has made a big splash in local media with its pricey special-order pies, including the much ballyhooed “C6” special topped with lobster thermidor, smoked salmon, tiger prawns, and Osetra caviar. It’ll set you back $45 a slice. Or you can try equally inventive, but more modest priced options ($24 for a whole pie) with toppings including shrimp worldeats scampi, brie, figs, and Roquefort mousse.

When you stop playing pizza paparrazo and put down your phone for a moment, you may start to realize that this area feels oddly familiar. That’s because the charming, boutique-filled streets of this village, originally founded in 1880, serve as the set- ting for ABC Television’s popular series, Once Upon A Time, in which Steveston is renamed Storyville.

If you have room for dessert after a day’s moveable feasting, there’s an Asian dessert parlor that’s not to be missed. While bucket-sized cups of creamy sweet boba tea chockful of squiggly gelatinous thingamajiggies seems to have become a go-to treat for urban American teenage girls of all ethnicities, there’s a much more sophisticated option in Richmond.

Snowy Village (8571 Alexandra Rd. Tel: 778-681-7832. www.snowyvillages.ca) features a visually spectacular frozen confection called bing soo, first popularized in Korea. Similar to Hawaiian shave ice, for which blocks of ice are pared into razor thin layers, which are then piled high and drenched with fruit syrups, bing soo is made from giant cylinders of sweetened, frozen milk.

Shaved into flat curls (imagine translucent white ribbons) the frozen milk piles onto itself, creating a soft, snow-like bed, ready to absorb the juice from colorful chunks of fresh mango, pineapple, and melon. 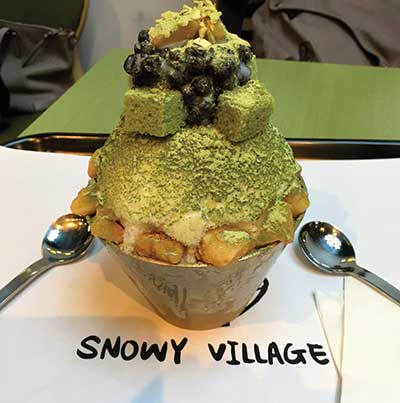 If you skip the optional additions of whipped cream, crushed cookies, and candy bits, bing soo is actually a relatively light, remarkably refreshing dessert. In the age of Instagram, it’s also likely to be a trend five minutes from now.

But unlike at conventional carnivals, the only rides here are the ones that hundreds of specialty food items take from your mouth to your belly. While similar markets are popular in Bangkok, Hong Kong, and other Asian cities, these are the only North American venues that even come close. They attract over a million visitors annually.

Rows upon rows of illuminated vending tents and trailers packed with elaborate kitchens and flat-top griddles fill the air with smoke and spice. Haystack-size mounds of octopus are barbecued to order; potatoes are carved into Slinky-like coils wrapped around wooden dowels and rolled in cheesy, savory powders; fresh fish is chopped into poke bowls, and the fish-shaped Japanese waffles called taiyaki are griddled around wooden spoonfuls of Nutella and chestnut paste.

Cleaver-wielding vendors chop plate after plate of barbecued duck; milkshakes are served in mason jars; every imaginable meat is skewered and grilled to perfection, and in a fusion cuisine meltdown of sorts, Malaysian roti bread is rolled around gooey macaroni and cheese.

Small stages host live music and dance performances, midway games offer the opportunity to win giant stuffed animals (that inevitably get used as napkins), and retail vendors offer more iPhone covers, novelty socks, and refrigerator magnets than you can shake a beefstick at.

Everybody gather round for one last photo now. Just smile and say… urrrrrrrp!