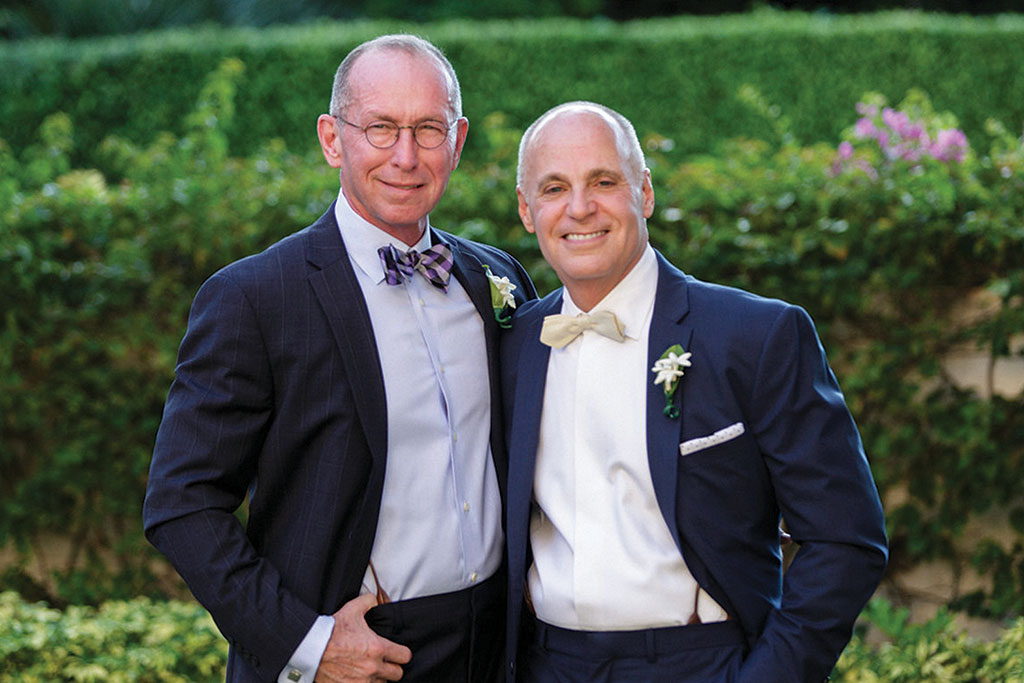 Around this lavishly landscaped, sun-drenched compound there are labyrinthine pathways leading to spacious guest rooms, cottages, villas, and suites that are individually appointed with fancy linens, customized robes, chic pastels, and luxury amenities.

Pineapple Point (www.pineapplepoint.com) has perfected the art of knowing what their guests want before they even know it. Case in point: When I visited a few years ago, it was a pesky Florida afternoon where the skies were grayish, but it was still hot and humid enough that I was getting fidgety while reclining poolside. Before I had time to fully process my own discomfort a cherry popsicle was being offered to me by a smiling staff member. This is just one of many things this luxury, all-male guesthouse in the leafy residential neighborhood of Victoria Park gets right.

Elsewhere around this lavishly landscaped, sun-drenched compound there are labyrinthine pathways leading to spacious guest rooms, cottages, villas, and suites that are individually appointed with fancy linens, customized robes, chic pastels, and luxury amenities. Need a dinner reservation? The concierge will arrange it. Want to relax? More than a half-dozen massage therapists are available at your disposal. Want nothing more than poolside eye candy? There are beautiful, naked men of all ages and body types everywhere. And if you fall in love to the point of wanting to retire here, well, read on to find out how that may soon be possible. 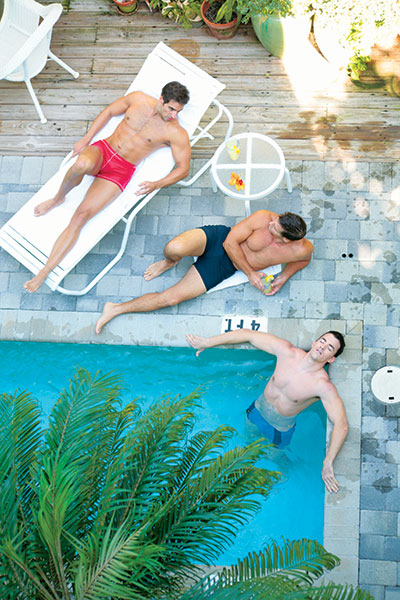 To get the full story on how proprietors and husbands Judd Chapman and Phil Quattrone came to create this heavenly paradise, I spoke with them not once, but twice. Resident house cats Blanche, Rose, and Sophia were unavailable as they were probably poolside at the time soaking up the Florida sun just like everybody else and tacitly encouraging guests to do the same.

HOW DID THE TWO OF YOU MEET?
Phil Quattrone: We met in 1989. I literally had just come out and moved to Fort Lauderdale and met Judd the day that I moved down here. We were like lesbians. We moved in after three days, and here we are 28 years later. Judd had been down here for many years before that. He had a home in Austin and Fort Lauderdale, and he was kind of going back and forth between the two.

HOW DID YOU COME TO OWN A GAY GUEST HOUSE?
PQ: I worked for an airline for 25 years and Judd was a developer, but he also worked in advertising for Bell South. We would go to Key West five or six times a year just because it was an easy four-hour drive, and it was a nice little getaway. Every time we’d go we’d stay at some different places, and we thought, ‘why does gay always have to be sleazy or bad service? Couldn’t this be something better if you had the right equation and you put the right amount of energy into it.’ We kind of had this idea that we could do it much better…move to Key West and buy a guest house and make it this phenomenal resort.

So we went down there and actually put a bid on a place and didn’t get it. We came home (we lived about five houses down from where Pineapple Point is now), and we were walking around the block talking about what we were going to do. We saw this for sale sign by owner, and it ended up being the three physical properties that were the original part of Pineapple Point. Pineapple Point was not a guest house, it was nothing. It was originally run as a flophouse by a guy who happened to own these properties, and who would rent them by the week and by the month.

So we ended up buying these three pieces of property. The main property we discovered had a bed-and-breakfast license from the late 30s so that’s what gave us our licensing. We started to renovate the main building and opened up five actual rooms in 1999. We quit our jobs, we sold all our investment properties, and we cashed in our 401Ks. Our friends thought we were nuts. We jumped into this headfirst.

WHAT WAS FORT LAUDERDALE LIKE AS A GAY DESTINATION AT THAT TIME?
Judd Chapman: I used to come down here on spring break from the University of Kentucky, and I was here with my girlfriend and ended up at a hotel called the Marlin Beach where I had my first gay experiences. There has been an influx of gay people [to Fort Lauderdale] in the last ten or 15 years, but it’s always been a huge haven for gay guys. I don’t know what the draw is other than sun and sand, but especially the downtown area, Victoria Park, and Wilton Manors it’s just a huge gay mecca. 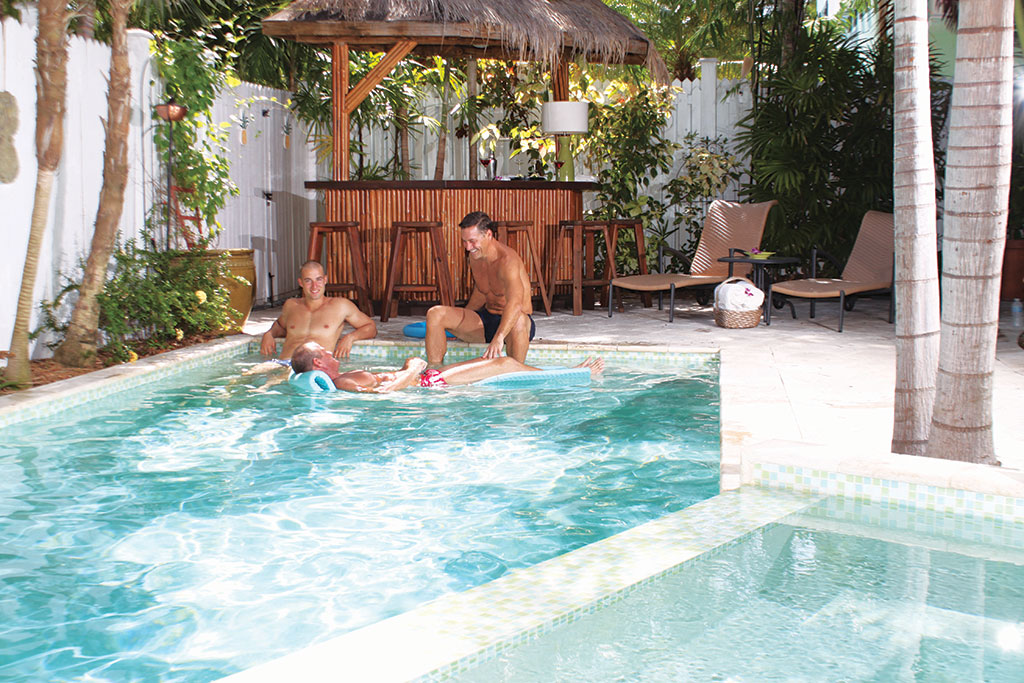 WHY DID YOU CHOOSE THE LUXURY MARKET?
PQ: We’ve been a lot of places together, and we always like to make the experience a high-end [one]. We didn’t see that market in Fort Lauderdale. And we thought, when you do the math of (the gay traveler) it’s typically two guys who bring in some good money and good salaries (35–60 year old guys who’ve done well in life and can afford to spend on higher travel accommodations).

WERE YOU SCARED TO BE CLOTHING OPTIONAL INITIALLY?
JC: That’s still a tricky question for us because a lot of people who have never stayed at a gay resort, they get a recommendation from one of their friends, but the person will say ‘I’ve heard it’s clothing optional’, and they immediately think sexual. That’s the last thing we are. It’s still a challenge to us to explain it to a lot of people who are still a little apprehensive about that.

PQ: I think once we get somebody here for the first time and they see what it is and what that clothing optional means, it definitely is a plus, but we also had to do it to compete because anyplace that’s all-male that can be clothing optional in Fort Lauderdale is.

WHAT IS IT THAT SETS PINEAPPLE POINT APART FROM THE OTHER RESORTS?
PQ: It’s our staff. We try to never say no— with few exceptions. There’s nothing we can’t do, there’s nothing we can’t get, there’s nothing we can’t make happen. We have everything from deluxe king rooms to three level private villas. We have over a million dollars in landscaping. We have through-the-roof amenities that other places don’t have. When it comes down to it at the end of the day people love that stuff, but it’s all about the staff. We hear it time and time again ‘your staff is phenomenal. Your staff is the best.’ That’s why our Trip Advisor rating is #1 for over 580 hotels in Fort Lauderdale including the RitzCarlton and the W hotel. 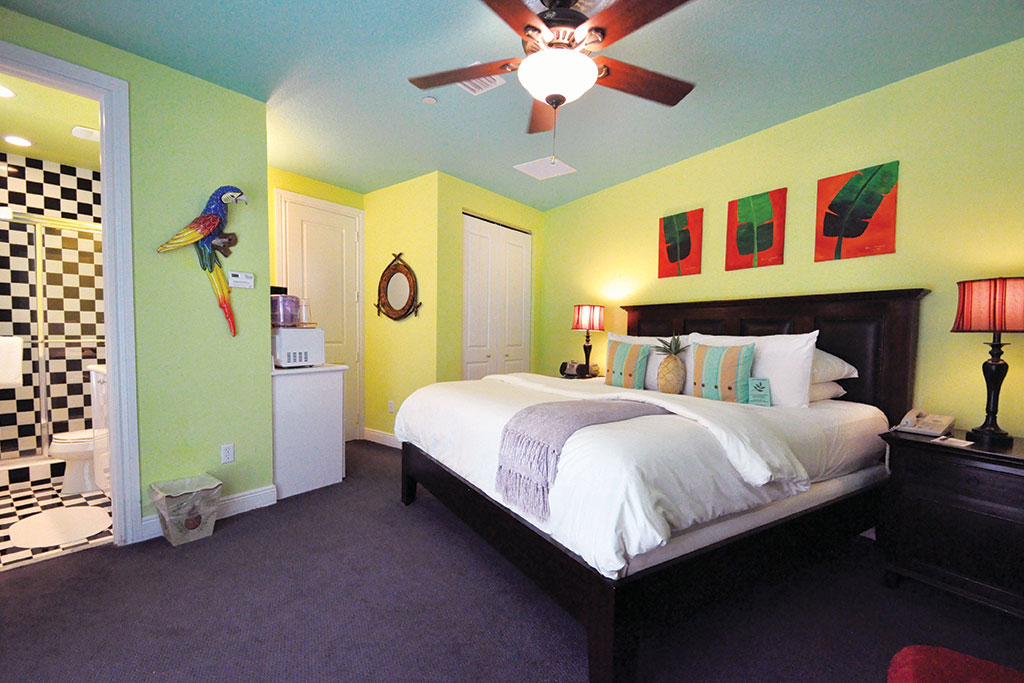 WHAT GUEST COMMENT PUTS THE BIGGEST SMILE ON YOUR FACE?
JC: It’s what they don’t say that puts the biggest smile on our face because we leave comment cards in the room and it goes from one to ten and you circle that and we get a lot of those. If we get a nine out of ten, which most people think is fantastic, we call a manager in and we ask what did we do wrong to not get a ten.

PQ: The biggest reward we get is that we have such a huge repeat customer base. It’s just amazing how large that customer base is and that spreads, because you go back home and (next time) bring new people with you to the experience. So that huge return customer base brings new guests.

WHAT’S NEXT FOR PINEAPPLE POINT?
PQ: Pineapple Point will continue to be here. Operationally in the last couple of years we’ve seen a huge increase in business and revenue, so all these years or providing a great service and product is finally paying off. We are now involved in the next project, which is an LGBT senior living project called Pineapple House (separate from Pineapple Point). Pineapple House, the first of which will be in Fort Lauderdale, is a state-of-the-art, $60 million [endeavor].

JC: This is not a conceptual thing. We’ve been working on this for over four years, our land has been purchased, and our plans have been completed…

PQ: We’re basically shovel ready. We’re hoping to break ground by year-end on the first project, which will be here in Fort Lauderdale. It’s been a long time coming. We’ve actually partnered with two dear friends, a married straight couple who are on the development end. We’re the two gay guys in the room, and it’s our brand that will bring Pineapple House to fruition.