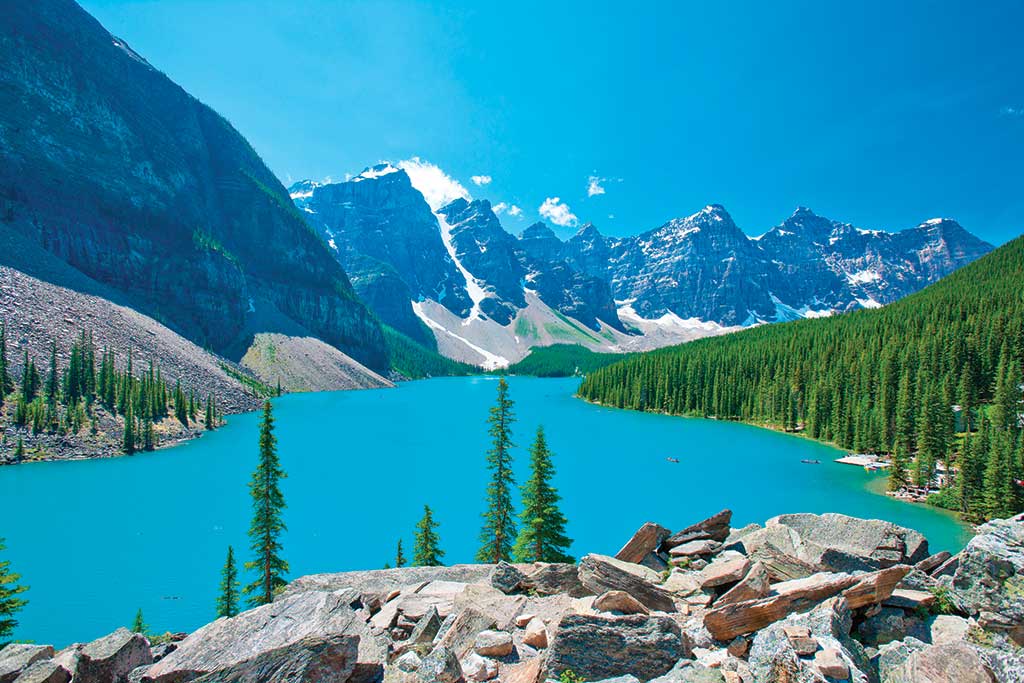 It’s tough saying goodbye to the Rockies, but I am excited to see my teammates as I begin the 3.5-hour drive to Edmonton for the International Gay & Lesbian Aquatics (IGLA) 2016 championships. More than 400 athletes are coming from around the world, including a contingent from Uganda. The latter had their flights sponsored by IGLA, are staying in hosted housing, and were arrested at a Pride pageant in their home country just days before. Among them is Clare Byarugaba, who I meet during the IGLA opening ceremonies at city hall. She changes the topic from identity politics to my Toronto baseball cap. “My girlfriend taught me about the Blue Jays. She’s Canadian.”

The fact that IGLA Edmonton has gone to such great lengths to make the event accessible to a team from a country where homosexuality is illegal is impressive. The city itself reflects the same spirit. This year the Edmonton Oilers was the first team in the NHL to use rainbow tape on their sticks in solidarity with the LGBTQ community. During the opening speeches, Member of the Legislative Assembly Michael Connolly respectfully acknowledges our presence on Treaty 6 First Nations territory, then points out that the current left-leaning NDP Albertan government has three openly gay members, including Alberta’s first out cabinet minister, and Connolly and many of his colleagues have opted to use gender-neutral pronouns in the legislature. 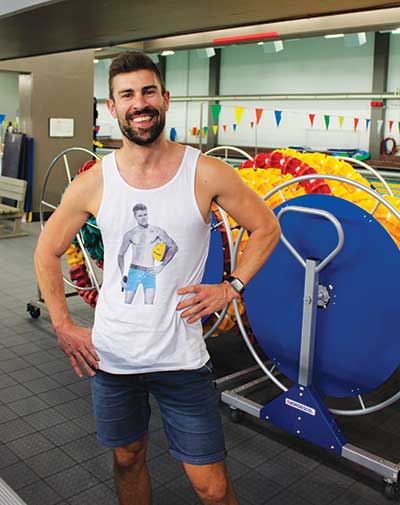 I speak with him afterward about the city and the province’s appeal as a tourist destination. “Everyone sees us as the Texas of the North,” he says. “And we’re not anymore. We are open for queer tourism.”

For the next five days my home base is downtown’s contemporary Chateau Lacombe, where I have an amazing view of the North Saskatchewan River and Valley, as well as the glass pyramids of the city’s botanical gardens.

In the Old Strathcona District I eat at the aptly named barbecue restaurant Meat. My friends and I sit at picnic style tables on the patio, ordering beef brisket, a full rack of ribs, and the pork special. After “the waiter with the biceps and hipster glasses” poses for a pic, we devour our food, making full use of the homemade mustard and barbecue sauces. “People have asked to buy the sauces to take home,” our waitress tells us, “But they just have to keep coming back if they want more.”

We walk off dinner by wandering through the Edmonton Fringe Festival, which is in full theatrical swing across the street. It includes plays like Never Swim Alone, written by openly gay playwright Daniel MacIvor, and Rear Entry, an improvised puppet show. We watch street performers, including a woman who pauses in her fire act to yell, “that woman who took all the pictures, you come back and pay! I know you speak English!”

My second Edmonton food recommendation is the Duchess Bake Shop. When I imagine a private tea room for Kate and William, it looks like this: a chandelier hanging from wood-paneled ceilings, colorful baked goods in an L-shaped display case, minimalist white walls with a few objects d’art, and a hipster behind the counter with a jaunty moustache. I get a box of macaroons to share with my teammates back at the pool. Two of my fellow Triggerfish are originally from Edmonton, and they squeal the moment they see the Duchess box in my hand.

I’m loving the food, but this is Alberta, which also means nature and thrill seeking, so I drive 45 minutes from downtown to Elk Island National Park. There are hikes, camping, and canoeing options.

I cruise through the park with my Parks Canada guide and “furtrader historian” Lauren Markewicz, observing a group of bison grazing along the dirt road. She recommends doing this loop in the morning or evening, for the best chance of sightings.

“There used to be an estimated 30 million bison from Alaska to Mexico,” she says. “In one human lifetime they went down to 1,000.”

Elk Island has one of the few pure genetic herds left in the world. She shows me the handling facility, which is a series of gates and pens for passively corralling the bison every two years for transferring some of the population, primarily to other conservation sites. Their methods are based on the work of famed animal behaviorist Temple Grandin. The process can involve a lot of sitting and observing, but Lauren doesn’t mind. “They’re such peaceful animals to watch.”

If cramped for time, one doesn’t have to leave the city to get a taste of nature. A few blocks from the hotel is easy access to Louise Mckinney Riverside Park, which is the gateway to the valley, the North Saskatchewan River, and 93 miles of trails. I take a scenic Segway tour with the River Valley Adventure Company. Alongside the river are lampposts with poetry in a variety of languages inscribed on metal plates. The company also rents bikes, which I would recommend so you can cover more ground and explore the trails on your own.

My most thrilling excursion is to the West Edmonton Mall. It’s 5.3 million square feet, has two hotels, an ice rink, black-light mini-putt (the crystal maze freaked me out), an amusement park, and a truly kick-ass water park. At the latter, there is some eye candy, but not a Speedo in sight. On one slide, I step into what looks like a capsule, and the trap door at my feet literally drops out from under me, sending me shooting through a loop and seconds later into a shallow pool at the bottom. As I pull my swim shorts from my butt, I agree with the kid who comes after me, who says in awe “That was awesome.” 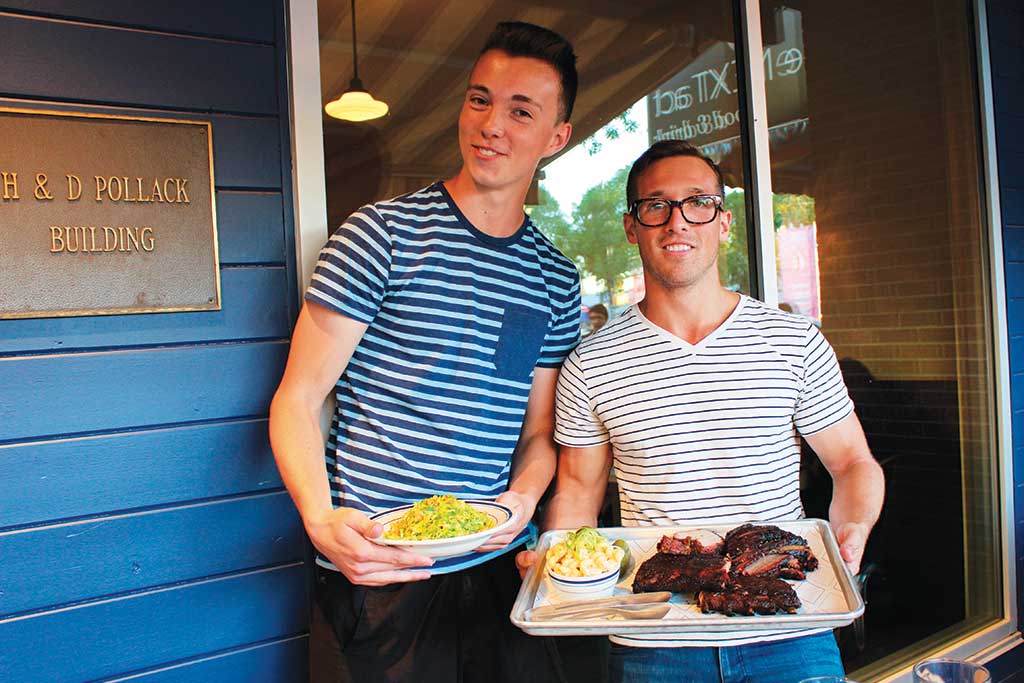 The Waitstaff At Meat Shows Us Their Racks

I bob around the wave pool for a bit, and then it’s time to head to the public pool at the Kinsmen Centre for some real games. By the end of an exhausting day my team’s pulled ahead and qualified for the gold medal match in the recreational water polo division.

The next morning, I seek my Zen at the 104th Street Saturday Farmer’s Market. There are lots of berries and other local produce, along with farm-fresh lamb and regional bison. I pick up some glutenfree/vegan mini-cupcakes from B Healthy Foods, and after an intense game that comes down to a sudden death shoot-out, I share them with my gold medal teammates.

Of course, no queer event is truly over until the closing party. Tonight, at the special events venue Starlite, a group of water polo boys (read: exhibitionists) come out on stage in their tiny team trunks and do a choreographed dance to the song “Happiness.” This is not a typical Edmonton gay night out, and I wonder, has the city done enough to win over the crowd to return without an IGLA event at play? I get my answer downstairs, in the pre-Grindr gay man’s boardroom: the urinals. The guy next to me is a swimmer from Seattle. He raves about the drag show (Chad Michael’s of RuPaul’s Drag Race did a phenomenal Cher and Harley Quinn).

“So what did you think of Edmonton?” I ask. “If not for this tournament I never would’ve known what a great city it is,” he says. “I’m going to have to come back.”

Steven Bereznai is a Toronto-based travel writer, author, and two-time IGLA water polo gold medalist. His books include I Want Superpowers, Gay and Single…Forever?, and Queeroes. He can be reached through his website www.stevenbereznai.com.