Top Posts
5 Reasons to Escape to Long Island this...
ESCAPE PLAN: Austin, Texas
Wilson Cruz and Other Celebrities Speak Out for...
Decorate Like A Designer With Jonathan Adler
Future Perfect Project Giving Free Concert at Lincoln...
Pack Your Bags and Prepare to Celebrate Pride...
Visit Lauderdale Launches New Campaign to Show the...
Tom Prior: The Star of the Gay Biopic...
8 Awesome Things to Do in Canada’s Banff...
Earth Day: 5 Countries Going Green and How...
Home Destination Europe Culinary Road Trip in Switzerland 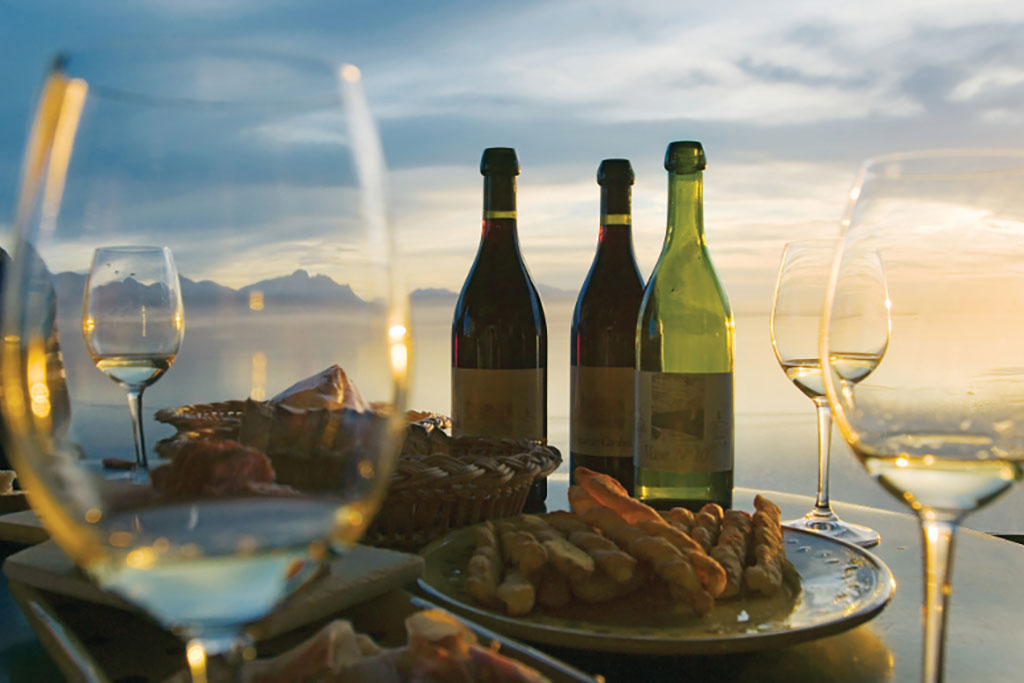 A short ride from Fribourg’s city center, the town of Gruyères is home to the raw cow’s milk cheese that has been in existence since 1115. It takes more than 100 gallons of local milk to produce a single 77-lb. wheel.

At only 216 miles wide and 137 miles from north to south, Switzerland is a relatively small footprint to cover, but, because of its neighbors, it offers a portal to a diverse range of culinary influences. My first stop: Fribourg (www.fribourgregion.ch).

One of Switzerland’s 26 cantons, Fribourg lies in the western region and the city of the same name features The Université de Fribourg (www.unifr.ch), one of the few bilingual universities in all of Europe. The city has a youthful pulse due, in no small part, to Cardinal beer, the local brew created in 1788 that flows at nearly every pub. While the city proper showcases farmers’ markets and the Gothic-style Cathedral of Saint Nicholas (rue des Chanoines 3. www.stnicolas.ch), I’ve got my eye on a particular café, but not before heading out of town to conquer my first Swiss delicacy: Gruyère cheese.

A short ride from Fribourg’s city center, the town of Gruyères is home to the raw cow’s milk cheese that has been in existence since 1115. It takes more than 100 gallons of local milk to produce a single 77-lb. wheel. Like the great wines of the world, true Gruyère cheese receives AOC (appelation d’orgigine contrôlée) designation that guarantees the cheese’s authenticity.

A tour of La Maison Du Gruyère (Place de la Gare 3. Tel: +41-26-921-84-00. www.lamaisondugruyere.ch), the local demonstration cheese-dairy, offers a somewhat touristy snapshot of the cheese-making process. The factory produces 48 wheels per day, and you’re bound to see décailage (the process of cutting the curds into grains). If you’re a cheese diehard, contact La Gruyère Tourism (www.la-gruyere.ch), and you can arrange a tour of a smaller producer in the hills, where the process is performed over a wood-burning copper kettle. Be sure to allow time to walk through the medieval town of Gruyères itself, home to the splendid castle Château de Gruyères (rue du Château 8. Tel: +41-26-921-2102. www.chateau-gruyeres.ch), quaint local shops, and a captivatingly bizarre HR Giger Museum (Château St. Germain. Tel: +41-26-921-2200. www.hrgigermuseum.com) created by Academy Award–winning HR Giger (Alien), that features his collection of biomechanical art and sculpture.

After lunch at La Fleur de Lys Gruyères (rue du Bourg 14. Tel: +41-26-921-8282), where I enjoyed a massive bowl of alpine soup (a Swiss version of everything-but-the-kitchen-sink concoction that overflows with potatoes, macaroni, greens, heavy cream, and, of course, garnished with cheese and croutons), I make my way to Maison Cailler (rue Jules Bellet 7. Tel: +41-26-921-5960. www.cailler.ch), the famous Swiss chocolate dating back to 1819. The factory is overrun with children, but it’s worth weathering the Willy Wonka madness and multimedia installation to get to the end prize: an all-you-can-eat feast of Cailler. This is not a place for restraint, and the one stop on my expedition where Swiss civility falls by the wayside in lieu of cocoa nirvana.

In spite of cheese-and-chocolate overload, my travel companions and I muster the strength to dine at one of Fribourg’s most popular restaurants, Café du Midi (rue de Romont 25. Tel: +41-26-322-3133. www.lemidi.ch). I am slammed with the ripe smell of cheese, old wood, and flowing wine as we weave our way through the packed room to our table. While Maison Cailler was a children’s playground, the café is a hearty, vibrant backdrop for grown-up fun. Fondue is the specialty of the house, and we order several massive enameled pots of the bubbling cheese and accouterments. Fondue forks pierce through the air. Bread is torn and impaled. Platters of air-dried beef are passed above our heads, and the living traditions of Switzerland have never tasted so good.

The next day I head north toward the French border to discover the hills, valleys, and gorges of Jura and the Three Lakes (www.biel-seeland.ch). Jura peaks at an elevation of 3,200 feet and, on a clear day, the sunlight basks towns like La Chaux-dé-Fond that’s world famous for its history of watchmaking. I decide what better way to acquaint myself with the region than an afternoon of wine tasting?

Vinothek Viniterra (Im Moos 4. Tel: 41-32-315-7747. www.vinothek-viniterra.ch), just a short walk from Lake Biel, offers tastes and insights about this small wine-growing region. I chat with grower Regina Hadoran who pours and talks…and pours some more. The region is known for Switzerland’s most planted white variety: Chasselas. Used to make “church wine,” this unaged white wine is typically harvested in October and ready to drink by February. Think of it as the Swiss version of Beaujolais nouveau.

Hadoran says, “It’s the most important thing for wine growers to have relationships with their customers.” 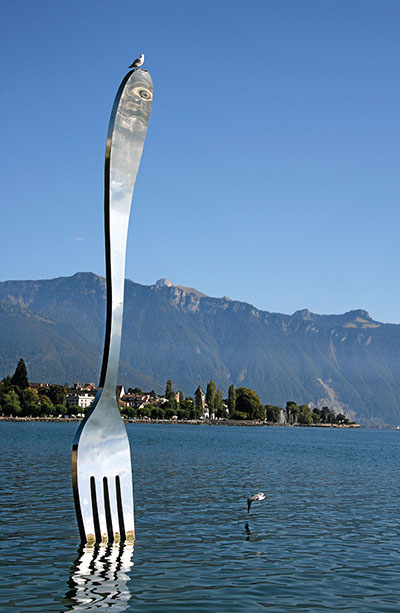 Considering that the majority of the wine stays within the canton, those relationships can last a lifetime, but Hadoran warns that due to global warming, the Chasselas’ fate may be in danger as the variety relies on cooler weather for ideal growing conditions. While I can’t cellar my own stash for future consumption as it’s meant to be consumed young, I do pick up a few bottles to share with my oenophile friends stateside.

While the Swiss wine tasting leaves me with a greater appreciation for the local producers, there is another spirit known in the region, one with a sordid past that beckons me: absinthe. In the district of Val-de-Travers lies Absintherie du Père François (rue de l’Arnel 1. Tel: +32-861-2318. www.absintherie.ch), which is both a museum of collectibles as well as an operating distillery. Considered by some to be an elixir for good health and others to be a hallucinogenic drug, the anise-flavored spirit was banned in Switzerland from 1910 until 2005. The vintage apothecary bottles, equipment, and illustrations offer insight into absinthe’s role in Swiss culture, but it is only by consumption that I understand its effects. The myth becomes reality after several glasses, and I’m tempted to pursue the Route de L’Absinthe, a mapped collection of 26 distilleries, museums, confectionary houses, and drying barns that trace the impact of this most intoxicating elixir.

It would be unfair for the region to let neighboring Gruyères have all the glory when Tête de Moine (AOC) is like its delicate sister, waiting for its turn in the spotlight. Used as a form of payment by the Bellelay monks in the 12th century, the silky semi-hard cheese is aged for three months on pine boards then shaved into rosettes using a special device called a girolle. Of course, a knife works, too. (It is rumored that the hungry monks would sneak into the cellar late at night, shave off a piece from the top, then rewrap the wheel as if it had been untouched.) I could spend the afternoon shaving cheese, but there is one more expedition to conquer and that requires traveling east.

Crossing back past Zürich and toward Switzerland’s northeast corner, the canton of Appenzell is home to culinary traditions that draw inspiration from nearby Germany and Austria. Its namesake town is an idyllic Swiss village, and if I squint hard enough I envision Heidi (originally penned by Swiss author Johanna Spyri and later embodied on film by Shirley Temple) skipping through the narrow streets, a basket of baked goods dangling from her arm.

The bread throughout Switzerland has been remarkably delicious, but it is Appenzell’s pastries that take the cake. Tarts and turnovers spill over the counters at the local bakeries. Beer and sausage are also commonplace, and I indulge in both for lunch at a local café. Two hefty links of siedwurst (a beef sausage seasoned with caraway and garlic), are accompanied by potato salad and all washed down with the local brew, Appenzeller Bier. Swiss-cultivated hops and barley combined with Alpstein massif spring water produce lagers and stouts with pronounced characteristics ranging from sweet and malty to aromatic and nutty.

For my final foray into Swiss food culture, I hop on an e-bike for a gastronomic tour through the region. The morning begins with pastries and coffee at Landgasthaus Neues Bild (Dorfstrasse 1. Tel: +41-717-871303. www.neuesbild.ch), a guesthouse and restaurant tucked away amid the rolling hills. Onward to Hotel Bären (3823 Wengen. Tel: +41-33-855-1419. www.baeren-wengen.ch) for hearty braised meat, freshly baked bread, and delicious wine. Perched atop a vista with the local church steeple in the distance, unleashed dogs wander across the road as if to say, “Where are the scraps for me?” We finally arrive at the Appenzeller Cheese Show Dairy (Appenzeller Schaukäserei, Dorf 711. Tel: +41-71-368-5070 www. schaukaeserei.ch), and I find that my Swiss culinary road trip has come full circle. I am ending where I began…with cheese.

My culinary journey reveals that Switzerland’s cuisine is more than cheese, beer, chocolate (and intoxicating shots of absinthe in the back woods). It is the sum of various cultures and traditions that blend together in a delightful way that tingle all of the senses.

Celebrate Your PRIDE in the Sullivan Catskills