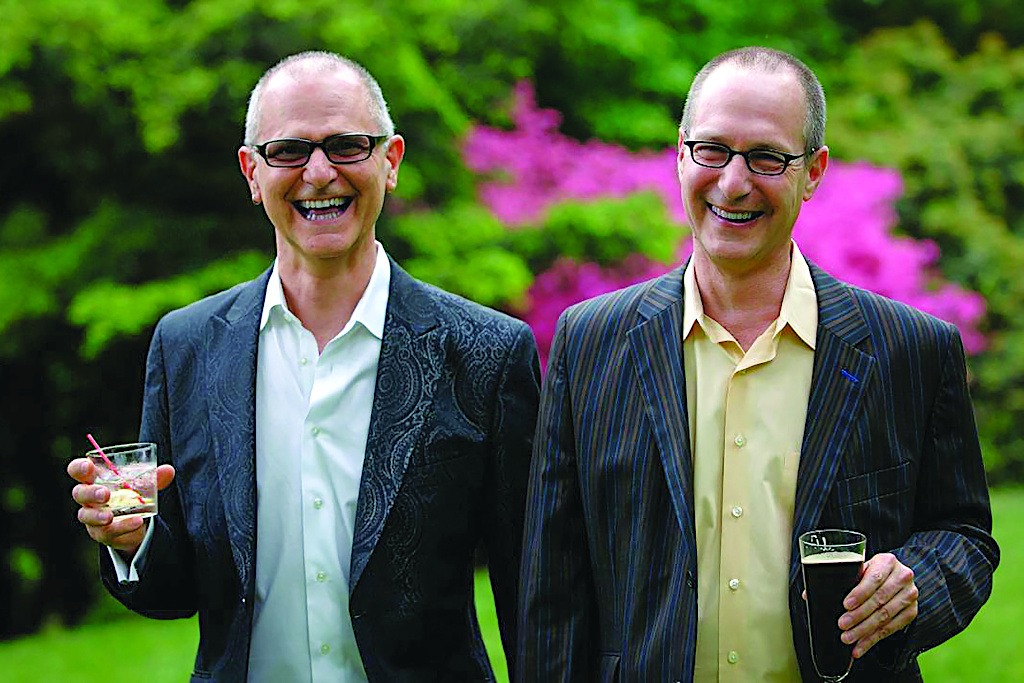 Upon meeting composer Dan Martin and lyricist Michael Biello, their mutual soft-spoken demeanors belie the powerhouse of creativity that allows them to use their talents to promote acceptance, open-mindedness, and love. Together forty-three years, Michael and Dan have been longtime collaborators as well as life partners.

Individually, Michael is a ceramic sculptor and theatre artist as well as a lyricist. Working out of their studio located in Old City, Philadelphia, his one-of-a-kind chandeliers, wall sculptures, and figurative sculptures are sought after by private collectors and have been exhibited in museums internationally. His ceramics are often described as Felliniesque however, I prefer to call them Bielloesque; his work is gloriously fantastical. As Michael says, “I believe that art is a healing force in the world. My work is spirit driven. I honor this spirit by giving it voice, by bringing together diverse elements to create a sense of peace, love, harmony, and balance.”

Dan is a composer and music producer who has worked on numerous projects including scores for theatre, dance, and film. He’s written club-charting dance tracks, music for meditation and healing, and independent songwriter CDs. One such artist is Grant King and together they created his hauntingly beautiful album, Bodies of Water.

Together, Biello and Martin have produced an enormous and eclectic wheelhouse of music and theatre.

How did the two of you meet?

Dan Martin: We met in Yellow Springs Ohio in the summer of 1975. Michael was dancing with Group Motion, a modern
dance company known for combining improvised movement, theatre, live music, film projections, and sculpture. They had just returned from performances in Berlin to teach a summer workshop at Antioch College, which I was attending. I had recently taken a leave of absence from the music school where I’d been studying classical flute performance and composition. I was longing for a more out-of-the-box creative path, and also for a steady boyfriend. That summer I found both!

You’ve been together as a couple for over forty-three years; did you begin collaborating as a composer/lyricist team right away? If not, how did that evolve? 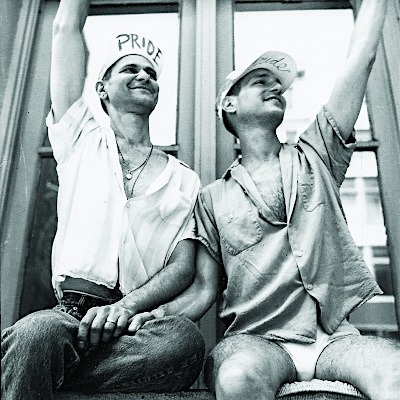 Michael Biello: I was and am a visual and theatre artist. Dan’s main focus was music. His making music for dance was our initial way of communicating. After we met, we were inspired to work together on something personal to us …telling stories that reflected our lives as two men in love. As our connection deepened I shared my journals with Dan and he began to set my poems to music. This opened a new kind of intimacy for me…the marriage of words and music. The composer/lyricist developed over time…it found us.

How do you keep your work fresh? What inspires you?

MB: People inspire me. Free thinkers. Dogs. Mother Ocean. Love inspires me. Inspiration is constant. I try to stay open to the call of the ever-changing tides, but that’s sometimes difficult…life gets in my way…fear gets in my way…I get in my way. Inspiration is there when I open myself to receiving it. Not just in my head/mind but in my whole being…body and soul.

DM: The interplay between creative mediums inspires me: music, dancing with lyrics, movement, text, visual art. Writing for characters and specific theatrical situations inspires me to find music that expresses their longings, struggles, joys. Every time I sit at the piano with a fresh page of Michael’s lyrics in front of me, music flows through my head, heart, and hands.

Are the two of you still involved with OUTmusic which, you co-founded?

DM: We started OUTmusic in our East Village loft in 1990 when we invited a handful of openly LGBT singer songwriters to share music, food, and conversation about what it meant to be OUT in the mostly closeted/homophobic music world at that time. We met monthly, attracting more musicians, and soon we moved to The Center on 13th Street where we produced open mics, coffeehouses, festivals, compilation CDs, and the annual OUTmusic Awards.

MB: Through the years OUTmusic grew into a powerful national organization. It became so large that Dan and I needed time and space to focus on our own musical theatre life, so in 2007 we carefully passed it on to a new director. Once that happened we stepped away giving OUTmusic freedom to follow a new path.

Dan, you studied with composer/lyricist Maury Yeston (Nine, Titanic, Grand Hotel.) What was that experience like?

DM: When Michael and I auditioned for the BMI Musical Theatre Workshop (in 1992) we were asked to perform original material and we agonized over what to present, something “safe” or something explicitly gay, which felt like a big risk at that time. We eventually decided (of course) to go totally gay and put it all out there from the start rather than pretend to
be something we weren’t. We were enthusiastically welcomed into the workshop, and 2 years later we were invited into the Advanced Workshop where Maury Yeston became our coach. He was amazingly generous and supportive, often encouraging Michael and I to go further, deeper, more passionately into our words and music. It’s ironic that for years before that, Michael and I had hoped for mentorship from gay composers we admired, reaching out to Sondheim, Jerry Herman, Stephen Schwartz…but to no avail. We finally found it with Maury who’s not gay, but totally tuned in to our deeply romantic, quirky take on life and love. As far as I know, we were the first team in the history of the BMI Workshop to present
openly queer material and Maury was right there cheering us on! 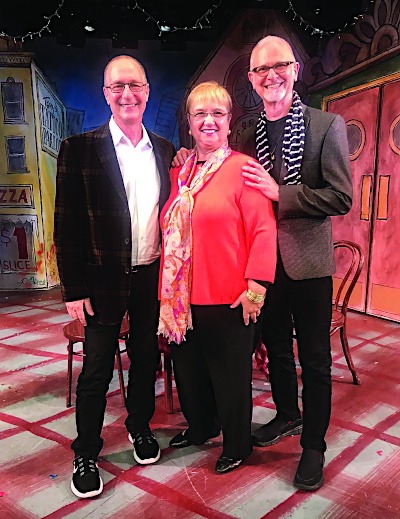 In your musical Marry Harry, there’s a delicious song titled “Lidia,” about celebrity chef and restaurateur Lidia Bastianich. When composing the songs for the show, did you know you wanted one about the Queen of Cuisine? And why did you choose her?

MB: It’s an Italian thing. A mama thing. A nonna thing. Her commitment to food and family speaks to me. She’s like my family. When we first wrote the song for Lidia our creative team was like “Lidia who?” After a fair amount of googling they were ready to trust she was a good choice…for me she was the one and only choice. I love Lidia. Dan and I love Lidia. We watch her on TV and enjoy using her cookbooks. She also seemed right for Marry Harry because our lead character Little Harry was raised by his father. He needed a mother figure in his dreamscape. Lidia was perfect! When we actually got to meet Lidia, she was everything I imagined and then some. Totally open to us and our show. We knew she was the right choice to sing ab out …a celebration of food and family …we could use more of that in the world. ( Note: Marry Harry was most recently produce d Off-Broadway at the York Theatre Company.)

I love your song, “ A Circle of Diamonds,” about activist Edie Windsor. Was this for a particular show or concert? And how did this project come about?

DM: We met Edie through Barbara Proud who photographed and interviewed us, as well as Edie and dozens of other long-term same-sex couples for her award winning 2014 book First Comes Love. In the book , Edie tells the story of how her life-partner, Thea, proposed to her in the 1960s (long before marriage was legal) with a diamond pin, rather than a ring, which would have attracted to o much attention. Inspired, we wrote “A Circle of Diamonds” and presented it to Edie who loved it and agreed to appear in a video. We filmed it in Edie’s apartment in Greenwich Village in December 2015 and released it online the following year. Since then it’s been screened at dozens of film festivals around the world. 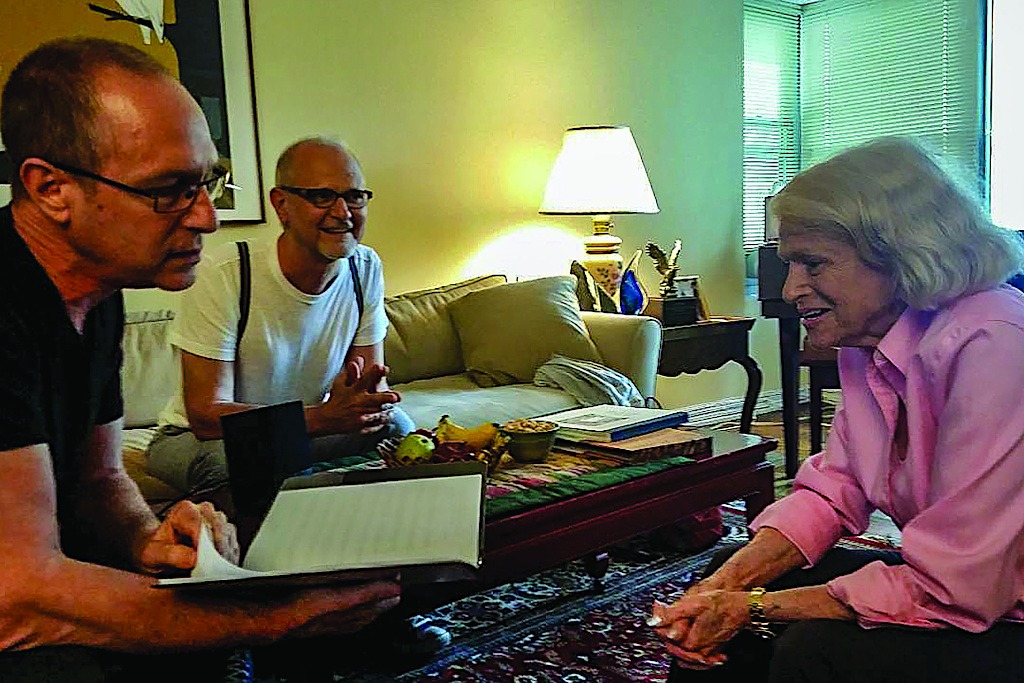 Michael, is it tricky, dividing your time between being lyricist and a sculptor?
MB: My visual art is me and my art…sometime s working with one client and/or an interior designer. My theatre art is me and a creative team in collaboration …writer, director, musicians, designers, actors. They are different head and heart spaces for me. There are times when I move smoothly from one to the other, but lately, since both my art and theatre careers are demanding more time. I find transitioning between them is more challenging. This dual life also tends to happen in different cities. At the moment my visual art/life centers i n Philadelphia, while my musical theatre/life centers in New York. It’s just how it is these days. I’m not complaining, just trying to find an easy way to shift from art to theatre… from Philly to New York.

Tell us about Michael and Dan’s Amazing Queer Songbook…clarify for me, exactly what a Songbook is. I know it’s a selection of your work over the years, but then is it present presented as a theatrical show? Or is it made into a film? Is it a type of performance art that would appear, say, in a gallery? It sounds like you are incorporating so many creative elements into it. Please explain more.

MB: It’s all of the above and then some. Seems Songbook is taking on a life of its own. We have an idea of what it could be, but each step of the way it directs us toward what it wants to become. It seems to be bigger than us and ever changing…as are the times. The main thing I hold strong to is sharing the history of we two men in love, living, loving, and building a creative life together. Song is our guide. Words and music. They tell our story. It’s a live story, so that’s where the ever-changing landscape comes into play.

DM: The idea for our Amazing Queer Songbook began in 2015 when I did a solo concert of our songs interspersed with patter about the history of our relationship and collaboration. We followed that with a musical revue in 2016 called The Biello Martin Songbook where I again narrated and played the piano, but was joined by four additional singers. Meanwhile we were being encouraged by our writing group to dive deeper into telling our personal history. As we continued working we expanded the concept to include audio and video recordings of our songs as well as photos from our archives, and to use an online platform to share all the materials— a living project/compendium celebrating our life, work, and love together. www.AmazingQueerSongbook.com is where the project lives for now. But we’re also open to a future live theatrical version.

Once Songbook is going strong, what’s up next on your creative slate?

DM: We’re writing songs for a new musical in collaboration with our Marry Harry creative team: book writer Jennifer Manocherian and director Bill Castellino. It’s a Faustian tale about a woman from a small town in Western Pennsylvania who’s fascinated with celebrity culture and fantasizes about becoming a part of that world. Her dream comes true with the help of a doll she knits that comes to life, but there’s a price to be paid each time she moves up the ladder.

MB: In addition to our new musical collaborations… I’m working on a few exciting art commissions…including a series of art and light installations for a new condominium in Old City Philadelphia and a chandelier for a client’s summer home in France’s Loire Valley.