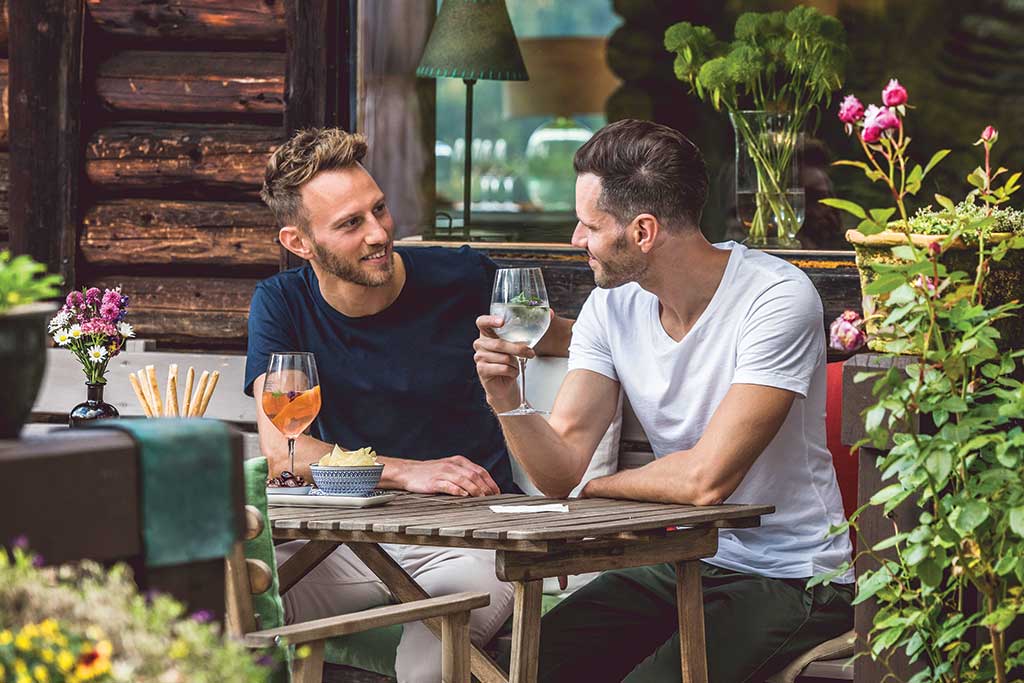 I recently visited the land of Wiener schnitzel and pumpkinseed oil in search of Austria’s best bites, and to taste how the country is keeping pace with 21stcentury gastronomy trends, while still maintaining its authentic traditions.

I ask an American what is considered quintessential Austrian cuisine, and you’re likely to get a furrowed brow. At roughly 32,000 square miles (think South Carolina, but landlocked), the country shares borders and cultural influences with the Czech Republic, Germany, Hungary, Italy, Liechtenstein, and Slovakia. In its heyday, the Austrian Empire was one of the most powerful in Europe, ruled by the Habsburgs for nearly six centuries. The declared war against Serbia marked the beginning of World War I, and by 1918 the dynasty was history. Nazi invasion followed and an eventual restoration of autonomy with the help of the Allied Forces.

Sitting at the epicenter of Europe’s evershifting alliances has tested Austria’s resiliency, but it has also laid the groundwork for culinary inspiration drawn from historical trade routes and centuries-old farming and agriculture industries. I recently visited the land of Wiener schnitzel and pumpkinseed oil in search of Austria’s best bites, and to taste how the country is keeping pace with 21stcentury gastronomy trends, while still maintaining its authentic traditions. 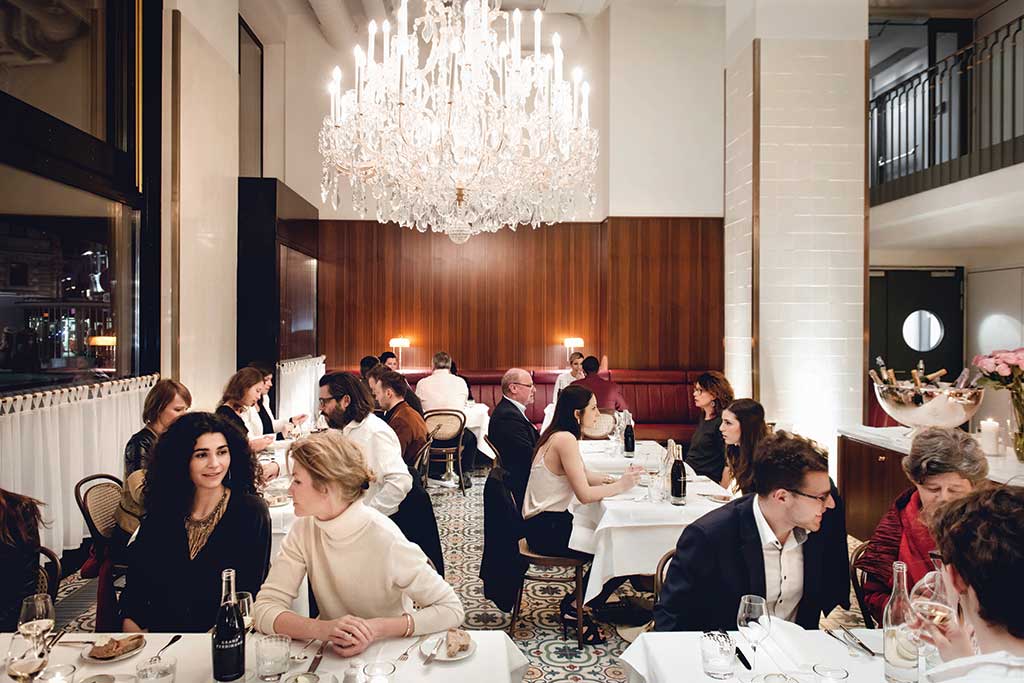 DINING AMONG ROYALTY IN VIENNA

Vienna is Europe’s unsung hero for stunning Gothic, baroque, and modern architecture. It also boasts the Ringstrasse, a three-mile circular road where you can find the Vienna State Opera, the Museum of Fine Arts, and other Insta-worthy landmarks. Commissioned by Emperor Franz Joseph in 1857, it is the symbol of the city’s penchant for the finer things in life and still serves as an anchor for Vienna’s bustling and sophisticated lifestyle.

But it’s the sound of veal cutlets pounded into plate-size portions in the salon kitchen that gives Meissl & Schaden its signature Viennese flair. Dipped in free-range eggs then coated in breadcrumbs, the Wiener schnitzel sizzles away (in your choice of clarified butter, lard, or neutral vegetable oil) until crispy. Finished with a hearty squeeze of lemon, it embodies the essence of classic Austrian cuisine.

I could ensconce myself in the Grand Ferdinand for the duration of my stay and be completely content, but I choose instead to hit the pavement the following day with the assistance of my gastronomic guide Bianca Gusenbauer of First Vienna Food Tour (www.sinnes tour.com). Her passion for food and the connection between what we eat and its impact on local and global economies brings Vienna’s landmarks to life as we stroll, eat, and chat along the city streets. 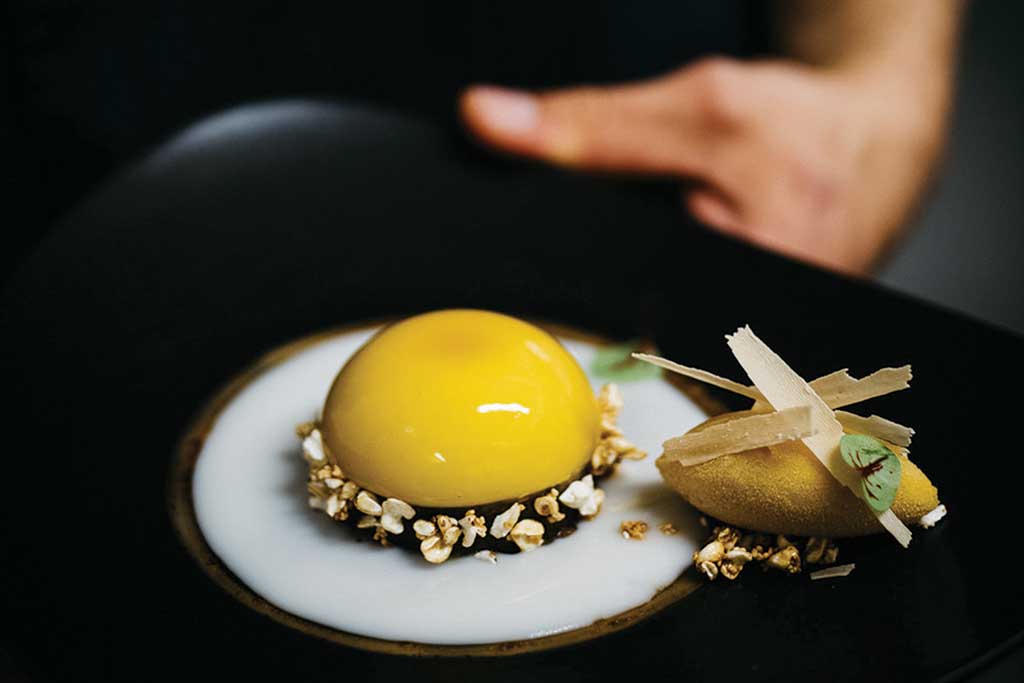 The morning begins (as all mornings should) with a glass of Schlumberger sparkling wine that Bianca has hidden away in her day bag. Austria’s oldest sparkling wine cellar, Schlumberger’s 300-year history can be experienced on-site at its city center wine cellar (Heiligenstädter Straße 39. Tel: +43-1-368-22-59-631. www.schlumberger.at), but the clock is ticking so we toast with a traditional “Prost!” and hit the pavement, buzzy from the bubbles.

We wander into Vienna’s famous Naschmarkt (Wienzeile between Karlsplatz and Kettenbrückengasse), packed with more than 120 stands featuring fresh produce, specialty items, and restaurants. Bianca’s finetuned palate leads the way, highlighting different ethnic dishes that have emerged over the years, such as Turkish cuisine and European influences from the former Yugoslavia. We stop for a tasting at Umar Fisch (Tel: +43-1587-0456. www.umarfisch.at), a Croatianstyle restaurant that serves freshly caught delicacies like whole grilled carp, prawns, and keta (salmon roe) caviar.

Temporarily satiated, we venture on and are fortunate to discover a vendor pouring Sturm, a quickly fermented wine that appears in late September after the grape harvest. The loosely capped wine with a kombucha-like flavor profile only lasts for a few days and gives the Viennese an excuse to imbibe in the annual ritual with unabandoned fervor.

Chocoholics will rightfully be impressed by one of Austria’s most famous chocolatiers, Joseph Zotter, which can be found at one of the Naschmarkt’s many stalls. The family business dates back to 1987, but it wasn’t until several years later that Zotter Chocolate (www.zotterusa.com) was born with innovative flavors like poppy-cinnamon and pumpkin brittle with marzipan. Art designer Andreas H. Gratze reimagined the brand in 1994 with creative collectible wrappers, and today, Zotter is the only Austrian producer to fully commit to fair-trade and organic production. I purchase a handful of bars to bring back stateside, but they’re so addictive that only one remains by the time I arrive at the airport for departure. 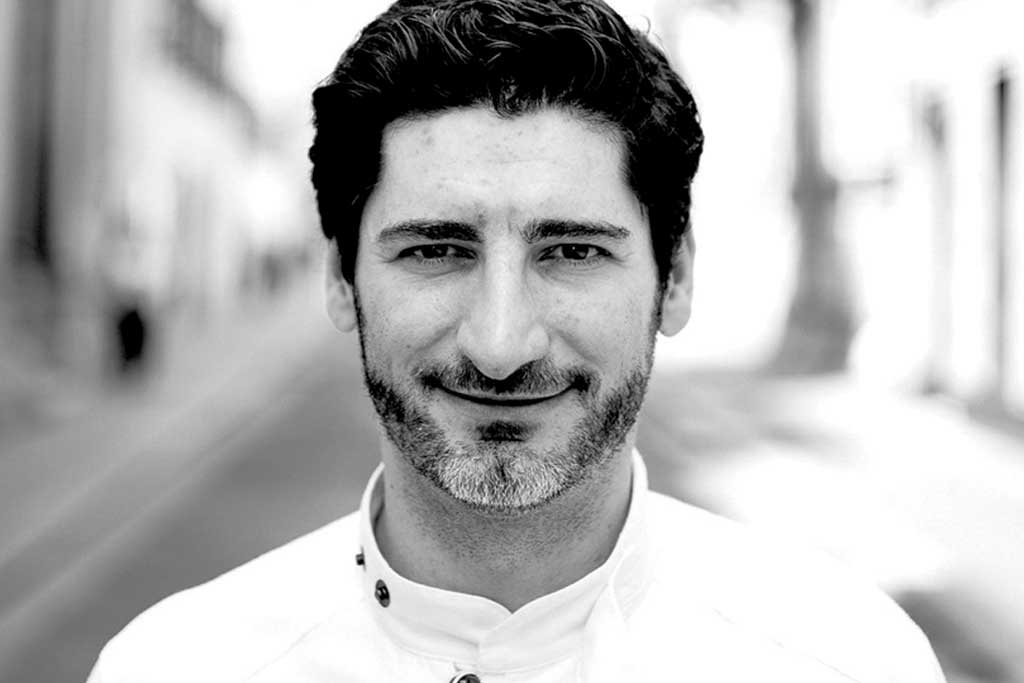 Strolling among Vienna’s winding streets, we explore a range of Vienna’s coffee houses—a must-visit whether or not you’re caffeinatedly inclined. Café Sperl (Gumpendorferstrasse 11. Tel: +43-1-586-4158. www.cafesperl.at) is a benchmark for tradition. Dating back to 1880, it has long been a gathering place for artists, political leaders, and tastemakers. Third Wave coffee houses have emerged over the past several years, concentrating on substance over style and seeking out different beans from around the world, as well as experimenting with roasting style. Fürth Kaffee (Kirchengasse 44. www.fuerthkaffee.eu) sources beans from Bali, India, and Thailand (among other more familiar locales) and roasts in-house, identifying the harvest, roast, and barista as the three critical components to the perfect cup. Supersense (Praterstrasse 70. Tel: +43-0-1-9690-832. www.the.supersense.com) merges modern coffee culture with throwback technology at its sensory analog café. Discover vintage Polaroid cameras, a private recording studio, DIY albums, and more.

Our final Viennese indulgence that day is an exquisite six-course lunch at chef Paul Ivić’s Tian (Himmelpfortgasse 23. Tel: +43-0-1-890-4665. www.tian-restaurant.com), one of only a handful of vegetarian restaurants in Europe to earn a highly coveted Michelin star. The transcendent meal begins with house-made crackers and sour milk butter with subsequent courses featuring creamy cauliflower with a one-hour egg and pesto; onion soup with sourdough mousse and braised leeks; and an aromatic “Ispahan Delight” showcasing rose jelly, dates, and pistachios. A post-meal chat with Ivić reveals his grandparents farmed and produced olive oil and wine. This deep connection to his food source inspires Tian’s nearly all-organic menu and hyper-seasonality. The Michelin star, ironically bestowed on the chef’s rare day off, has changed the guests’ perception, shifting from “Austrian skepticism” to mouth-watering anticipation. 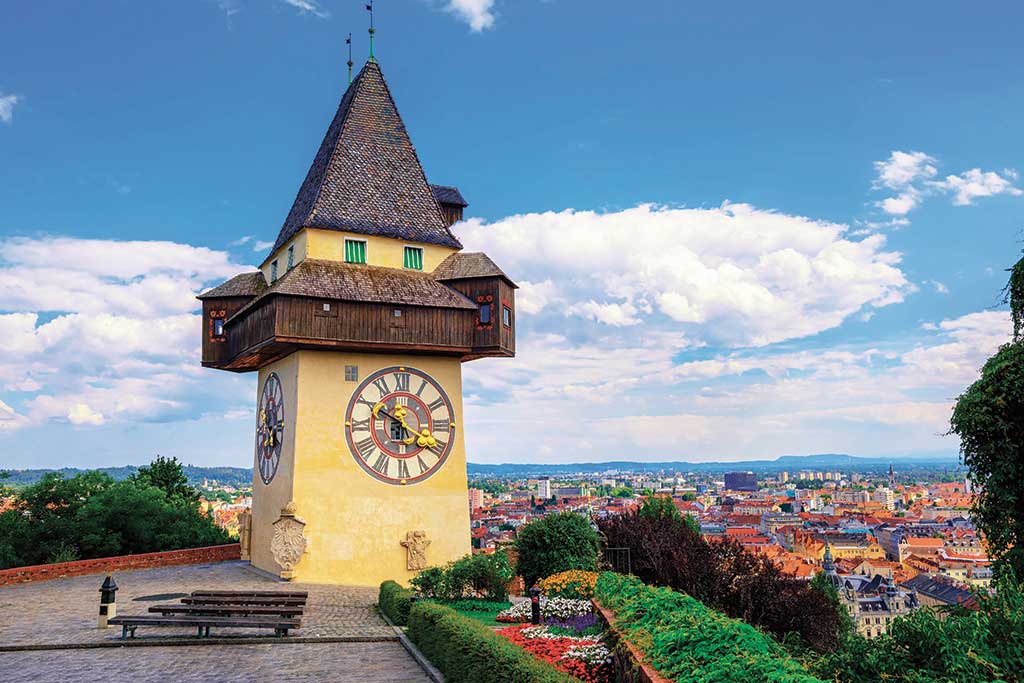 By no means does Vienna have the stronghold on Austria’s culinary prowess. Head southwest and, in just over two hours, you’ll find yourself in Graz (www.graztourismus.at), a university town brimming with hungry Millennials, unique retailers around every cobblestoned street, and surprising examples of contemporary architecture.
I drop off my bags at Hotel Wiesler (Grieskai 4-8. Tel: +43-0-316-70-660. www.hotelwiesler.com), a historic property conceived by Hanz Wiesler, who in 1870 converted several guest houses into luxury accommodations that overlook the Mur River. Original touches still appear throughout, but it is Clemens Hollerer’s soaring contemporary architectural installation, “Jigsaw Falling Into Place,” in the hotel’s lobby that reflects Graz’s sensibility as a forward-thinking cultural hub.

Engaging the expertise of local guide Irmgard Pferzinger, I hit the streets to discover what Graz has to offer, beginning with a stroll through the Kaiser-Josef Farmer’s Market (Kaiser Josef Platz) where rows of stalls reveal fresh produce, baked goods, and “green gold”—Austria’s famous pumpkinseed oil. Styria (the state of which Graz is capital) grows 90 percent of the country’s pumpkins, and it’s here that you can buy bottles straight from the farmer. I pick up a few from local vendors, swept away by the pumpkin-centric culture. 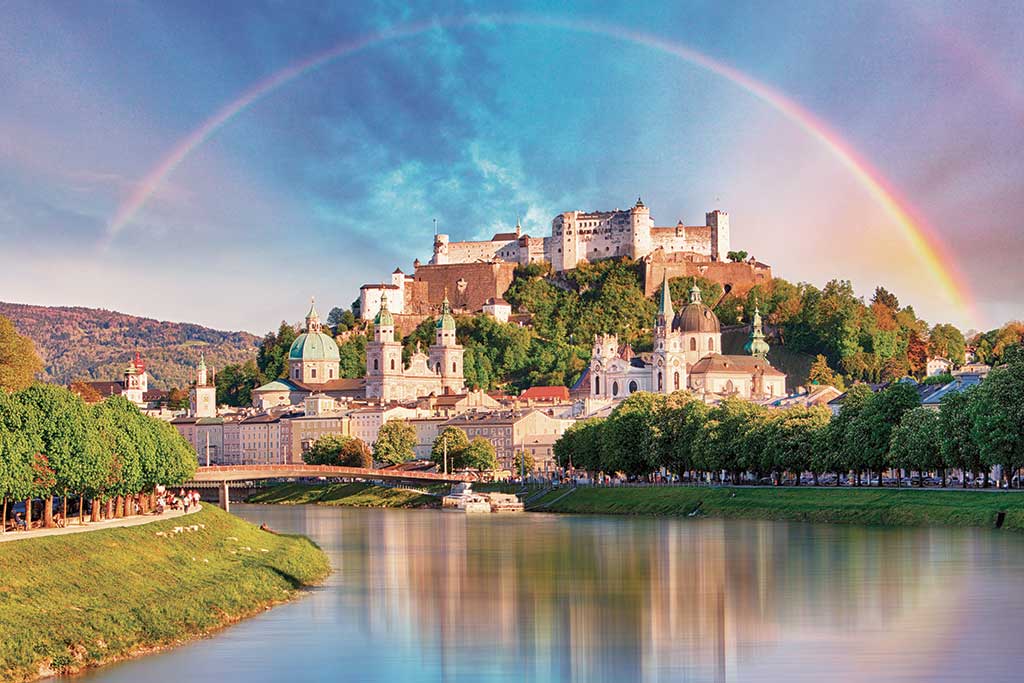 The region’s must-eat dish is fried chicken. Perhaps a distant cousin to the crispy Wiener schnitzel, “Steirisches Backhendl” is typically served with a hefty squeeze of lemon and a salad dressed with pumpkinseed oil. Landhauskeller (Schmiedgasse 9. www.landhaus-keller.at) has been serving locals and visitors alike for more than 400 years.

After lunch, we rest our not-so-weary feet for an afternoon spritz at Frankowitsch (Stempfergasse 2-4. Tel: +43-316-822212. www.frank owitsch.at). Here, we find a vast sampling of open-faced sandwiches that are sure to satiate anyone’s appetite. Soon, I’m weighted down by purchases of locally made jams and other condiments, but after a refreshing Campari cocktail at the venue’s namesake pop-up, I’m reinvigorated to venture on.

A feast for the eyes can be discovered at Graz’s cultural institutions, including Neue Galerie Graz (Joanneumquarter. Tel: +43-316-8017-9100. www.museum-joanneum.at/en/neue-galerie-graz) where “Who are you? Two centuries of portraits” is on display through October 2019. Themes of sexuality and gender appear throughout the exhibit, including works by Egon Schiele, Urs Lüthi, and Andy Warhol.

As the sun sets we take the funicular to the castle atop Schlossberg hill that offers farreaching views of the city. A farewell meal at Schlossberg Restaurant (Tel: +43-316-8400-00. www.schlossberggraz.at/restaurant) offers an inventive first course of tomato chips with Styrian ham, followed by confit of Arctic char with tomato broth and puffed rice, and a final “Prost!”—toasting with a glass of Ruster Ausbruch, an amber-tinted dessert wine from Austria’s Burgenland wine region. 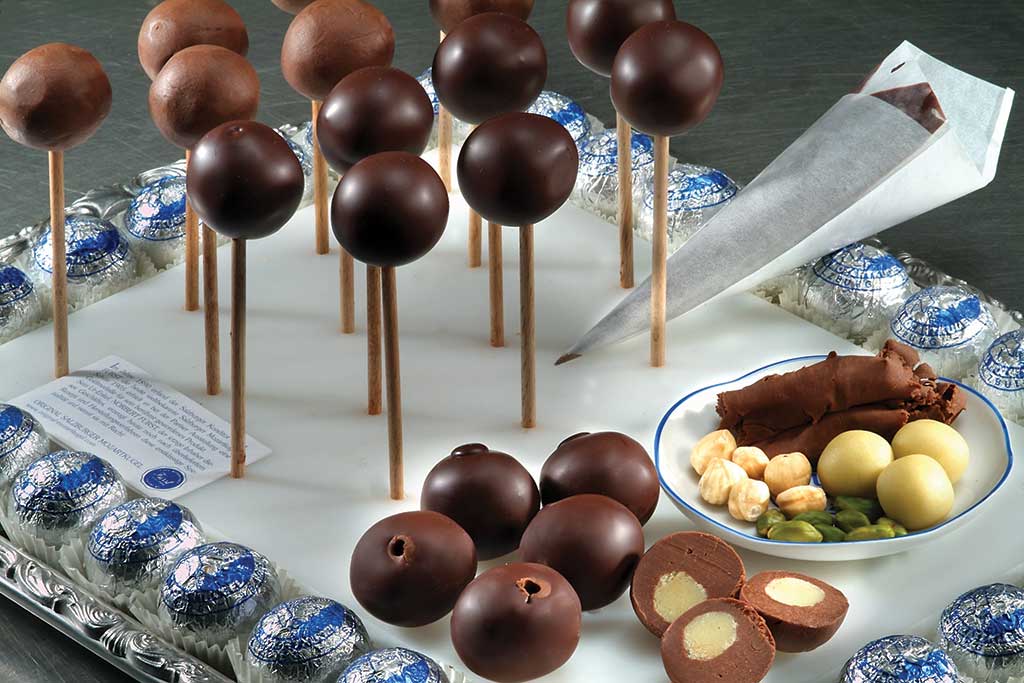 MUSIC AND MOZARTKUGEL IN SALZBURG

Heading northwest, I venture on to my last destination, Salzburg (www.salzburg.info), home of Mozart, the film location of The Sound of Music, and Mozartkugel.
The Mirabell Gardens and Pegasus Fountain are a familiar sight to fans of the Academy Award–winning film The Sound of Music, where flocks of tourists abound, singing “Do-Re-Mi.” I grab a table at Café Tomaselli (Alter Markt 9. Tel: +43-6628444-880. www.tomaselli.at), one of the city’s most historic coffee houses dating back more than 300 years, where servers navigate the packed room with platters piled high with classic Austrian pastries such as the linzer torte, Black Forest gateau, and Dobostorte (a seven-layer Hungarian cake).

For the ultimate carb overload, Stiftsbäckerei St. Peter (Kapitelplatz 8. Tel: +43-662-847898) dates back to the 12th century and produces an incomparable sourdough bread from a wood-burning oven.

Those with a sweet tooth must seek out the “Original Salzburger Mozartkugel.” The praline has its imitators scattered throughout the city, but the real deal can only be found at one of Fürst’s (www.originalmozartkugel.com) four Salzburg locations. Founded by Paul Fürst in 1884, the confection is made of marzipan with pistachios, nougat, and dark chocolate, and is a sweet reminder of my time spent in Salzburg.