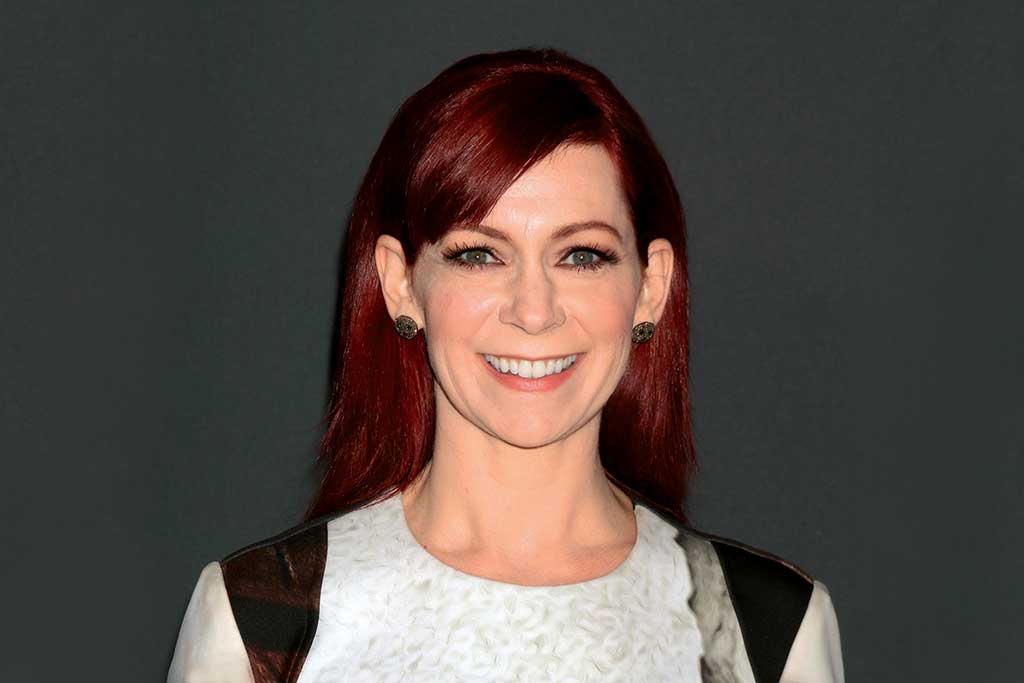 With her production company Daisy 3 Pictures Carrie has produced and/or directed queer films Ready? Ok, 29th & Gay, and That’s What She Said.

Carrie Preston is a scene stealer. From her breakout roll playing Julia Robert’s sister in My Best Friend’s Wedding to the fiery waitress Arlene Fowler amid vampires and witches in True Blood to her Emmy winning roll as Elsbeth Tascioni in The Good Wife, chances are she’s played one of your favorite outrageous characters

Throughout her career, Carrie has been very supportive of LGBT projects with roles in productions like Transamerica, True Blood, and most recently When We Rise. With her production company Daisy 3 Pictures she has also produced and/or directed queer films Ready? Ok, 29th & Gay, and That’s What She Said.

In her latest role on TNT’s Claws, Carrie plays Polly another off-the-wall character that lures you in with her sweet Georgia-peach accent and then will cut you if you cross her or her friends. The show is about a group of strong and eclectic women working at a nail salon while laundering money for a drug kingpin who is bisexual and owns a transgender strip club. Her performance as Polly allows her to steal scenes opposite an amazing cast including Niecy Nash and Judy Reyes (who plays lesbian Quiet Ann).

Carrie joined me in the VIP Lounge to talk about places she like to visit, Claws, Rupaul, and the late Nelsan Ellis who played iconic gay character Lafayette, her scene-stealing partner on True Blood.

Do you feel pressure to have your nails done all the time since you’ve been on Claws?

I do! I feel a lot of pressure! This morning I had to interview for a morning show and I thought okay “I can’t just show up with my regular nails I’ve gotta do something because everyone always wants to ask about those claws. What are your claws looking like?” I can’t touch what we get on the show. Those artists are creating these works of genius for us to wear on our hands, but I went to my local nail place in West Hollywood and I said, “Okay you gotta give me something jazzy.” So I worked with her, came up with a design. I never would have done that, I usually just wear a basic color or a gel but now that doesn’t feel like nearly enough. It’s like I’m a little addicted to fun nails now that I’ve been on Claws.

In one of the episodes the ladies do a dance number to “Lady Marmalade,” do you all burst into song or dance on the set regularly?

There’s never really a moment when somebody isn’t singing something or doing some kind of dance or something to keep our energy up. As far as the actual shooting of that scene we had a choreographer come in and because our shooting schedule is so tight we didn’t have that much time with her. She gave us the choreography and we all would go in the backroom in between takes and rehearse together. She taught it to us the day before and the day of shooting we were under some pressure to get it right.

Polly and Elsbeth on the Good Wife/Good Fight are characters that at first glance are sweet and unassuming but eventually show their “claws” and reveal they are the smartest people in the room. How do you go about playing these amazing women?

Well I start with what’s on the page. You know there’s a saying “if it ain’t on the page it ain’t on the stage.” So you do have to have good writing. With Polly it’s who am I trying to be? Who is she trying to be in this moment? So there’s the real Polly that is somewhere deep inside and only the actor really knows her because she’s not going to let the real Polly out. She does not want her real self to be seen; she’s an identity thief. So I start with that, I start building the image that Polly wants the world to see and that changes from situation to situation and that’s why it’s really fun to play her.

Which has been the most fun identity to play?

Probably when her friend Sally comes to the salon and Polly has to turn on a dime and become Heather again having not done that in a while. She is able pull out a character at a moments notice from her bag of tricks. It was fun recreating that character.

You shoot Claws in New Orleans. Are there any hidden gem restaurants or locations you’ve discovered?

I really love being in New Orleans. It’s so rich with culture and the food is extraordinary; a little too extraordinary if you’re an actress and you want to eat everything and you know you have costumes you have to fit in. I had to be judicious in my culinary explorations. I was really taken with the Cajun food,but also just the experience of being in a Cajun environment. It’s very welcoming, warm, and New Orleans is a little bit crazy. I had a couple of favorite restaurants: there’s this unbelievable restaurant that has an incredible brunch in the Irish Channel which is a little bit south of the garden district and it’s called Atchafalaya and that was one of my favorite go-to places. My favorite joint in the quarter is a placed called Sylvain that’s a little off the beaten track. It’s on Chartres Street, but it’s a smaller kind of tucked away place that I love.

You’ve taken on a lot of projects about LGBT people and work on these shows with queer characters, how has the LGBT community impacted your life?

I feel like I’m a part of the LGBT community as an ally. It’s a huge part of my life and so many of my friends are in that culture. I love everything that the community represents. I’m proud to be part of it, and to be somebody who’s telling those stories because I think there are stories that need to be told and there’s an audience that’s underserved. As a filmmaker I think it’s important to create content for them. It’s getting a lot better, but there’s room for vast amount of improvement. Working with someone like Dustin Lance Black, who is a master of that, is a real honor. My production company has a specific mission to try to create films for the LGBT community. We’re also in a much better situation right now in content about women and for women. Claws is definitely answering that call, but as a filmmaker I will continue to serve those audiences.

Speaking of Dustin Lance Black, earlier this year you played gay activist Sally Gearheart in When We Rise, what was is it like portraying that character?

It was an incredible experience to play somebody who is still alive. I didn’t get to meet Sally, but there is a great amount of research that I did and there are lots of videos on her online. Reading about her accomplishments was really exciting and I was impressed with what she was able to achieve in her life, and to be able to transform into someone is always exciting for me. I felt this responsibility to pay a great amount of homage to Sally, to elevate her in a way that respected her accomplishments. I took that very seriously and I hope that the people who knew her and know her are pleased with how I represented her.

Last August, you were excited by a series of Twitter notifications and one of them was Rupaul following you back. Are you ever going to do Drag Race?

Yes! We’re working it out I’m very hopeful that I’m going to be a celebrity judge on the next season!

I was shocked to learn in July about the passing of Nelsan Ellis, can you share a fond memory about your time with him?

Nelsan was a force of nature. He had such a gift as an actor but also as a person. He was humble, kind, and a sweet soul; yet he would take these characters, in particular Lafayette, and just transform in front of everyone’s eyes and it was magical. I’ll never forget in the pilot that iconic scene where he, Glenn Collins, Ana Paquin, and myself were all in Merlot’s and we’re bantering back and forth. Nelsan and I just started riffing and improvising and he just started throwing these things out at me and I thought, “Alright I’m right there with you (we both went to Juilliard), let’s play.” He started talking about coco and I’m talking about whip cream, pointing to my bust line and he’s pointing to everything on himself [Laughs]. They kept it and it ended up being this wonderful scene that captured the camaraderie between those characters. And I’ll never forget that day of shooting and realizing that I’m playing with somebody who’s pretty magical.

You’re currently living in New York. Are there any local hangouts you would recommend? What’s the most underrated thing about NYC?

Everybody always goes to the big parks and there’s this little smaller park right by the Flatiron District, it’s called Madison Square Park. It’s such a calm little place in the middle of the insanity of Manhattan. There’s a little dog run and sculptures in the middle. In the summer they have music during the lunch hour and I always love to go over and take a little break from my day with my dog and enjoy the park.

You grew up in Georgia. Is there any place that you would recommend people visit that is quintessentially Georgian?

One of my favorite places in the world is Jekyll Island. It’s one of the barrier islands of Georgia. It’s so beautiful and quiet. They have an ordinance that prohibits a lot of development so there’s a lot of the original wild life that they maintain. It used to be a resort island for the Rockefellers and the Carnegies and it’s their little cabins that are stunning and gorgeous. You can go tour them. It’s a sweet little island that’s not like any of the other beach destinations on the east coast.