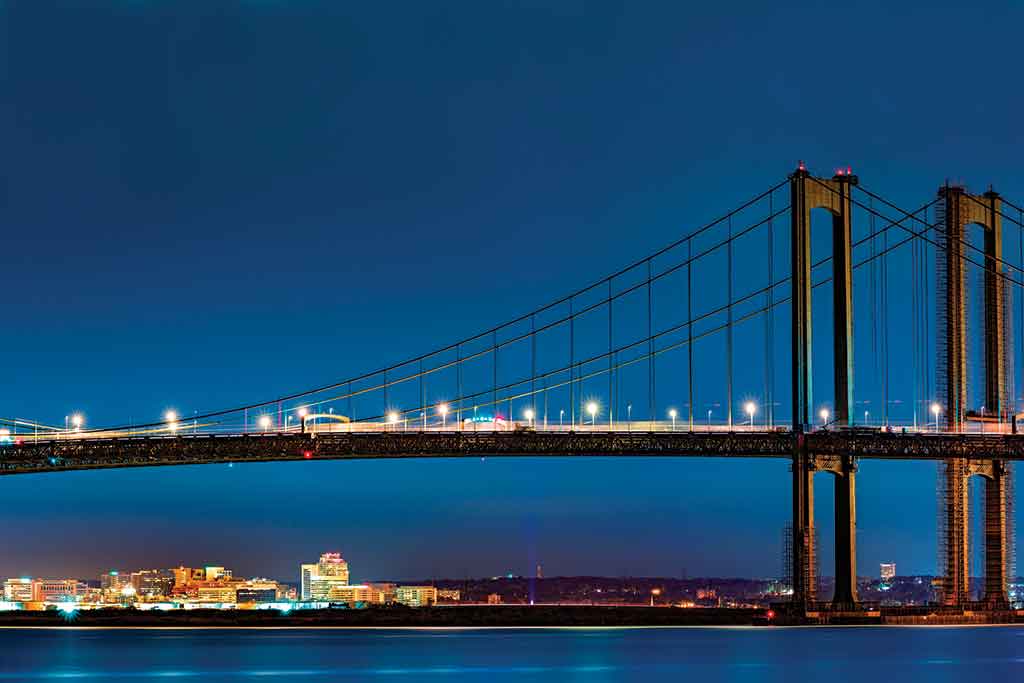 Delaware was one of the earliest (the sixth) American states to permit same-sex marriage.

Bravo to the du Ponts for creating what’s voluptuous and enduring in the small city of Wilmington, Delaware: a garden larger than Central Park, museums and estates filled with world-class collections, ballet, theater, and opera, all this accessible within a few hours of Baltimore, Boston, New York, and Washington by car, bus, or rail.

But where did all that du Pont money come from? Fleeing the French Revolution, Pierre Samuel du Pont de Nemours brought his family to America in 1800, and it was his son, Éleuthère Irénée, trained in chemistry, who went to work producing gun powder. The black-powder explosive was used not only in Civil War battles but also to blast efficiently through rock. This allowed for building and road construction (explosions killed 228 workers and E.I.’s son Alexis in the process) and was the genesis of the DuPont empire—still going strong today.

An exhibit at the Hagley Museum (200 Hagley Creek Rd., Tel: 302-658-2400. www.hagley.org) illustrates the enormous progress the DuPont companies have made since gun powder. From Nylon stockings and racing cars to food ingredients to space suits, the progress and ubiquity makes your head spin.

Now step into the museum on the site of the first factory and family homestead, and you can virtually live the du Pont life you might have lived (as long as you were in the closet.) And by the way, there were no real closets; where would you have put your collection of frock coats and velvet slippers? Into the big wooden wardrobes, that’s where. And the help would have hung everything up for you.

On the property, you’ll see the factory workshop, where boys were apprenticed at the age of 14 at about ten dollars a week and happy for the job. This dim mill gives an idea of how employees ground iron gears by kerosene light in any weather, including blistering southern heat.

The then current du Pont boss on the other hand, might have been cooling off in the 235 acre park-like grounds along the banks of the adjacent Brandywine River. Note the 350-yearold Osage orange tree still throwing shade right here. Beginning with E.I., his seven children, and thousands of books, five generations of the family lived in this house, adding more rooms to make space for the French furniture they’d bought or inherited, and adding exotic shells, rugs from India, ostrich eggs, American folk art, and European pieces to place among the cozy wing chairs and four-poster beds. In the downstairs terrace room, a table is set for a ladies’ lunch, looking as if they’ll be arriving any minute. Surprisingly, in a house of luxuriously appointed interiors, the mansion’s flowerbedecked and candle-lit formal dinner table could seat only eight diners.

Continuing for another dose of du Pont splendor, the Winterthur Museum, Garden and Library (5105 Kennet Pike, Tel: 800-448-3883. www.winterthur.org) is more than just a local attraction. It’s a destination that lures horticulturists from every corner of the world to its gardens, and interior design professionals to view its rooms, famous for their collections of American decorative arts. As a trolley ride takes you through the gardens that surround the house, depending on the month and season you may drive through “the Boss” Henry Francis’s eight acres of azaleas or be dazzled by a ground cover of yellow daffodils or a sea of bluebells. The floral flashiness outdoors is a fitting introduction to what’s waiting for you inside. The du Ponts were busy collectors, especially great grandson Henry and his wife. She and her husband had just two daughters, which didn’t stop them from adding 175 rooms to the original 12, and filling them with items bought from estate sales: furniture, chandeliers, silver, ceramics, framed photos, items you might want to take home or to the thrift shop; the mix gives an extra dimension to the people who lived in comfort and luxury here. There are some imaginative touches, like lamps made from ballasts and paintings that coordinated in color with the furniture in the room in which they hung. Did Henry have a gay-designer gene? We’ll never know, but he seemed to know what he was doing. 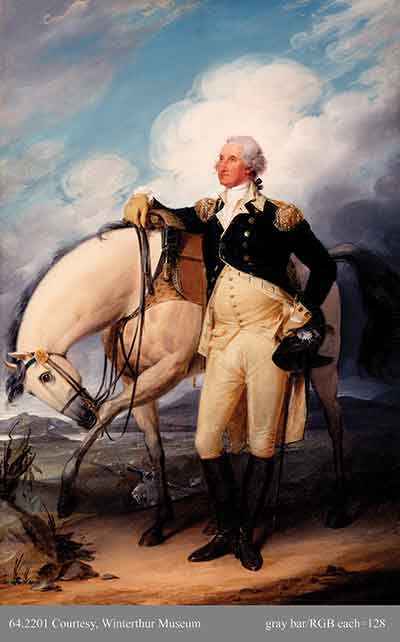 The fifth floor especially, with its arched doorways in subtly graduated sizes, shows esthetic ingenuity. All the wallpaper here and throughout is original or a recreation of the original and the paint colors are also authentic. George Washington’s porcelain is here too.

On the fourth floor don’t dare miss “the most beautiful room in America,” according to Jacqueline Kennedy. The Port Royal Parlor features matching yellow damask settees, the yellow color incorporated into the carpet, draperies, and wing chairs. The pièce de rèsistance, the highboy between the windows, is considered an unusually fine specimen of early American furniture. Look for take-home images of these exhibits in the larger of two very wellstocked Wintherthur Gift shops.

An annexed exhibit features the Campbell Soup tureen collection. After seeing these in metal, china, and ceramic you may feel the need to eat something. Lunch could be in the Winterthur Cafeteria on-site, a casual, airy spot.

When it’s time for dinner, a warm and chic place, featuring soft lights and oil paintings of cats is the Krazy Kat Restaurant (528 Montchanin Rd., Tel: 302-8884200). It was formerly a blacksmith’s shop, now it’s part of a small spa hotel. If you haven’t had a taste of antelope lately, look for it on the menu.

On the other hand, if fish is your thing, head to Harry’s Seafood Grill (101 S. Market St., Tel: 302-777-1500. www.harryshospitalitygroup.com/harrys-seafood-grill). It has a menu as long as a chapter in a novel, including ten different kinds of oysters, lobster, octopus, sashimi, and ceviche. If it comes out of water, salt or fresh, it’s here. There’s outdoor seating, views of the Christina River, and the host, Eric, is hunky and young.

Are you a gardening freak or just planning to throw seeds into a few windowsill pots? The Nemours Mansion and Gardens (850Alapecas Dr., Tel: 302-651-6913. www.nemoursmansion.org) is great grandson Alfred I du Pont’s creation. The gardens feature Carrera marble statues, a maze garden, a gildedvase pedestal designed by sculptor Henri Crenier, and water jets that shoot 12 feet into the air from a reflecting pool. Palatial is also the word for the adjacent mansion. It was built for wife number two, Alicia, who was partial to French furnishings, and unlike the small dining table at Winterthur, she installed one 25 majestic feet long in her place.

Over this dining table was a Phantom-ofthe-Opera chandelier, actually imported from the Schönbrun Palace in Vienna. Alfred gave the place the name, Nemours, for the French region from which the du Pont family originally came. A popular attraction also on the property is the chauffeur’s garage, with its collection of the du Ponts’ antique cars.

In size alone, Longwood Gardens (1001 Longwood Rd., Tel: 610-388-1000. www.longwoodgardens.org), a few miles away in bordering Kennett, Pennsylvania, takes top showoff prize. It’s larger than Central Park and now attracts well over a million annual visitors. Mr. Pierre Samuel du Pont, another great grandson, loved boxwoods, and they’re featured here, but so is every imaginable shrub, plant, and rosebud. Flower chandeliers? Reflecting pools and lilac trees? Fountains and a colonnade? Hanging orchids? Cherry blossoms? All here. Although this is basically intended as a park for walking, there are some scooters for rent and paths for wheelchairs. There is also a botanical wonderland “under glass” in the conservatory where you can enjoy the fresh green aromas, splashing fountains, stone benches, and familiar and alien shrubs, vines, and cacti. Open every day except Thanksgiving and Christmas, there is also the promise that these gardens are worth a visit in any weather. Outside, try the “figure eight walk,” and feel free to walk on the grass to find the botanical designer’s touch at every turn.

Aside from native-son Joe Biden, the city is also proud of its famous illustrators. Howard Pyle’s work, including nine murals, is permanently exhibited at the Delaware Art Museum (2301 Kentmere Pkwy., Tel: 302-571-9590. www.delart.org). He is also the fabled teacher of N.C. Wyeth, whose most well-known works are the illustrations he did for Treasure Island, on display nearby at the Brandywine River Museum of Art (1 Hoffmans MIll Rd., Tel: 610-388-2700. www.brandywine.org/museum). Both his studio, and his son Andrew’s, welcome visitors and offer guided tours. 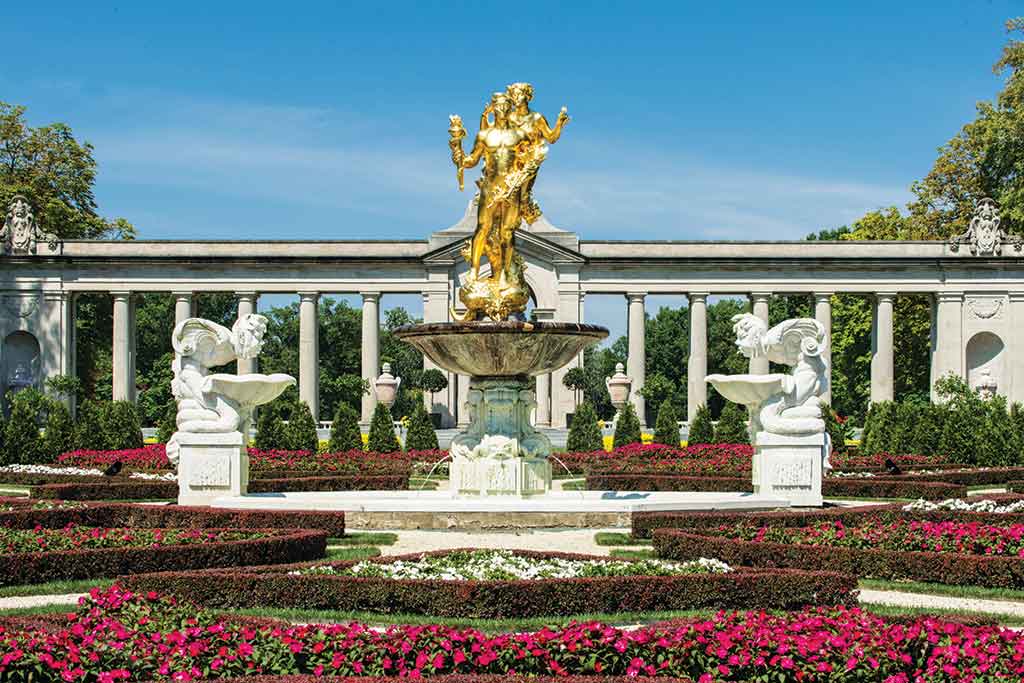 Andrew Wyeth’s place is rather disordered, surprising since his work is particularly fastidious and precise. The easel, paint-smeared palette, and streaming light from the studio’s windows might put you in the mood to grab a brush and paint a selfie yourself.

Coming back into this century, Hardcastle Gallery (5714 KennettOike, Suite 3H, Tel: 302655-5230. www.hardcastlegallery.com) in Centreville framed the Wyeths’ works. Once a slaughterhouse, it still sells frames but also exhibits contemporary art, much of it local. Prices range from $200 to $25,000.

John Gardner, executive director of AIDS Delaware (www.aidsdelaware.org), is a suburban resident of the city. Gardner and his husband have lived here together for 25 years and were married at the iconic Hotel du Pont (42 W. 11th St., Tel: 302-594-3100. www.hoteldupont.com). He says “Wilmington has a small-town friendly feel. We recently hung a Human Rights flag outside our house and a neighbor came over to thank us.” Gay bars, he said, were once here but hidden, “a 90s thing,” with very few left.

One of the few gay gathering spots left in the city is Crimson Moon (1909 W. 6th St., Tel: 302-654-9099. www.crimsonmoonde.com), which features drag shows, strippers, theme nights, and a DJ Patrick Carroll, executive director of the Delaware Humane Association, mentioned it. He says, “Delaware was one of the earliest (the sixth) American states to permit same-sex marriage,” and nowadays he is busy running the no-kill shelter and walking his border collie and black lab. He and his husband are more likely to go to the monthly “Our Night Out” party. It’s a Thursday night event for gays and gay supporters with 1,500 members; check Facebook or the next event.

Generally speaking, the du Ponts were a fertile family. With cousins of cousins, remarriages, various branches and geographic dispersions, it’s virtually impossible to get the genealogy straight. There are now between three to four thousand du Ponts living on our planet. It’s possible you’ve met one, or will sooner or later. If you do, you might thank them for creating this cultural utopia and giving travelers the chance to experience the impressive sights of Greater Wilmington and the Brandywine Valley.