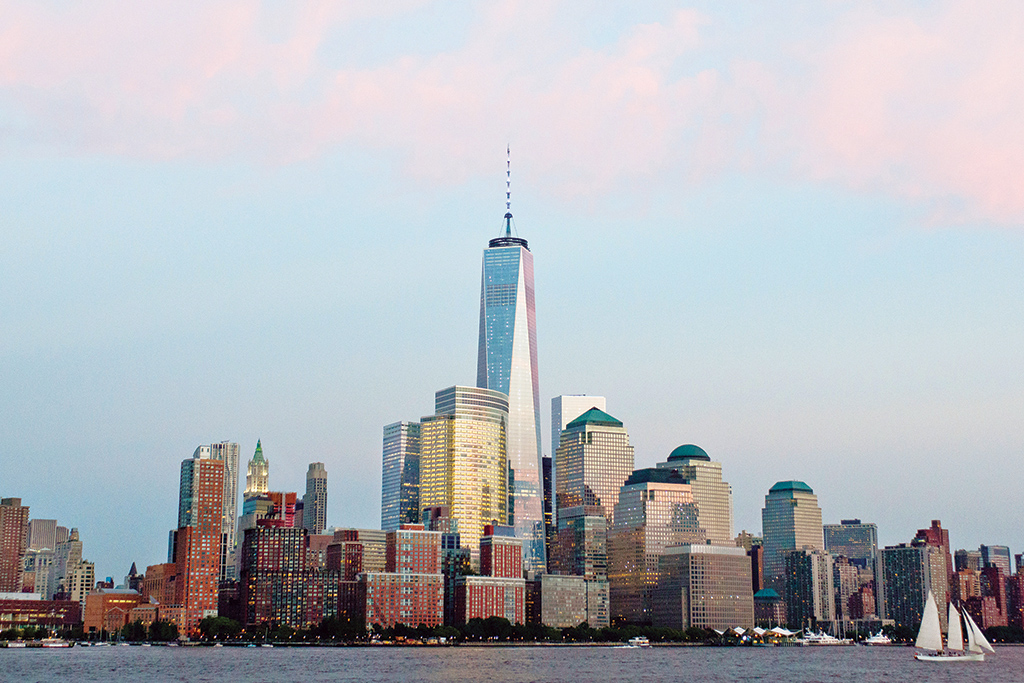 New York City may have long lines and overpriced attractions, but enjoying a quintessential experience is attainable.

I’m seesawing on a sloop in New York Harbor, its white sail waving like freshly hung linen. Down: the sparkling water laps up on the boat and my mimosa, the color of the early-morning sun, feverishly sloshes. Up: One World Trade Center pokes its silver top above the large sail and an endless blue sky makes Downtown Manhattan look like a professionally painted cityscape sold in a Times Square souvenir shop. A salt-filled ocean breeze whips between the Statue of Liberty and Ellis Island and swirls with the fresh orange juice smell from the Champagne flutes of a dozen brunch guests aboard Manhattan by Sails’ Shearwater (www.manhattanbysail.com). The boat’s sail turns slightly against the wind, and grants me a full view of the City. From this vantage point New York seems different, and that’s what I’ve been searching for during a whirlwind oneweek trip as a New York tourist.

Trying to ditch my existing biases and opinions as a ten-year New Yorker and a life-long New York State resident, I forge a plan to take off work and discover just what New York is like for an average tourist trying to take a bite out of the Big Apple. 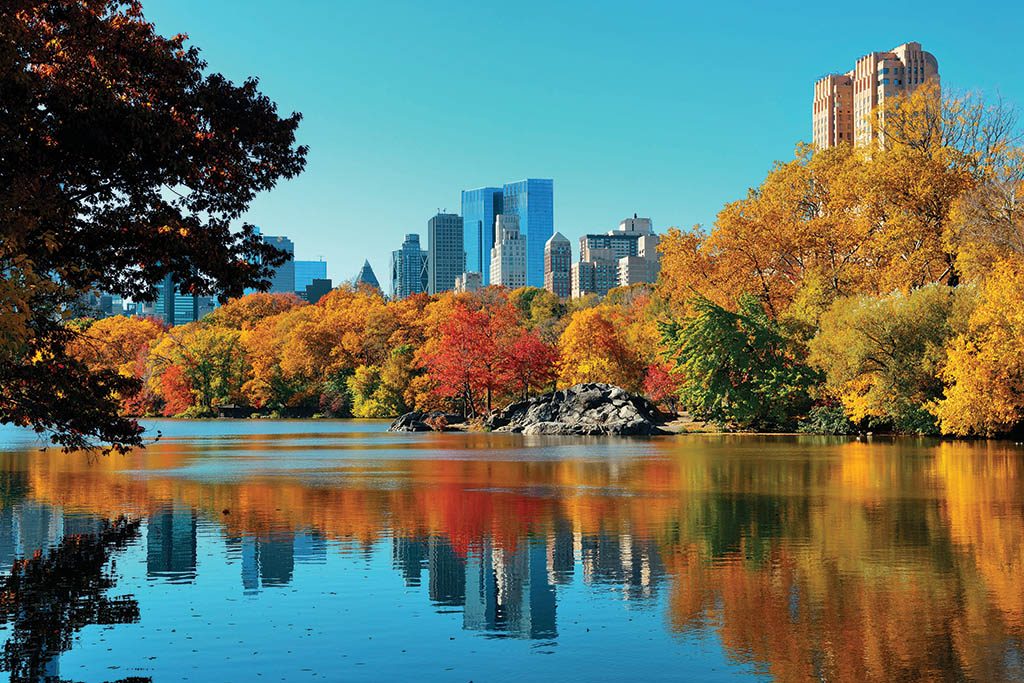 And while I enjoy seeing attractions that I’ve never actually visited, like the Empire State Building, I try to find new and exciting ways to see this thriving metropolis of eight million people. I also quickly discover that navigating and experiencing New York City is fraught with long lines, overpriced attractions, and endless schemes to take advantage of tourists, but enjoying a quintessential experience is attainable.

During the week, my friend Tom from Ireland arrives, and we check into a New York City landmark hotel, The Roosevelt (45 E 45th St. Tel: 212-661-9600. www.theroosevelthotel.com). This hotel, which was built in 1924, practically screams old money and its location on Madison Avenue gave it the nickname “The Grand Dame of Madison Ave.” The hotel has been completely renovated, and its superb location near Grand Central Station, sprawling rooftop restaurant/bar, and general ornateness make it a tourist- friendly home base.

Knowing that we’d be going full-on tourist, I purchase both CityPass (www.citypass.com) and the Official New York Pass (www.newyorkpass.com). The CityPass is limited to a handful of New York attractions that include New York main- stays like American Museum of Natural History, the Empire State Building, the Circle Line, etc., and with a price point of $114 and no time-usage limit, this is a nice option for those who want to hit some of the City’s most well-known attractions.

The Official New York Pass has over 80 attractions, but costs us around $289 for the seven-day pass. We found ourselves using the New York Pass for everything (and even going out of our way to take advantage of it). When you see the lines at most attractions, you’ll be happy you shelled out the money for the Official New York Pass as you get express entry to most of them. An estimated two-hour line at the Empire State Building is almost entirely avoided, letting us whizz past Disney World–style queues that zigzag through kitschy King Kong statues. Although I admit my impression of the views from the top of the Empire State Building (350 5th Ave. Tel: 212-736-3100. www.esbnyc.com) have always been romanticized á la Sleepless in Seattle, the feeling of being on top of this international symbol is exhilarating with its breathtaking panorama. 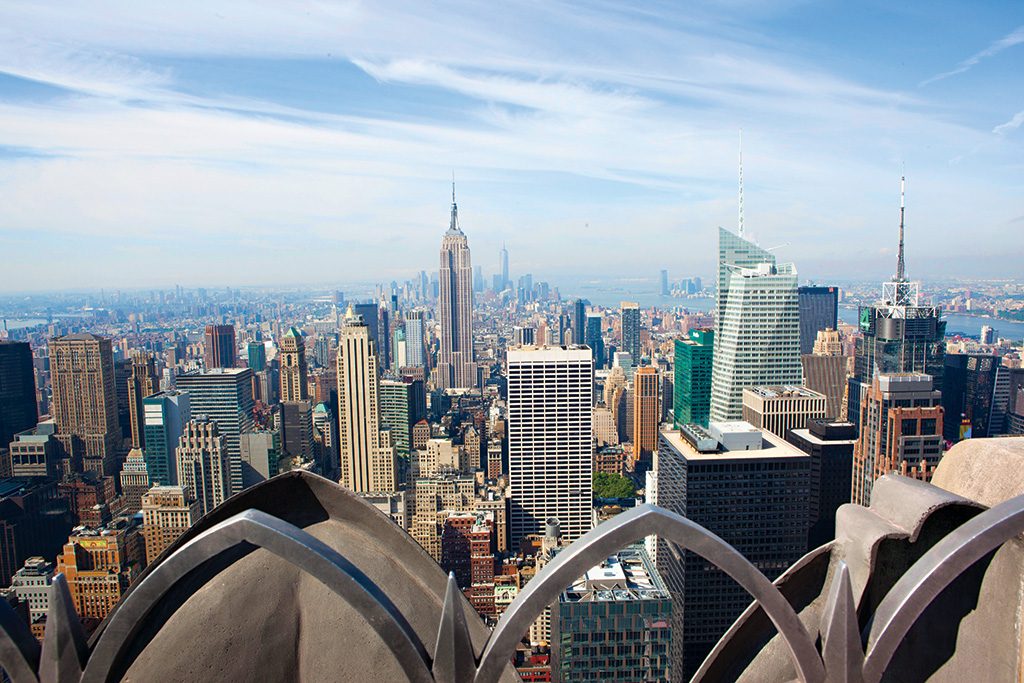 Top of the Rock
view of Empire State Building

Still dizzy from the previous day’s insane, tourist-filled itinerary, Tom threatens to spend the day in bed at the Roosevelt if I don’t find something that involves food and booze. I choose one of several companies that cater to the ever-growing segment of culinary tourists. We arrive in New York’s Union Square to a bus full of travelers, and we are greeted by a thick Brooklyn-accent. “Who’s in the mood for pizza today?” our tour guide asks. This is the Slice of Brooklyn (www.asliceofbrooklyn.com) tour so you better be in the mood for pizza,” she dryly jokes. Our bus, complete with TV screens that show clips of movies throughout the ride, whisks us across the Manhattan Bridge to an area called DUMBO (Down Under the Manhattan Bridge Overpass). “You know,” she says. “Crossing the bridge into Brooklyn is like having a good cigarette, you can finally breathe,” she quips. Her sense of humor is in fact a breath of fresh air for us, as she makes jokes along with waxing poetic about her home borough. The tour, despite only making two pizza stops, is a great intro to Brooklyn as we visit neighborhoods along the way (and even get to stop at the Goodfellas house). The bus drops guests off in Coney Island, and we stay and choose (OK, I force Tom) to follow our pizza with a Nathan’s hot dog. Bellies now officially full with pizza, hot dog, and beer (Tom got his wish), we ride the Atlantic Ocean’s most famous ride, The Cyclone—maybe not the best idea on a full stomach!

8 Tips To Help You Stay Swimsuit Ready While On Vacation