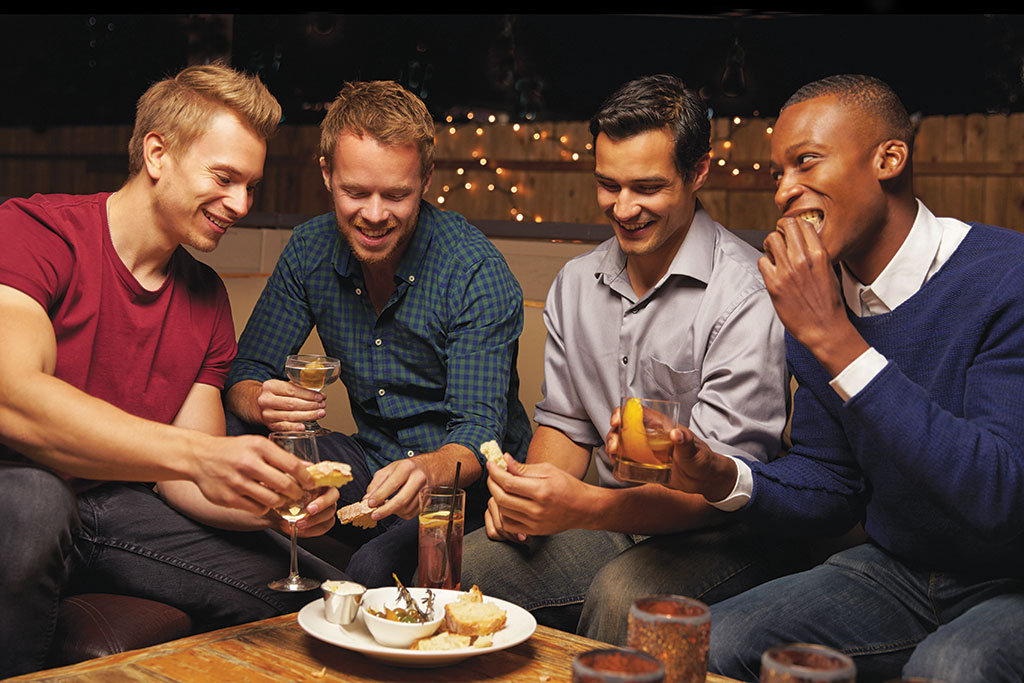 Napa and Sonoma are known worldwide for their wine, but the region's bartenders are also whipping up some of the best new cocktails.

I’m sitting in The Restaurant Bar at The Restaurant at Meadowood, one of the country’s 13, three-Michelin-starred restaurants. The Restaurant, located in Napa Valley, California, has racked up top accolades across the globe for its dynamic dining experience, one where Executive Chef Christopher Kostow has garnered attention for his carefully curated, farm-fresh creations, as well as an elegant atmosphere and intuitive, unparalleled service. Here, the sommelier pairs the tasting menus with fabulous (and expensive) wines from some of the world’s top vineyards, only pouring varietals that match the highbrow palate of its discerning guests. While the dining experience is exceptional, it’s only half the adventure. In the bar, I’m taking a break from vino, and properly knocking-back cocktails. The Restaurant bar serves some of the region’s most innovative cocktails, rivaling hot spots like San Francisco and Los Angeles. Five years ago, there wasn’t much thought put into cocktails in Napa, but here and at other bars, restaurants, and lounges in Napa Valley and Sonoma County they serve creative, flavorful, and hand-crafted libations, proving the region isn’t just all about wine anymore. Welcome to the craft-cocktail revolution. 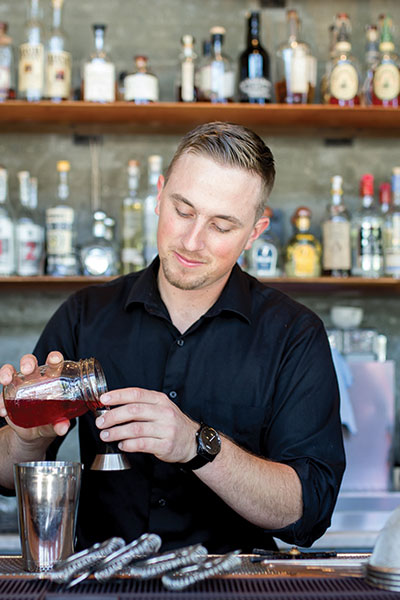 When Napa Valley and Sonoma County began serious wine production in the 1850s, the region began to flourish as one of the top wine producers in the country (California produces 90 percent of American wines). Prohibition hit the valley hard, but it made a strong comeback after the repeal, and legends like Robert Mondavi were born. With rolling vineyards, rustic resorts, and intimate tasting rooms, Napa and Sonoma have prevailed as a hot spot for wine and food lovers. One does not visit the region without drinking a glass (or bottle) of wine, but spirits movers and shakers like Spoonbar and Goose & Gander had begun putting craft cocktails on the map, and other bars have slowly followed suit. Visitors can immerse in a world of exceptional spirits-based libations now that the craft cocktail scene has fully emerged.

No one really saw it coming, especially in Napa and Sonoma. When the craft-cocktail scene made an impact in nightlife in the early 2000s, it triggered a global phenomenon where mixologists began exceeding expectations with their libations by being more creative and experimental. Cocktails were exciting, fun, and, most importantly, appreciated. Now, whether a storied hotel bar or swanky lounge, mixologists are making a name for themselves by slinging delicious and notable craft cocktails that utilize local spirits and fresh, house-made ingredients. Considering Napa and Sonoma’s commitment to wine production, cocktails were never a priority, but thanks to the creative minds of local bartenders, mixologists, bar owners, and restaurateurs, visitors can enjoy unique versions of classic cocktails and other impressive, thoughtful creations unique to these respective watering holes.

The craft-cocktail scene in Napa Valley goes back to 2007 when Napa Valley Craft Distillery opened. The distillery brought something new to the destination, vacuum-distilled vodka and gin, which not only pleased locals, but also visitors who were wine-phobic and wanted great cocktails made from local spirits with their meals. When Goose & Gander opened in 2012, they truly helped establish the craft cocktail scene in Napa Valley. In the quiet town of St. Helena, the restaurant/lounge opening was highly anticipated considering Kelly McKown was getting behind the kitchen, but equally headline-worthy was the cocktail menu created by Master Mixologist Scott Beattie, author of Artisanal Cocktails and a pioneer of the craft-cocktail movement.

In the lively basement bar, fresh and original cocktail concepts are served with fresh herbs and hand-carved ice, with science driving the inspiration for the elixirs. “Whether it’s pickled huckleberry in the refreshing cucumber Collins or a winter-spiced syrup for our house old fashion inspired by a trip to Bali,” says Bar Manager Andy Florsheim, “the bar team is always trying to push the envelope while keeping the integrity of the classics.” The most popular drink locals have become obsessed with is Hora De Horo (Golden Hour). It has the citrus forward body of a margarita but with many more layers of unique flavor. They create the tequila cocktail with an agave syrup with orange-zest chipotle chilis and warming cinnamon, then add a small hint of apricot liquor and round the drink out with some sherry. A small chipotle powder rim on one side of the glass is the final touch. 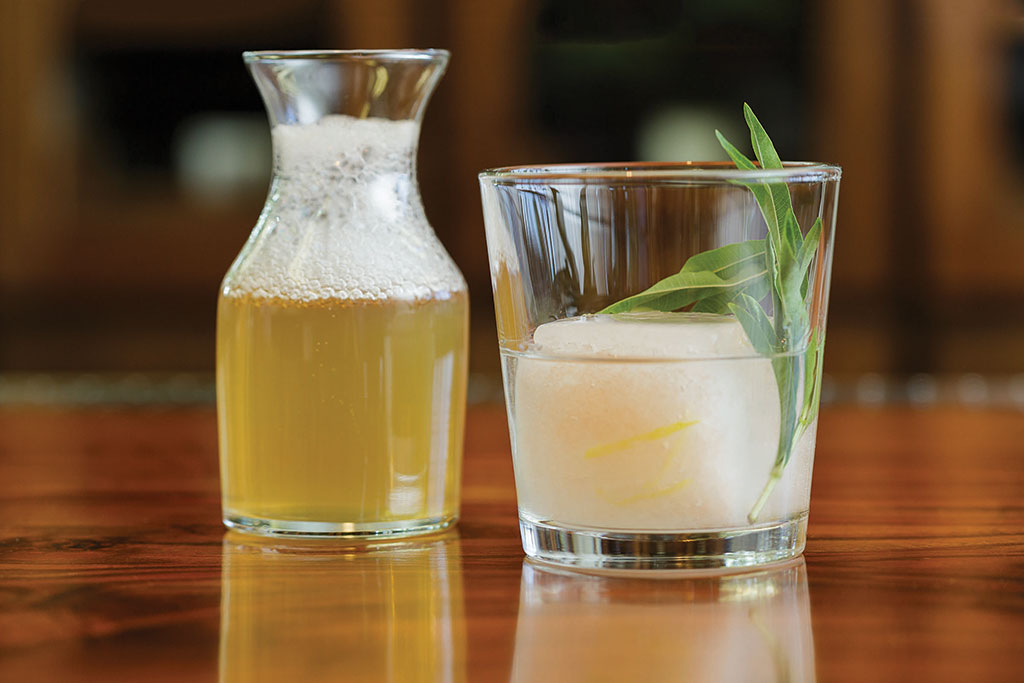 One of the most popular places for a cocktail is at The Restaurant Bar at Meadowood. The five-star property is unarguably the most luxurious hotel in the area, frequented by celebrities and jetsetters for its stylish rooms, three-Michelin-starred restaurant, and a brand-new pampering spa. It’s also a preferred after-hours scene for cocktail lovers. Just as the restaurant’s dining program is exceptional, so is the spirits program. Bar Manager Sam Levy says, “We don’t have names for our cocktails; we just list the ingredients so sometimes people come in and ask for the brown-butter thing. They ask about it while wine tasting, or had it last time they joined us. One of our most asked-for drinks is not always on the list, but we always keep a little of it around just in case. I nicknamed it Whiskey for breakfast. It’s a brown-butter infused bourbon with maple syrup steeped with sassafras, oak chips, and sarsaparilla. There is also aged balsamic and lemon juice, and we serve it on ice.” Cocktail aficionados are impressed with the bar’s cocktail ethics: they are constantly refining their drinks, collectively paying attention to the fruits, herbs, and house-made ingredients (they make their own bitters, syrups, infusions, liquors, distillates, and drinking vinegars in-house). Not only can guests expect thoughtful cocktail concepts, there is also notable balance and depth of flavors.

At PRESS, gin lovers are in for a treat. The contemporary restaurant known for its steaks (procured from legendary butcher Brian Flannery) created an exciting cocktail menu with a gin and tonic that deserves attention on its own. Debuted in spring 2014 by Head Bartender Nathan Sundquist, the thoughtfully concocted gin and tonic features gin from the original distillery Number 209 (founded in 1882 in St. Helena and now based in San Francisco). This particular gin produces more citrus and floral notes instead of the traditional juniper, so mixing it with the house-made tonic truly complements the flavors. They also add cinchona bark (the natural ingredient used to make quinine), along with lemongrass, lime zest, some sugar, and citric acid, and voila: the perfect gin and tonic is created. The gin is then served on top of a large ice cube infused with lime, with the tonic in a side carafe for guests to add as much (or little) as they like. The result is a twist on the classic that doesn’t have the medicinal taste of a traditional gin and tonic.

On The Cocktail Trail Napa & Sonoma was last modified: September 13th, 2016 by millawynn