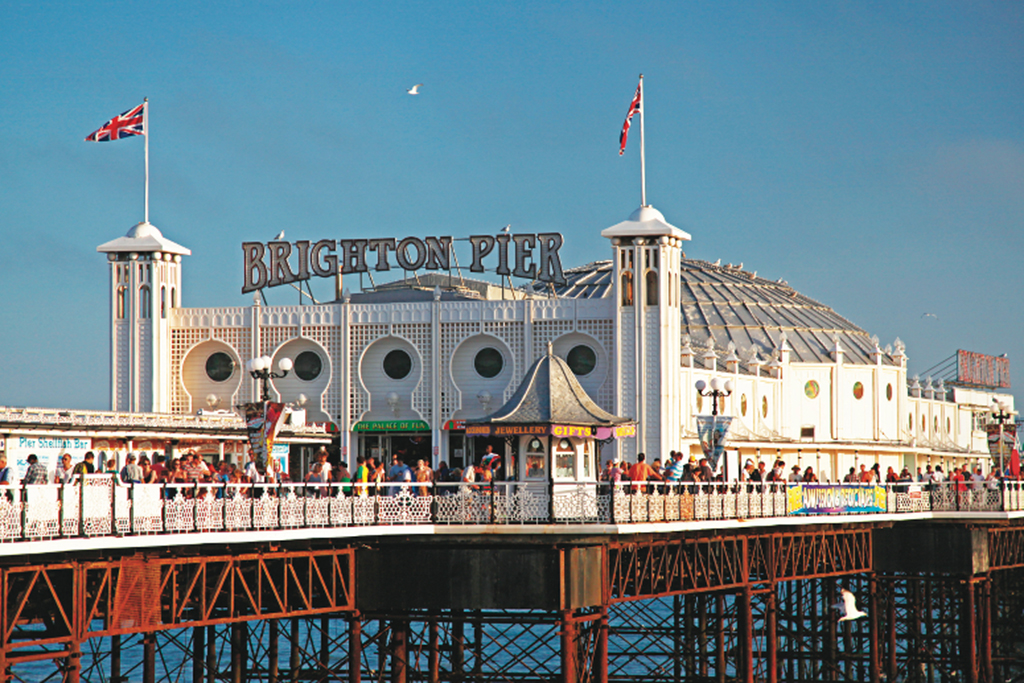 Artsy, liberal, laid-back Brighton is London’s coolest cousin; and it won me over in just one weekend.

Artsy, liberal, laid-back Brighton is London’s coolest cousin; and it won me over in just one weekend.

More than a seaside resort, its famed Brighton Pier (www.brightonpier.co.uk) offers an amusement park at one end, and cafés, shops, crowds, and fish and chips everywhere else, no matter what the weather. The Pier’s adjacent beach is long, wide, and free, the English Channel laps serenely at its rocky shore, and there are umbrellas, mats, and chairs to rent and people to watch. Should you prefer to see more of them, you might try the very private nudist beach a mile east, Cliff Naturist Beach. It’s shielded from the road and very popular with you know who.

That gay demographic is considered to be about 30,000 strong in this city of 250,000, so let’s call Brighton über-gay- friendly. One of the first cities in England to offer marriage equality meant that many early civil partnership ceremonies were conducted here. The city was also the one-time hangout of Oscar Wilde, who stayed at the seafront Royal Albion Hotel (www.royal-albion-hotel.co.uk) in the latter part of the 19th century. Unfortunately, the Regency-style hotel with its original columns and balconies is a bit sad and faded, these days.

To the west of the Pier, on the lower promenade, find the Artist Quarter(www.theartistquarter.co.uk), where more than a dozen artists produce and sell from their individual “arches,” aka shops. Ceramics, furniture, blossom paintings, you name it, are here.

Buy something, then celebrate at the city’s best gay bars, conveniently nearby: Legends (www.legendsbrighton.com), A Bar (www.abarbrighton.co.uk), and the less expensive Bar Revenge. Around the corner is Club Revenge (www.revenge.co.uk), the city’s biggest nightclub. It features dancing and occasional floor shows.

Brighton’s top dazzle is The Royal Pavilion, built by George IV before he became a full-fledged king. He used it for assignations with his mistress, (a Catholic he was not permitted to marry), and for elaborate entertainments. You may need sunglasses inside to look up at the 30 foot chandelier in the banqueting room, decorated with carved dragons and dubbed “a diamond blaze.” Under it sits a table about as long as a tennis court, set with silver, gold, crystal, and the usual royal palace tableware glitter.

The red-and-gold Chinese-inspired music room was the scene of one of the first six gay weddings celebrated in the UK, in 2014. Stand on the hand-knotted Axminster and check out more chandeliers. These are all lotus shaped, and the large central one is encrusted with thousands of glimmering small shells. You can also choose to get married here or in one of the Palace’s many other spaces, but don’t overlook the sign out front: “No confetti please.”

For a nice break, check out the very genteel upstairs tea room, and when you’re through taking in the posh, meander through the estate grounds to the Brighton Museum and Art Gallery (www.brighton-hove-rpml.org.uk). Find art nouveau decorative design, classic 20th-century furniture, Henry Willett pottery, and a gallery showing celebrations from around the world.

While there is no single major exhibition space in the city, nearby is the University of Brighton Gallery (www.arts.brighton.ac.uk) with its mix of student and big-name artists’ works. Design, photography, sculpture, you’re likely to see eclectic everything in this modern glass-and-steel building.
Some smaller galleries are located in the North Laine, the more arty and bohemian area north of North Street. The Lanes, between North Street and the sea, is the historic area. Forget the spelling discrepancy and get happily lost in the network of narrow streets and alleyways, with their surplus of quaintness, their bygone era mix of pubs, cafés, and shops, including many antiques.

On Regent and Kensington Streets in the North Laine, is a legal display of graffiti on one side of the street. Just outside the Lanes on Duke Street, is Fabrica(www.fabrica.org.uk), featuring large installations in the interior of an old church.

While here, you’ll want to make a chocolate stop at Choccywoccydoodah(www.choccywoccydoodah.com) or pick out a greeting card at Creasedcards(www.creasedcards.com), which has some of the cleverest on the planet. Head then to Church and Bond Streets to Gresham Blake (www.greshamblake.com), the bespoke gentlemen’s outfitters, where while you are measured for your finery, you might actually spot residents Nick Cave or Fat Boy Slim being measured for his.

For footwear to go with your new outfit that’s kind to our four-legged friends, head over to Vegetarian Shoes (www.vegetarian-shoes.co.uk) in the North Laine where no cute animals were killed to make any of the boots or slippers they sell. It’s one of a kind in the UK.

Also one of a kind is 64 Degrees (www.64degrees.co.uk) on Meetinghouse Lane. Chumps? Rump? Fregola? They’re not shoes. It’s not a dance. It’s lunch! Considered by foodies to be the most exciting dining spot in the city, you’ll be rewarded by the brilliant way mundane chunks of beef, pork, fish, or chicken have been transformed into beautiful, tasty jewels on the plate in front of you. Sit on a stool and sip Picpoul or Malbac while watching cute guys in black aprons fuss over each work of culinary art, incorporating precisely the bit of fregola needed. The headwaiter Chris, a dead ringer for George Clooney, is also good for the appetite.

For a more traditional dining experience, the New Steine French Bistro(www.newsteinehotel.com/restaurant) is like being invited to a friend’s place; dinner is served in a cozy dining room with a bay window and a fireplace. For traditionalists, a sirloin steak with chips, for the more adventurous, skewered St. Jacques with chorizo, rice, and spinach timbale. For everyone, the crème brûlée is also highly recommended here.

Across the street from a betting parlor is an elegant white-tablecloth restaurant perfect for celebrating a win. 24 St. Georges Restaurant (www.24stgeorges.co.uk) is also its address. Your plate arrives, looking pretty as a picture and tasting like it should win a Certificate of Excellence, which it did, in 2014. It’s featured in Michelin and considered number one in Brighton.

Where will you stay? There are large luxury hotels like the Grand (www.devere-hotels.co.uk) or the Hilton Brighton Metropole(www.placeshilton.com/brightonmet), but sometimes the small places are much cozier and save you from credit card shock later. A ten or 15-minute walk from everything is Snooze (www.snoozebrighton.com), a gay-friendly, homey, hip guest house. Hats off to the courage of using the entire color wheel in the same room, for flea-market items cleverly turned into retro élan, and also to the great English breakfast, the warm welcome and friendly atmosphere here.

Tempted now to visit Brighton? Oscar Wilde wrote, “The only way to get rid of temptation is to yield to it.” Next time you’re in London, do.