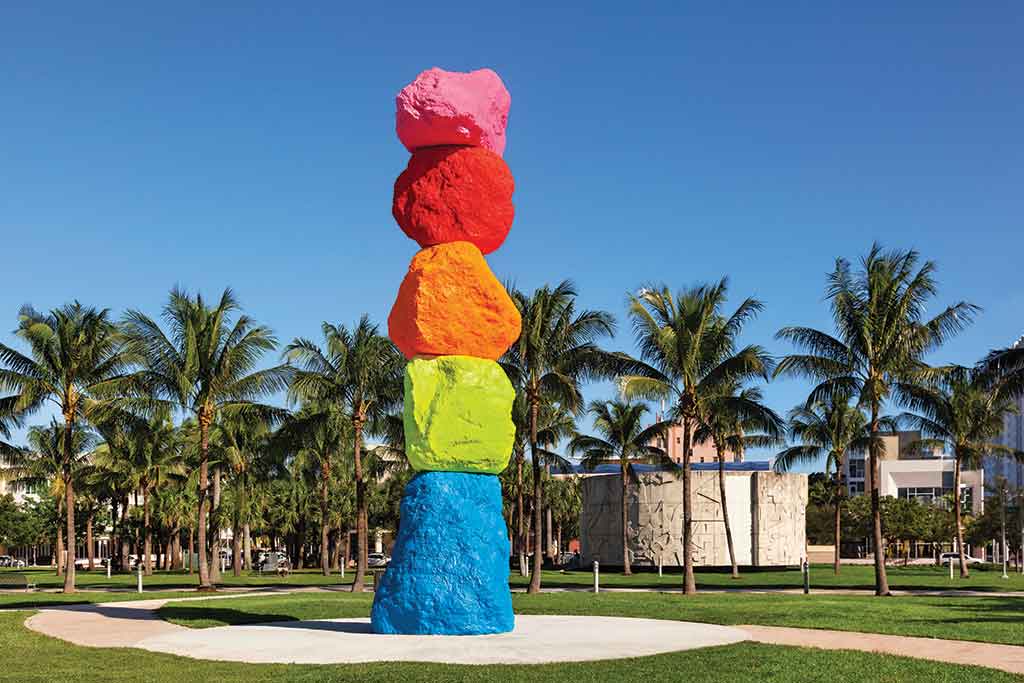 On my ﬁrst morning in the city, I met up with my long-time friend/partner-in-crime/occasional nemesis, YouTube digital storyteller, Davey Wavey for breakfast and together we set off to explore the Miami Design District.

I arrived at Miami International Airport, where I hopped into a taxi and began to wind my way into the city. While the driver provided a soundtrack of Latin American pop music, I stared out the window at swaying palm trees through which appeared the city’s twinkling skyline, staggered with a menagerie of ever-taller skyscrapers that appeared far more impressive than I had recalled.

In just under 20 minutes, I had arrived in downtown Miami and found myself standing in the lobby of the chic new ME Miami Hotel (www.memiami.com), one of only three Melia hotels in the United States. As a fan of the hotel’s properties in Europe, I was curious to see how Melia translated their aesthetic to America, in general, and to Miami, in particular. In the ﬁnal analysis, I discovered that the answer to my query was seamlessly sexy, modern, stylish, and sophisticated are trademark characteristics of the Melia brand, and my accommodations in one of the hotel’s Style Suites ticked every one of those boxes. From the modern, minimalist décor and mood lighting to the walk-in closet, sumptuous bathroom and spacious terrace with views of Biscayne Bay, the Me Miami provided the ﬁrst indication that I was en route to discovering a new and different side of Miami.

On my ﬁrst morning in the city, I met up with my long-time friend/partner-in-crime/occasional nemesis, YouTube digital storyteller, Davey Wavey for breakfast and together we set off to explore the Miami Design District (www.MiamiDesignDistrict.net), a burgeoning neighborhood just north of downtown, and less than 10 minutes away from South Beach, that has become a major hub of art, design, luxury retail, and ﬁne dining.

Fashionable upmarket brands including Gucci, Hermès, Dior, Tom Ford, Christian Louboutin, and Loewe commingle with highend design showrooms and trendy restaurants in a swarm of fabulous that can quite easily consume a heady afternoon in this trendy hamlet so shiny and new that locals are only now experiencing it themselves for the ﬁrst time.

The recently debuted Institute of Contemporary Art, Miami (www.icamiami.org) features a stunning metallic façade and larger-than-life-size street-level logo that could be an art installation in and of itself. Chock full of signiﬁcant works by renowned artists, the ICA collection is at once a celebration of international contemporary art as well as a paean to the cultural life of Miami. We could quite easily have spent hours at the museum, but after taking in all three ﬂoors of the collection and spending more than our fair share of time tooling around the sculpture garden on a glorious Miami afternoon, it was time to get ready for dinner with friends at NaiYaRa (www.naiyara.com) a buzzing bistro in Miami Beach, specializing in tasty Thai street food and masterful cocktails.

The next day, Davey and I decided to explore the more historic side of Miami, starting with Little Havana. I, of course, had the hit Camilla Cabello single “Havana,” playing in my head as we descended upon the legendary neighborhood, but I spared Davey the full extent of my enthusiasm by not singing the chorus out loud.

Our ﬁrst stop was Calle Ocho, the main drag of Little Havana, which is dotted with cigar shops, art galleries, fruit stands, bars, and cafés, and a Hollywood-style Walk of Fame with stars dedicated to Latin celebrities. A world unto itself, there is a noble air of nostalgia in Little Havana that has remained unaffected by blowback from its more cosmopolitan surroundings. It’s quite intoxicating really. Almost like stepping into a parallel Miami.

Speaking of which, for lunch, we ducked into Versailles (www.versaillesrestaurant.com) a Little Havana staple, for an authentic Cuban lunch. Over chicken and steak topped with onions and tangy Cuban Mojo, plates of rice and beans, and grilled plantains, we settled into a booth and tucked in like locals at the institution that for more than four decades has been known as the meeting place for Cuban exiles. Though tempted to sample pastries from Versailles’ celebrated bakery for dessert, we opted instead to head back down Calle Ocho to sample the wildly popular ice cream at Azucar Ice Cream Company (www.azucaricecream.com), an artisanal ice cream and sorbet boutique notable for serving more than one hundred ﬂavors. Take that Baskin Robbins! Davey ordered a scoop of Dulce de Leche and I had Almond, though we both agreed that the sweet shop’s Birthday Cake ﬂavor was pretty spectacular. In the end, we decided that both our choices were winners.

The following evening, we paid a visit to the Gaythering (www.gaythering.com), which holds the distinction of being the only gay hotel in Miami Beach. Prominently located on a discreet corner just blocks away from the beach, the Gaythering boasts premium accommodations in multiple price categories, a clothing-optional, men-only sauna and steam room, as well as its own bar, appropriately called Bar Gaythering, in which guests and locals alike are invited to “gayther.”

After drinks, we headed over to the hipster Wynwood arts district for an al fresco dinner at Chef Rocco Carrulli’s R House (www.rhousewynwood.com), a combination restaurant, gallery, performance venue, and meeting space that has become one of the up-and-coming area’s most notable destinations. Formerly the
owner and chef of Edwige at Night restaurant in Provincetown, MA for 13 years, Carrulli has brought his ﬂair for combining rustic Southern Italian plates with modern farm-to-table American dishes to Miami’s Wynwood neighborhood with unabashed gusto. 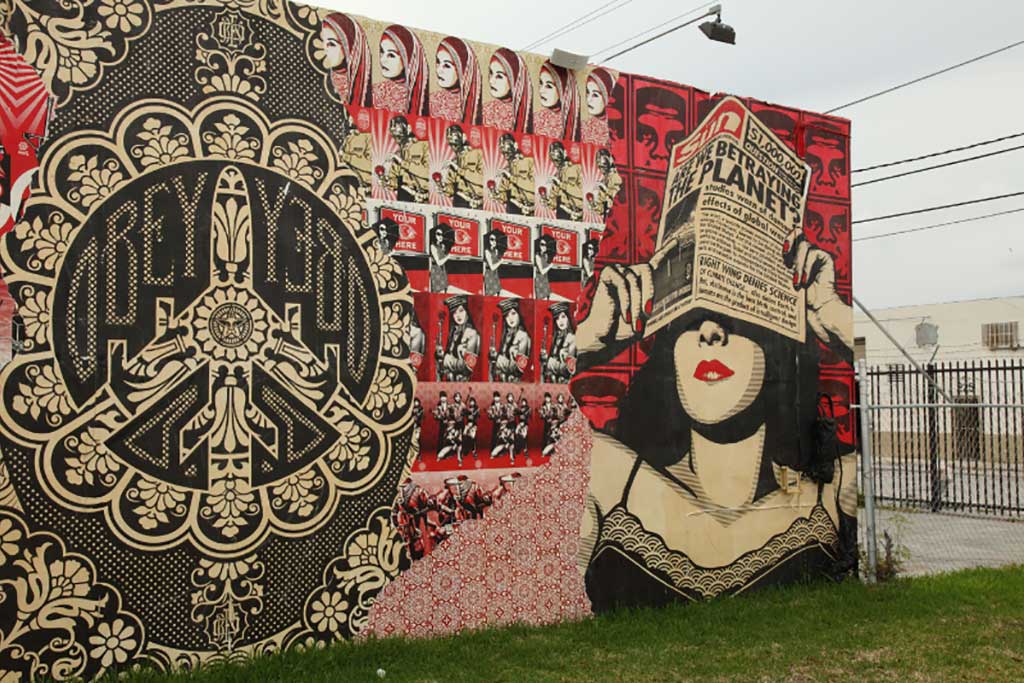 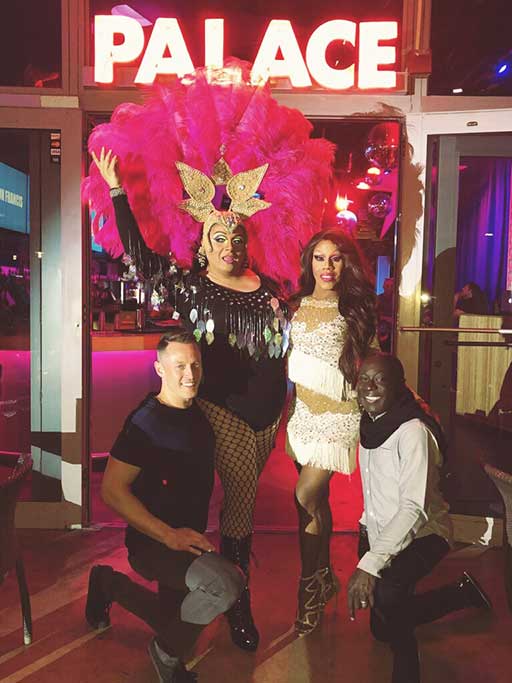 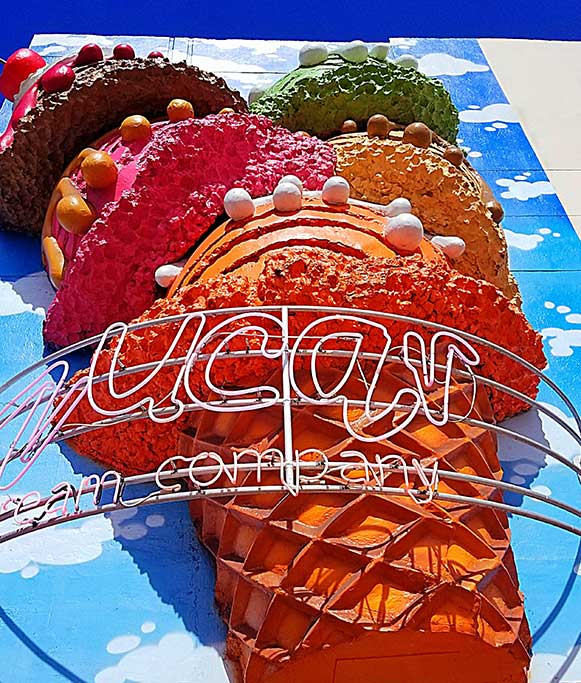 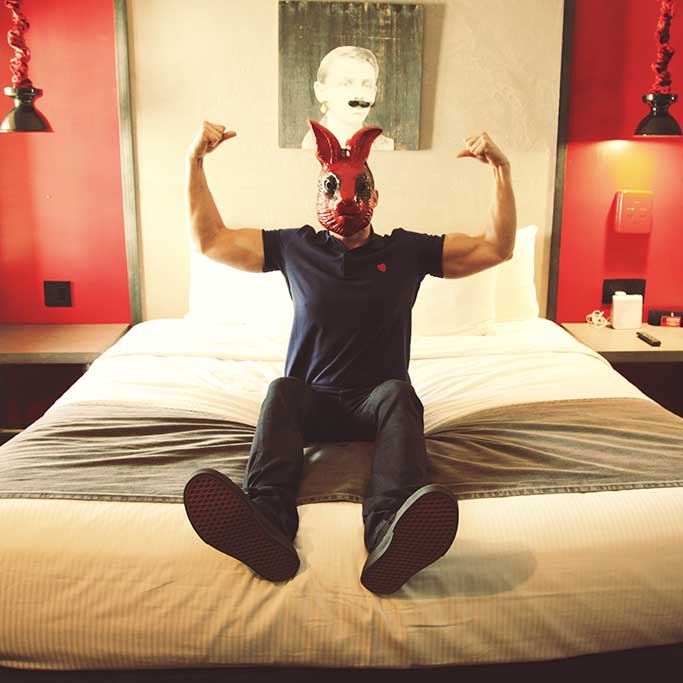 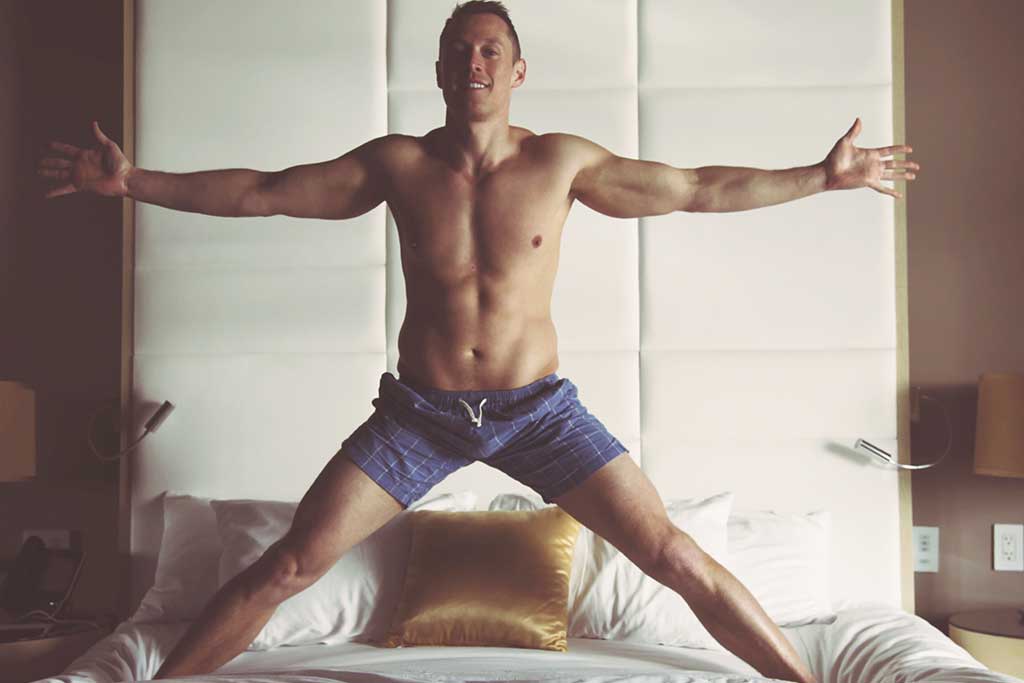 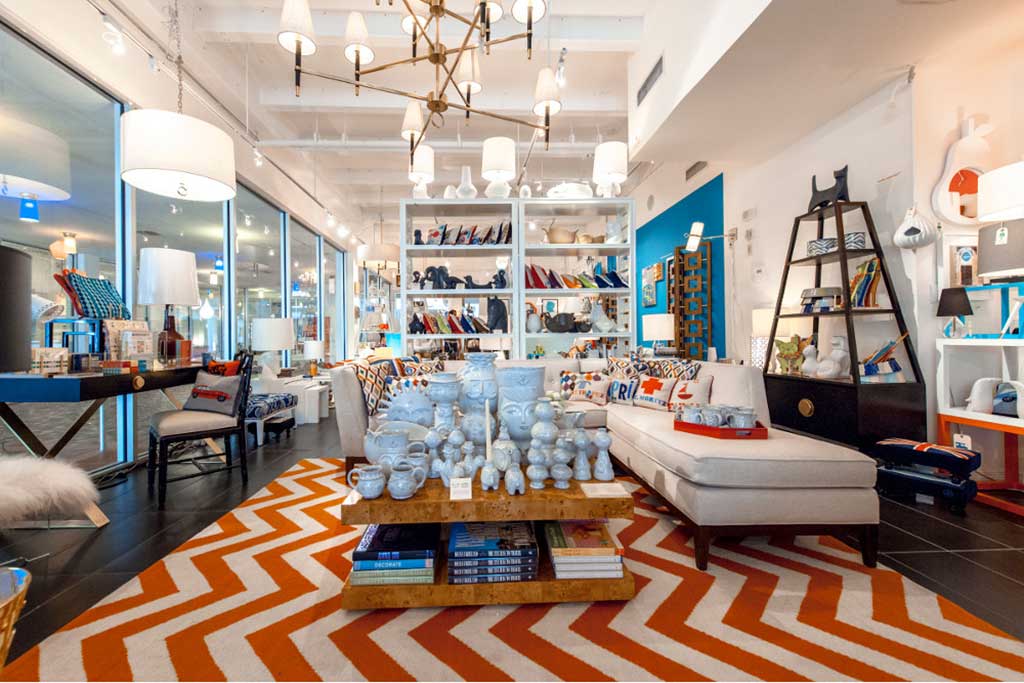 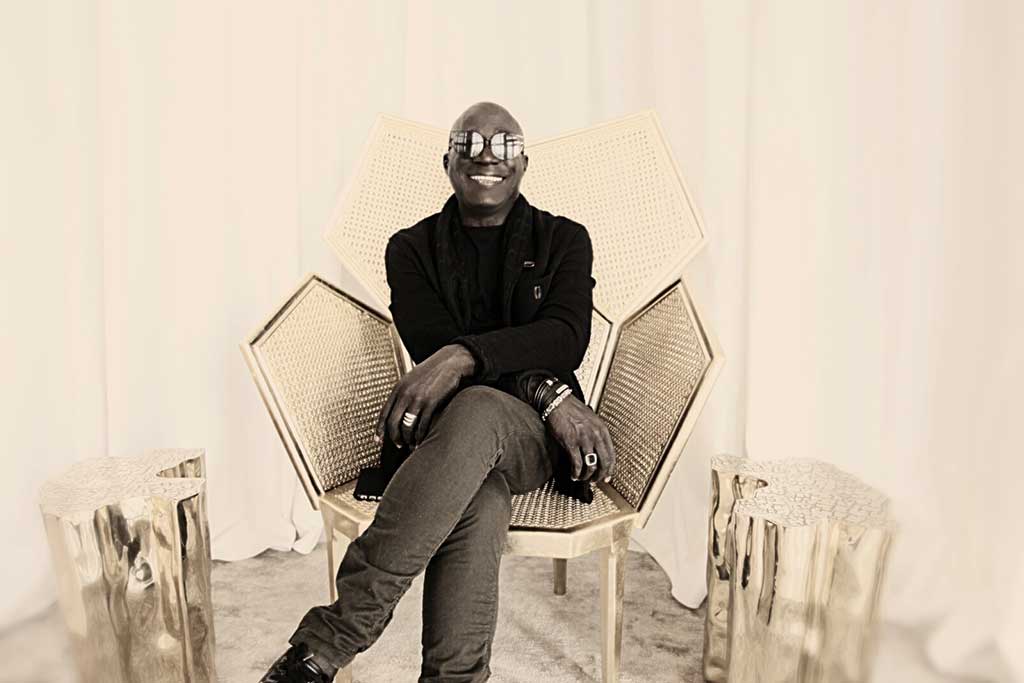 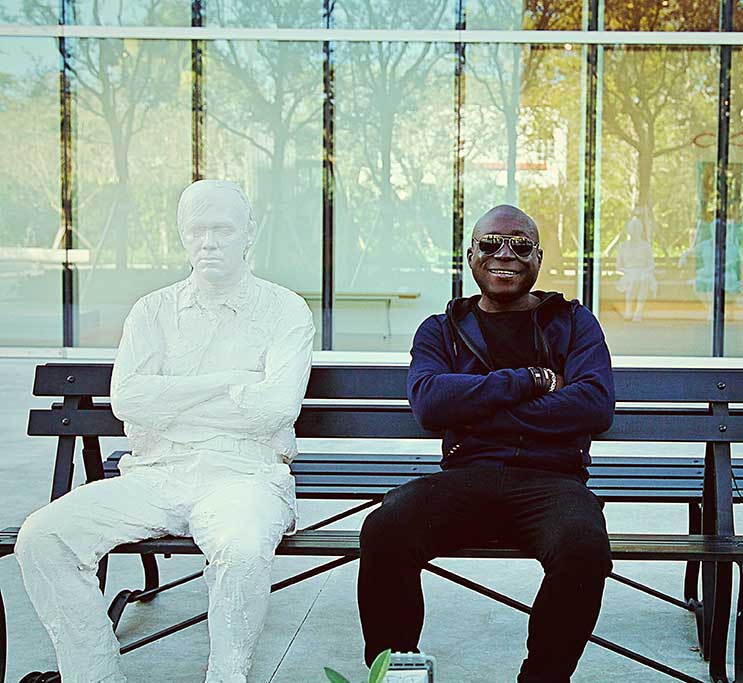 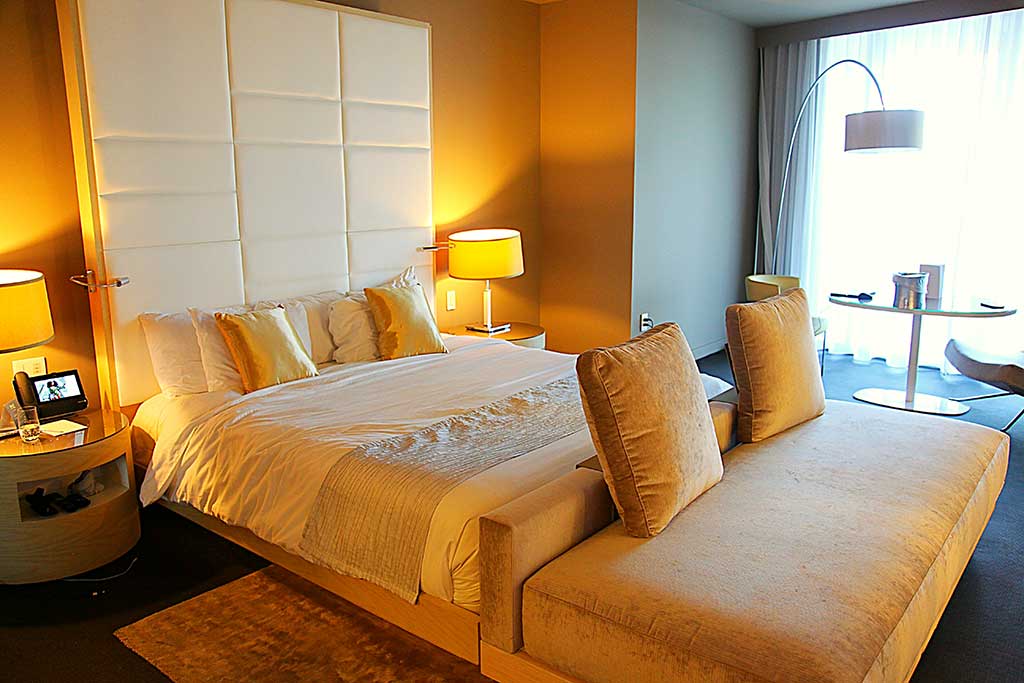 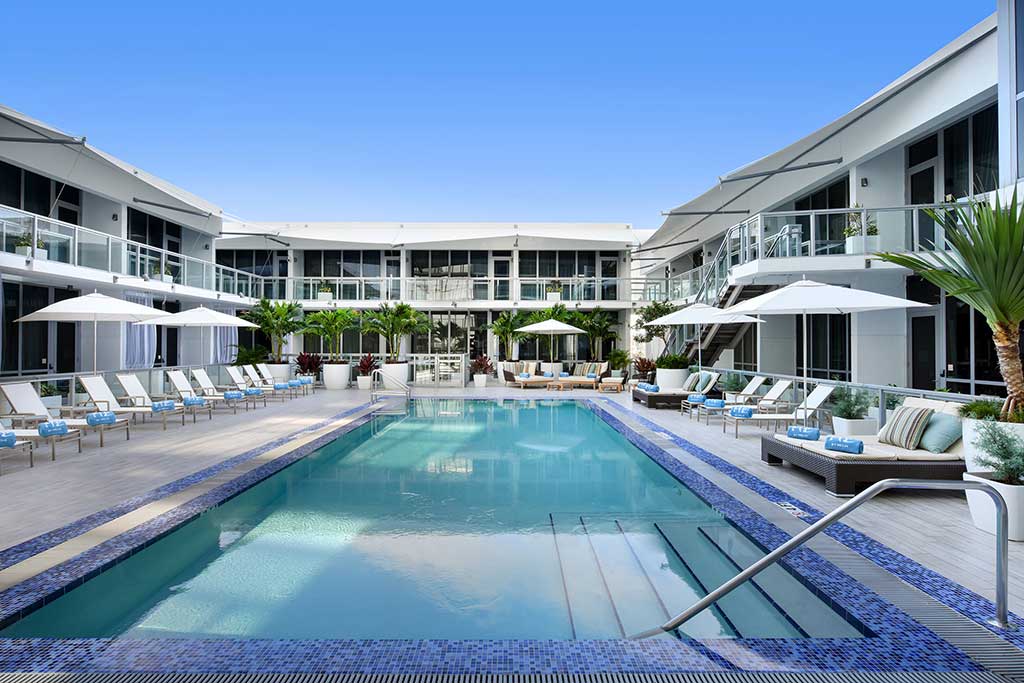 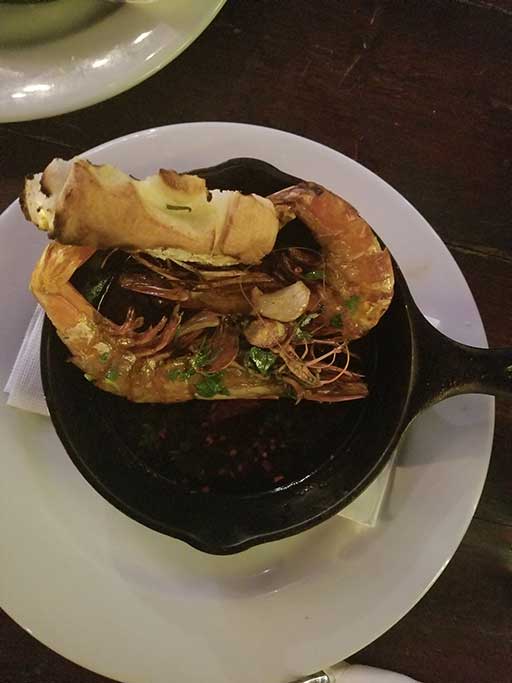 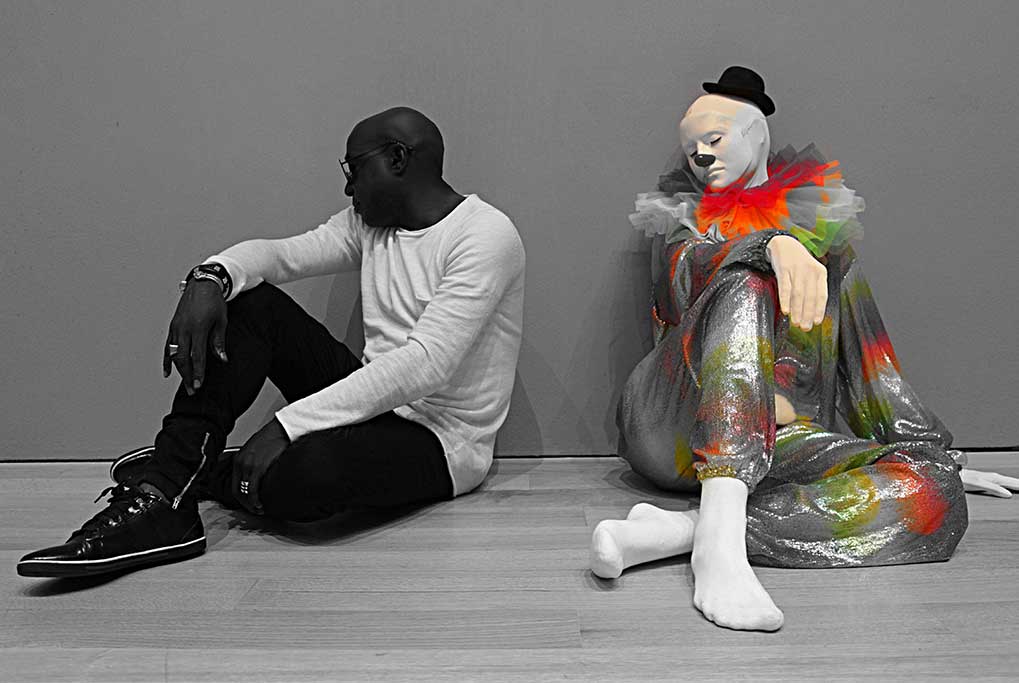 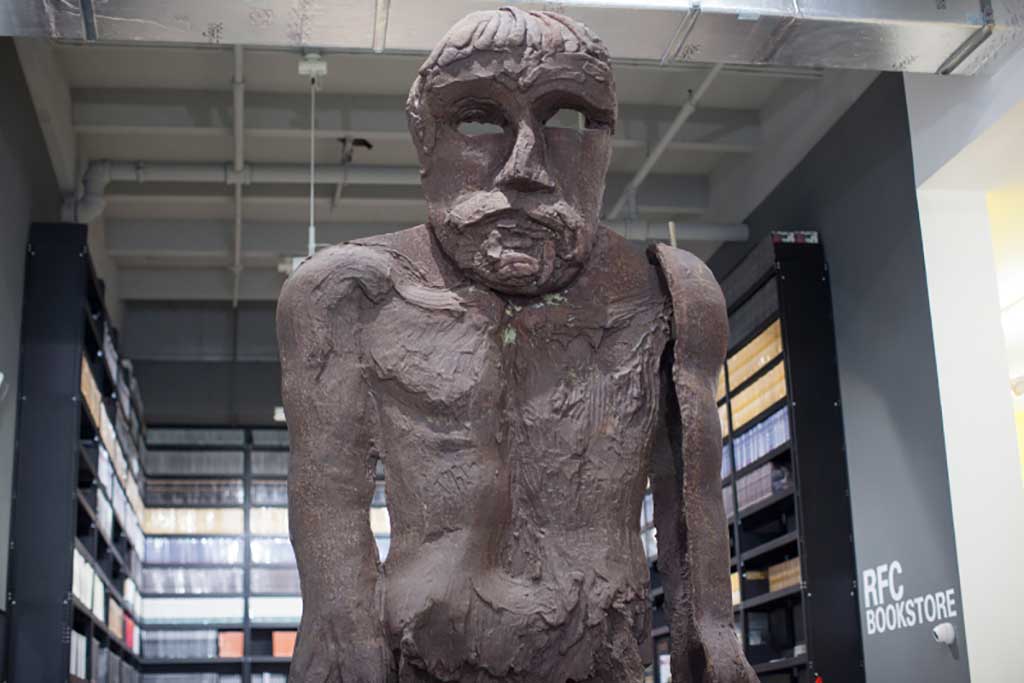 Our menu choices for the evening included: spicy garlic gamberetti, pan-seared tiger prawns drizzled with olive oil and sprinkled with chili ﬂakes, parsley, and lemon; crispy aea cakes comprised of scallops, shrimp and lump crab meat served with a bright mustard aioli; and a fragrant, stew-like Brazilian moqueca ﬁlled with more locally sourced seafood accented by herbs, ginger, and coconut milk. Food aside, perhaps the most attractive asset of R House is that it lives up to its promise of seamlessly blending good food, local art, and lively music into a single hotspot that regularly attracts an artsy and attractive international crowd. And that is why it is the perfect jumping off point for exploring one of Miami’s coolest neighborhoods.

On our ﬁnal day in Miami, we returned to Miami Beach to check out the recently reopened The Bass (www.thebass.org) and the featured exhibition of mixed media artist Ugo Rondinone. Ideally situated to take advantage of the best that South Beach has to offer, this fun, contemporary art museum resides at the crossroads of the sultry sands of the beach, the edgy Collins Avenue and Ocean Drive shopping district, and a lively bevy of restaurants and cafés, making it the perfect way to blend a little culture into a day at the beach, as we did.

From there it was off to a command royal engagement to experience a different kind of culture (drag culture to be precise) at the new location of the world-famous Palace Bar (www.palacesouthbeach.com). This iconic Ocean Drive institution, known for its nightly drag shows and wild Sunday drag brunch, lights up South Beach days and nights with a never-ending parade of sequins, wigs, hot men, and strong cocktails.

Though we would like to have spent more time paying homage to the fab queens at the Palace, we had one ﬁnal stop to make at a party on the rooftop of W Miami (www.wmiamihotel.com). Perched high atop the 50-story hotel in downtown Miami, the Whisper Cocktail Lounge is a splashy, see-and-be-seen party destination showcasing stunning views and a rotating crew of hot DJs that keep the party pumping well into the night.

After mixing it up at the party, we began the walk back to our hotel and unexpectedly discovered a narrow alley behind SE 1st Avenue that revealed the ﬁnal treasure of our visit. Occupied by a string of cozy restaurants of all varieties, this charming alley evoked memories of similarly tightly knit constellations of eateries in far-ﬂung destinations ranging from Nice and Mallorca to Mykonos and Ibiza. We stopped in at Meraki Greek Bistro (merakibistro.com), grabbed a table outside under twinkling lights and noshed on salads, hummus and tzatziki in an atmosphere redolent with the joie de vivre of Mamma Mia. What a pleasant surprise.

A starry night, fresh, deliciously authentic food, and a spirited crowd—this was the perfect finale to our Miami trip, where a plethora of exciting experiences await visitors to this brilliantly colorful, world-class destination of dazzling art and culture, seductive nightlife, and fine dining.

Find out more about the latest in Miami at
http://bit.ly/2HssooC 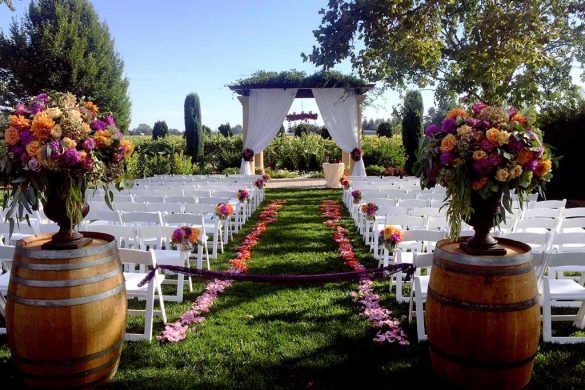 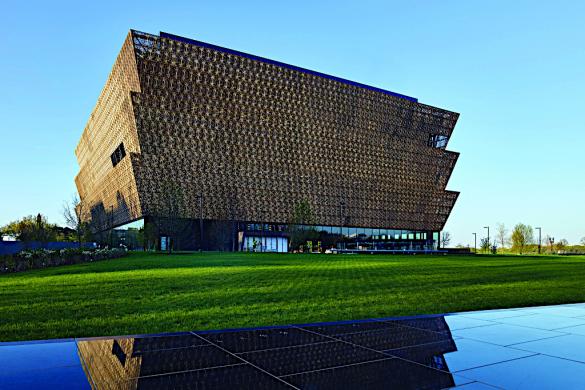 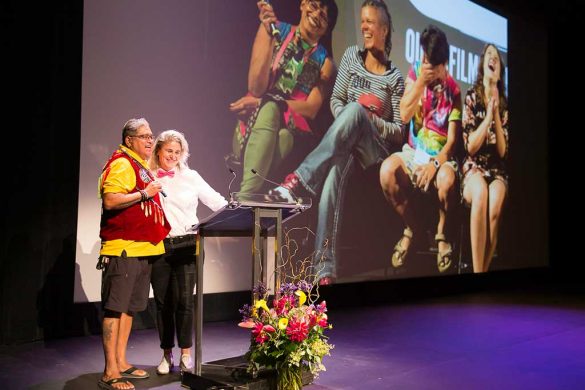 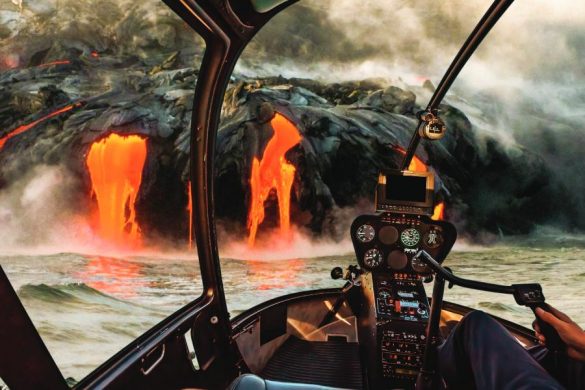