As my partner John and I settle into a dining room at The Plaza in Seoul, Korea, the hotel’s public relations manager, Nayhe Kim, leans into the table and says, sotto voce: “I have to admit, I’m a little surprised. Do Americans really come to Seoul on vacation?”

It’s a fair question. With the exception of those Korean-Americans who visit to keep in touch with their families and heritage, most US visitors to Seoul over the past two decades have been military and business travelers. The tourism trade has focused on attracting leisure guests from within Korea and from other Asian countries.

That helps explain the fine dining options at The Plaza: Shanghainese, Japanese, and remarkable Italian at Tuscany (of all Western cuisines, Koreans have the strongest affinity for Italian—the noodle is a culinary common denominator).

Kim laughs delightedly when we sheepishly confess we’d been expecting to find Korean food here. “Business travelers expect things that are very cosmopolitan in Seoul hotels,” says the University of Hawaii–educated Kim. “And many of our Korean guests have Korean food all the time, so they want something different here,” she insists.

That said, by the time we’ve downed our last silky ribbons of tagliatelle, Kim had enthusiastically marked up our city map, flagging favorite spots for homestyle Korean dishes and major street-food corridors. Her excitement about sharing the city with culturally curious Americans—in town to explore rather than to broker business deals—proves typical of the natives we meet over the next few days. It also helps answer her initial question: “Do Americans come to Seoul on vacation?” Well, not so much…yet. But they should, ohhhh they should.

Seoul is the number one most visited foreign destination for tourists from China, Japan, and Thailand, but because it has yet to make the radar of most vacation-planning Americans, it offered us an unusual and appealing combination: a busy, first-class city that gave us bragging rights for visiting someplace most of our well-traveled friends had still never been. Seoul is comfortably familiar, yet thrillingly foreign all at once.

To be honest, John and I had decided to check out Seoul primarily because a trip to Vietnam had us touching down twice at the city’s gobstopping Incheon International Airport. A major connecting hub in Asia, Incheon incorporates a skating rink, spa, and a museum; and it’s been rated the best in the world for each of the past nine years by Airports Council International. Why not take a layover in a bonus country instead of just passing through?

As it turned out, our long weekend in the Korean capital proved a highlight of our trip, and it’s a city we look forward to revisiting to further delve into its history and traditions.

On this first visit, we merely scratched the surface, finding ourselves quickly enamored of Seoul’s stunning juxtaposition of the futuristic and the ancient, its efficient public transit system, the extraordinary professionalism of its hospitality workers, and its emergent gay scene. After the challenging environs of greater Saigon and Hanoi, Seoul felt like a refreshingly easy destination to explore.

Just wandering in central Seoul and gawking at the architecture is worth a day in the city, with one outlandish gleaming building popping up after the next. The GT Tower has a wavy, undulating exterior that flows like a liquid; the Boutique Monaco apartment complex’s cubist exterior is like a metallic Jenga game; the Jongno Tower has a floating circular 33rd floor that hovers over downtown like a UFO.

Seoul’s new City Hall, which opened in 2013, feels like a government endorsement of wild style with its swooping glass exterior. Described by some critics as “tsunami shaped,” its public lobby mixes Blade Runner-esque metal grid framing with monumental, but child-like chandeliers of glass bubbles. The public art on display at City Hall courtyard included giant inflatable teddy bears and huge porcelain snails with tiny human figures perched on their heads.

The downtown is bisected by the seven-mile-long Cheonggyecheon, an urban creek flanked with illuminated public walkways, which is the site of a lantern festival each November.

If you need some grounding after all the space-age aesthetics of modern Seoul, worry not. Walk just a quarter mile, and you’re in the palace district, where five ancient royal residences dating as far back as the 12th century are open for public viewing.

After watching the colorful, mustachioed changing of the guard at Gyeongbokgung Palace, we spent a few restorative hours wandering the Changdeokgung complex where an elegant assemblage of gates, pavilions, and footbridges fronts a 78 acre “Secret Garden” with over 100 different tree species, lotus ponds, and little hideaway buildings for royal assignations. In autumn, the garden was a blaze of yellows, reds, and oranges—a welcome respite from modern Seoul’s chrome, glass, and concrete. 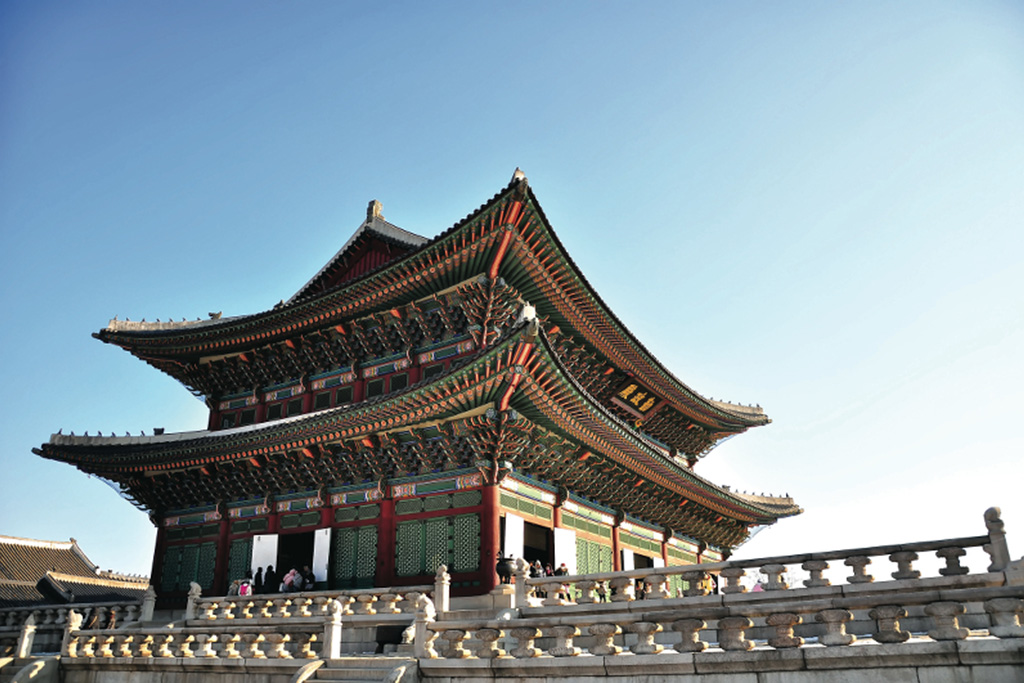 With a metropolitan population approximately 25% greater than New York City and second only to Tokyo, Seoul’s geographic sprawl can feel daunting at first. Perhaps the best place to take in the panoramic hugeness of the city and get a sense of orientation is the 41st-floor observatory lounge at the ultra-modern Sheraton D-Cube City, Seoul’s newest five-star hotel.

The hotel and adjacent D-Cube City complex provide a perfect place to relax after busy days of sightseeing, with its modern sculpture garden, including hillsides planted with hundreds of colorful pinwheels; a phenomenal 27th-floor pool-and-sauna complex perfect for nighttime soaks with the city twinkling below; and a state-of-the-art theater. Seoul is crazy for Broadway musicals, and Korean-language productions of Ghost and Grease were packing in the crowds during our visit.

Built directly above a major station of Seoul’s easily understandable subway system, D-Cube City gives visitors easy access to all of the most popular parts of the city in 20 minutes or less.

If you’re leery of using an unfamiliar subway system, there’s also a hop-on/hop-off Seoul City Tour Bus that does circular routes of the city, stopping at major tourist attractions for an inexpensive daily rate of about $10. We used it one day, but felt deprived of the people-watching pleasures found in an underground heavily utilized by people of all ages and economic strata: Pink-haired punks, couture-dressed middle-aged women, gossiping old ladies, and crazy-hot college boys right out of a K-Pop music video.

K-Pop, the squeaky clean yet sneakily sexy music typified by the boy-band BigBang and the girl group 2NEI, is part of the Korean pop culture boom called hallyu. Encompassing television, cinema, and video games, but typified by K-Pop, hallyu has become an engine of the Korean economy, supported by the government as a phenomenally profitable export.

“In 2012,” writes Korean-American journalist Euny Hong in her smart, funny new book The Birth of Korean Cool, “…government funds constituted over 25% of all venture capital money disbursed in Korea…a mind-boggling third was spent on the entertainment industry, more than on any other sector.”

Despite the fluke success of Psy’s “Gangnam Style” in the US, the production and management conglomerates behind K-Pop aren’t really out to conquer the West. Hong writes: “It’s about getting the crucial but still dormant third-world market hooked on Korean pop culture—Eastern Europe, the Arab nations, and soon, Africa.”

K-Pop is sonically and visually apparent everywhere in Seoul, with young music stars appearing in print and broadcast advertising for a gamut of consumer goods from cell phones and to snack foods to cosmetics.

In a commercial strategy almost incomprehensible to Western minds, young male singers with what appears to be flawless (e.g. heavily made-up) skin serve as spokesmodels in myriad endorsements for women’s cosmetics, with no women appearing in the ads at all.

Travelers looking for an experience of K-Pop beyond its atmospheric omnipresence can visit the headquarters of SM Entertainment, whose top acts include BoA, Shinee, TVXQ, and Super Junior. On Saturdays, in addition to SM’s exhibitions, karaoke rooms, and exclusive video presentations, visitors can attend open public auditions for young Koreans hoping to join the company’s roster of artists.

A visit to the K-Pop Music Exhibition Hall provides an opportunity to check out memorabilia from current acts, as well as placing them in the context of a Korean popular music dating back to 1920.

The Korean brand most familiar to Americans is not a K-Pop act, but Samsung, creator of audiovisual hardware used to deliver K-Pop’s cultural software. We visited the impressive Samsung d’light interactive exhibition hall at the company’s headquarters for a look at new and in-development products, including wall-sized virtual reality screens where we could interact with animated characters in a Tron-like videogame experience.

For a first-hand peek at the “Gangnam Style” that Psy famously parodied in his breakout K-Pop single, visitors will want to visit Apgujeong Rodeo Drive, the high-fashion, upper-crusty shopping street that’s the heart of Gangnam, the Seoul equivalent of Beverly Hills. Gangnam is also where you’ll find dozens of high-end plastic surgery centers for both medical tourists and locals—more cosmetic surgery procedures are performed in Seoul each year than in any other city in the world. In all honesty, the monied, youth-obsessed, highfalutin notion of “Gangnam Style” is more about an attitude than a place, and, frankly, John and I found the neighborhood much less fascinating than many other parts of town.