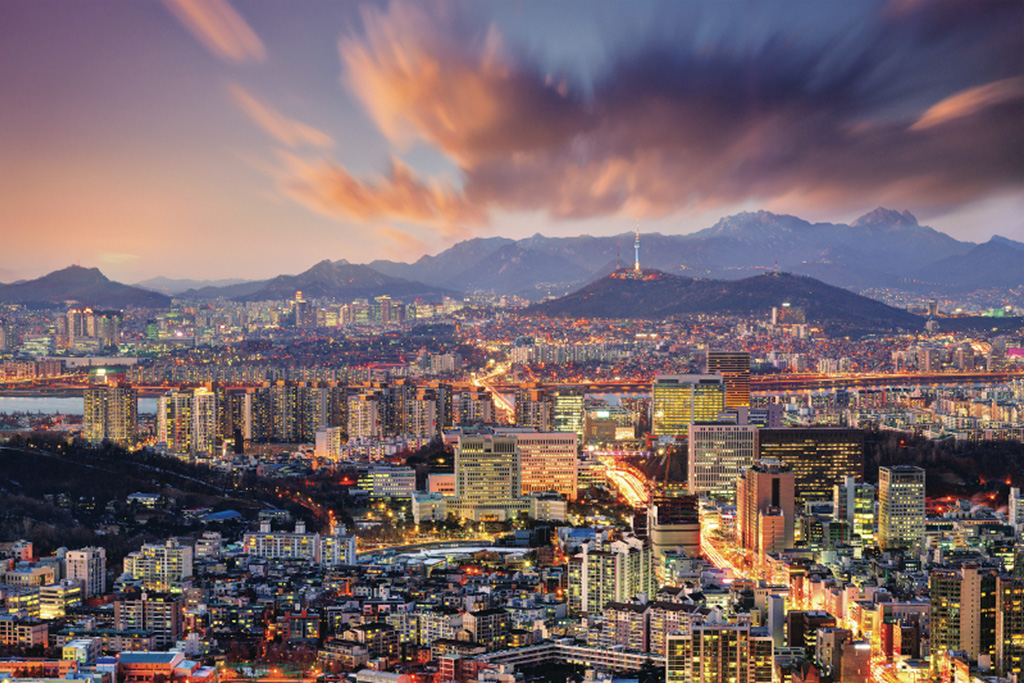 Among the most appealing areas to stroll and shop are the adjacent, centrally located neighborhoods of Samcheong-dong and Insa-dong. If Gangnam is Seoul’s equivalent of Fifth Avenue, Samcheong-dong is its West Village, a low-slung hub of contemporary art galleries, chic casual clothing boutiques, and lively cafes situated alongside the western stone wall of the city’s palace district. Folksy street musicians dot the sidewalks and the pedestrian traffic on weekends provides an ever-flowing runway show of current clothing trends.

Tucked amid the tree-lined alleys of Samcheong-dong, we found Hwagae-gil Street, a block lined on both sides with fashionable cobblers’ shops offering, custom-made shoes, from simple men’s loafers to extravagant women’s stilettos.

To choose a lunch spot, we eyeballed some attractive young Koreans and followed them into Masizzim, a polished concrete jewel box specializing in two delicious stews (short-rib and pork) prepared to your choice of spiciness and served in beautiful earthenware. We were taken aback by the free accompaniment—a big bowl of vivid pink slush the consistency of a half-melted Slurpee. Called dongchimi, it’s essentially radish-flavored granita, and it made a terrific foil to thick, spicy stew.

Insa-dong, centered around a blocks-long, car-free pedestrian zone has an artsy, cool-kid vibe akin to Samcheong-dong, but is also Seoul’s main international tourist district. It’s the easy place in town for a foreigner to navigate, and a showplace for souvenir handicrafts. The neighborhood is a hive of shops selling ceramics, handmade paper, tea sets, and Buddhist icons.

Food vendors line the main drag with booths and pushcarts, offering eye-catching snacks unfamiliar to Westerners: Kkultarae (a traditional candy made before your eyes by spinning honey into silky-white strands); hodugwaja (bite-size, walnut-shaped cakes made to order in a contraption similar to a waffle iron); and jipangyi (long J-shaped tubes of puffed corn batter, pumped full of soft-serve from both ends and eaten in a manner that bears more than a passing resemblance to fellatio—you’ll never see more photos taken, or hear more giddy cross-cultural laughter, over ice cream than in Insa-dong).

Insa-dong is also an ideal spot to enjoy authentic local versions of the Korean meals most familiar to Americans: sizzling bibimbap with its kaleidoscope of colorful shredded vegetables and meat over rice, satisfying bowls of spicy noodles, and thin slices of meat, barbecued on tabletop burners in one of the dozens of restaurants in the golmok (alleys) off the main street. The quality is uniformly high and prices consistently run about $20 a head for a large meal, including an array of complementary side dishes called banchan, so don’t stress out over picking the ‘right’ restaurant for this standard fare in Insa-dong.

That said, the neighborhood is also home to some of the most elaborate ultra-traditional Korean restaurants in town, serving fixed multi-course tasting meals which, at $50-$100 (including tax and tip), offer a remarkable experience at prices far below what you’d find for a similar price in most world capitals.

We settled onto floor cushions around a low table in our own private dining room at timbered, hut-like Nwijo for a procession of rustic but elegant little dishes incorporating dozens of locally foraged herbs and vegetables. Pumpkin soup, steamed abalone, fermented skate, and acorn jelly (looks like caramel, tastes like dirt) would never be our choice of everyday fare, but provided a fascinating cultural adventure.

Another unusual and thoroughly enjoyable plunge into Korean culture took place at the Siloam Sauna a jimjimjilbang or public bath. Set any ideas about gay-centric Western baths aside when you visit a Korean bathhouse. These are cheerfully sociable gathering places for multiple generations of middle-class locals. In the men’s bathing section, amid smiling grandfathers, fathers, and grandsons, John and I hopped in and out of pools of varying temperatures, under pounding back-massage jets, and into sauna and steam rooms. It’s a very different concept of family fun than, say, a Disney matinee, but once you get over any initial shyness and let go of any sexual preconceptions, it’s a wholesome, if slightly mind-boggling, experience. In addition to single-sex bathing areas, Siloam offers several stories of co-ed leisure spaces, from a ping-pong area to detoxification rooms with walls encrusted in mineral crystals.

While LGBT life is not yet as open in Seoul as in major western cities, Korea’s role in the global business world has helped drive burgeoning gay visibility at home.

Raymond Hahn a gay Korean-American photographer and videographer who first arrived in Seoul as a Fulbright scholar in 1997 remembers, “Ten and even five years ago, we had far fewer businesses catering to the gay community, but gay life has been steadily evolving and growing.”

While there are no laws against homosexuality in Korea, Confucian cultural tradition and longstanding social mores have traditionally led most LGBT Koreans to remain closeted at work and in family life, and to marry opposite-sex partners.

When he first moved to Seoul, Hahn explains, there was a sense of secrecy to gay life that led many gay Koreans, even as they started to inch out of the closet, to find a single place they felt safe being gay and stick to it.

At the time, the center of gay nightlife in Seoul was the Jongno neighborhood and the typical gay venue capitalized on the inclination to discretion by charging a high entry fee, which covered food and multiple drinks.

This payment structure essentially locked patrons into a single venue for the evening, giving them a sense of hidden-away security, but also putting a damper on bar hopping, which can help create a sense of visibility and geographical turf for LGBT people.

The expense also made it difficult for younger gays to go out, socialize, and begin to build a community. The first gay bars in Korea were patronized largely by married men, committed to keeping each others’ secrets and fitting into traditional Korean family patterns.

Over the past decade, says Hahn, “lots of Korean gays have had a chance to travel to Western countries and to other places in Asia, particularly Thailand, where attitudes about being gay are much different. And straight Koreans who travel are also exposed to different perspectives in other parts of the world. Gradually, that makes its way back here.”

In a 2013 Gallup Poll, Korea showed the greatest shift in attitudes toward homosexuality among 39 countries surveyed: 39% of Koreans said that they felt homosexuality should be accepted by society vs. 18% just six years earlier. Among younger generations, the evolution in attitude seems even clearer: while only 16% of Koreans over 50 share this sentiment, 71% of the population between 18-29 agrees that being gay is okay.

“The Itaewon neigborhood where I live,” says Hahn, “now has dozens of gay nightlife venues in the area known as Homo Hill.” Part of the reason for this concentration of LGBT businesses, he explains, is that Itaewon has long been a popular neighborhood for foreign expats living in Seoul. It’s also adjacent to a major American military base.

Accompanied by Raymond and a posse of his friends from around the world, John and I had a whirlwind night of club hopping in Homo Hill (the nickname, used by gays and straights alike, carries no sense of the pejorative).

The most popular and longest running dance club, Pulse, is also one of the easiest to navigate if you are not accompanied by a Korean speaker, as many patrons and most of the staff speak English. The music leans toward pop, and the club centers around a glowing violet bar. 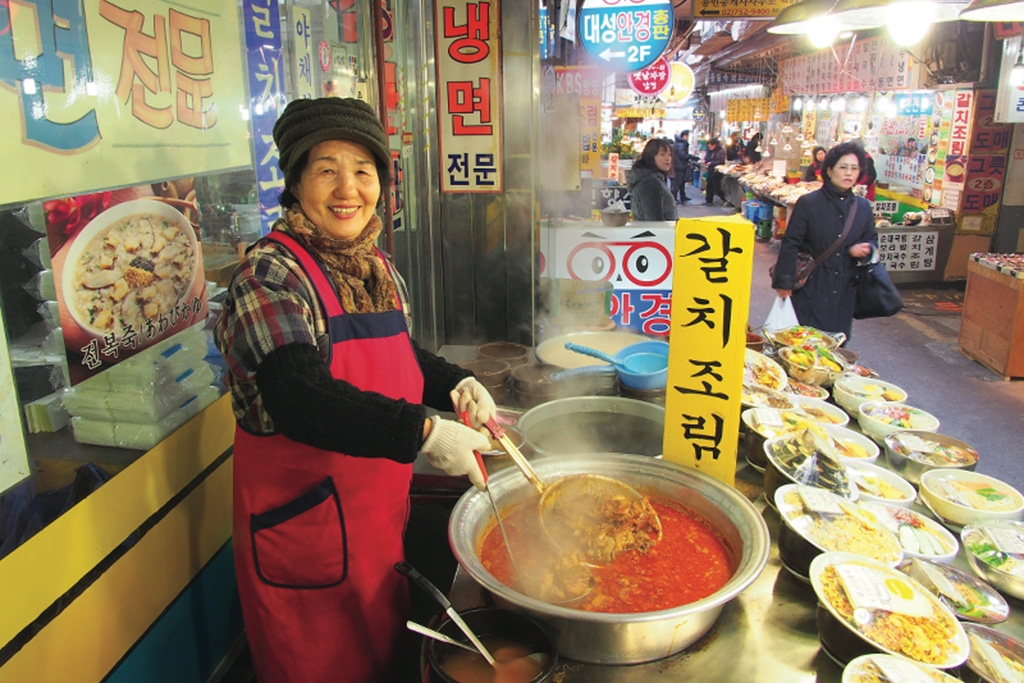 For a break between dance floors, the Almaz cocktail lounge feels like the lobby of a high-end brothel. Alternately, as much to snag a souvenir coaster as to soak up booze with the chicken wings and mozzarella sticks (ah! Global cuisine!), check out the felicitously named Eat Me, where the kitchen is open into the early morning hours.

Virtually every bar and club is open until dawn on Fridays and Saturdays, as many Koreans still only get to ‘be gay’ during weekend nightlife, away from work and family. There’s an air of gleeful freedom to the nightlife here that, for better and for worse, is distinctly different from the blasé attitude found on many an American dance floor.

Our favorite Itaewon nightspot was Le Queen, a plush little subterranean room featuring huge talent on a tiny stage. Starting after midnight, a series of terrific comical drag queens (picture a green-haired Korean housewife singing tunes from Dreamgirls) and male dancers (when was the last time you saw tap dancing in an American gay bar?) put on a series of performances and then joined patrons on the dance floor.

In addition to Itaewon, the Jongno neighborhood remains a hub of gay life, having evolved to the point where there are no longer high cover charges at most bars, but patrons tend to be slightly older, and speak significantly less English, than in Homo Hill establishments. Jongno bars with English-speaking staff include Blood G and Shortbus. If you happen to have a Korean-speaker among you, one of the most unique Jongno experiences are the small tented gay restaurant/bars called pojongmacha that are put up and taken down each night. The scene inside is like a little dinner party, with female cooks often trying to match-make the single male customers.

Not surprisingly, in a country where popular culture is a driving economic force, the entertainment industry is helping to advance gay visibility. An increasing number of positively portrayed gay characters have appeared in Korean film and television over the past decade. Last year the popular Korean film director Kim-Jho Kwang-soo and his partner publicly held a gay wedding ceremony, which carries no legal weight in Korea, but was still viewed as a cultural milestone for the openness of such a well-known figure.

Several thousand people also participate in Seoul’s annual pride parade. This year, months after the ferry capsizing that killed hundreds of Korean school children, right-wing Christian groups petitioned the government to cancel the pride parade, using the excuse that it was too festive an event for a country that should be in mourning.

In the end, Raymond Hahn told me in a recent phone call, the June parade was held, with the government sending out hundreds of police to keep Christian protesters from interfering with the celebrants.

“You know, in Korea,” Hahn joked “Lots of the riot police are handsome young guys doing their mandatory government service. Out there in their uniforms, they seemed to be protecting the gays from the protestors.”

It almost felt like the government was joining the parade.