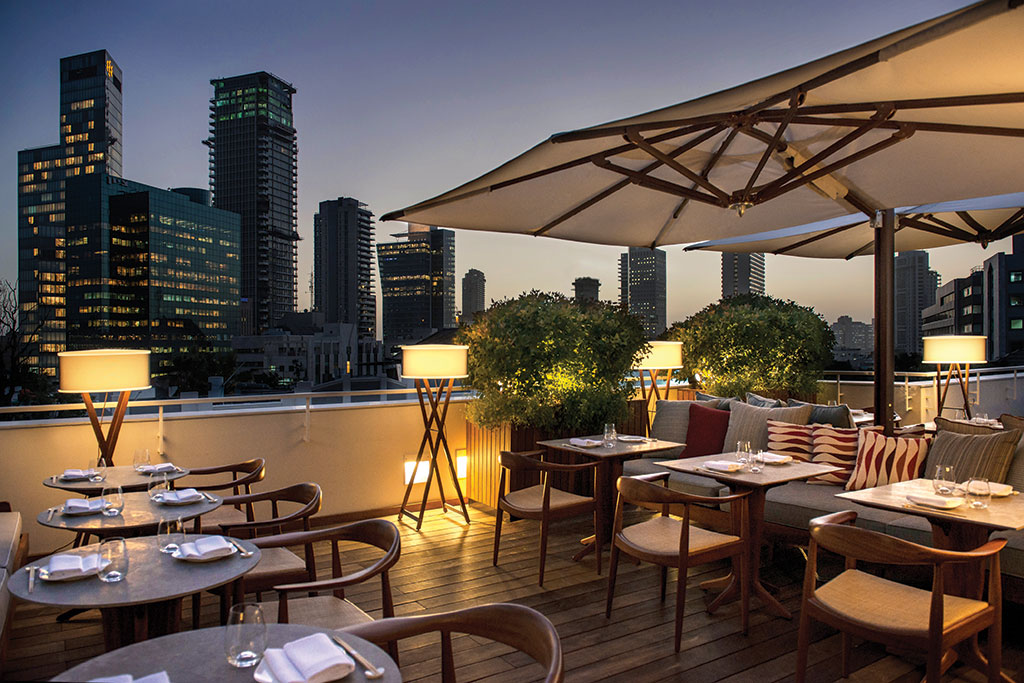 There is so much more than hummus to enjoy in this delectable Mediterranean city.

BINDELLA
Solidifying its place as a global dining destination, Tel Aviv recently welcomed the first outpost of Bindella, a Swiss-based, family-run restaurant group. Bindella oversees 40 different Italian restaurant concepts through-out Switzerland. The youngest son, Christian, moved to Tel Aviv in 2010, and it was his passion for Italian cuisine and love for his new-found home that inspired the restaurant’s Israeli opening.

Designed by architect Pitsou Kedem and Baranowitz-Amit Design Studio, Bindella offers a sleek, modern concept, featuring a skeletal interior, mid-century chairs in blonde wood, assorted pendant fixtures that hover at various lengths over a bar that spans the length of the restaurant, and a live DJ driving home an appetizing beat that seems in sync with the trendy crowd. Supporters of the LGBT community, Bindella opened its doors earlier this year for a special visit from 2014 Eurovision winner Conchita Wurst and an entourage of more than 50 international gay and lesbian journalists, bloggers, radio hosts, and television personalities. 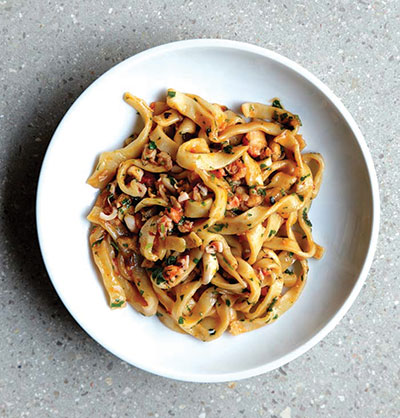 Head Chef Roy Soffer oversees Bindella’s menu. With more than 20 years of restaurant experience that spans from Tel Aviv to the Far East and New York City, Soffer com- mands a sophisticated five-part menu. The first section, Crudo, presents thinly sliced meats and seafood options, as well as veg- etarian options such as the house salad, composed of iceberg, arugula, marinated pumpkin, kohlrabi, and almonds. Hot first courses compose the second section with must-haves such as open ravioli with king crab. The third section focuses on the art of pasta with modern twists such as tagliatelle with smoked goose breast and homemade agnalotti. The fourth section is dedicated to fish (mushroom-crusted drum with truffle oil is a must), while the fifth section’s grand finale delivers various proteins like baby- back ribs agradolce with a sweet-and-sour red wine glaze. Wine options abound, with many sourced from Bindella’s own Tuscan vineyards. Montefiore 27. Tel: +972-03-650-0071. www.bindella.co.il/en

THE NORMAN HOTEL
While many hotel restaurants simply exist to offer obligatory breakfast or simple offerings for the business traveler, The Norman is a destination worth seeking out worldeats for its highly rated, rooftop restaurant, Dinings. The five-star hotel opened in December 2014 with rave reviews for its preservation and reinterpretation of Bauhaus architecture, where guests can appreciate original Israeli art compiled by an in-house curator, private-label bath amenities, plush linens, and technology-driven rooms and suites. To offer something unique to guests as well as locals, the hotel opted for Executive Chef Masaki Sugisaki’s new style of izakaya (Japanese tapas), which has earned top Zagat ratings at its original London location. Chef Testuya Honda is on hand to meticulously execute the menu, which is as visually stimulating as the original works of art that appear throughout the hotel. 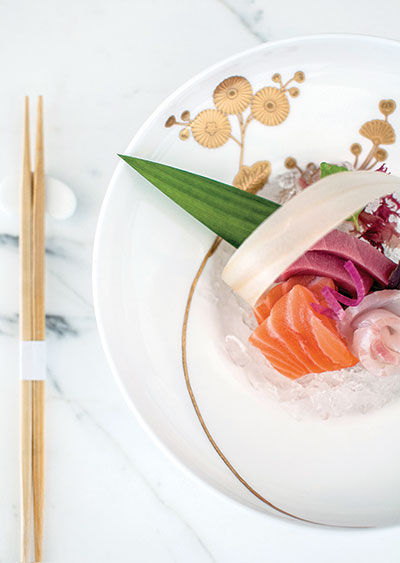 Though the menu is continually evolving, expect to experience modern juxtapositions of Japanese flavor profiles. Yellow tail sashimi appears with yuzu, lemon, garlic, and an enticing dollop of caviar; fried eggplant is broiled and finished with sweet miso; and fresh water eel is the vehicle for a sushi roll that receives the royal treat- ment with delicately seared foie gras and a gentle brush of sweet soy. Fine dining (even though the atmosphere is decidedly casual) doesn’t come cheap so prepare to invest in the evening. The newly launched lunch menu offers a more budget-friendly way to experience the exquisite cuisine, where diners can choose from 40-day dry-aged beef donburi, sushi and sashimi platters, or a tasting menu that includes a selection of raw fish, tempura, beef shabu shabu, and black cod with sesame oil, garlic, and chili. Be sure to start (or end) your experience in the Library Bar, which offers a selection of craft cocktails set against 1940’s colonial-style furnishings.
23-25 Nachmini St. Tel: 800-398-8751. www.thenorman.com

WINE TOUR DAY TRIP
Recent excavations reveal that early forms of wine production existed in Israel’s ancient lands nearly 2,000 years before vines reached Europe, so if you’re looking for the original wine trail, a day trip from Tel Aviv to one of the nearby regions offers a can’t-miss opportunity to explore and sample the country’s current wine production—most of which doesn’t make it to the US. Tova Wald Boutique Travel (Tel: 646-757-1311. www.tovawald.com) offers customized wine tours to Israel’s four major wine regions: Golan Heights, Zichron-Ya’akov, Judean Hills, and Negev. Head to the heart of Zichron-Ya’akov on Mt. Carmel for a one-day tour. Derived from the name “Karem-El,” which translates to “God’s Vineyard,” Mt. Carmel is often referred to as the Tuscany of Israel.

The day begins on Mt. Carmel’s southern slopes at Tishbi Winery, which celebrates 30 years as one of Israel’s first boutique wineries. In addition to its wine portfolio, the vineyard also produces a 16-year-old single barrel-aged brandy, distilled using an original alembic brandy distiller form R. Prulho in France. After stops at Ramat Hanadiv memorial gardens and nature park and the charming mountaintop town of Zichron Ya’akov, participants head to Carmel Winery, Israel’s largest winery dating back to 1882. Chief Winemaker Lior Lacser leads a team of eight winemakers along with a team of viticulturists to produce a broad range of wines, but be sure to leave luggage space for single vineyard selections including Carmel Cabernet Sauvignon and Shiraz from Kayoumi Vineyard. 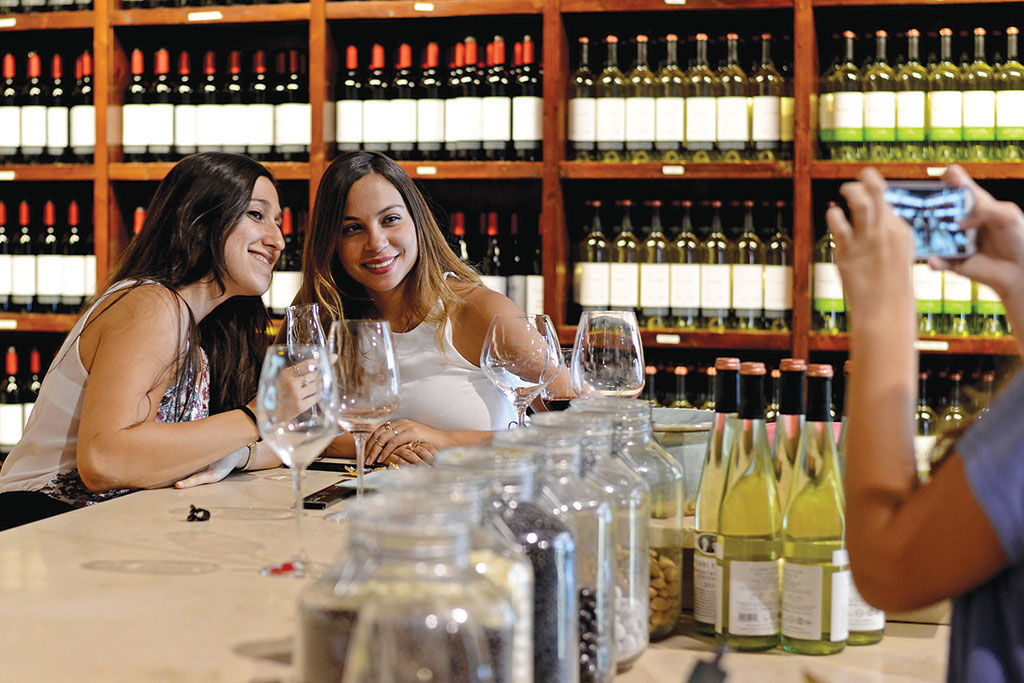 A visit to Somek Estate Winery reveals Old World–style wines and a must-have 2011 Carignan with notes of black fruit and dark chocolate. A final stop at Amphorae Wines reveals the results of artistic wine-making combined with environmentally friendly vineyard practices that include solar energy systems and a “green pool” water-filtration system. Amphorae’s 2008 Makura series (cabernet sauvignon, barbera, and blend) all received scores of 90 or higher from Robert Parker’s Wine Advocate.

The route back may include a stop at the Ancient Roman port city of Caesarea Maritima, which offers a rich perspective on Israel’s epic history through the centuries. Tel Aviv’s glistening lights reflect off of the Mediterranean Sea as dusk approaches, the only solace being that a new day, and more eating, will rise with the morning sun.