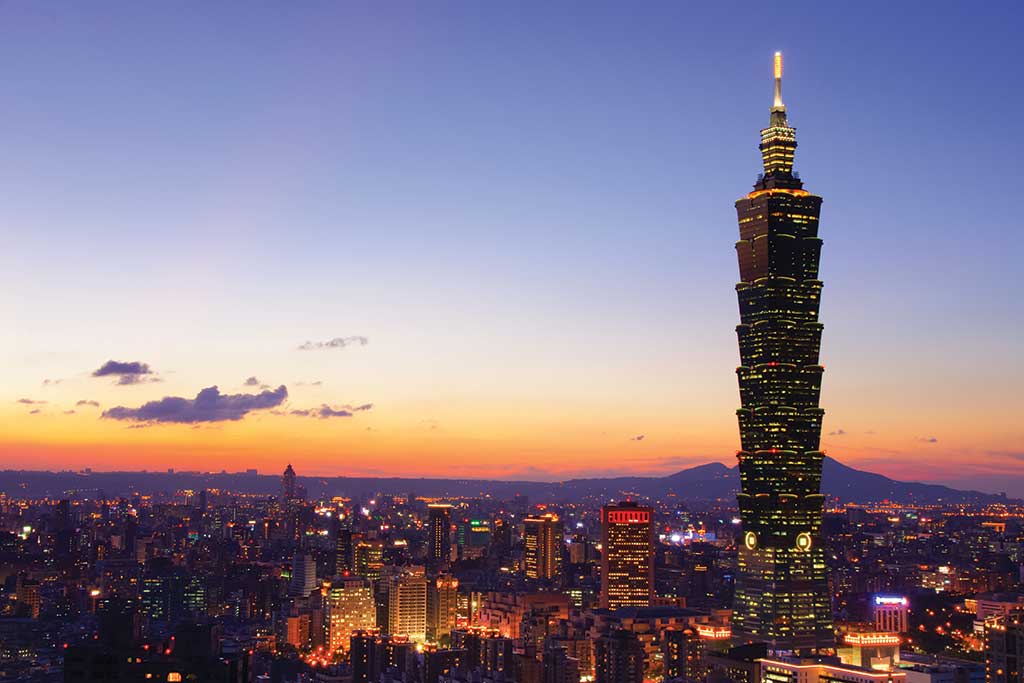 Taiwan’s oldest city and former capital until 1887, Tainan boasts many historical and cultural treasures, and is just under two hours south of Taipei by Taiwan High Speed Rail (note that Tainan’s THSR station is outside of the center, so you must continue by taxi or free shuttle bus, or you may prefer the slower and cheaper TRA train, which stops in central Tainan and takes from three hours and 30 minutes).

Conveniently located next to the railway station in the heart of the city, Shangri-La’s Far Eastern Plaza Hotel is an excellent choice for those arriving by train. With 38 floors, this cylindrical glass tower is Tainan’s tallest building, making it a landmark that stands head-and-shoulders over everything else. Its 336 guestrooms and suites are the largest in the city, with those on upper floors enjoying stunning, far-reaching views.

This five-star hotel is mannered and eff icient, with many amenities tailored to business travelers, but the outdoor heart-shaped swimming pool reaffirms the Shangri-La’s love for all its guests. Those wanting extra indulgence may upgrade to Horizon Club, where privileges include a higher standard of accommodation, personalized services, and access to the Horizon Club Lounge: an exclusive oasis where you can enjoy anything from gourmet breakfast to complimentary evening cocktails and appetizers.

Located on the hotel’s top floor is Shanghai Pavilion, a sleek fine din- ing restaurant serving authentic Huaiyang and Cantonese cuisine as well as regional Taiwanese specialities. Every plate was a delicious and harmo- nious work of art, from a clear chicken soup with hand-carved beancurd in the form of a delicate chrysanthemum flower to steamed local milkfish with chili pepper. The signature dish made the biggest impact: slices of tender pork belly layered together to form a monumental pyramid, filled with tangy homemade Hakka pickles—a delectable architectural triumph.

Tainan is famous for its temples, including the island’s first Confucian Temple. Dating from 1665, this serene temple complex dedicated to the great philosopher Confucius served as Taiwan’s first official chool. You’ll still see Tainan’s large student population coming here to pray, with the hopes of getting good grades. Enjoy a moment of quiet contemplation, and, afterward, refresh with shaved ice, condensed milk, and tropical fruit from the nearby Lily Fruit Store, a popular and traditional Tainan-style fruit stall established in 1947.

Another historic store worth visiting is Hayashi Department Store, which, when it first opened in 1932, was considered integral to a new era of Taiwanese style, fashion, and culture, but sadly this glorious era was to be short-lived. Damaged by American air raids during World War II, after the war it took on the mundane task of being offices for the Tai- wan Salt Factory. It wasn’t until 1998 that a proposal was made to restore the building to its former use and glory.

Reopen since 2013, it’s once more a show-case of the best of Taiwanese and global design. The first floor foodhall sells Taiwanese teas, sweets, and other edible goodies, with upper floors carrying creative handicrafts, gifts, fashion, and accessories. Those reaching the top floor can reward themselves with a delicious cone of brown sugar ice cream served with a salted pretzel-like breadstick from the rooftop café and sake bar.

Tainan has a lively and famous night market, but I instead recommend Cheng Hsing Street. This small street has numerous informal-style restaurants and is currently a dining hotspot with locals. Nearby Shennong Street is often considered the best-preserved street in Tainan. Rather than being an echo of the past, the traditional buildings that line this narrow pedestrian-only street are home to stylish bars and creative shops. Although none are specifically gay, these cool venues attract young and hip locals of all sexual preferences. If you’re seeking an exclusively gay environment, the best option in Tainan is Green House, a large and popular gay sauna.

Finally, no trip to Tainan would be complete without heading out to the suburbs to Ten Drum Culture Village. Like similar projects in Taipei, here a disused sugar refinery has been restored and reinvented as a new cultural landmark. What’s unique about this place is that it’s home to the Grammy Award–nominated Ten Drum Art Percussion Group. Visitors enjoy a loud and energized twice-daily performance from the talented, world-renowned musicians.

Accompanied by video and lighting effects, the drummers demonstrate their breathtaking drumming dexterity, speed, skill, and stamina. I read that Ten Drum performers must be capable of striking 150 to 180 beats per minute for several minutes at a time, while at the same time maintaining a posture that would challenge a gymnast. The toned, shirtless performers I saw definitely had the physiques of gymnasts.

Afterward, visitors may join a rudimental percussion class, to learn a lesson on how to bang your own drum. You may also visit the “drum fac- tory” to watch artisans work on drums of all shapes and sizes, tightly stretching water buffalo hides over wooden drum cases. There are also ecological trails, a café-bar, and a craft and design shop.

If this is a typical example of what “Made in Taiwan” means today, then that label is surely setting a new standard. 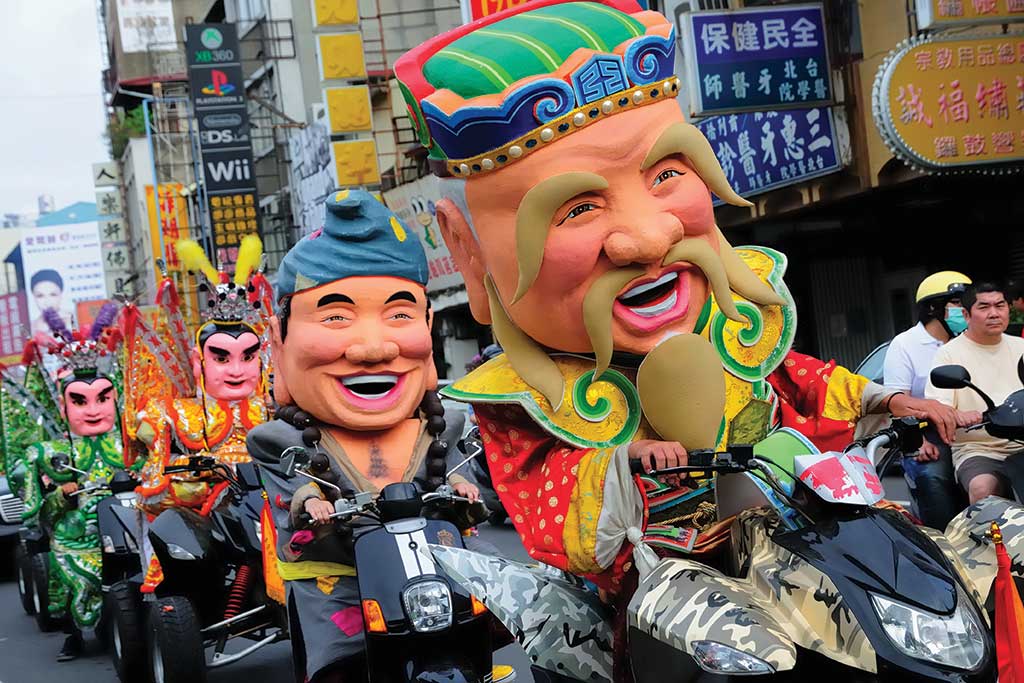 XOXO, No 66-1, Yanji Street, Da’an District, Taipei City. A new addition to Taipei’s gay bar scene, this large and stylish venue opened in October 2014. It attracts a young and hip crowd of gay men and their friends. www.facebook.com/taipeixoxo

National Palace Museum, No. 221, Section 2, Zhishan Road, Shilin District, Taipei City. This vast museum is home to the world’s premiere collection of Chinese art. The collection came from the Palace Museum in Beijing’s Forbidden City, evacuated during the Chinese Civil War, and has remained here ever since. Crowds come here to see treasures including the famous jadeite cabbage. www.npm.gov.tw

ATTRACTIONS
Hayashi Department Store, No. 63, Section 2, Zhongyi Road, Tainan. Dating from 1932, this historic department store reopened in 2013 after an extensive refurbishment, and is once again a hub of Taiwanese style, fashion, and culture. After shopping for gifts and goodies, head to the top floor to enjoy anything from a glass of sake to a cone of brown sugar ice cream. www.hayashi.com.tw